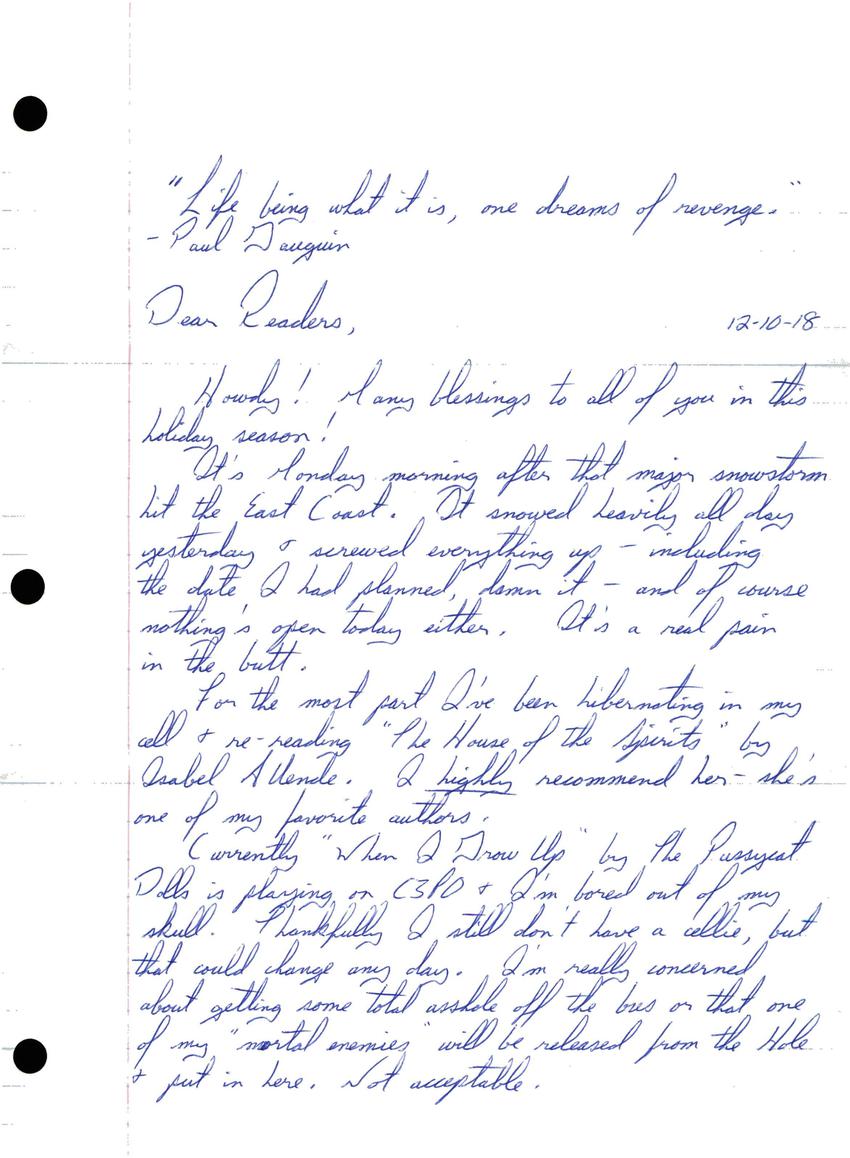 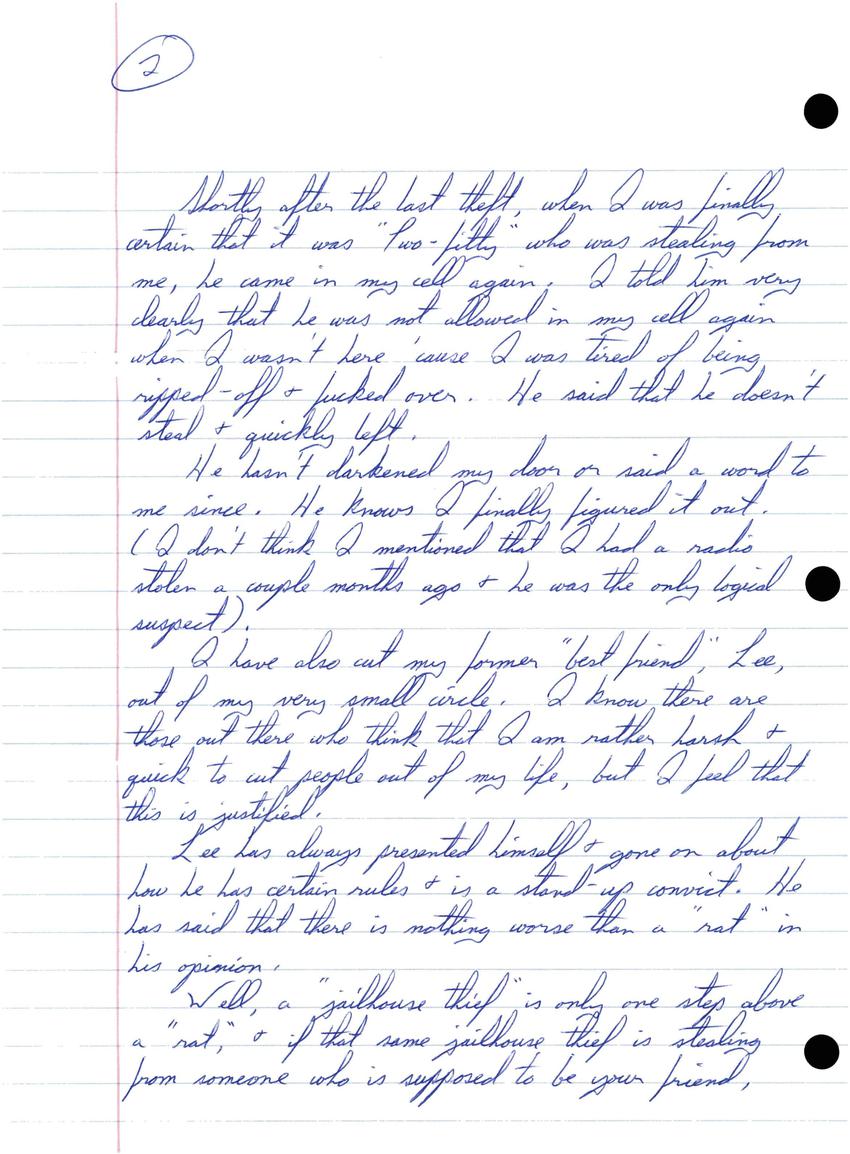 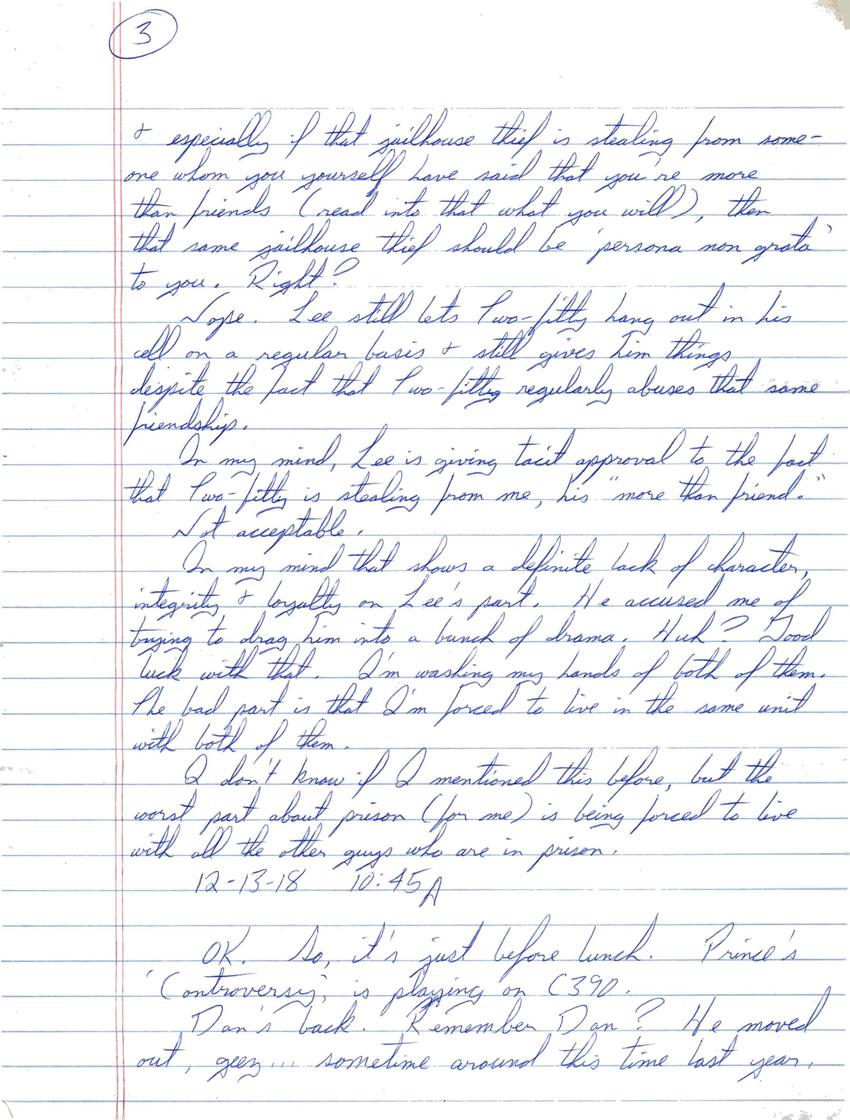 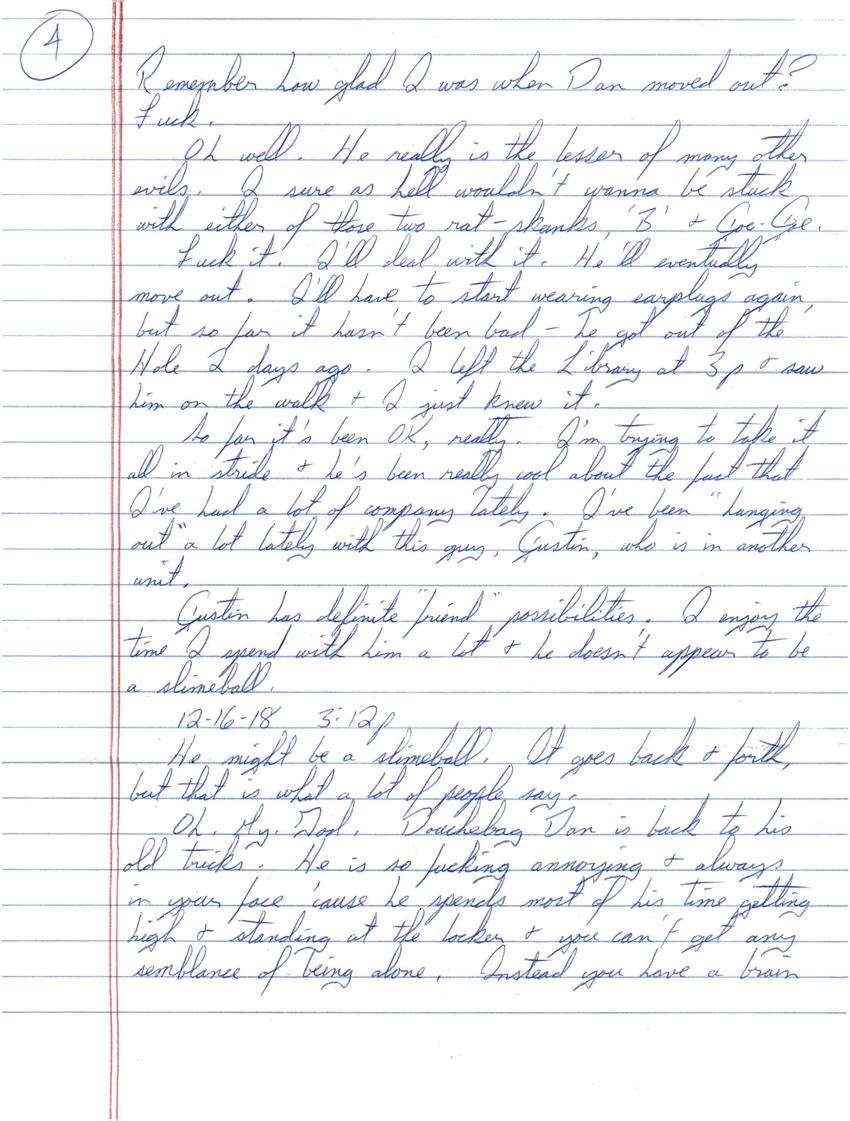 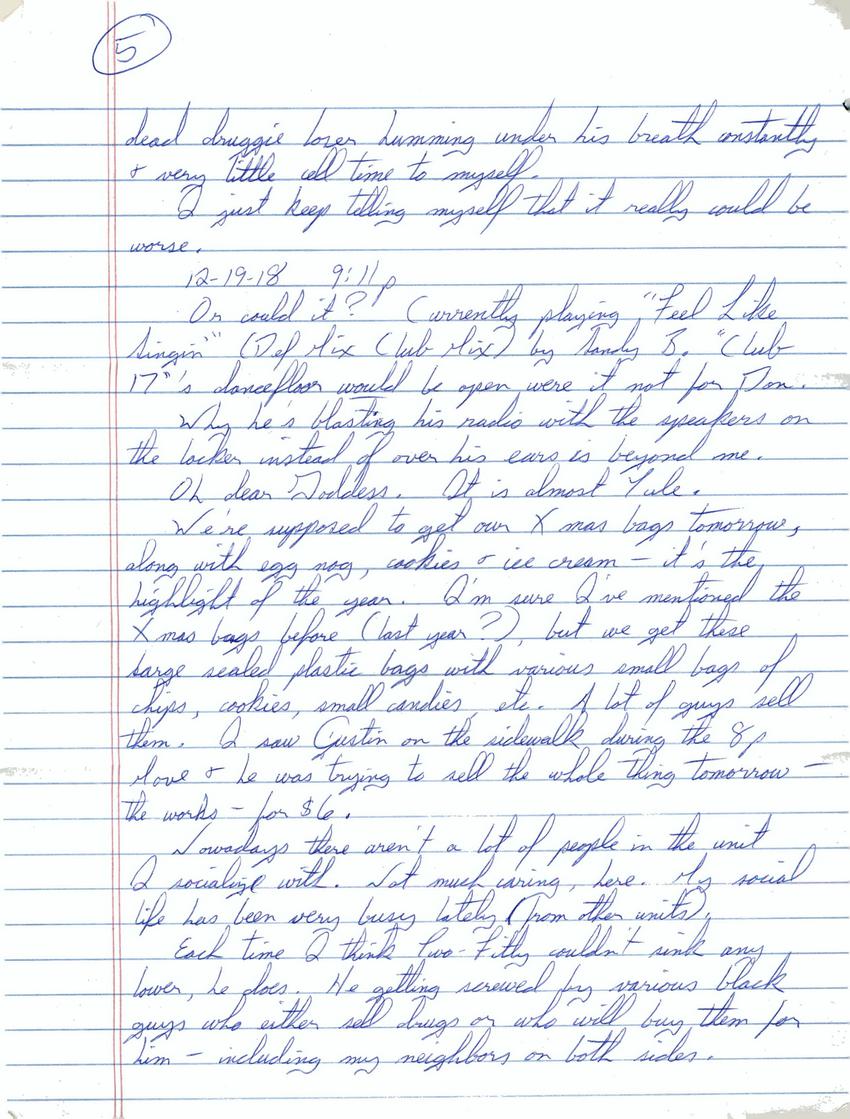 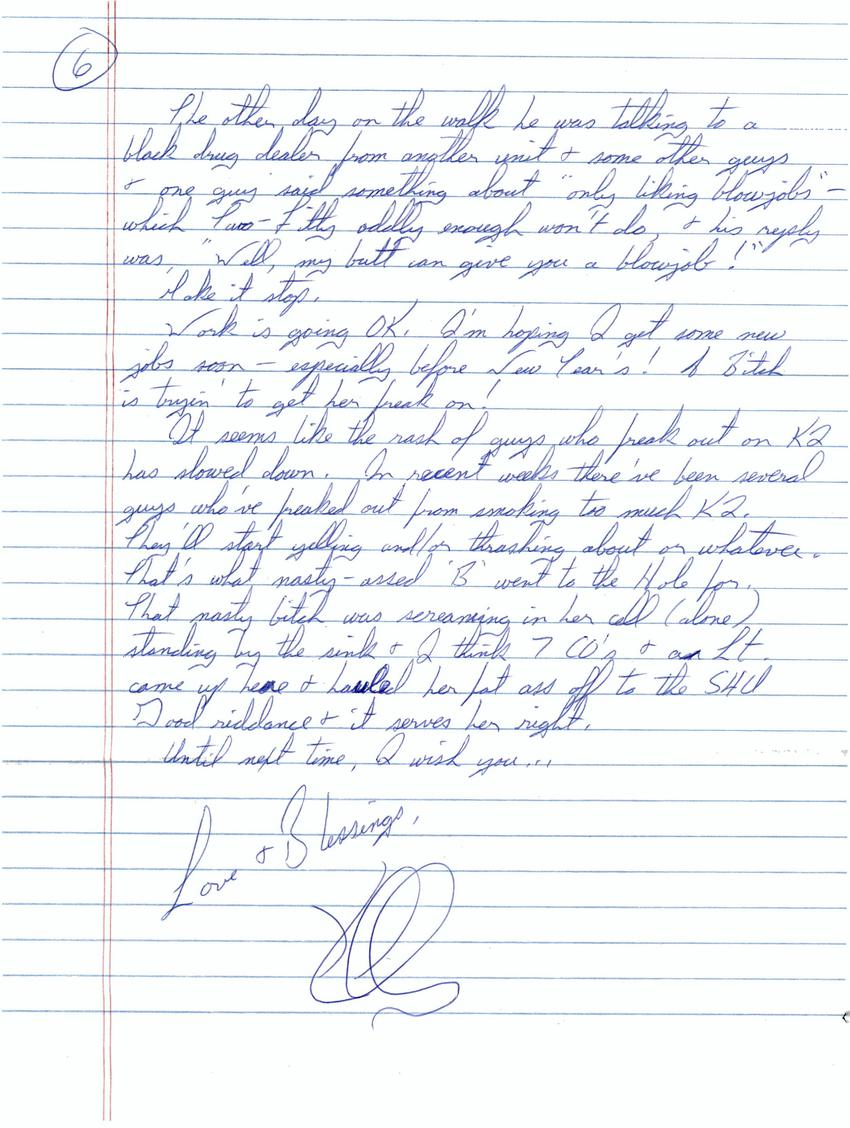 "Life being what it is, one dreams of revenge."
—Paul Gauguin

Dear Readers,
Howdy! Many blessings to all of you in this holiday season!

It's Monday morning after that major snowstorm hit the east coast. It snowed heavily all day yesterday and screwed everything up—including the date I had planned, damn it—and of course, nothing's open today either. It's a real pain in the butt.

For the most part, I've been hibernating in my cell and rereading The House of the Signits by Isabel Allende. I highly recommend her. She's one of my favorite authors.

Currently When I Grow Up by the Pussycat Dolls is playing on C3P0, and I'm bored out of my skull. Thankfully, I still don't have a cellie, but that could change any day. I'm really concerned about getting some total asshole off the bus on that one of my mortal enemies will be released from the hole and put in here. Not acceptable. Shortly after that last theft, when I was finally certain that it was Two-fifty who was stealing from me, he came in my cell again. I told him very clearly that he was not allowed in my cell again when I wasn't here 'cause I was tired of being ripped off and fucked over. He said that he doesn't steal and quickly left.

He hasn't darkened my door or said a word to me since. He knows I finally figured it out. I don't think I mentioned that I had a radio stolen a couple months ago and he was the only logical suspect.

I have also cut my former best friend Lee out of my very small circle. I know there are those out there who think I am rather harsh and quick to cut people out of my life, but I feel that this is justified. Lee has always presented himself and gone on about how he has certain rules, and is a stand-up convict. He has said that there is nothing worse than a rat in his opinion.

In my mind, that shows a definite lack of character, integrity, and loyalty on Lee's past. He accused me of trying to drag him into a bunch of drama. Huh? Good luck with that. I'm washing my hands of both of them. The bad past is that I'm forced to live in the same unit with both of them.

I don't know if I mentioned this before, but the worst part about prison (for me) is being forced to live with all the other guys who are in prison.

Okay, so it's just before lunch. Prince's Controversy is playing in C3P0.

Dan's back. Remember Dan? He moved out, jeez. Sometime around this time last year. Remember how glad I was when Dan moved out? Fuck.

Oh well. He really is the lesser of many evils. I sure as hell wouldn't wanna be stuck with either of those two rat-skunks, B, and Gee Gee. Fuck it, I'll deal with it. He'll eventually move out. I'll have to start wearing earplugs again, but so far it hasn't been bad. He got out of the hole two days ago. I left the library at 3 PM, and saw him on the walk and I just know it.

So far, it's been okay, really. I'm trying to take it all in stride, and he's been really cool about the fact that I've had a lot of company lately. I've been hanging out a lot lately with this guy, Justin, who is another unit. Justin has definite friend possibilities. I enjoy the time I spend with him a lot, and he doesn't appear to be a slimeball.

He might be a slimeball. It goes back and forth, but that is what a lot of people say.

Oh. My. God. Douchebag Dan is back to his old tricks. He is so fucking annoying and always in your face 'cause he spends most of his time getting high and standing at the locker, and you can't get any semblance of being alone. Instead you have a brain dead druggie loser drumming under his breath constantly, and very little cell time to myself.

I just keep telling myself that it really could be worse.

Or could it? Currently playing Feel Like Singin' (Def Mix Club Mix) by Sandy B. Club 17's dance floor would be open were it not for Dan.

Why he's blasting his radio with the speakers on the locker instead of over his ears beyond me.

We're supposed to get our Xmas bags tomorrow, along with eggnog, cookies and ice cream. It's the highlight of the year. I'm sure I've mentioned the Xmas bags before (last year?), but we get these large sealed plastic bags with various small bags of chips, cookies, small candies, etc. A lot of guys sell them. I saw Justin on the sidewalk during the 8 PM move, and he was trying to sell the whole things tomorrow—the works—for $6.

Nowadays, there aren't a lot of people in the unit I socialize with. Not much caring, here. My social life has been very busy lately (from other units).

Each time I think Two-fifty wouldn't sink any lower, he does. He's getting screwed by various black guys who either sell drugs or who will buy them for him—including my neighbors on both sides.

Work is going okay. I'm hoping i get some new jobs soon, especially before New Year's! A bitch is tryin' to get her freak on!

It seems like the rash of guys who freak out on K2 has slowed down. In recent weeks, there've been several guys who've freaked out from smoking too much K2. They'll start yelling and/or trashing about on whatever. That's what nasty-assed B went to the hole for. That nasty bitch was screaming in her cell (alone) standing by the sink, and I think 7 COs and an Lt. came up here, and hauled her fat ass off to the SHU. Good riddance, and it serves her right.

You know I don't really think you're being too harsh with Lee, right? I think he's probably doing the best he knows how, but you don't need to defend cutting off a friendship (or more). That you think you'll be happier without him is enough of a reason on its own. Do what's best for you. :)
Sorry about your cellie. Distracting noise is one of the hardest things for me to deal with...
Happy holidays, take care.
Prison life is like living in a fish bowl. These things and situations might sound outrageous on the outside, but when you're stuck with people you do not choose to be around in a place you do not want to be in.... the small things seem like big ones. I have a tendency of cutting people out of my life at the first sign of betrayal... even just a whiff of betrayal and I'm already putting up my walls and cutting people out of my life. My advice to you, reflect on your relationships and feelings and actions. Your decisions are yours alone to make, and there's no need to apologize or explain yourself ( I get that this is a blog and that's kind of the purpose, but you get my drift? You are grown and don't have to answer to anyone about your feelings and relationships.) I hope you find peace in your surroundings; and find people that make you feel loved and happy and safe!
(scanned reply – view as blog post)
uploaded Feb. 9, 2019.  Original (PDF) 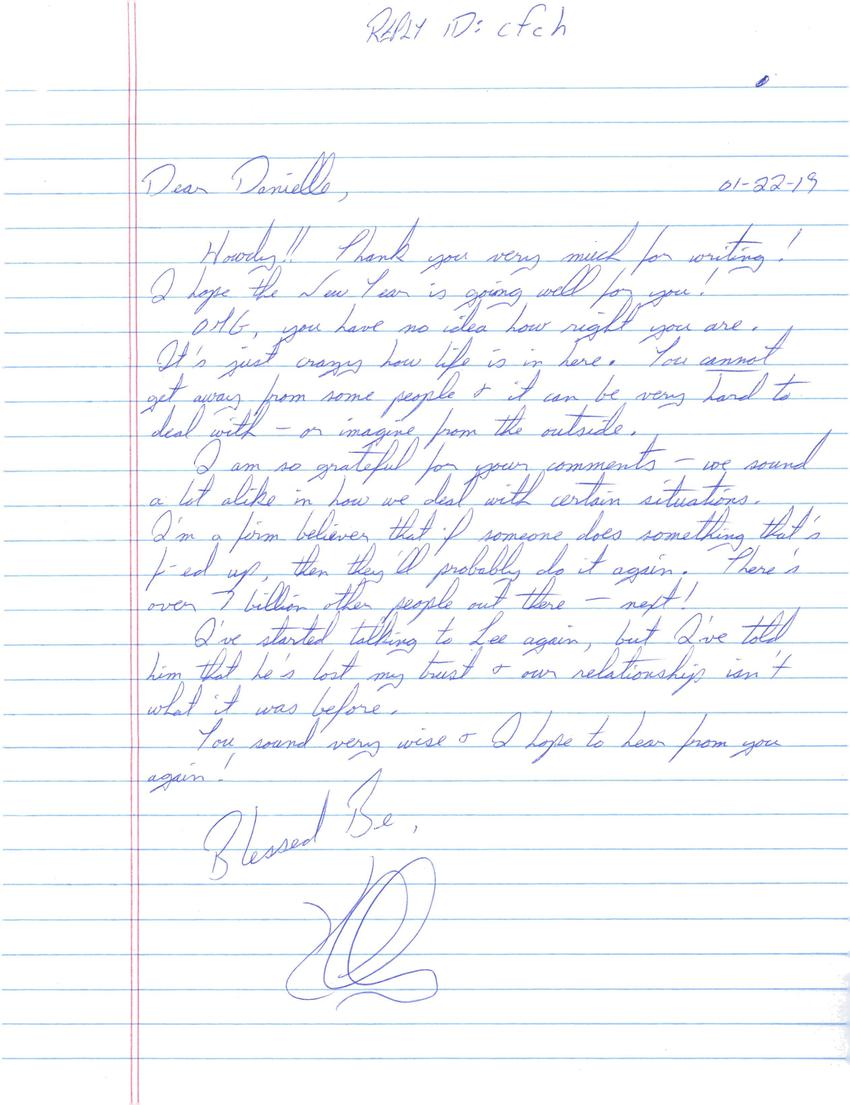 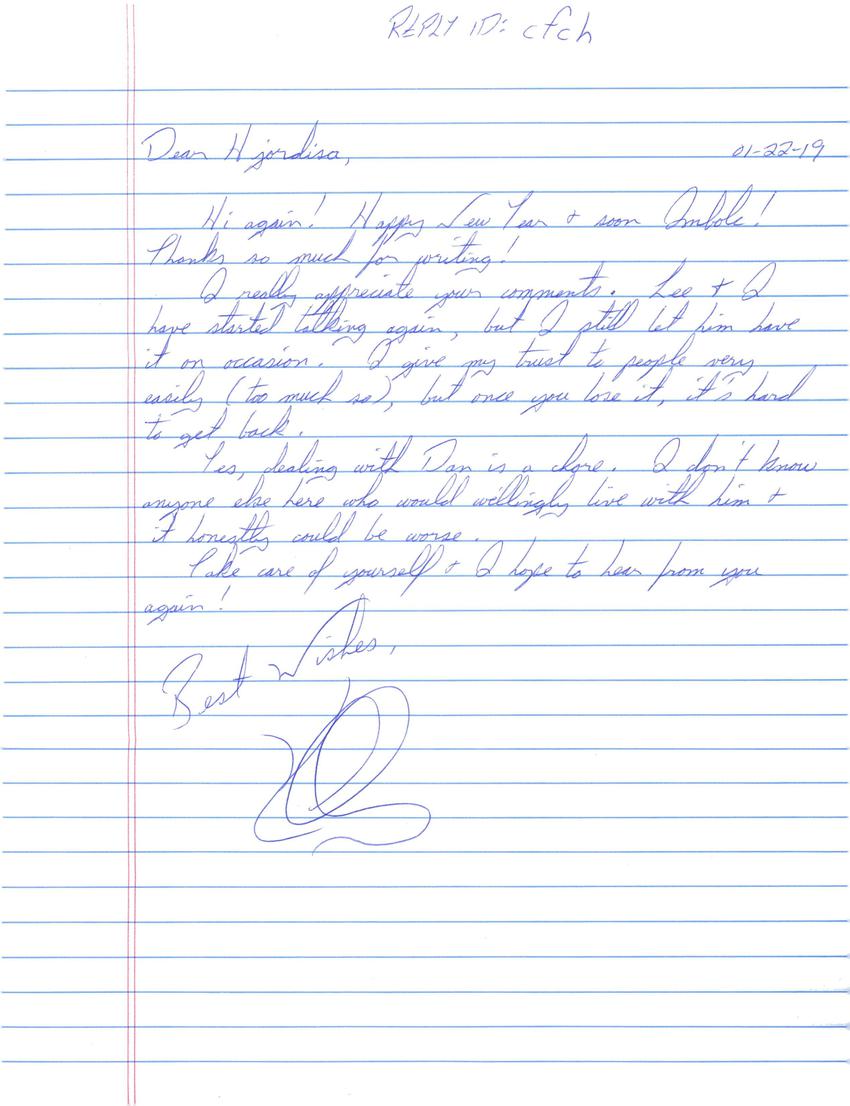