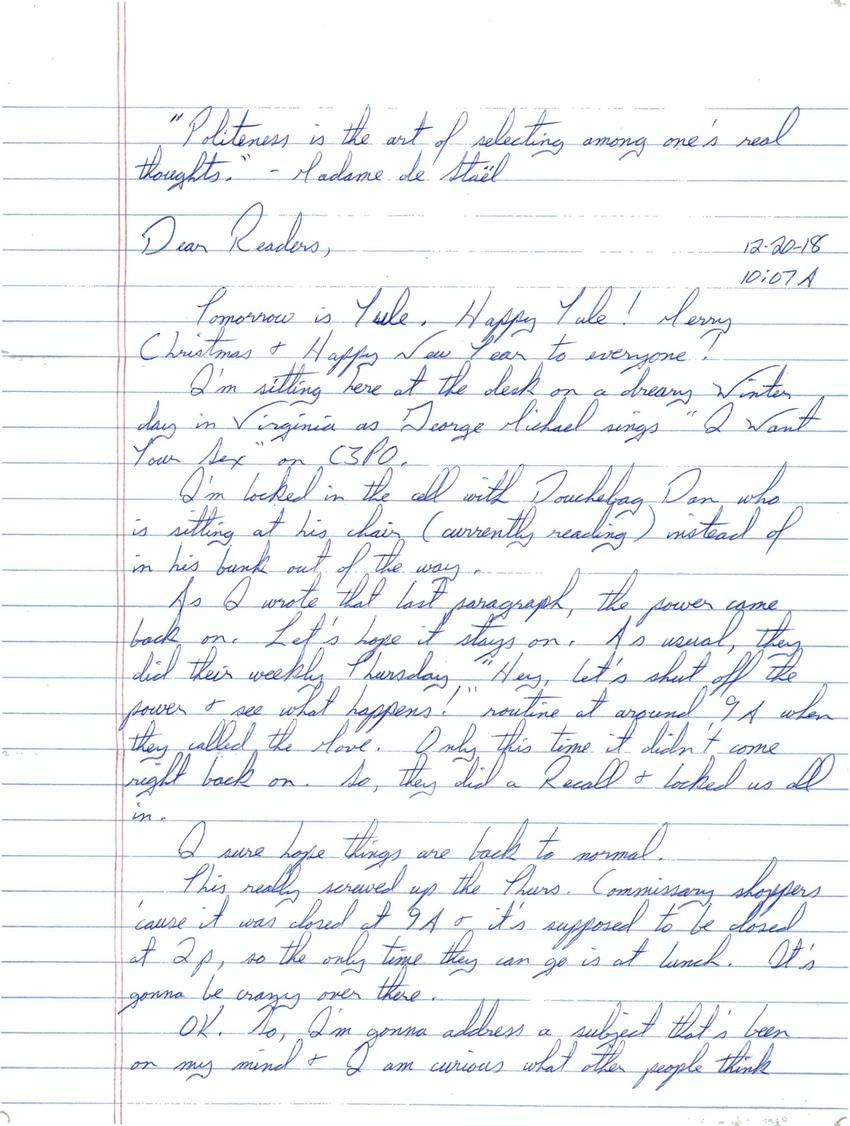 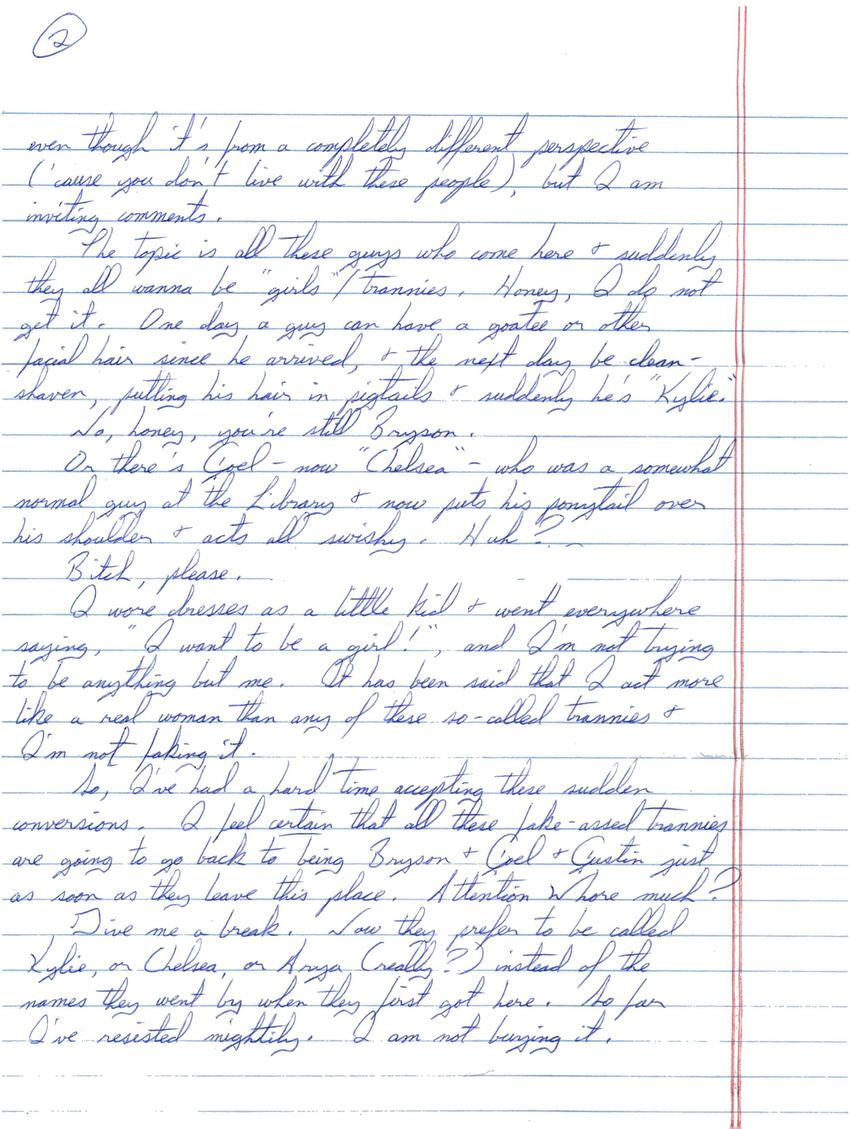 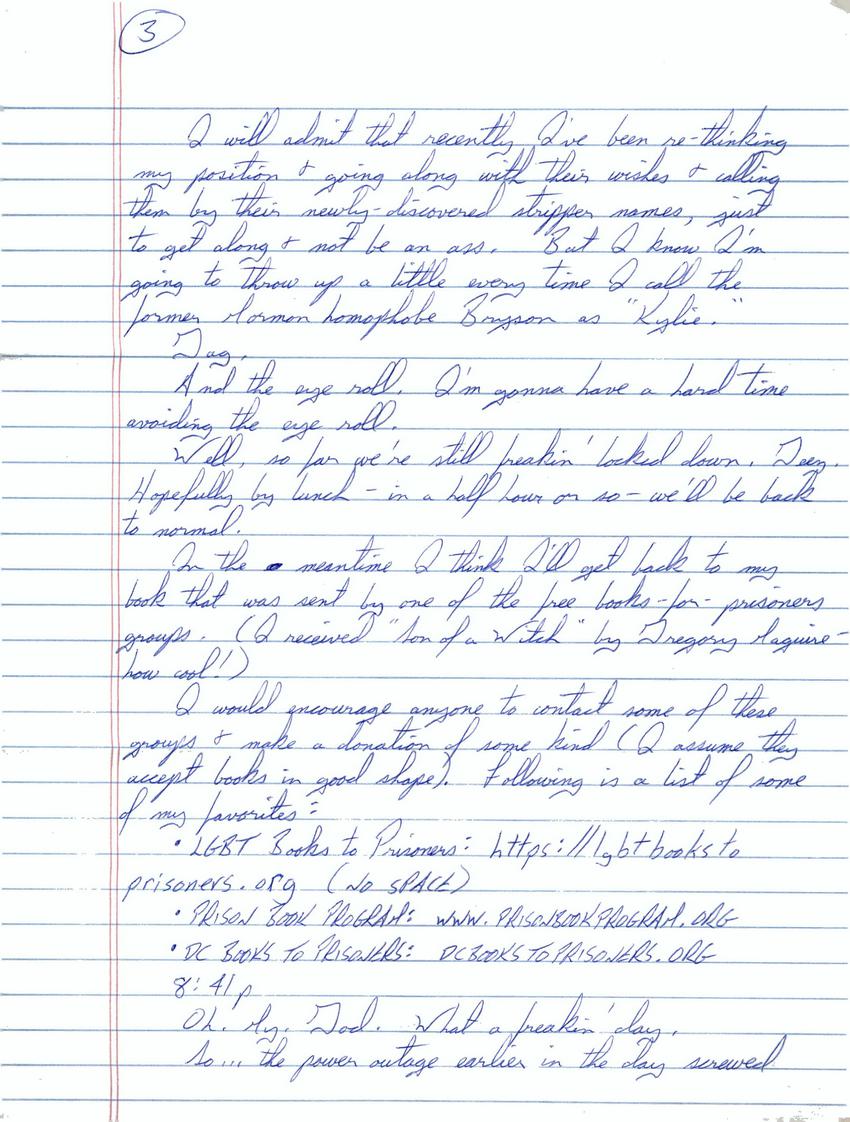 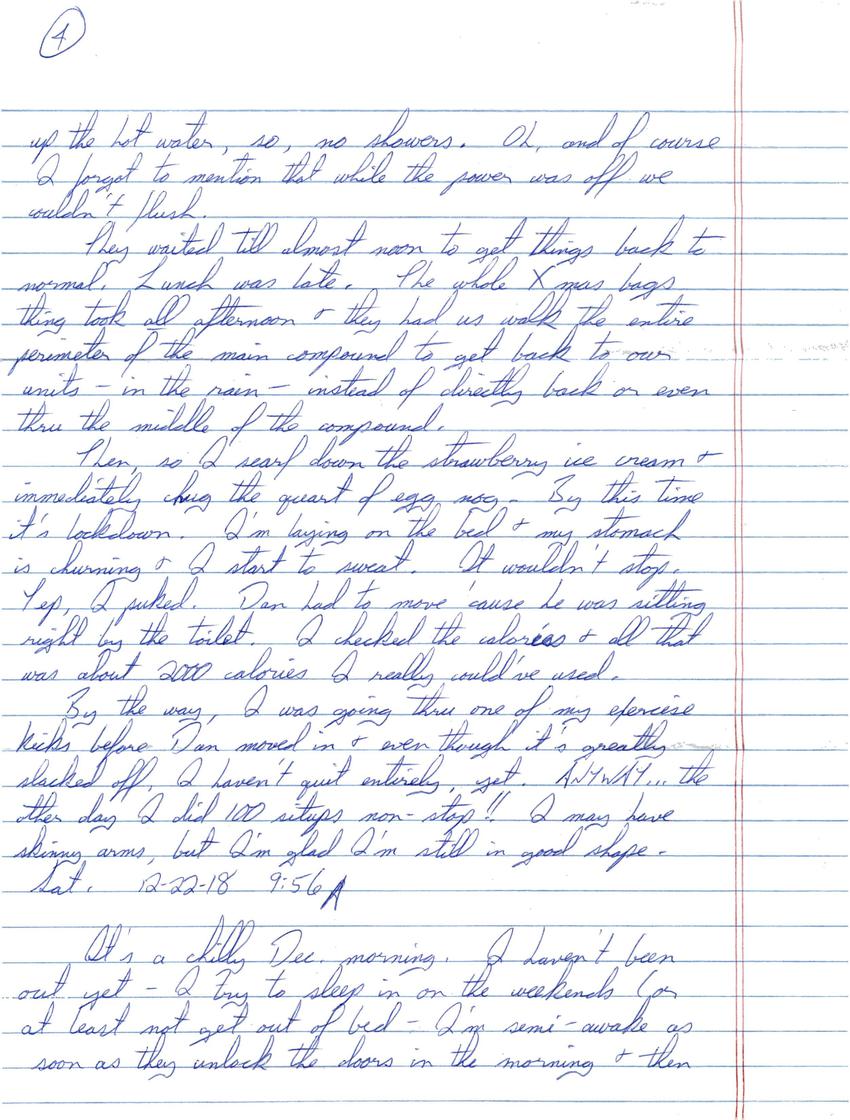 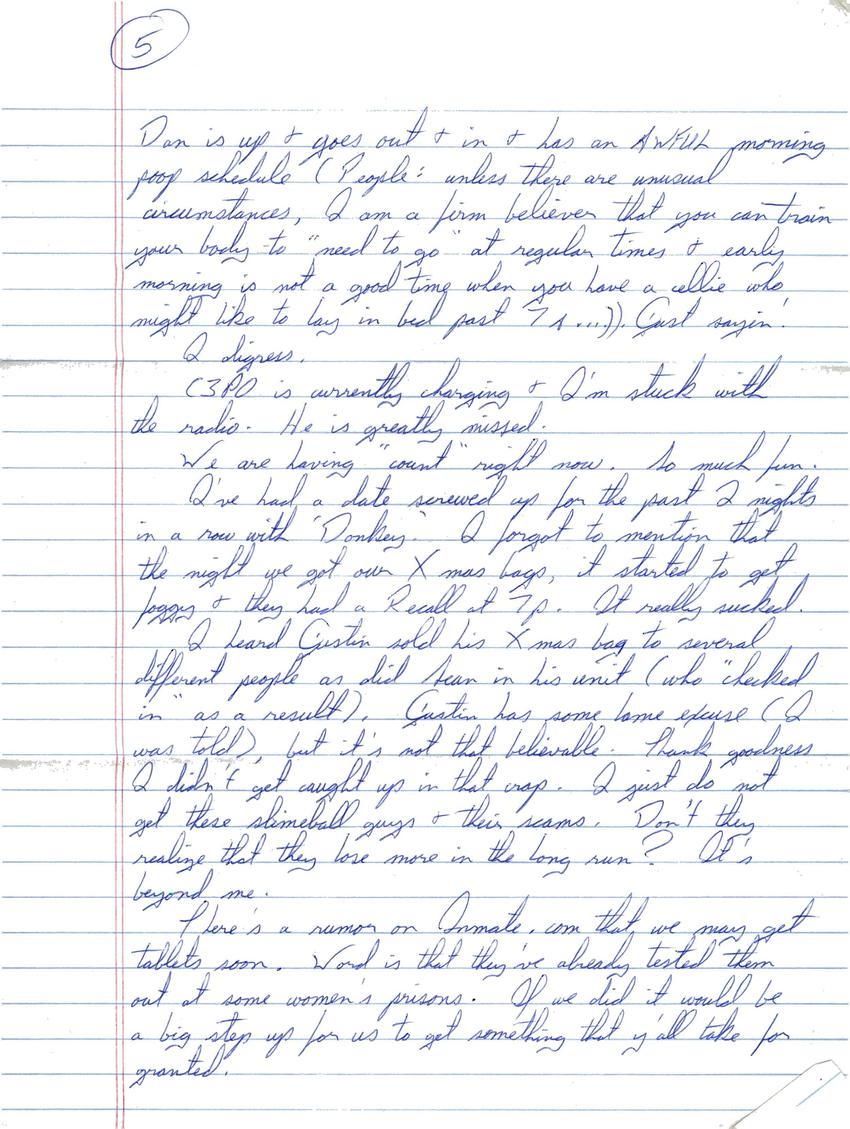 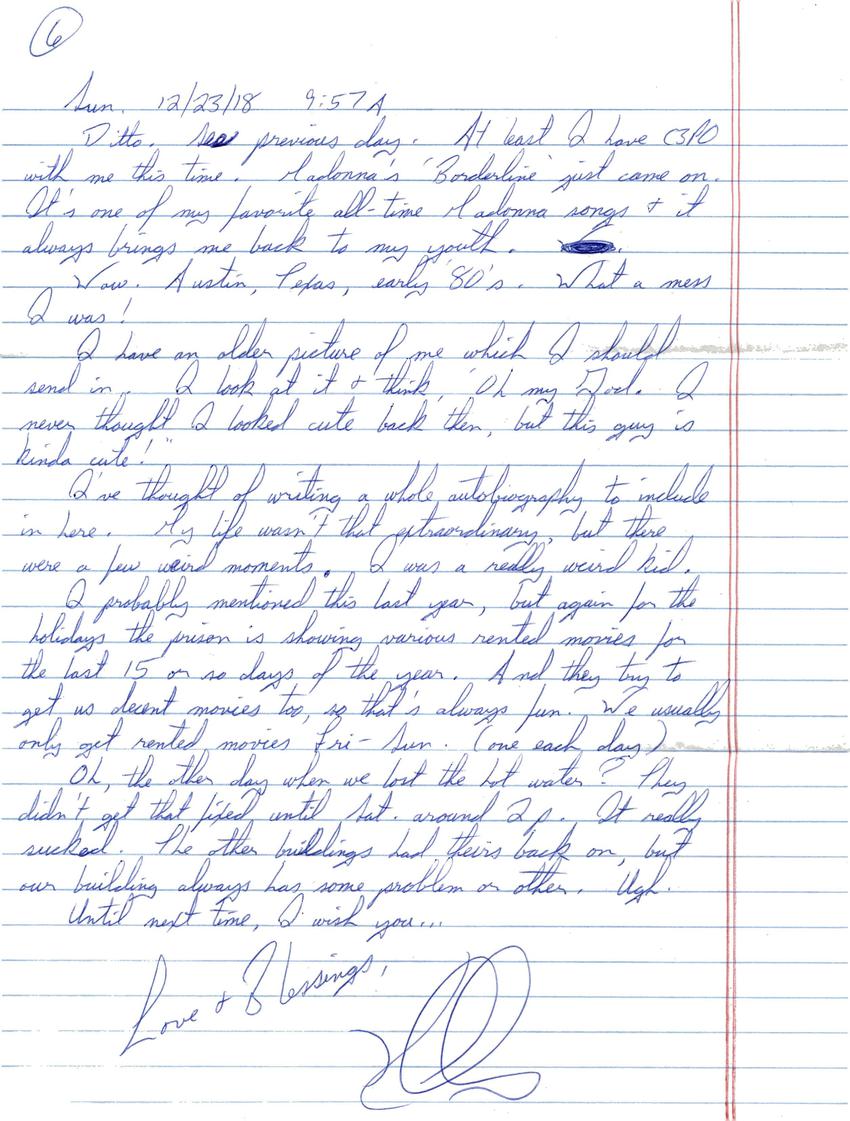 "Politeness is the art of selecting among one's real thoughts."
—Madame de Staël

Tomorrow is Yule. Happy Yule! Merry Christmas and Happy New Year to everyone!

I'm sitting here at the desk on a dreary winter day in Virginia as George Michael sings "I Want Your Sex" on C3PO. I'm locked in the cell with Douchebag Dan who is sitting at his chair (currently reading) instead of in his bunk out of the way.

As I wrote that last paragraph, the power came back on. Let's hope it stays on. As usual, they did their weekly Thursday, "Hey, let's shut off the power and see what happens!" routine around 9 AM when they called the Move. Only this time, it didn't come back on. So they did a recall and locked us all in. I sure hope things are back to normal.

This really screwed up the Thursday commissary shoppers 'cause it was closed at 9 AM, and it's supposed to be closed at 2 PM, so the only time they can go is at lunch. It's gonna be crazy over there.

Okay, so I'm gonna address a subject that's been on my mind, and I am curious what other people think, even though it's from a completely different perspective ('cause you don't live with these people), but I am inviting comments. The topic is all those guys who come here and suddenly they all wanna be "girls/trannies." Honey, I do not get it. One day, a guy can have a goatee or other facial hair since he arrived, and the next day be clean-shaven, putting his hair in pigtails, and suddenly he's Kylie.

No, honey, you're still Bryson.

Or there's Joel—now "Chelsea"—who was a somewhat normal guy at the library, and now puts his ponytail over his should and acts all swishy. Huh? Bitch, please.

I wore dresses as a little kid and went everywhere saying, "I want to be a girl!" And I'm not trying to be anything but me. It has been said that I act more like a real woman than any of these so-called trannies, and I'm not faking it. So I've had a hard time accepting these sudden conversions. I feel certain that all these fake-assed trannies are going to go back to being Bryson, and Joel, and Justin just as soon as they leave this place. Attention whore much?

Give me a break. Now they prefer to be called Kylie or Chelsea or Arya (really?) instead of the names they went by when they first got here. So far, I've resisted mightily. I am not buying it.

I will admit that recently I've been rethinking my position and going along with their wishes, and calling them by their newly discovered stripper names, just to get along and not be an ass. But I know I'm going to throw up a little every time I call the former Mormon homophobe Bryson as "Kylie."

Well, so far, we're still freakin' locked down. Geez. Hopefully by lunch—in a half hour or so—we'll be back to normal. In the meantime, I think I'll get back to my book that was sent by one of the free books for prisoners groups. I received Son of a Witch by Gregory Maguire—how cool! I would encourage anyone to contact some of these groups and make a donation of some kind. I assume they accept books in good shape.

So... the power outage earlier in the day screwed up the hot water. So no showers. Oh, and of course I forgot to mention that while the power was off, we couldn't flush. They waited till almost noon to get things back to normal. Lunch was late. The whole Xmas bags thing took all afternoon, and they had us walk the entire perimeter of the main compound to get back to our units—in the rain—instead of directly book or even through the middle of the compound.

Then, so I scarf down the strawberry ice cream and immediately chug the quart of eggnog. By this time, it's lockdown. I'm laying on the bed, and my stomach is churning and I start to sweat. it wouldn't stop. Yup, I puked. Dan had to move 'cause he was sitting right by the toilet. I checked the calories, and all that was about 2,000 calories I really could've used.

By the way, I was going through one of my exercise kicks before Dan moved in and even though it's greatly slacked off. I haven't quit entirely, yet. ANYWAY—the other day I did 100 situps non-stop! I may have skinny arms, but I'm glad I'm still in good shape.

It's a chilly December morning. I haven't been out yet. I try to sleep in on the weekend—or at least not get out of bed—I'm semi-awake as soon as they unlock the doors in the morning, and then Dan is up and goes out and in, and has an AWFUL morning poop schedule. People: unless there are unusual circumstances, I am a firm believer that you can train your body to "need to go" at regular times and early in the morning is not a good time when you have a cellie who might like to lay in bed past 7 AM. Just sayin'

C3PO is currently charging and I"m stuck with the radio. He is greatly missed.

We are currently having count right now. So much fun.

I've had a date screwed up for the past two nights in a row with "Donkey". I forgot to mention that the night we got our Xmas bags, it started to get foggy and they had a recall at 7 PM. It really sucked.

I heard Justin sold his Xmas bag to several different people as did Sean in his unit, who "checked in" as a result. Justin has some lame excuse (I was told), but it's not that believable. Thank goodness I didn't get caught up in that one. I just do not get these silmeball guys and their scams. Don't they realize that they lose more in the long run? It's beyond me.

There's a rumor on Inmate.com that we may get tablets soon. Word is that they've already tested them out at some women's prisons. If we did, it would be a big step up for us to get something that y'all take for granted.

Ditto. See previous day. At least I have C3PO with me this time. Madonna's "Borderline" just came on. It's one of my favorite all time Madonna songs, and it always brings me back to my youth.

I have an older picture of me which I should send in. I look at it and think, "Oh my God. I never thought I looked cute back then. But this guy is kinda cute!"

I've thought of writing a whole autobiography to include in here. My life wasn't that extraordinary, but there were a few weird moments. I was a really weird kid.

I probably mentioned this last year, but again for the holidays, the prison is showing various rented movies for the last 15 or so days of the year. And they try to get us decent movies too, so that's always fun. We usually only get rented movies Friday - Sunday (one each day).

Oh, the other day when we lost the hot water? They didn't get that fixed until Saturday around 2 PM. It really sucked. The other buildings had theirs back on, but our building always has some problem or other. Ugh.