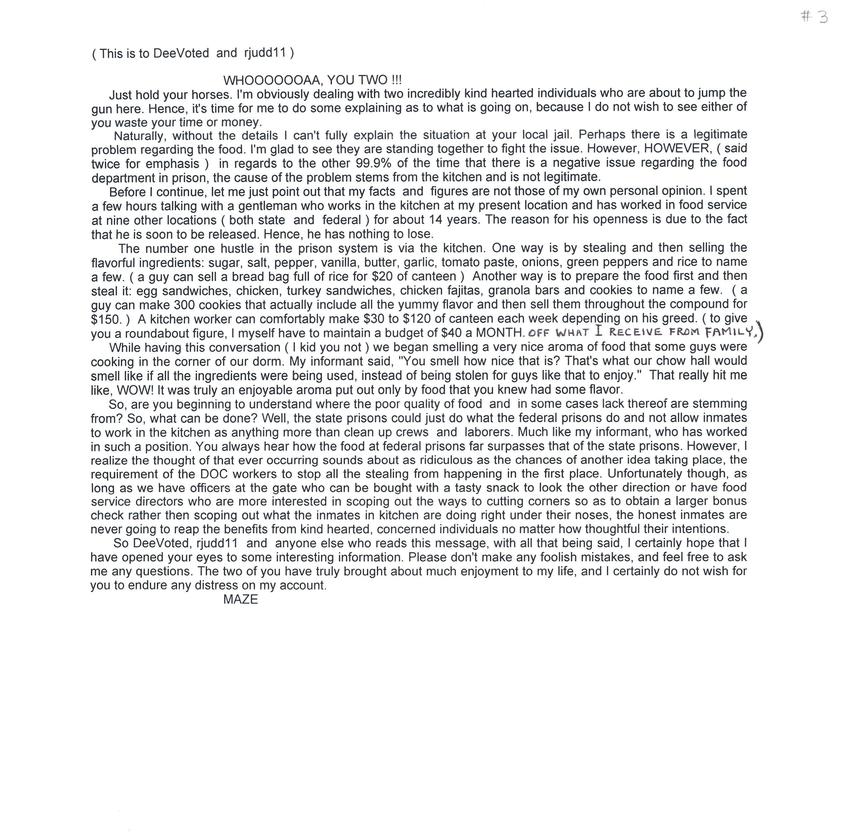 Just hold your horses. I'm obviously dealing with two incredibly kind hearted individuals who are about to jump the gun here. Hence, it's time for me to do some explaining as to what is going on, because I do not wish to see either of you waste your time or money.

Naturally, without the details I can't fully explain the situation at your local jail. Perhaps there is a legitimate problem regarding the food. I'm glad to see they are standing together to fight the issue. However, HOWEVER, (said twice for emphasis) in regards to the other 99.9% of the time that there is a negative issue regarding the food department in prison, the cause of the problem stems from the kitchen and is not legitimate.

Before I continue, let me just point out that my facts and figures are not those of my own personal opinion. I spent a few hours talking with a gentleman who works in the kitchen at my present location and has worked in food service at nine other locations (both state and federal) for about 14 years. The reason for his openness is due to the fact that he is soon to be released. Hence, he has nothing to lose.

The number one hustle in the prison system is via the kitchen. One way is by stealing and then selling the flavorful ingredients: sugar, salt, pepper, vanilla, butter, garlic, tomato paste, onions, green peppers and rice to name a few. (a guy can sell a bread bag full of rice for $20 of canteen) Another way is to prepare the food first and then steal it: egg sandwiches, chicken, turkey sandwiches, chicken fajitas, granola bars and cookies to name a few. (a guy can make 300 cookies that actually include all the yummy flavor and then sell them throughout the compound for $150.) A kitchen worker can comfortably make $30 to $120 of canteen each week depending on his greed. (to give you a roundabout figure, I myself have to maintain a budget of $40 a MONTH off what I receive from family.)

While having this conversation (I kid you not) we began smelling a very nice aroma of food that some guys were cooking in the corner of our dorm. My informant said, "You smell how nice that is? That's what our chow hall would smell like if all the ingredients were being used, instead of being stolen for guys like that to enjoy." That really hit me like, WOW! It was truly an enjoyable aroma put out only by food that you knew had some flavor.

So, are you beginning to understand where the poor quality of food and in some cases lack thereof are stemming from? So, what can be done? Well, the state prisons could just do what the federal prisons do and not allow inmates to work in the kitchen as anything more than clean up crews and laborers. Much like my informant, who has worked in such a position. You always hear how the food at federal prisons far surpasses that of the state prisons. However, I realize the thought of that ever occurring sounds about as ridiculous as the chances of another idea taking place, the requirement of the DOC workers to stop all the stealing from happening in the first place. Unfortunately though, as long as we have officers at the gate who can be bought with a tasty snack to look the other direction or have food service directors who are more interested in scoping out the ways to cutting corners so as to obtain a larger bonus check rather than scoping out what the inmates in kitchen are doing right under their noses, the honest inmates are never going to reap the benefits from kind hearted, concerned individuals no matter how thoughtful their intentions.

So DeeVoted, rjudd11 and anyone else who reads this message, with all that being said, I certainly hope that I have opened your eyes to some interesting information. Please don't make any foolish mistakes, and feel free to ask me any questions. The two of you have truly brought about much enjoyment to my life, and I certainly do not wish for you to endure any distress on my account.