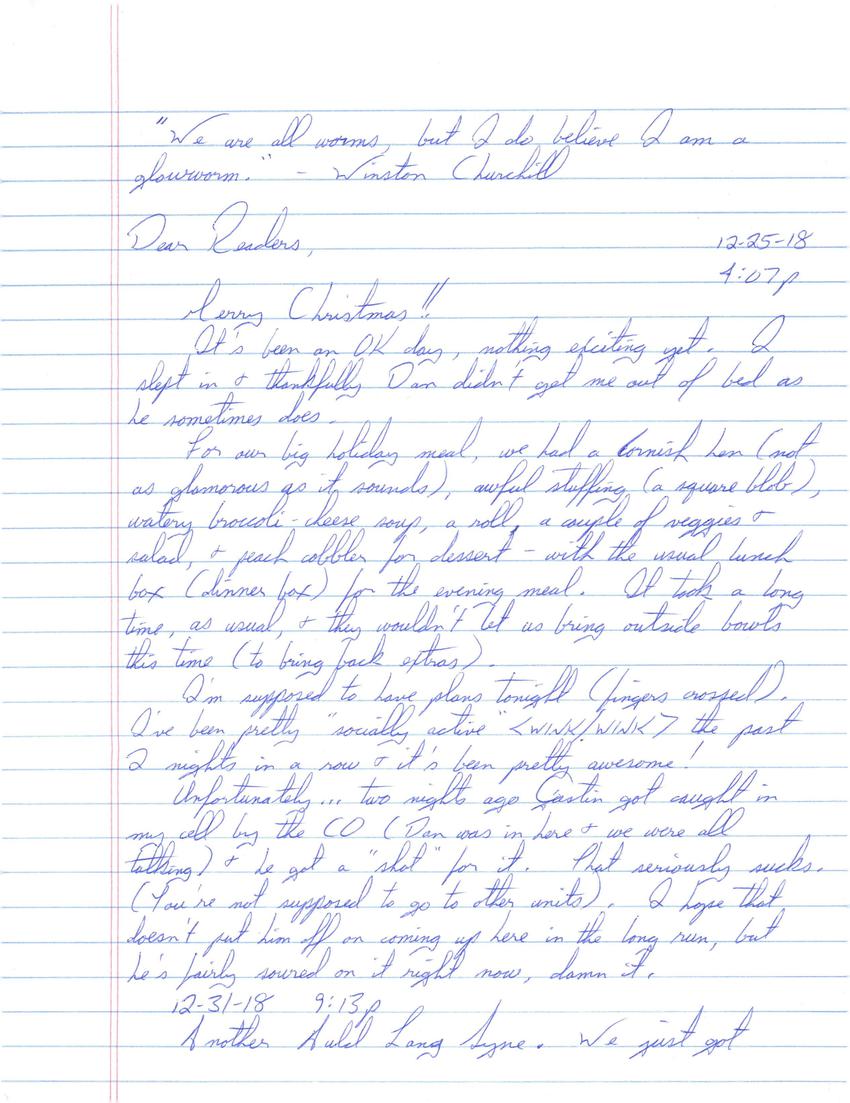 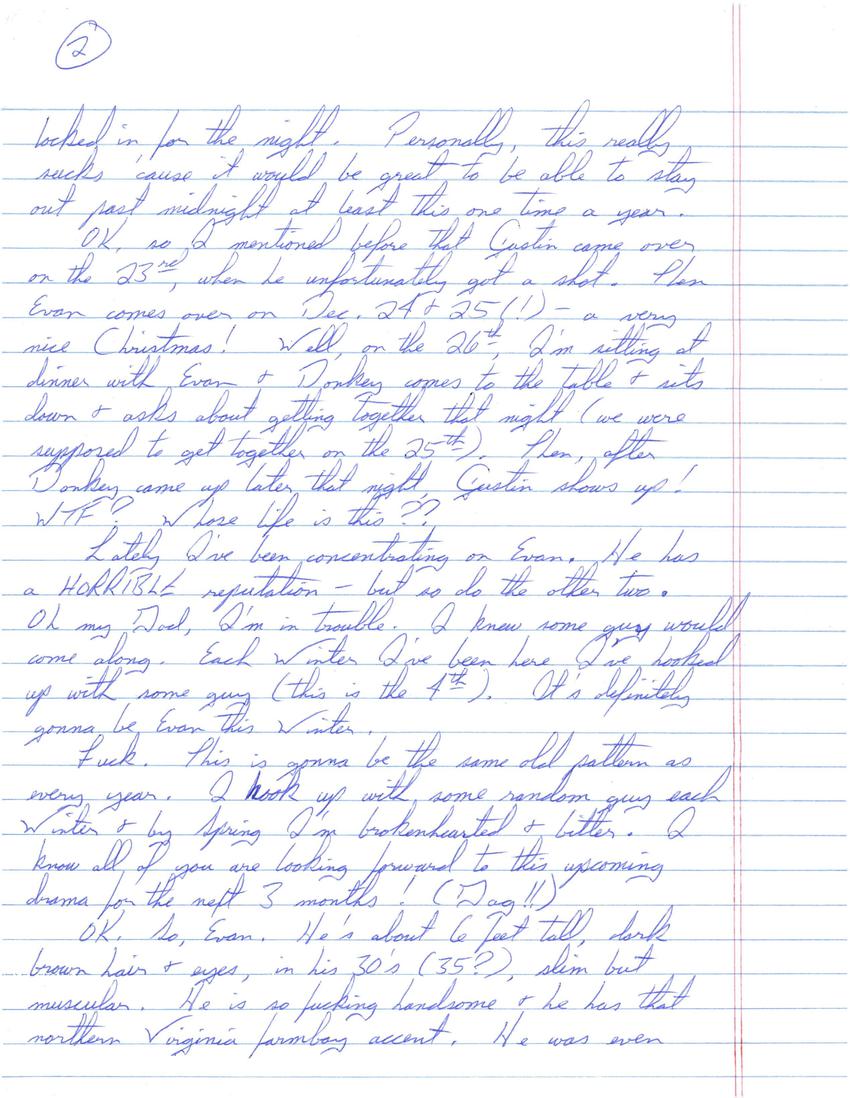 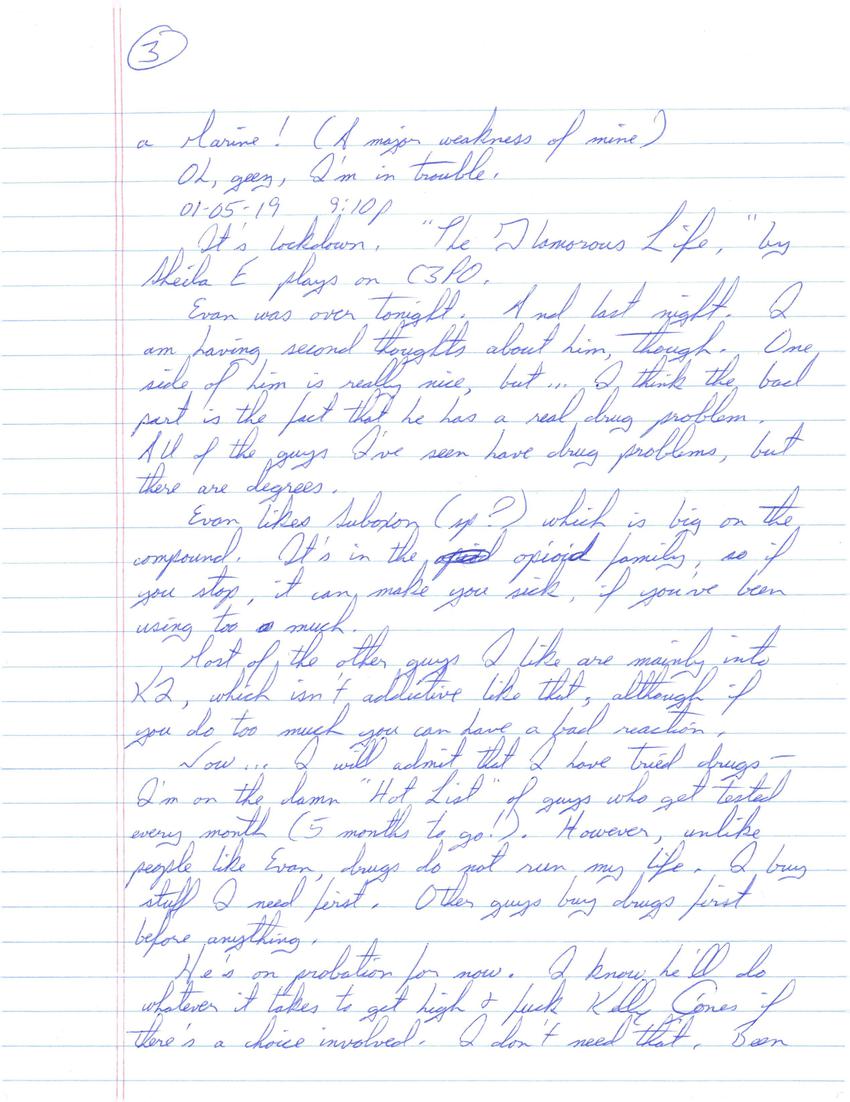 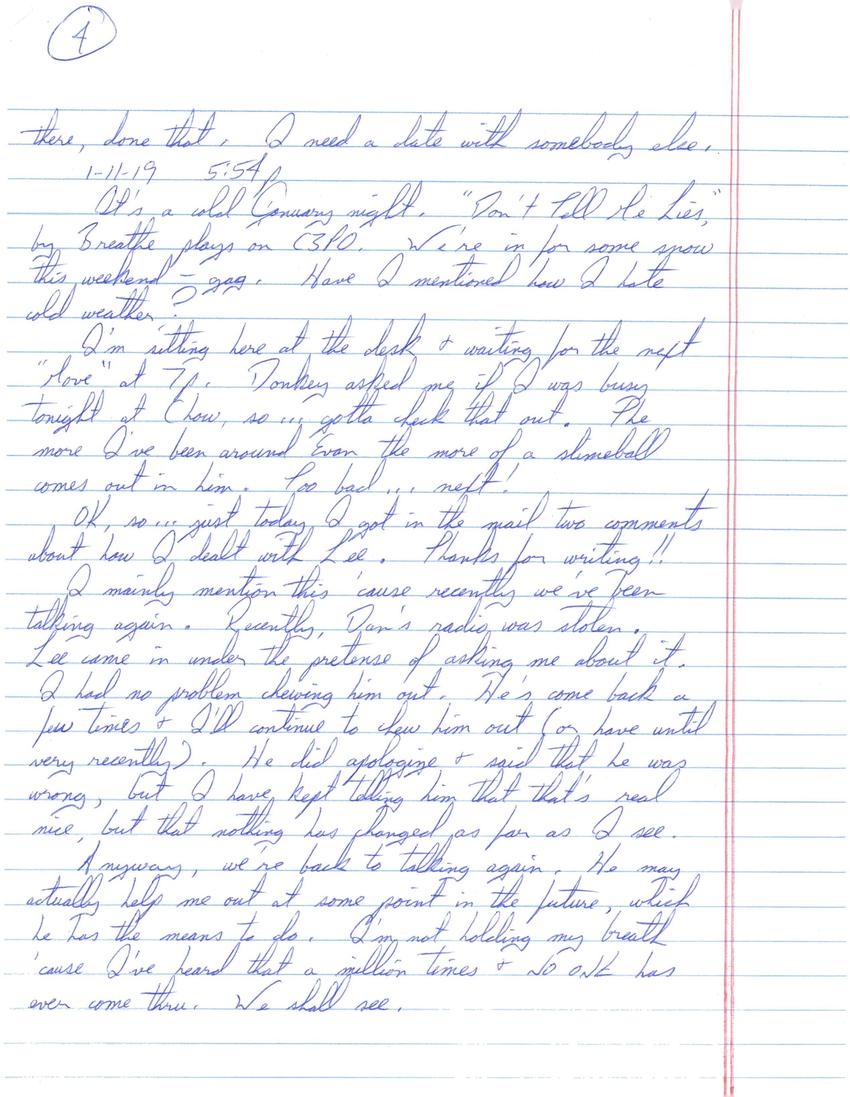 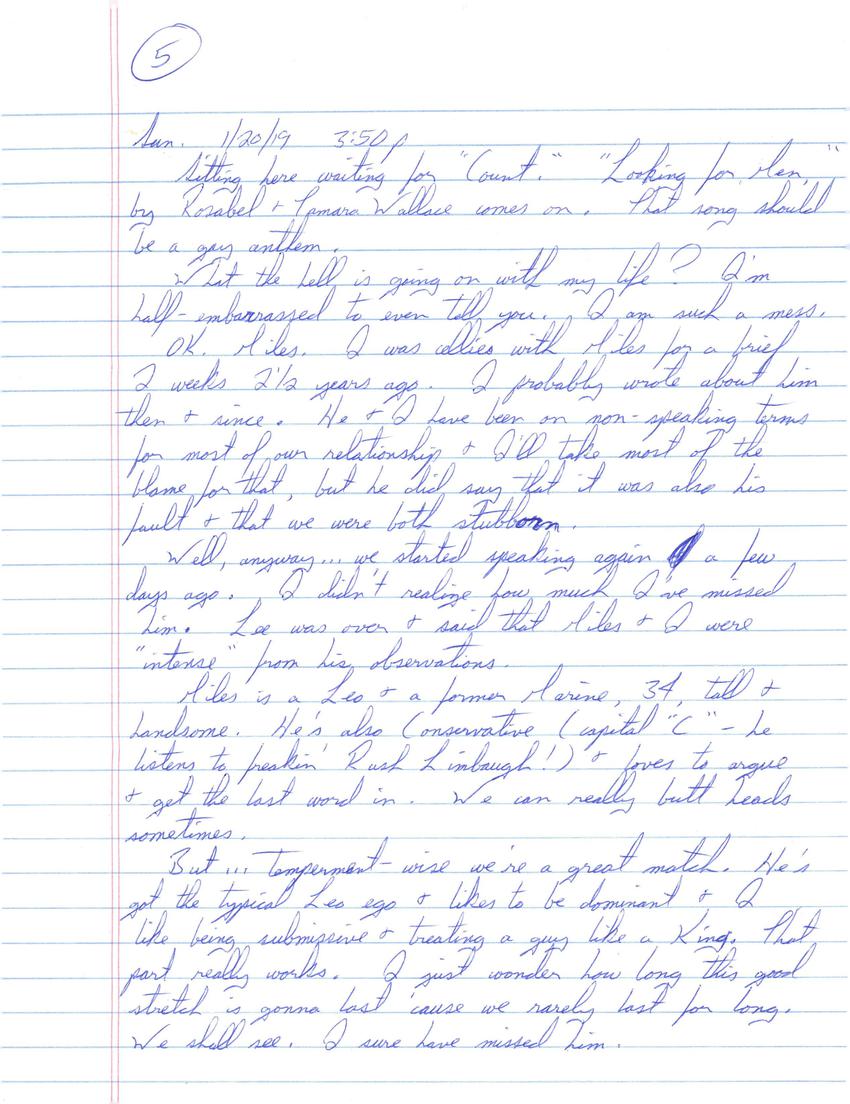 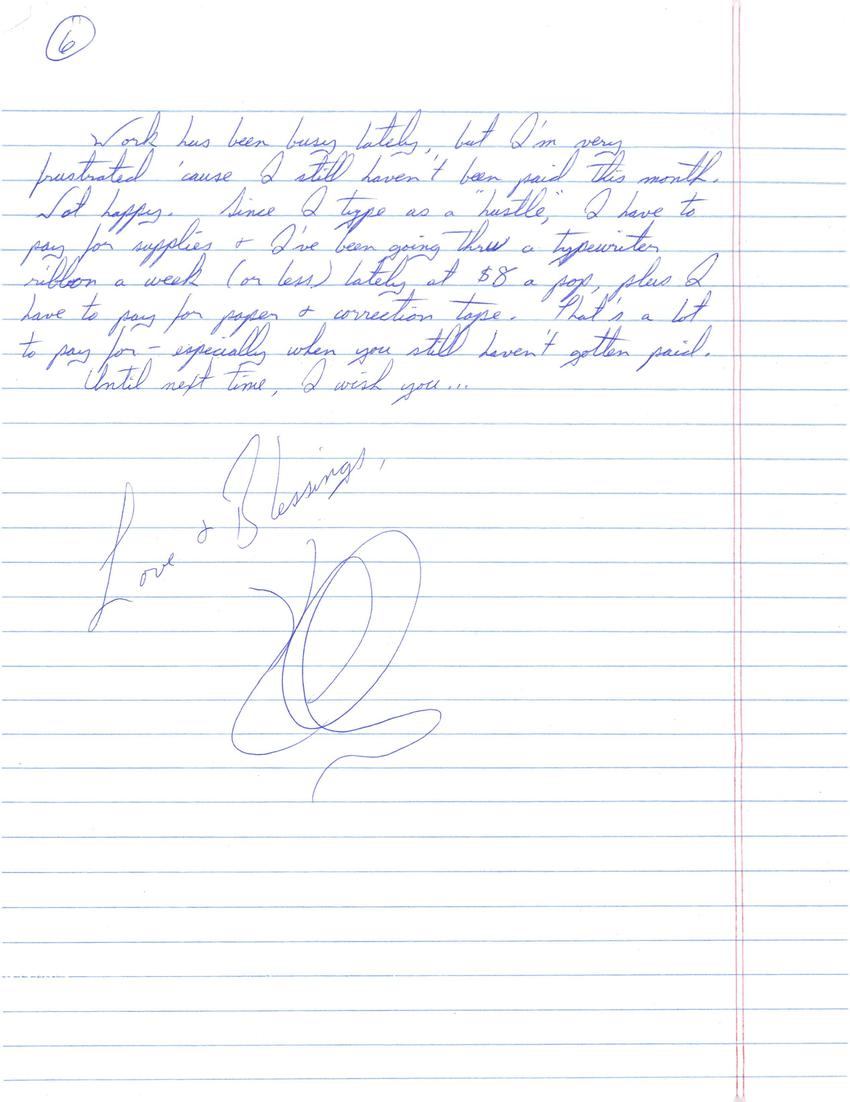 "We are all worms, but I do believe I am a glowworm."
—Winston Churchill

Merry Christmas! It's been an okay day. Nothing exciting yet. I slept in and thankfully Dan didn't get me out of bed as he sometimes does.

For our big holiday meal, e had a Cornish hen (not as glamorous as it sounds), awful stuffing (a square blob), watery broccoli cheese soup, a roll, a couple of veggies and salad, and peach cobbler for dessert—with the usual lunch box (dinner box) for the evening meal. It took a long time, as usual, and they wouldn't let us bring outside bowls for bring back extras this time.

I'm supposed to have plans tonight (fingers crossed). I've been pretty socially active (wink, wink) the past two nights in a row, and it's been pretty awesome!

Unfortunately, two nights ago, Justin got caught in our cell by the CO. Dan was in here, and we were all talking. He got a shot for it. That seriously sucks. (You're not supposed to go to other units.) I hope that doesn't put him off on coming up here in the long run, but he's fairly soured on it right now, damn it.

Another Aulel Lang Syne. We just got locked in for the night. Personally, this really sucks 'cause it would be great to be able to stay out past midnight at least one time a year.

Okay, so I mentioned before that Justin came over on the 23rd, when he unfortunately got a shot. Then Evan comes over on December 24 and 25(!)—a very nice Christmas! Well, on the 26th, I'm sitting at dinner with Evan and Donkey comes to the table. He sits down and asks about getting together that night. We were supposed to get together on the 25th. Then after Donkey came up later that night, Justin shows up! WTF? Whose life is this?

Lately, I've been concentrating on Evan. He has a HORRIBLE reputation—but so do the other two.

Oh my God, I'm in trouble. I know some guy would come along. Each winter I've been here, I've hooked up with some guy (this is the forth). It's definitely gonna be Evan this winter.

Fuck. This is gonna be the same old pattern every year. I hook up with some random guy each winter and, by spring, I'm brokenhearted to this upcoming drama for the next three months! Gag!

Okay, so, Evan. He's about 6 feet tall, dark brown hair and eyes, in his 30s (35?), slim but muscular. He is so fucking handsome and he has that northern Virginia farm boy accent. He was even a Marine! A major weakness of mine.

It's lockdown. "The Glamorous Life" by Sheila E plays on C3P0.

Evan was over tonight. And last night. I am having second thoughts about him, though. One side of him is really nice, but... I think the bad part is the fact that he has a real drug problem. All of the guys I've seen have drug problems, but there are degrees.

Evan likes Suboxon (sp?) which is big on the compound. It's in the opioid family, so if you stop, it can make you sick if you've been using too much. Most of the other guys I like are mainly into K2, which isn't addictive like that, although if you do too much, you can have a bad reaction.

Now, I will admit that I have tried drugs. I'm on the damn hot list of guys who get tested every month (five months to go!). However, unlike people like Evan, drugs do not run my life. I buy stuff I need first. Other guys buy drugs first before anything.

He's on probation for now. I know he'll do whatever it takes to get high and fuck Kelly Jones if there's a choice involved. I don't need that. Been there, done that. I need a date with someone else.

It's a cold January night. "Don't Tell Me Lies" by Breathe plays on C3PO. We're in for some snow this weekend—gag. Have I mentioned how I hate cold weather?

I'm sitting here at the desk and waiting for the next move at 7 PM. Donkey asked me if I was busy tonight at chow so gotta check that out. The more I've been around Evan, the more of a slimeball comes out in him. Too bad. Next!

Okay, so... just today, I got in the mail two comments about how I dealt with Lee. Thanks for writing!

I mainly mention this 'cause recently we've been talking again. Recently, Dan's radio was stolen. Lee came in under the pretense of asking me about it. I had no problem chewing him out. He's come back a few times, and I'll continue to chew him out (or have until very recently). He did apologize and said that he was wrong, but I have kept telling him that that's real nice, but nothing has changed as far as I can see.

Anyway, we're back to talking again. He may actually help me out at some point in the future, which he has the means to do. I'm not holding my breath 'cause I've heard that a million times, and NO ONE has ever come through. We shall see.

Sitting here waiting for "count". "Looking for Men" by Rosabel and Tamara Wallace comes on. That song should be a gay anthem.

What the hell is going on with my life? I'm half-embarrassed to even tell you. I am such a mess.

Okay, Miles. I was cellies with Miles for a brief two weeks 2 1/2 years ago. I probably wrote about him then and since. He and I have been on nonspeaking terms for most of our relationship, and I'll take most of the blame for that. But he did say that it was also his fault and that we were both stubborn.

Well, anyway... we started speaking again a few days ago. I didn't realize how much I've missed him. Lee was over and said that Miles and I were "intense" from his observations.

Miles is a Leo and a former Marine, 34, tall and handsome. He's also Conservative (capital "C"—he listens to freakin' Rush Limbaugh!) and loves to argue and get the last word in. We can really butt heads sometimes. But temperament-wise, we're a great match. He's the typical Leo ego and lies to be dominant. I like being submissive and treating a guy like a king. That part really works. I just wonder how long this good stretch is gonna last 'cause we rarely last for long. We shall see. I sure have missed him.

Work has been busy lately, but I'm very frustrated 'cause I still haven't been paid this month. Not happy. Since I type as a "hustle", I have to pay for supplies and I've been going through a typewriter ribbon a week (or less) lately at $8 a pop. Plus I have to pay for the paper and correction tape. That's a lot to pay for—especially when you still haven't gotten paid.