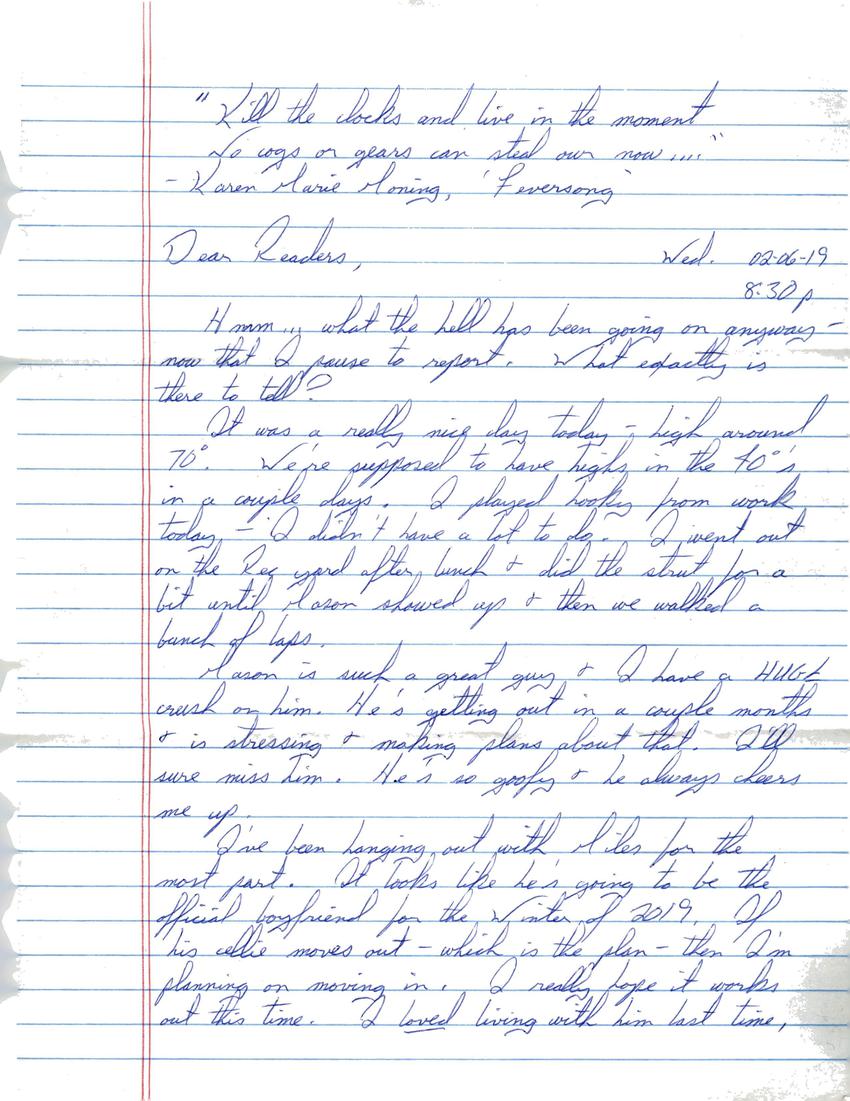 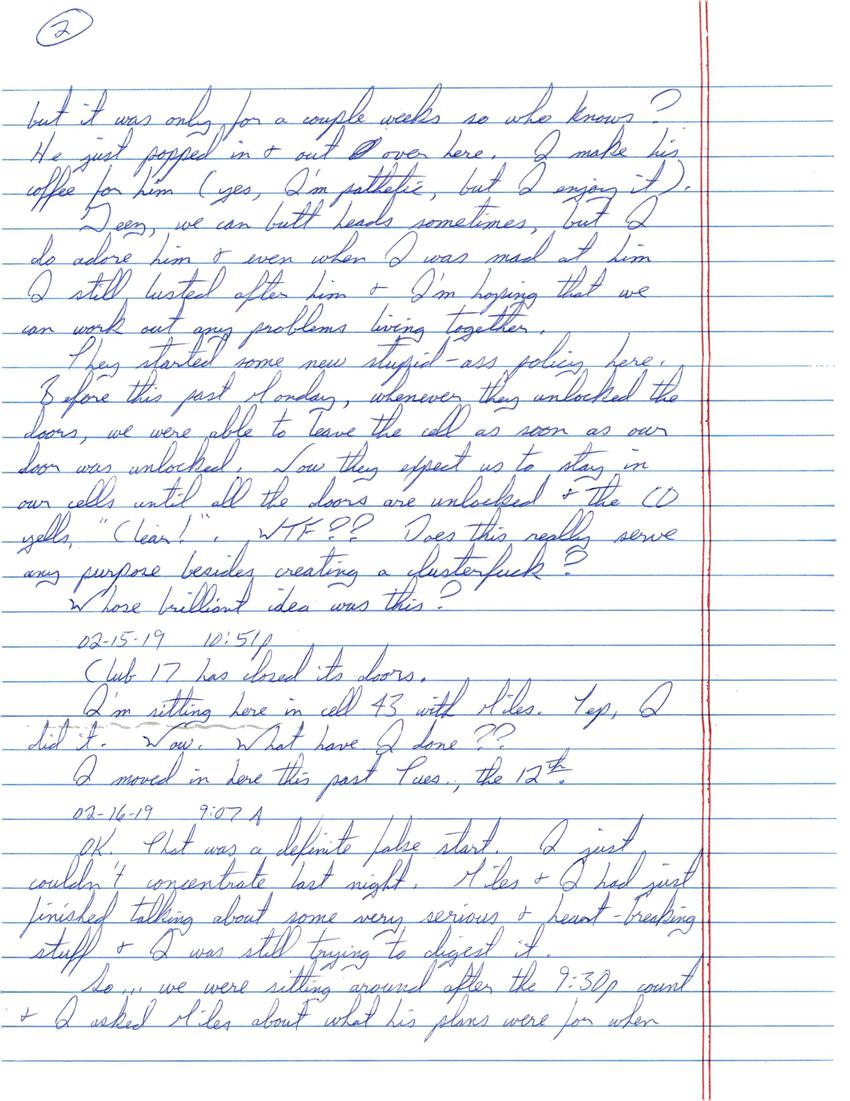 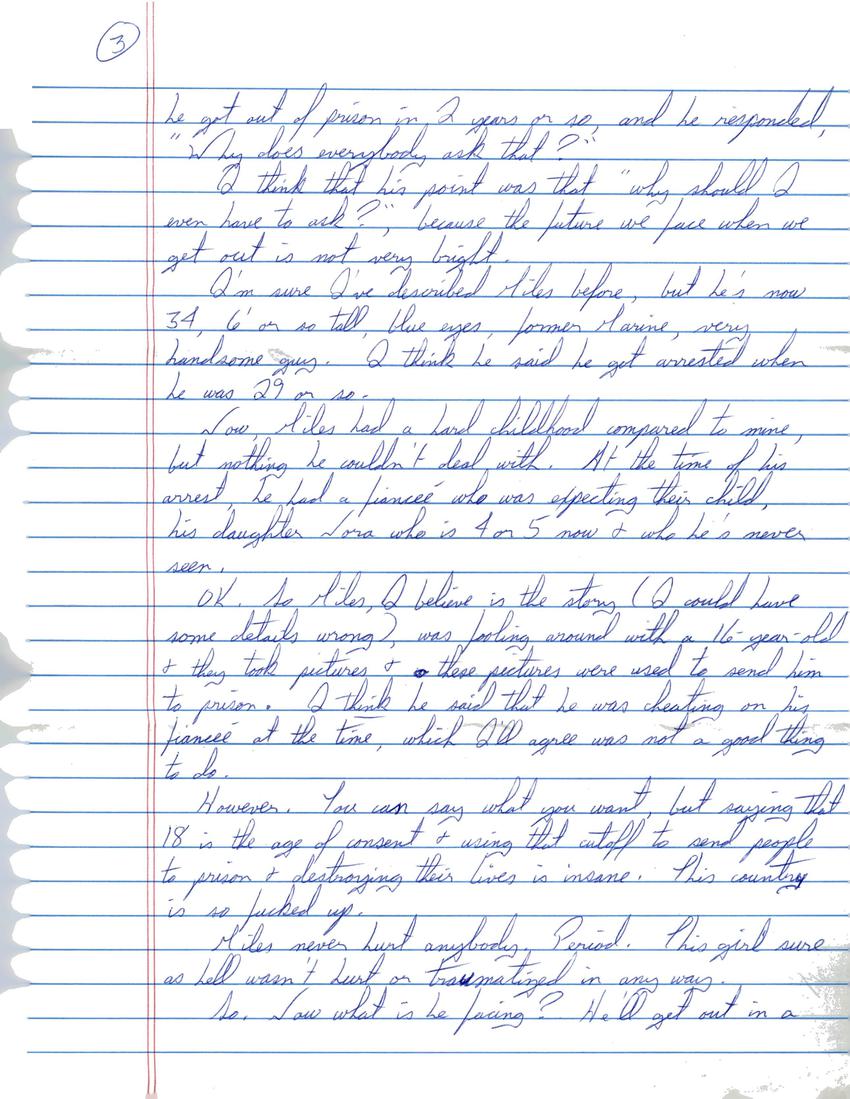 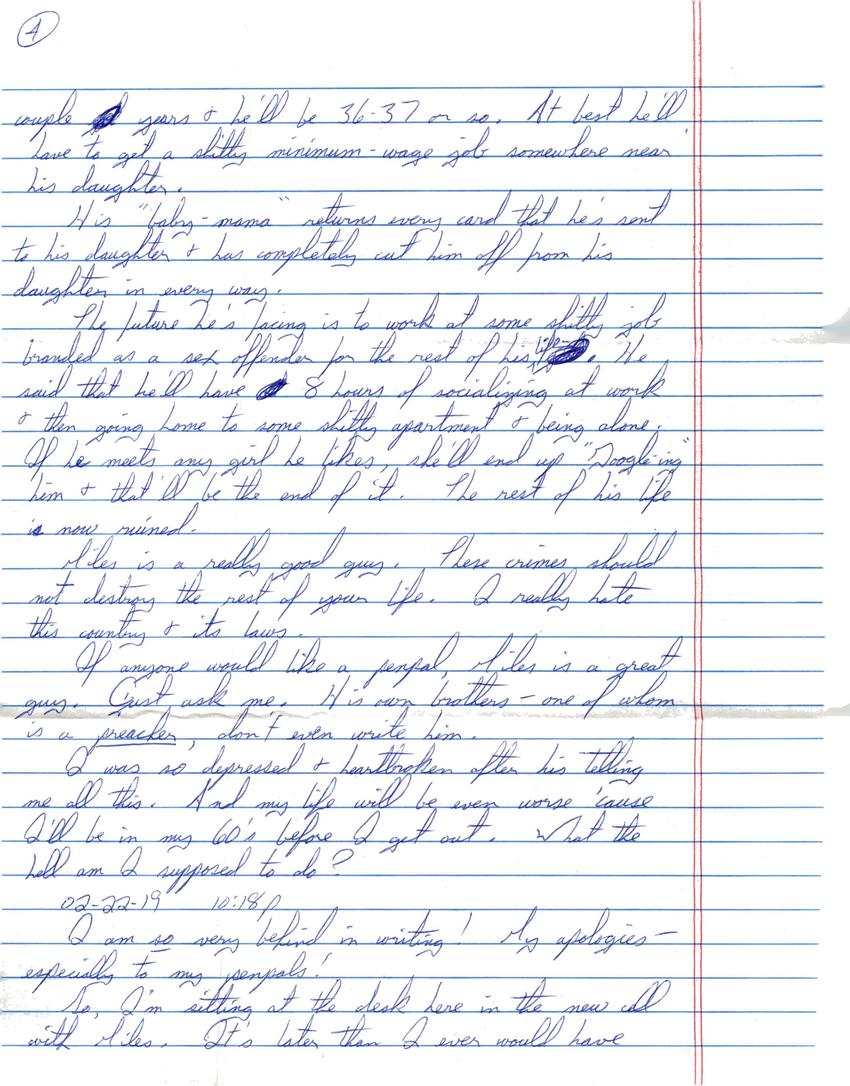 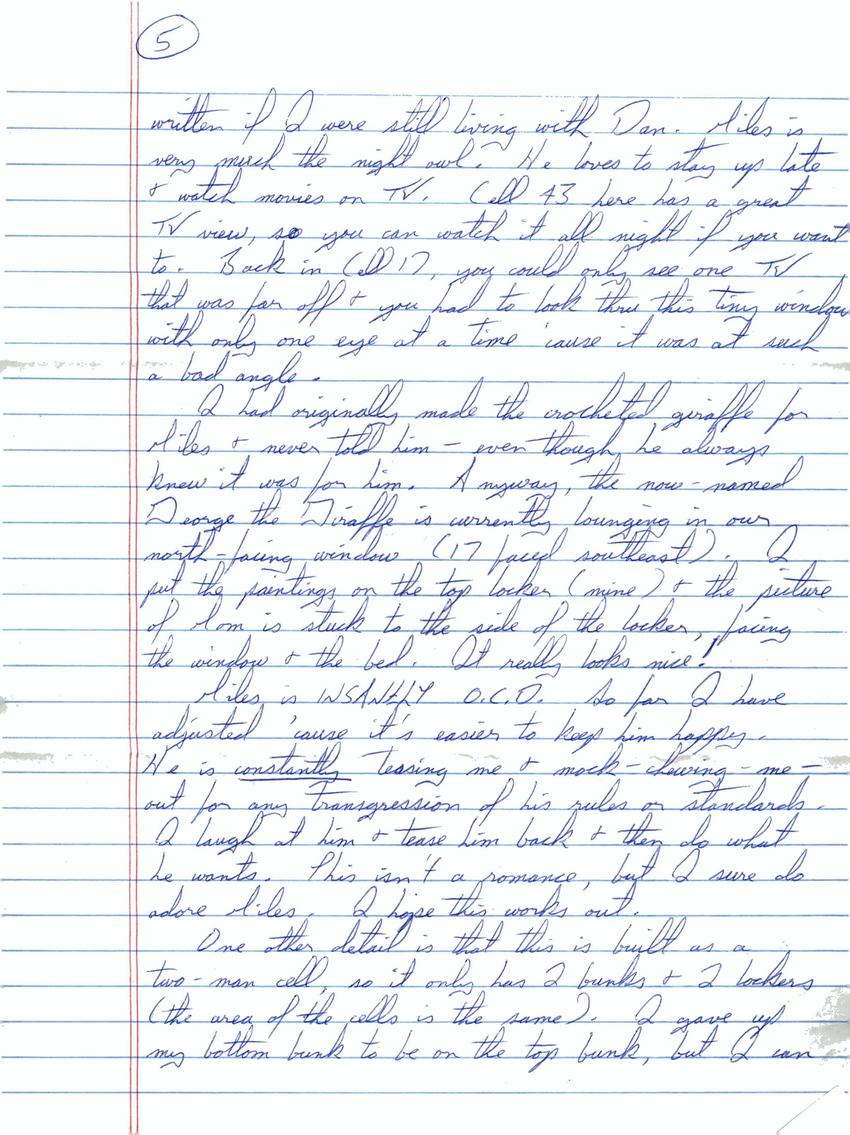 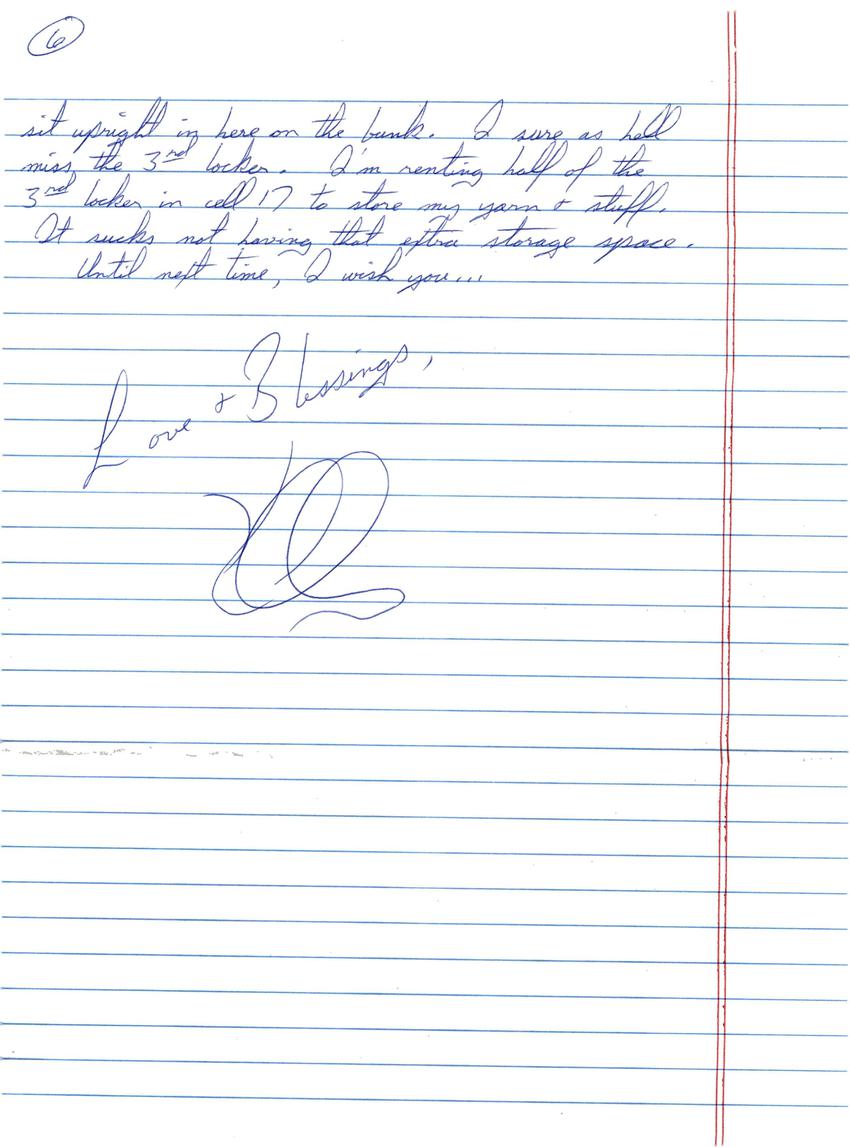 "Kill the clocks and live in the moment. No cogs or gears can steal our now..."
—Karen Marie Morning, Feversong

Dear Readers,
Hmm... what the hell has been going on anyway—now that I pause to report. What exactly is there to tell?

It was a really nice day today—high around 70 degrees. We're supposed to have high in the 40 degrees in a couple of days. I played hookey from work today. I didn't have a lot to do. I just went out on the rec yard after lunch and did the strut for a bit until Mason showed up. Then we walked a bunch of laps.

Mason is such a great guy, and I have a HUGE crush on him. He's getting out in a couple months. He's stressing and making plans about that. I'll sure miss him. He's so goofy and he always cheers me up.

I've been hanging out with Miles for the most part. It looks like he's going to be the official boyfriend for the winter of 2019. If his cellie moves you—which is the plan—then I'm planning on moving in. I really hope it works out this time. I loved living with him last time, but it was only for a couple weeks so who knows. He just popped in and out over here. I make his coffee for him (yes, I'm pathetic. But I enjoy doing it).

Jeez, we can butt heads sometimes but I do adore him. Even when I was mad at him, I still lusted after him. I'm hoping that we can work out any problems living together.

They started some new stupid ass policy here. Before this past Monday, whenever they unlocked the doors, we were able to leave the cell as soon as our door was unlocked. Now they expect us to stay in our cells until the doors are unlocked and the CO yells, "Clear!" WTF? Does this really serve any purpose besides creating a clusterfuck? Whose brilliant idea was this?

Club 17 has closed its doors.

I moved in here this past Tuesday, the 12th.

Okay, that was a definite fake start. I just couldn't concentrate last night. Miles and I had just finished talking about some very serious and heartbreaking stuff. I was still trying to digest it.

So... we were sitting around after the 9:30 PM count and I asked Miles about what his plans were for when he got out of prison in two years or so. He responded, "Why does everybody ask that?" I think his point was why should I even have to ask? Because the future we face when we get out is not very bright.

I'm sure I've described Miles before, but he's now 34, 6' or so tall, blue eyes, former Marine, very handsome guy. I think he said he got arrested when he was 29 or so.

Now, Miles had a hard childhood compared to mine, but nothing he couldn't deal with. At the time of his arrest, he had a fiancée who was expecting their child, his daughter Nora (who is 4 or 5 now and who he's never seen). Okay. So Miles—I believe the story is this, I could have gotten some details wrong—was foolish around with a 16-year-old. They took pictures and these pictures were used to send him to prison. I think he said that he was cheating on his fiancée at the time, which I'll agree was not a good thing to do.

However, you can say what you want, but saying that 18 is the age of consent and using that cutoff to send people to prison and destroy their lives is insane. This country is so fucked up. Miles never hurt anybody. Period. This girl sure as hell wasn't hurt or traumatized in any way.

So now what is he facing? He'll get out in a couple years, and he'll be 37-38 or so. At best, he'll have to get a shitty minimum wage job somewhere near his daughter. His "baby momma" returns every card that he's sent to his daughter and has completely cut him off from his daughter in every way.

The future he's facing is to work at some shitty job, branded as a sex offender for the rest of his life. He said that he'll have eight hours of socializing at work and then go home to some shitty apartment alone. If he meets any girl he likes, she'll end up googling him and that'll be the end of it. The rest of his life is now ruined.

Miles is a real good guy. These crimes should not destroy the rest of your life. I really hate this country and its laws. If anyone would like to pen pal, Miles is a great guy. Just ask me. He is own brothers—one of whom is a preacher—don't even write him.

I was so depressed and heartbroken after his telling me all of this. And my life will be even worse 'cause I'll be in my 60s before I get out. What the hell am I supposed to do?

I am so very behind in writing! My apologies—especially to my pen pals!

So I'm sitting at the desk here in the new cell with Miles. It's later than I even would have written if I were still living with Dan. Miles is very much the night owl. He loves to stay up late and watch movies on TV. Cell 43 here has a great TV view, so you can watch it all night if you want. Back in cell 17, you could only see one TV that was far off and you had to look through this tiny window with only one eye at a time 'cause it was at such a bad angle.

I had originally made the crocheted giraffe for Miles and never told him—even though he always knew it was for him. Anyway, the now-named George the Giraffe is currently lounging in our north-facing windows (17 faced southeast). I put the paintings on the top locker (mine) and the picture of Mom is stuck to the side of the locker facing the window and the bed. It really looks nice!

Miles is INSANELY OED. So far, I have adjusted 'cause it's easier to keep him happy. He is constantly teasing me and mock-chewing me out for any transgression of his rules or standards. I laugh at him and tease him back. Then I do what he wants. This isn't a romance, but I sure do adore Miles. I hope this works out.

One other detail is that this is built as a two-man cell, so it only has two bunks and two lockers. The area of the cells is the same. I gave up my bottom bunk to be on the top bunk, but I can sit upright in here on the bunk. I sure as hell miss the third locker. I'm renting half of the third locker in cell 17 to store my yarns and stuff. It sucks not having that extra storage space.