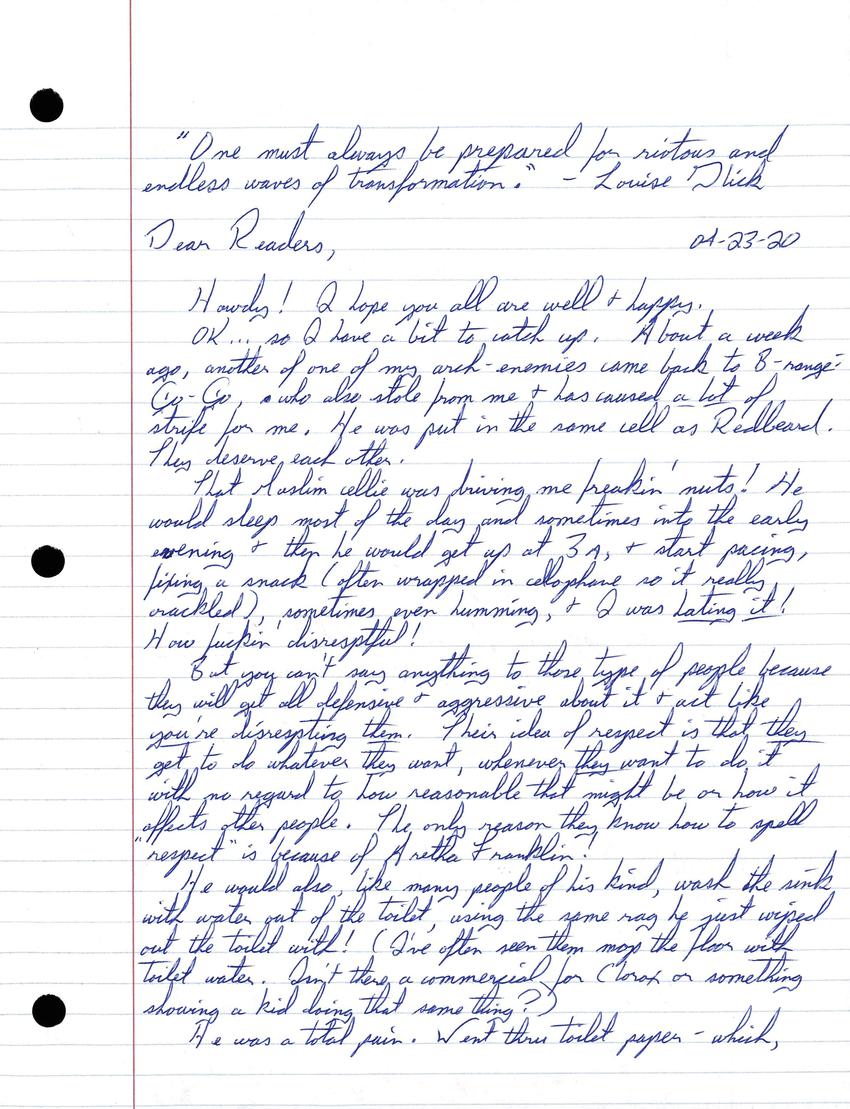 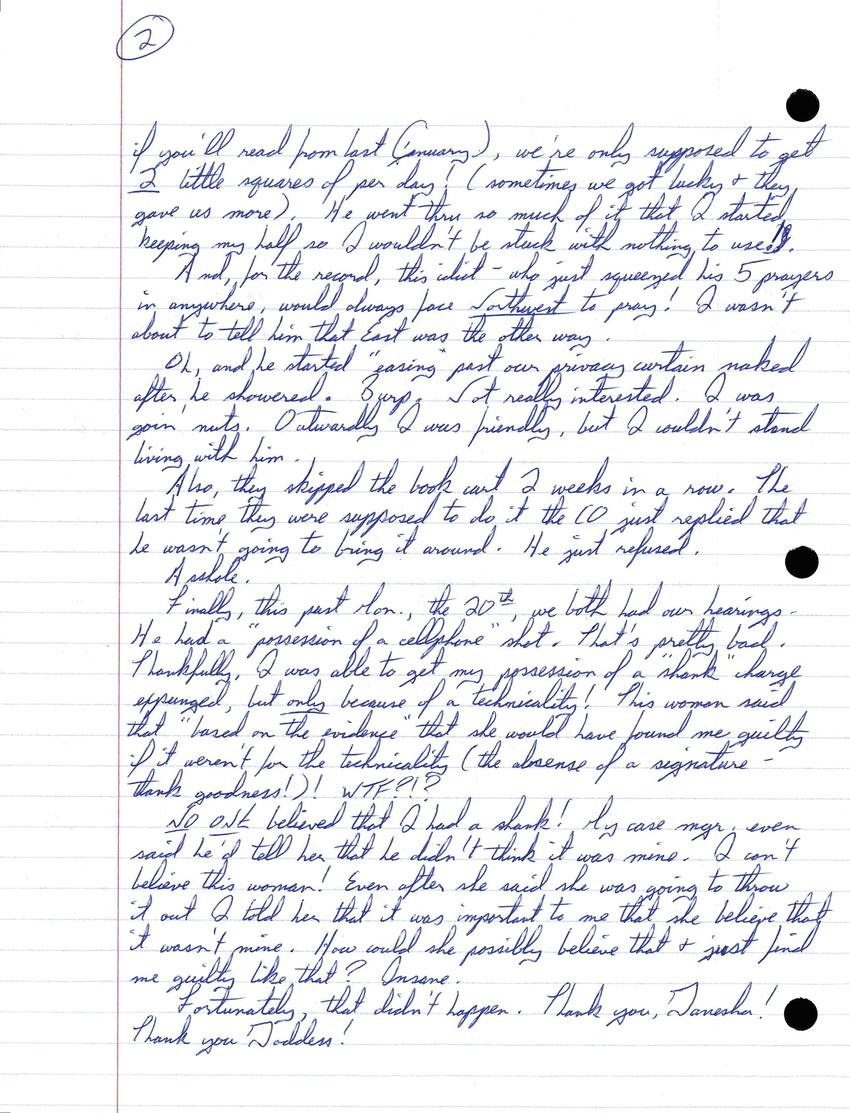 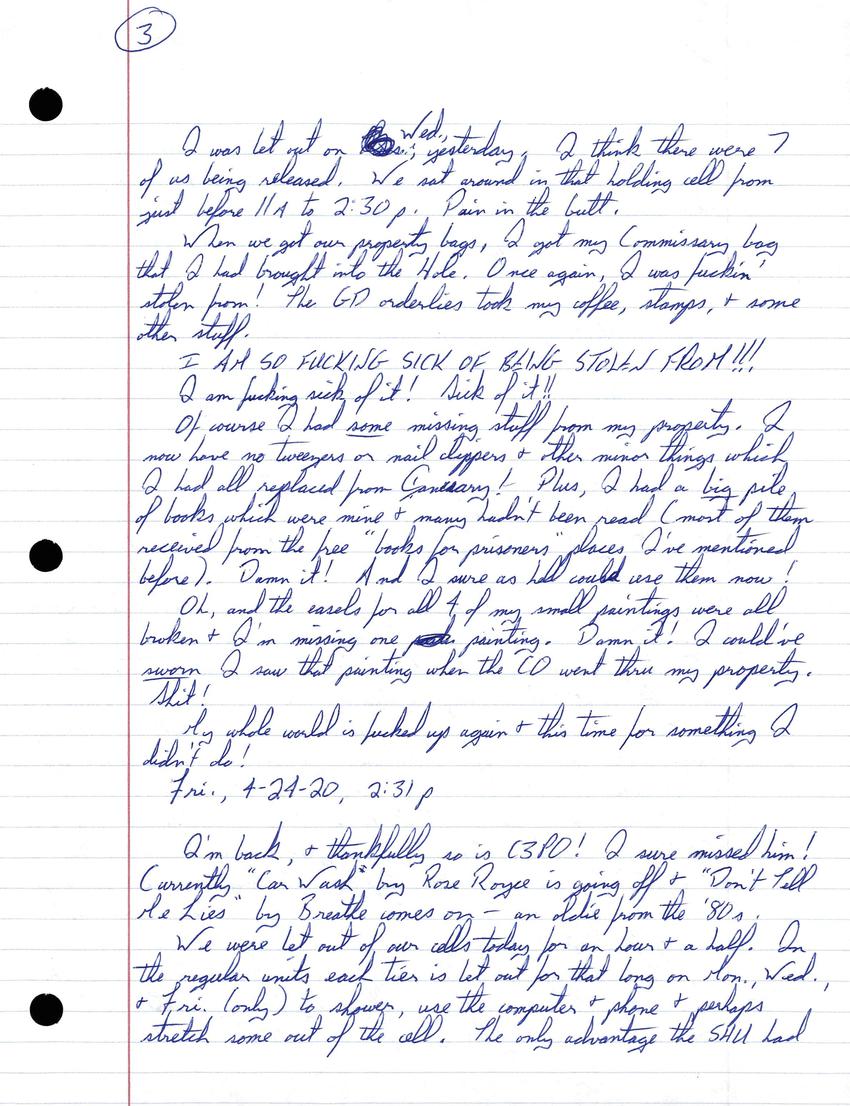 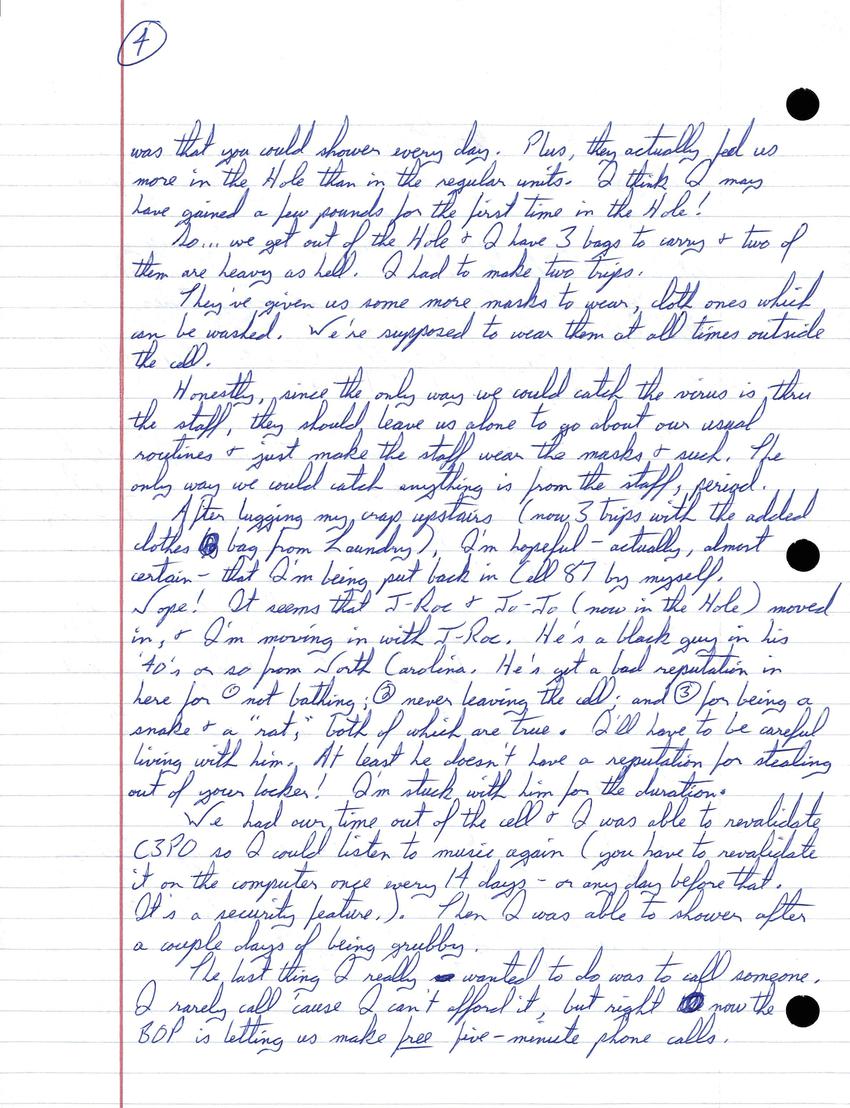 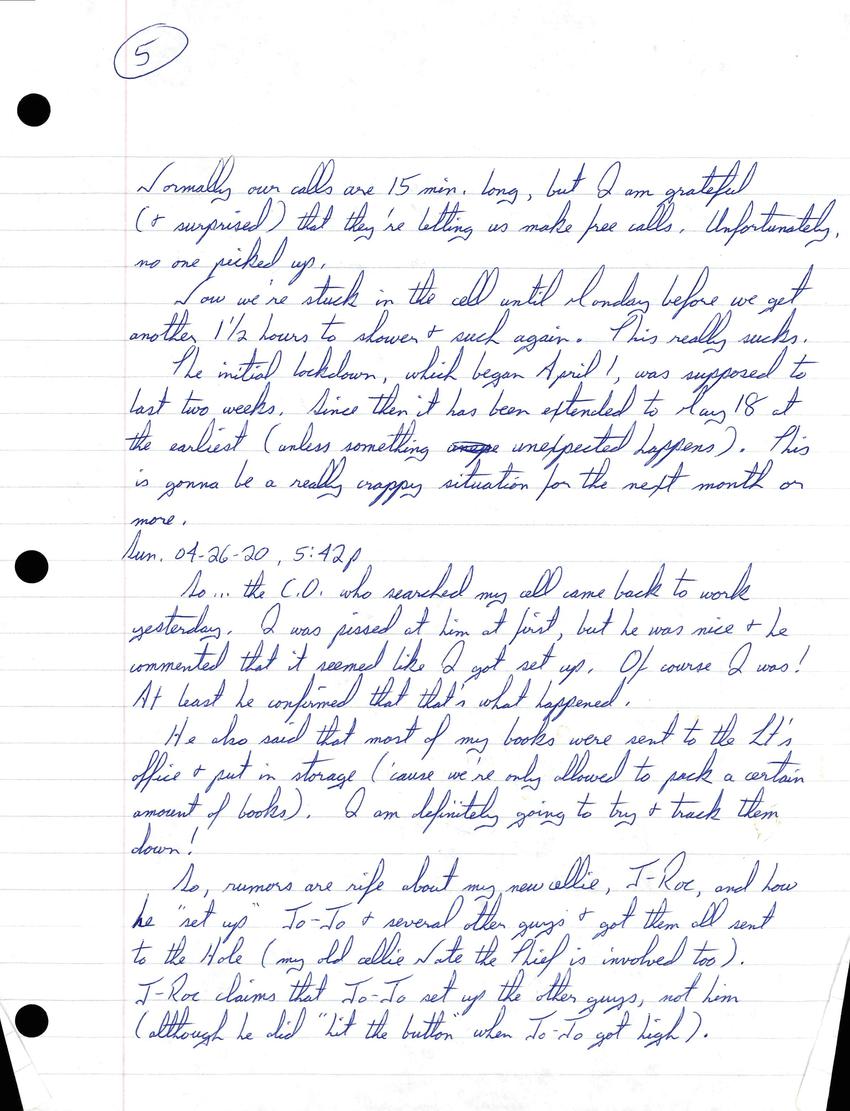 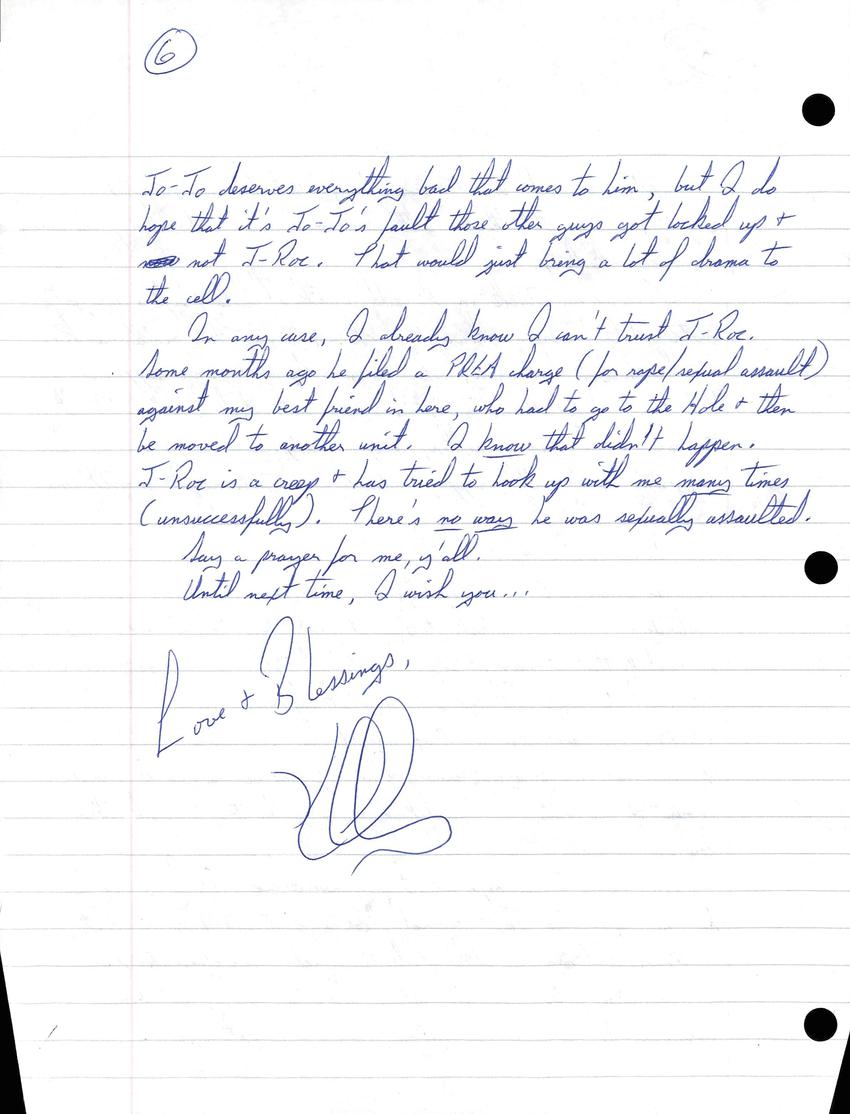 "One must always be prepared for riotous and endless waves of transformation." -Louise Glick

Howdy! I hope you all are well & happy.
OK... so I have a bit to catch up. About a week ago, another of one of my arch-enemies came back to B-range. Co-Co, who also stole from me & has caused a lot of strife for me. He was put in the same cell as Redbeard. They deserve each other.
That Muslim cellie was driving me freakin' nuts! He would sleep most of the day and sometimes into the early evening & then he would get up at 3A, & start pacing, fixing a snack (often wrapped in cellophane so it really crackled), sometimes even humming, & I was hating it! How fuckin' disrespectful!
But you can't say anything to those type of people because they will get all defensive & aggressive about it & act like you're disrespecting them. This idea of respect is that they get to do whatever they want, whenever they want to do it with no regard to how reasonable that might be on how it affects other people. The only reason they know how to spell "respect" is because of Aretha Franklin!
He would also, like many people of his kind, wash the sink with water out of the toilet, using the same rag he just wiped out the toilet with! (I've often seen them mop the floor with toilet water. Isn't there a commercial for Clorox or something showing a kid doing that something?)
He was a total pain. Went thru toilet paper- which, if you'll read from last January), we're only supposed to get 2 little squares of per day! (sometimes we got lucky & they gave us more). He went thru so much of it that I started keeping my half so I wouldn't be stuck with nothing to use!
And, for the record, this idiot- who just squeezed his 5 prayers in anywhere, would always face Northwest to pray! I wasn't about to tell him that East was the other way.
Oh, and he started "easing" past our privacy curtain naked after he showered. Burp. Not really interested. I was goin' nuts. Outwardly I was friendly, but I couldn't stand living with him.
Aha, they skipped the book cart 2 weeks in a row. The last time they were supposed to do it the CO just replied that he wasn't going to bring it around. He just refused. Asshole.
Finally, this past Mon., the 20th, we both had our hearings. He had a "possession of a cellphone" shot. That's pretty bad. Thankfully, I was able to get my possession of a "shank" charge expunged, but only because of a technicality! This woman said that "based on the evidence" that she would have found me guilty if it weren't for the technicality (the absence of a signature - thank goodness!)! WTFF?!?
NO ONE believed that I had a shank! My case mgr. even said he'd tell her that he didn't think it was mine. I can't believe this woman! Even after she said she was going to throw it out I told her that it was important to me that she believe that it wasn't mine. How could she possibly believe that & just find me guilty like that? Insane. Fortunately, that didn't happen. Thank you, Ganesha! Thank you Goddess!
I was let out on Wed., yesterday. I think there were 7 of us being released. We got around in that holding cell from just before 11A to 2:30p. Pain in the butt.
When we got our property bags, I got my Commissionary bag that I had brought into the Hole. Once again, I was fuckin' stolen from! The GD orderlies took my coffee, stamps, & some other stuff.
I AM SO FUCKING SICK OF BEING STOLEN FROM!!!
I am fucking sick of it! Sick of it!!
Of course I had some missing stuff from my property. I now have no tweezers or nail clippers & other minor things which I had all replaced from January! Plus, I had a big pile of books which were mine & many hadn't been read (most of them received from the gree "books for prisoners" places I've mentioned before). Damn it! And I sure as hell could use them now!
Oh, and the cards for all 4 of my small paintings were all broken & I'm missing one painting. Damn it! I could've sworn I saw that painting when the CO wen thru my property. Shit!
My whole world is fucked up again & this time for something I didn't do!
Fri., 4-24-20, 2:31p

I'm back, & thankfully a is C3PO! I sure missed him! Currently "Can Wash" by Rose Royce is going off & "Don't Tell Me Lies" by Breathe comes on - an oldie from the '80s.
We were let out of our cells today for an hour & a half. In the regular units each tier is let out for that long on Mon., Wed., & Fri. (only) to shower, use the computer & phone & perhaps stretch some out of the cell. The only advantage the SHU had was that you could shower every day. Plus, they actually fed us more in the Hole than in the regular units. I think I may have gained a few pounds for the first time in the Hole!
So... we get out of the hole I have 3 bags to carry & two of them are heavy as hell. I had to make two trips.
They've given us some more masks to wear, cloth ones which can be washed. We're supposed to wear them at all times outside the cell.
Honestly, since the only way we could catch the virus is through the staff, they should leave us alone to go about our usual routines & just make the staff wear the masks & such.
The only way we could catch anything is from the staff, period.
After lugging my crap upstairs (now 3 trips with the added clothes bag from Laundry), I'm hopeful - actually, almost certain - that I'm being put back in Cell 87 by myself. Nope! It seems that J-Roc & Jojo (now in the Hole) moved in, & I'm moving in with J-Roc. He's a black guy in his 40's or so from North Carolina. He's got a bad reputation in here for not bathing; never leaving the cell; and for being a snake & a "rat," both of which are true. I'll have to be careful living with him. At least he doesn't have a reputation for stealing out of your locker! I'm stuck with him for the duration.
We had our time out of the cell & I was able to revalidate C3PO so I could listen to music again (you have to revalidate it on the computer once every 13 days - or any day before that. It's a security feature.). Then I was able to shower after a couple days of being grubby.
The last thing I really wanted to do was to call someone. I rarely call 'cause I can't afford it, but right now the BOP is letting us make free five-minute phone calls. Normally our calls are 15 min. long, but I am grateful (& surprised) that they're letting us make free calls. Unfortunately, no one picked up.
Now we're stuck in the cell until Monday before we get another 1 1/2 hours to shower & suck again. This really sucks.
The initial lockdown, which begins April 1, was supposed to last two weeks. Since then it has been extended to May 18 at the earliest (unless something unexpected happens). This is gonna be a really crappy situation for the next month or more.
Sun. 04-26-20, 5:42p
So... the C.O. who searched my cell came back to work yesterday. I was pissed at him at first, but he was nice & he commented that it seemed like I got set up. Of course I was! At least he confirmed that that's what happened.
He also said that most of my books were sent to the Lt's office & put in storage ('cause we're only allowed to pack a certain amount of books). I am definitely going to buy & track them down!
So, rumors are rife about my new cellie, J-Roc, and how he "set up" Jo-Jo & several other guys & got them all sent to the Hole (my old cellie Nate the thief is involved too). J-Roc claims that Jo-Jo set up the other guys, not him (although he did "hit the button" when Jo-Jo got high). Jo-Jo deserves everything bad that comes to him, but I do hope that it's Jo-Jo's fault those other guys got locked up & not J-Roc. That would just bring a lot of drama to the cell.
In any case, I already know I can't trust J-Roc. Some months ago he filed a PREA charge (for rope/sexual assault) against my best friend in here, who had to go to the Hole & then be moved to another unit. I know that didn't happen. J-Roc is a creep & has tried to hook up with me many times (unsuccessfully.) There's no way he was sexually assaulted.
Say a prayer for me, y'all.
Until next time, I wish you...
Love & Blessings,
KJ