After All These Years, I Finally Had To Say Something About This One 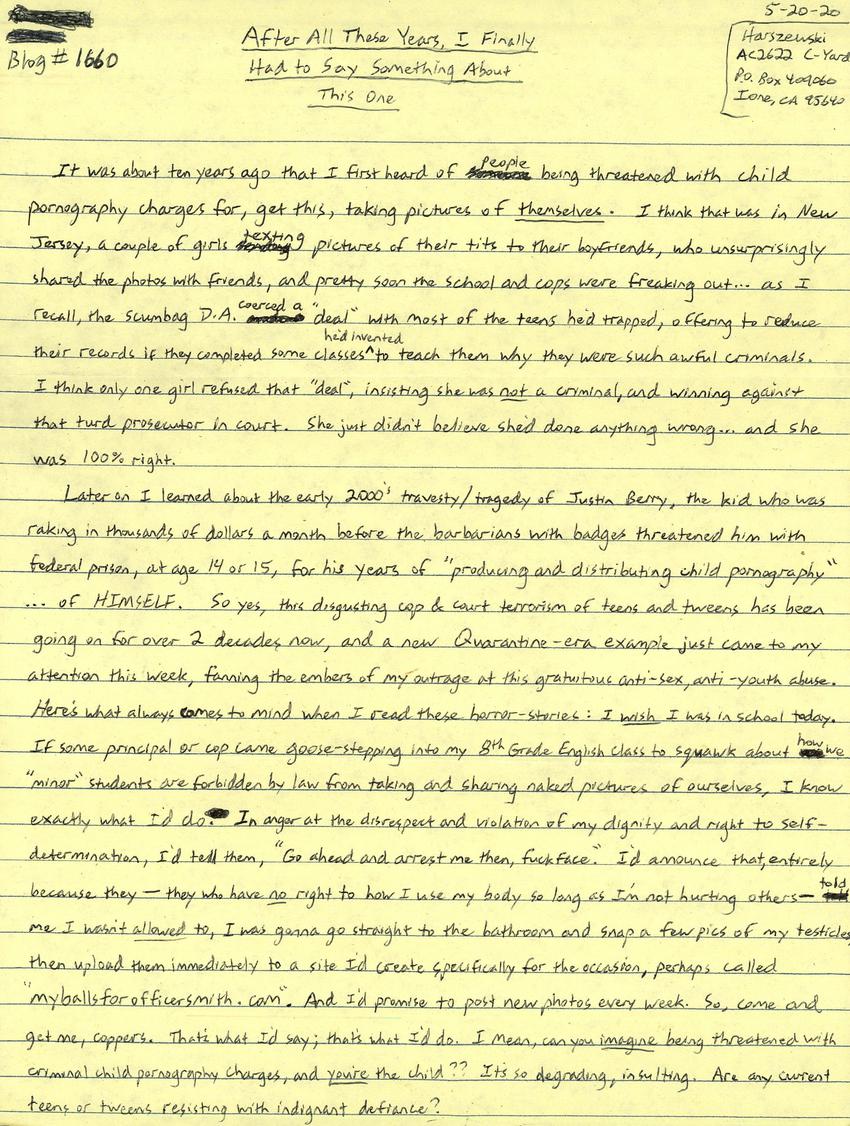 It was about ten years ago that I first heard of people being threatened with child pornography charges for, get this, taking pictures of themselves. I think that was in New Jersey, a couple of girls texting pictures of their tits to their boyfriends, who unsurprisingly shared the photos with friends, and pretty soon the school and cops were freaking out... as I recall, the scumbag D.A coerced a "deal" with most of the teens he'd trapped, offering to reduce their records if they completed some classes he'd invented to teach them why they were such awful criminals. I think only one girl refused that "deal", insisting she was not a criminal, and winning against that turd prosecutor in court. She just didn't believe she'd done anything wrong... and she was 100% right.

Later on I learn about the early 2000's travesty/ tragedy of Justin Berry, the kid who was raking in thousands of dollars a month before the barbarians with badges threatened him with federal prison, at aged 14 or 15, for his years of "producing and distributing child pornography" ... of HIMSELF. So yes, this disgusting cop & court terrorism of teens and tweens has been going on for over 2 decades now, and a new Quarantine-era example just came to my attention this week, fanning the embers of my outrage at this gratuitous anti-sex, anti-youth abuse. Here's what always comes to mind when I read these horror-stories: I wish I was in school today. If some principal or cop came goose-stepping into my 8th Grade English class to squawk about how we "minor" students are forbidden by law from taking and sharing naked pictures of ourselves, I know exactly what I'd do. In anger at the disrespect and violation of my dignity and right to self-determination, I'd tell them, "o ahead and arrest me then, fuckface". I'd announce that, entirely because they - they who have no right to how I use my body so long as I'm not hurting others - told me I wasn't allowed to, I was gonna go straight to the bathroom and snap a few pics of my testicles then upload them immediately to a site I'd create specifically for the occasion, perhaps called "myballsforofficersmith.com". And I'd promise to post new photos every week. So, come and get me, coppers. That's what I'd say; that's what I'd do. I mean can you imagine being threatened with criminal child pornography charges, and you're the child?? It's so degrading, insulting. Are any current tween or tweens resisting with indignant defiance?

The poster is a paedophile.
He was given 600 years.
Now he posts objecting to sentences for his fellow inmates.
Re read some of his past posts, he is clearly fishing for kids. I refer you to his his lists of things he likes things he doesn’t like.


I’m a VERY open minded person. I support inmate issues and I am in contact with several of them. But Between The Bars must NOT allow predators to post and groom.
Someone even had the audacity to transcribe this filth.
Between the bars openly supports,child predators and so does it’s staff.
Please flag this post with me
They are ingnoring my texts,
I’m in contact with Mule Creek Prison where this paedophile currently resides,
Please take this post down, and the others where he supports the sexualisation of minors.
Please share on Facebook and with media organisations
Between the bars is letting down inmates with serious concerns and legal problems. And it supports sexual predators
Thank you.
Update.
I received an email from Charlie DeTar who runs this site. He points out he won’t be taking the offending post down, the post that breaks community guidelines, because he says that Harszeuski has freedom of speech.
Protecting a serial child predators post which targets children, read it, he is calling for ‘tweens’ to resist with defiance.
The boy he is talking about is 14, the boy who photographed himself sexually and distributed those photos to adults. A 14 year old child cannot give consent to a sexualised act, or experience.
Jail and being closeted in protective custody is doing nothing to stop Harszeuskis obvious urges and interest in pedophillia beyond his cell.

Between the bars is a blog site for inmates who want to connect in the world.
Harszeuski with the help of Charlie DeTar is making it a grooming site, a place to fish for ‘tweens’ Nothing to do with free speech, Charlie helping out his blogging friend.

Any of the other inmates who posted on here if they knew their work was being displayed with chomos, paedophiles, I don’t think they would feel confident they were posting on the right platform.

I’ve notified several different agencies about Harszeuski and DeTar. Perhaps they might encourage the site to make the right decision and carefully read through this post in particular, the other ones are fine, and remove it. Removing it is the right and responsible thing to do.

T
Yup. It goes without saying, but since you all but accuse me of it @tenzintenzin, I will say: I categorically disapprove of all forms of child abuse, molestation, psychological manipulation, or grooming, and disapprove of the promotion of any of those things.

However, I also don't believe that this blog post amounts to any of those things.

Some people do very bad, hurtful, and even terrible things, it's true. How do we reduce the likelihood that people will do such things? We've tried locking them up and throwing away the key, and the results have not been good.

@tenzintenzin how would you handle teenagers who take inappropriate pictures of themselves? Do you really think incarceration is an effective way to prevent that?
Charlie DeTar
A 14 child in my country and in yours CANNOT GIVE CONSENT
Here’s the part of the blog you need to re read, because you don’t get it,


“Later on I learn about the early 2000's travesty/ tragedy of Justin Berry, the kid who was raking in thousands of dollars a month before the barbarians with badges threatened him with federal prison, at aged 14 or 15, for his years of "producing and distributing child pornography" ... of HIMSELF. “

he shouldn’t even have named, or even KNOWN the name of the child involved in that case because the law omits the child name for its safely. He is OBVIOUSLY in contact with other paedophiles who are furnishing with this information.

And you transcribed his post. It makes you culpable too. Are you too young to understand the implications of what you are involving yourself with here?
Re read the post. The other two he wrote are fine. There has been some fishing in his past posts. You’ll be pleased to know I coped and pasted them for a well known media outlet.

You, by allowing this, which is against your own guidelines. Are screwing up the great work Between the Bars is doing. They need another moderator. You are clearly clueless. Your role as a human being is to protect people . Protect 14 year old Justin Berry. Protect Dymitri Harszeuski from himself. 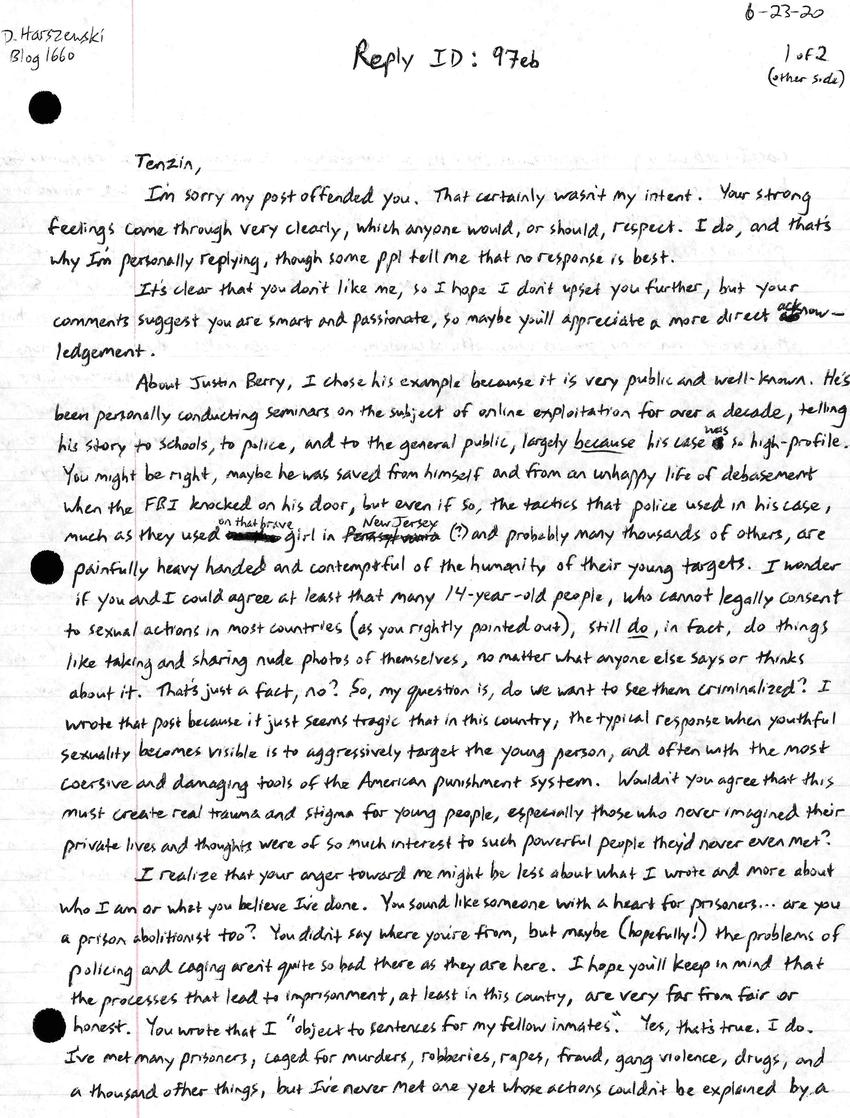 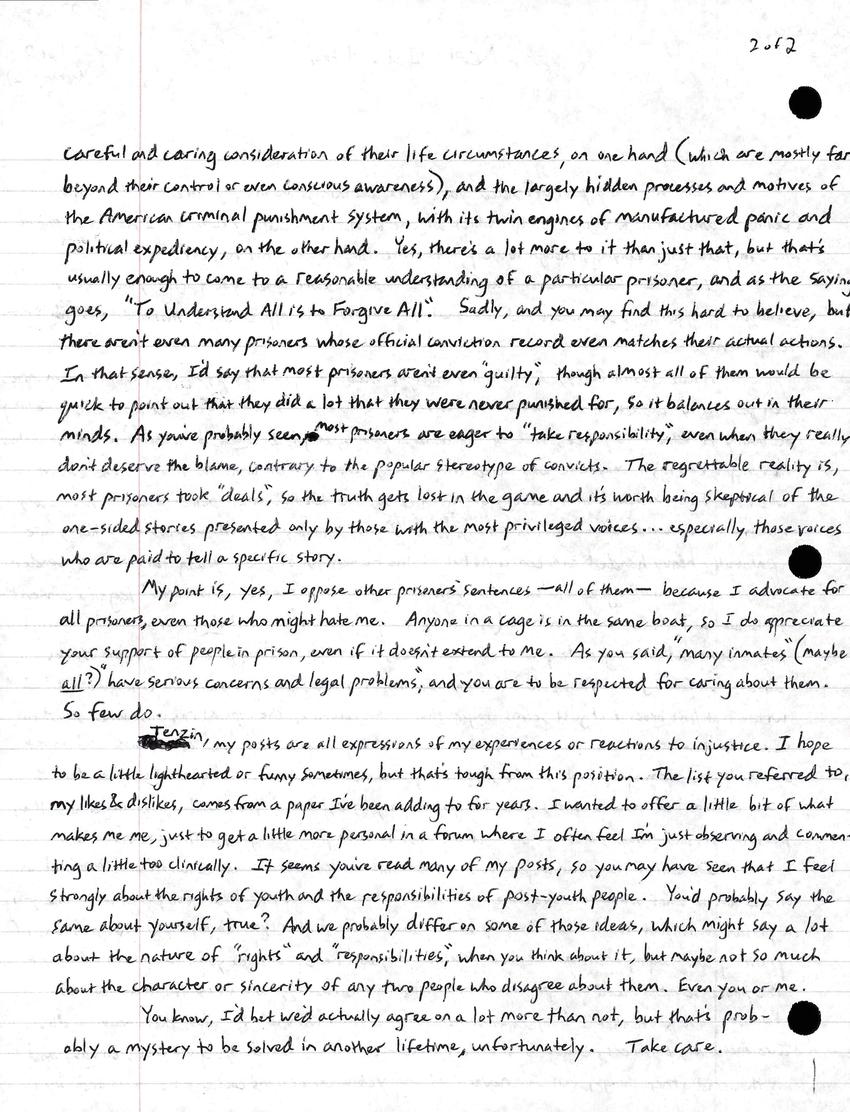 Your letter is a half arsed attempt at ‘politicising’ your indignation that you, one, were caught, and two, want your affiliates out here in the free world to have a better chance of viewing some new photos. You thought you were the smartest person in the room. You never were. You speak of injustice, a trigger word for the liberal hand wringing lefties, of which I am not one. Justice was served. You will never be released. You can’t be released. My acid test is this. How would I feel if you were on the bus sitting next to me one day. Would you present a danger to the people on that bus? The answer is clearly yes.

You are a master manipulator, but you won’t manipulate me,
I’m sure if we met I would discover you are a charming, affable amiable chap. You have to be, thats the bait you used on the outside.
The rights of youth are absolutely none of your business. Nothing at all to do with you. You don’t even understand simple sexual boundaries, youths do not need you as an advocate. Forget about it. You are a coyote, you hunt the youths, they are sheep to you. In no way, shape or form are you a person who should lobby, speak up for, or in deference to young people. It’s like putting an arsonist in charge of a fire station. You don’t get it though. You do not think you ever did anything wrong. In your mind you were just being you. You don’t know who you are. You have no real understanding of the damage you caused in society.
Your posts are full of fishing comments. Unfortunately for you part of my previous career was looking for codes and algorithms in print. I spotted you pretty quickly. You are transparent.

I’m a deeply religious person. I advocate for prisoners rights. I write to several men in long term sentences. I offer them support. What I don’t do is bull sh*t them. Most of us are not the sum parts of our one moment of madness, violence or anger. Captivity isn’t the place for most men. But it is the correct place for you, regardless if you see it that way or not. You are in the right place. Because you cannot control your impulses and society will always be fishing pool for you, compounded by the internet which would probably have served up more,victims to you
You do not understand that you went off like a hand grenade in many children’s lives. You decimated them. You blew families to pieces. You destroyed the ability of many of them to build trusting intimate relationships as adults. You did that. Not just a few either. Many many kids, even the ones that didn’t come forward. Ergo you were sentenced to 600 years.

I have only one question for you.