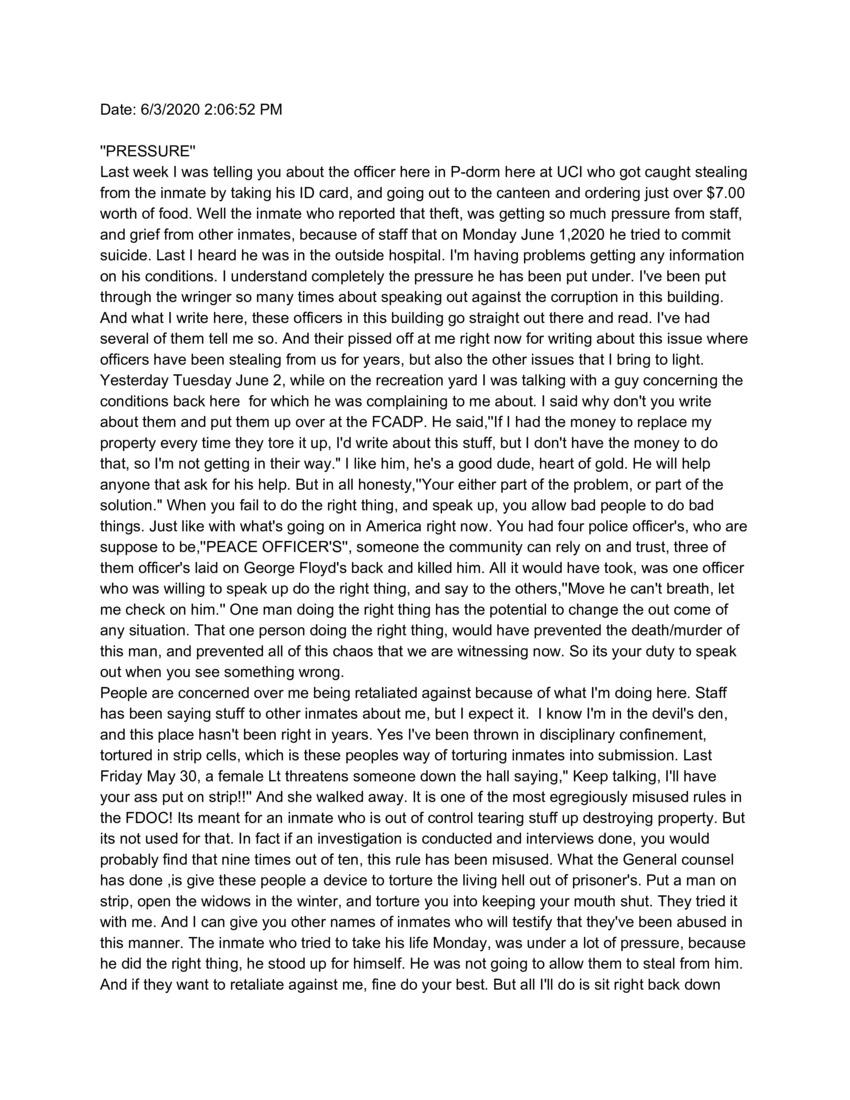 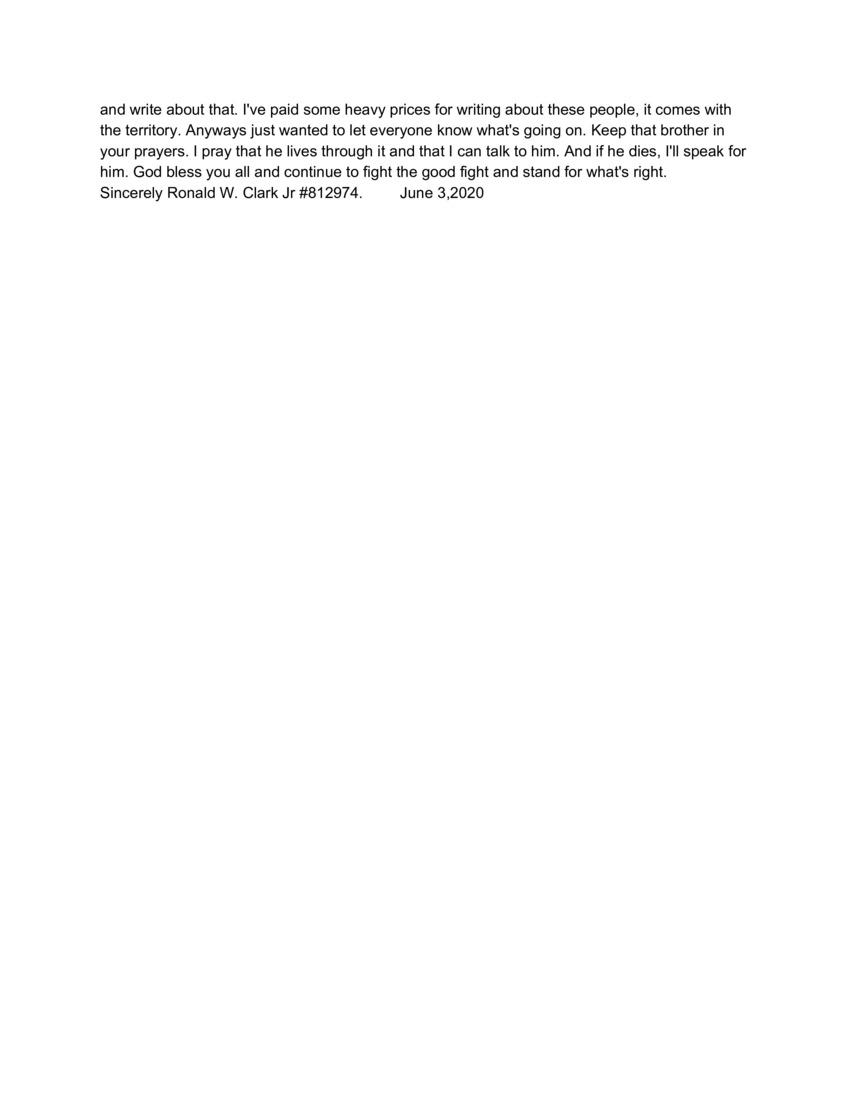 "PRESSURE"
Last week I was telling you about the officer here in P-dorm here at UCI who got caught stealing from the inmate by taking his ID card, and going out to the canteen and ordering just over $7.00 worth of food. Well the inmate who reported that theft, was getting so much pressure from staff, and grief from other inmates, because of staff that on Monday, June 1, 2020 he tried to commit suicide. Last I heard he was in the outside hospital. I'm having problems getting any information on his conditions. I understand completely the pressure he has been put under. I've been put through the wringer so many times about speaking out against the corruption in this building. And what I write here, these officers in this building go straight out there and read. I've had several of them tell me so. And their pissed off at me right now for writing about this issue where officers have been stealing from us for years, but also the other issues that I bring to light. Yesterday, Tuesday, June 2, while on the recreation yard I was talking with a guy concerning the conditions back here for which he was complaining to me about. I said why don't you write about them and put them up over at the FCADP. He said, "If I had the money to replace my property every time they tore it up, I'd write about this stuff, but I don't have the money to do that, so I'm not getting in their way." I like him, he's a good dude, heart of gold. He will help anyone that ask for his help. But in all honesty, "Your either part of the problem, or part of the solution." When you fail to do the right thing, and speak up, you allow bad people to do bad things. Just like with what's going on in America right now. You had four police officer's, who are suppose to be, "PEACE OFFICER'S", someone the community can rely on and trust, three of them officer's laid on George Floyd's back and killed him. All it would have took, was one officer who was willing to speak up and do the right thing, and say to the others, "Move he can't breath, let me check on him." One man doing the right thing has the potential to change the outcome of any situation. That one person doing the right thing, would have prevented the death/murder of this man, and prevented all of his chaos that we are witnessing now. So its your duty to speak out when you see something wrong.

People are concerned over me being retaliated against because of what I'm doing here. Staff has been saying stuff to other inmates about me, but I expect it. I know I'm in the devil's den, and this place hasn't been right in years. Yes I've been thrown in disciplinary confinement, tortured in strip cells, which is these peoples way of torturing inmates into submission. Last Friday, May 30, a female Lt threatens someone down the hall saying, "Keep talking, I'll have your ass put on strip!!" And she walked away. It is one of the most egregiously misused rules in the FDOC! Its meant for an inmate who is out of control tearing stuff up destroying property. But its not used for that. In fact if an investigation is conducted and interviews done, you wold probably find that nine times out of ten, this rule has been misused. What the General counsel has done, is give these people a device to torture the living hell out of prisoner's. Put a man on strip, open the windows int he winter, and torture you into keeping your mouth shut. They tried it with me. And I can give you other names of inmates who will testify that they've been abused in this manner. The inmate who tried to take his life Monday, was under a lot of pressure, because he did the right thing, he stood up for himself. He was not going to allow them to steal from him. And if they want to retaliate against me, fine do your best. But all I'll do is sit right back down and write about that. I've paid some heavy prices for writing about these people, it comes with the territory. Anyways just wanted to let everyone know what's going on. Keep that brother in your prayers. I pray that he lives through it and that I can talk to him. And if he dies, I'll speak for him. God bless you all and continue to fight the good fight and stand for what's right.