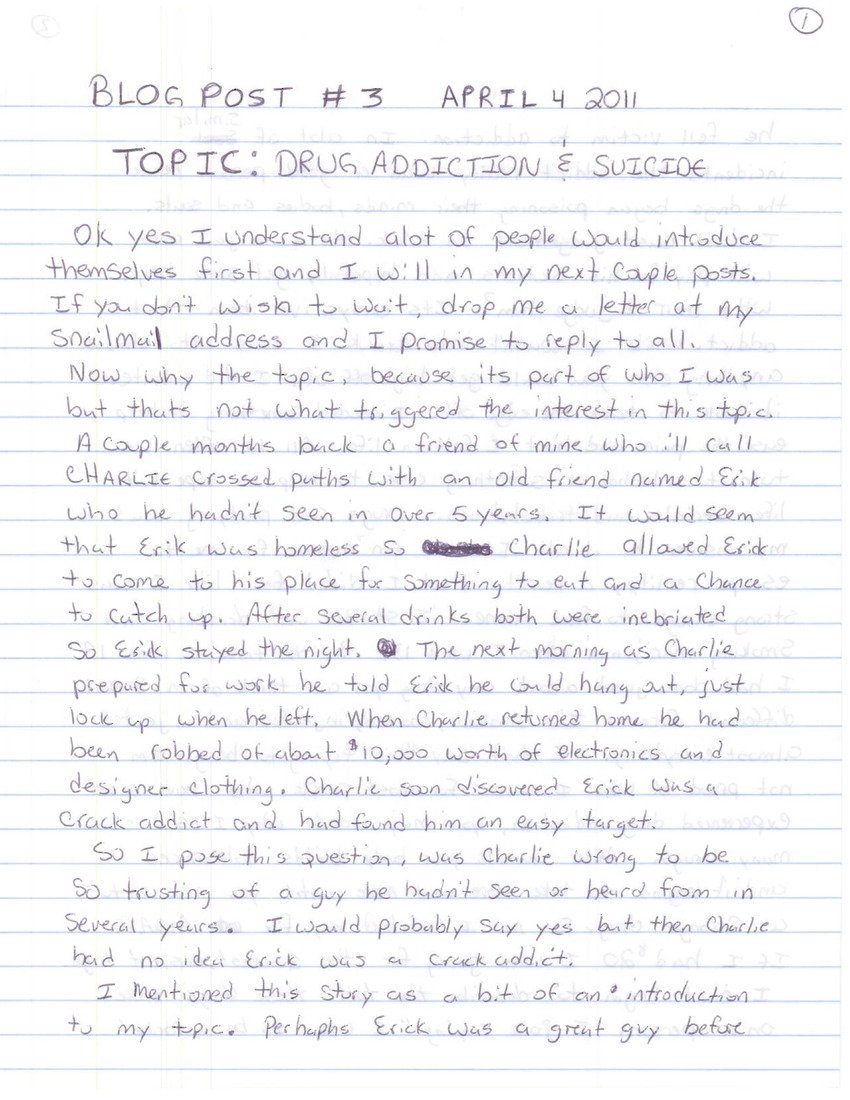 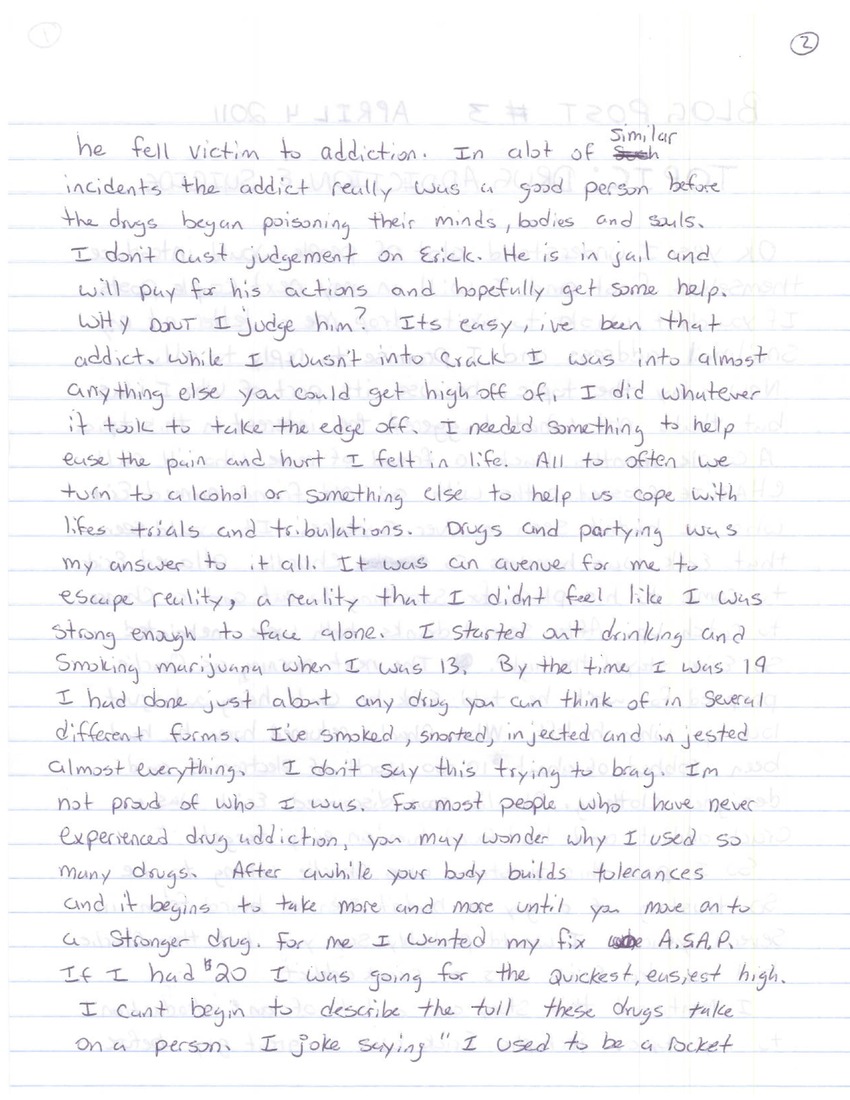 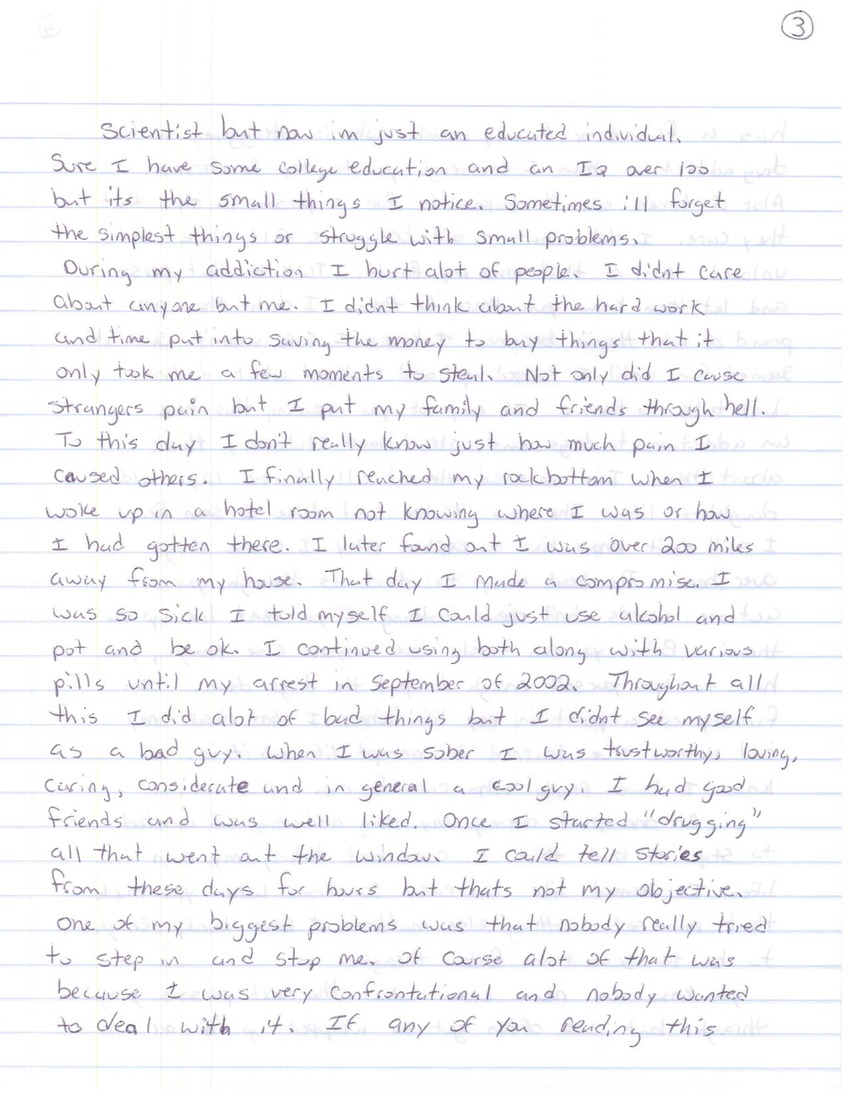 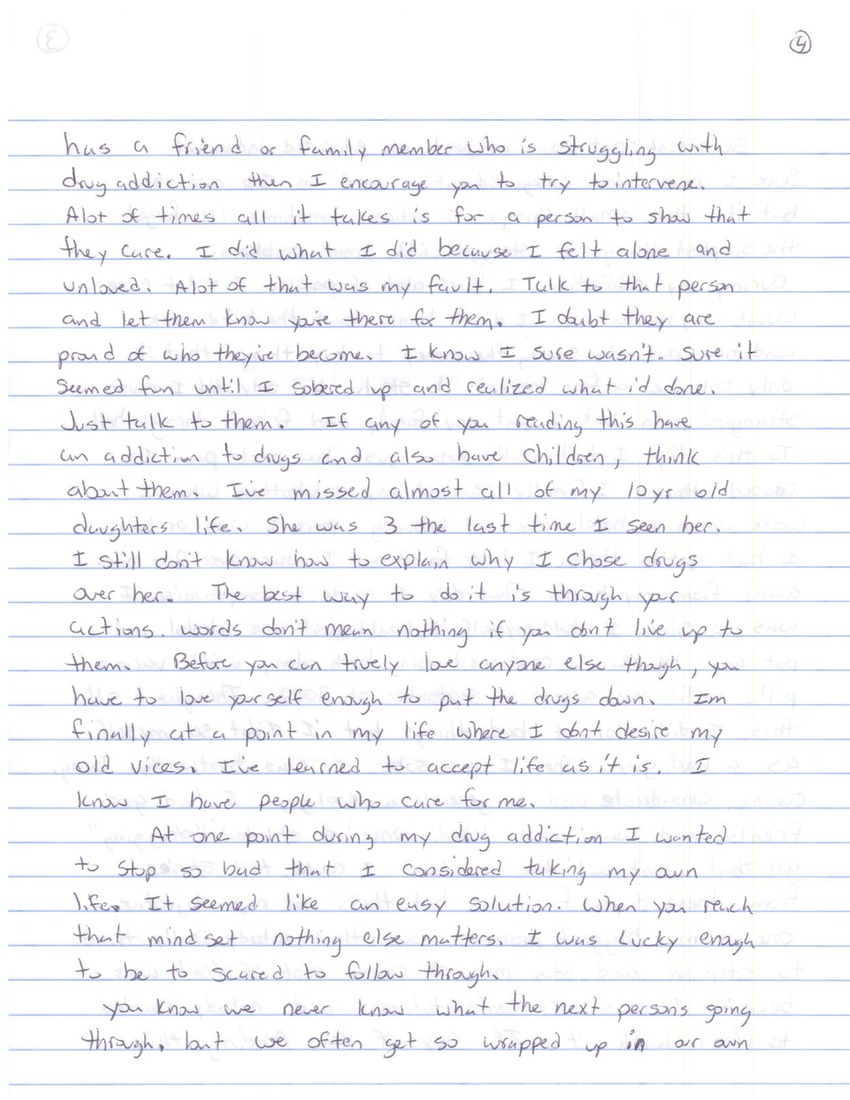 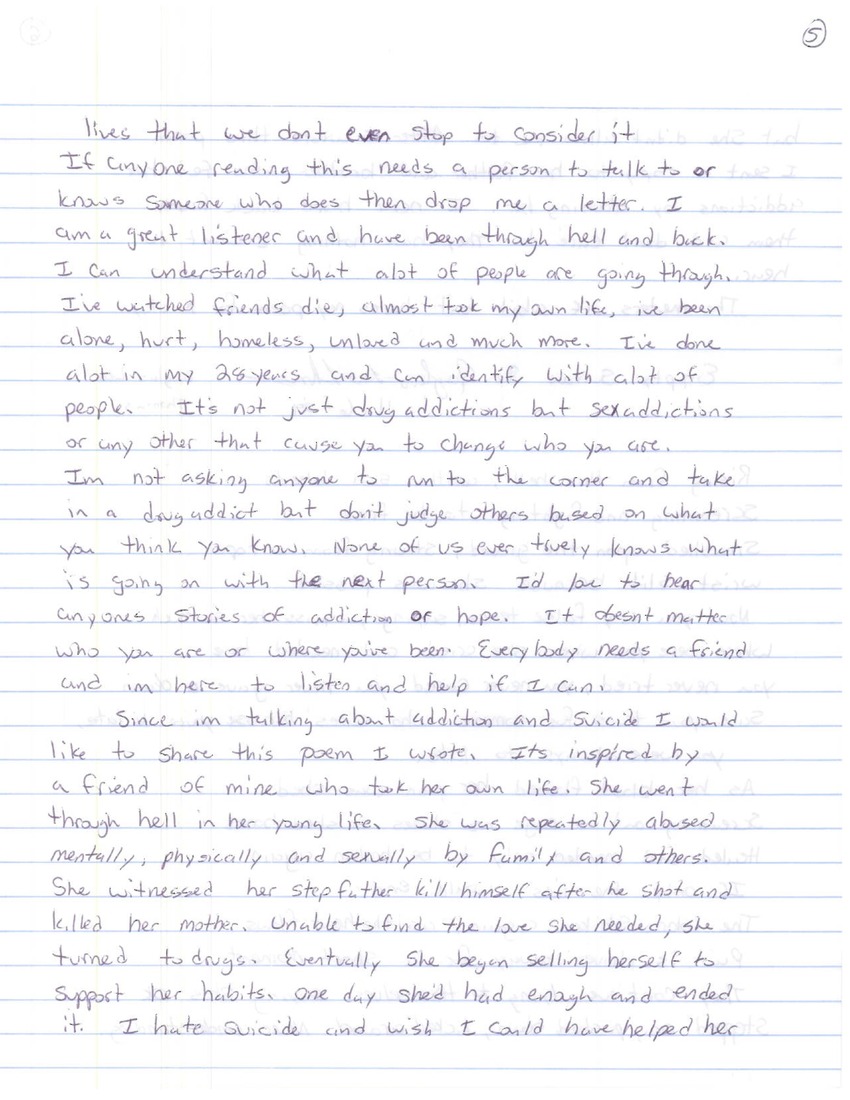 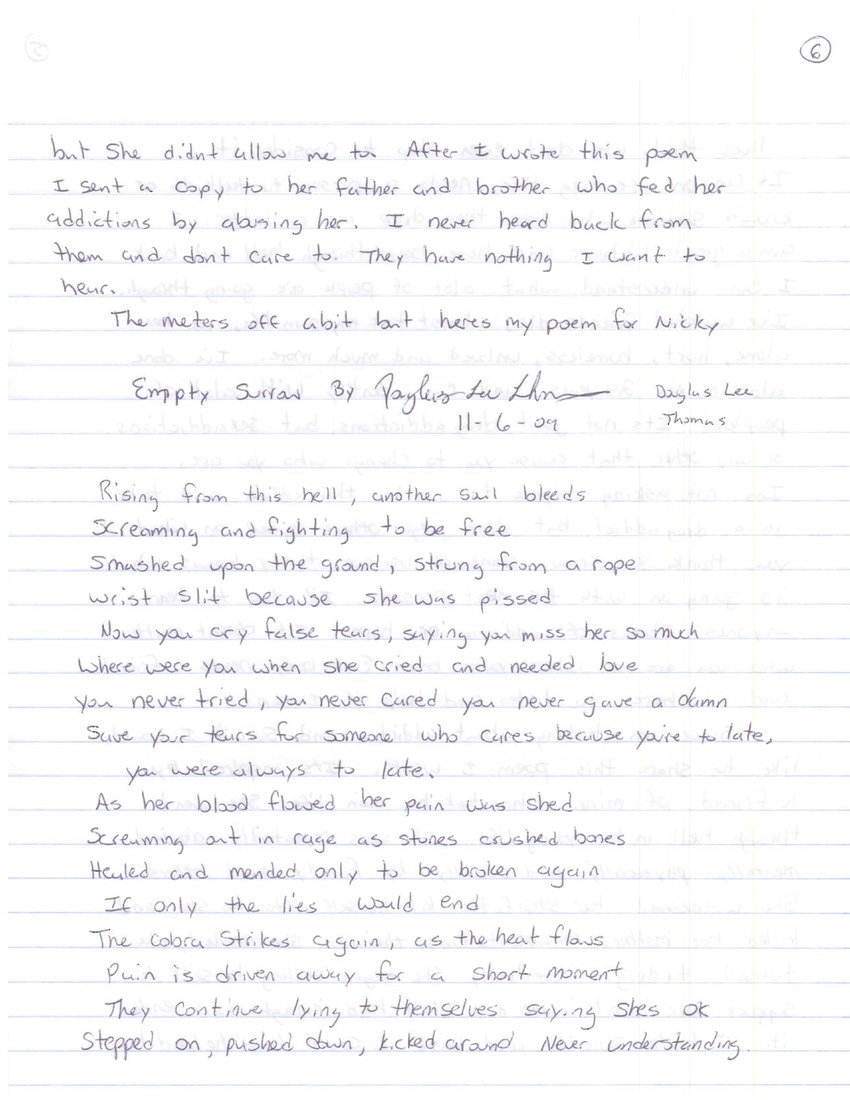 Rising from this hell, another soul bleeds
screaming and fighting to be free
smashed upon the ground, strung from a rope
wrist slit because she was pissed
Now you cry false tears, saying you miss her so much
where were you when she cried and needed love
you never tried, you never cared you never gave a damn
save your tears for someone who cares because you're too late,
you were always too late.

As her blood flowed her pain was shed
screaming out in rage as stones crushed bones
Healed and mended only to be broken again
If only the lies would end
The cobra strikes again, as the heat flows
pain is driven away for a short moment
They continue lying to themselves saying she's ok
stepped on, pushed down, kicked around never understanding.
how your ignorance reflects upon others.
Somewhere her soul screamed to be loved.
Only wanting to be accepted but it was too late.
When it was all said and done you failed again.
With rope stretched tight she said goodby and
another unloved soul drifted off into the night.

A lot of people won't understand this poem or whatever you want to call it but a few will. My message in this blog is you never know what the next person is going through. It never hurts to let those you love, know it. Take a moment out of your day to tell a stranger hello or offer a smile to someone you pass in the store. You'd be amazed at how much a simple "how are you doing?" will change a person's day.
Until next time keep your heads up and always look forward to brighter days. To those who feel lost always know there is someone who cares.

I find that everything you write in you're blog posts are always so honest and it's wonderful. I think it's great that you admit to the 'silly' things in you're past and be wide opened through social networking.

This one post hits me an awful lot. I feel like its relates to someone very close to me, my sister. I believe that every word you said about being there for someone, and just talking to them and basically every thing you said to the very end is exactly right. My older sister, now 21, is a drug addicted. She also started at a very young age when we moved she did start hanging around the wrong people but I believe that is was something to do with a past 'situation' that happened when she was little, it didn't involve family but basically a stranger. I remember when I was 10, being around her and her friends all high as a kite and also being the time I caught my sister, cutting and not really knowing what to do really gave me mixed signals so when i hit highschool i thought thats what i was meant to be doing, doing drugs, drinking constantly but i got my head screwed on pretty fast and realised that wasn't the path i wanted for myself. That was also because of my sister telling me that 'she had made many mistakes and she wont let me become her' All the silly things my sister has done just to get whatever she can get her hands, really did break down my family and still is to a extinict. Although through all the shit she caused my mum, dad and myself. All the fights, no matter what we still stuck by her, my parents still do/did everything they possibly can. Sticking by her, through hard times did get her to sobered up, she got a steady job and life went back to normal. It latest for two years, I don't know what went wrong, I don't really care because I know, no matter what my big sister is still there. And she's still has a good heart. When I do see her or even if I don't I'm still texting/calling her making sure she's alright, making sure she knows I'm here, it's does help. (to anyone reading this comment it really does help if you are in a similar situation) It was easier before, now she's 21 my parents don't have any legal right to help her really, besides very minor things. I can't trust my sister without thinking shes going to steal, or do something just to feed her drug habit. But I know I count on her being their for me, because she always has, just us being their for each other. Although it may sound silly.

Sorry for my extremely long rant, but I'm glad I came across you're post. It did help me, and it may have proven to me that I might be doing the right thing.