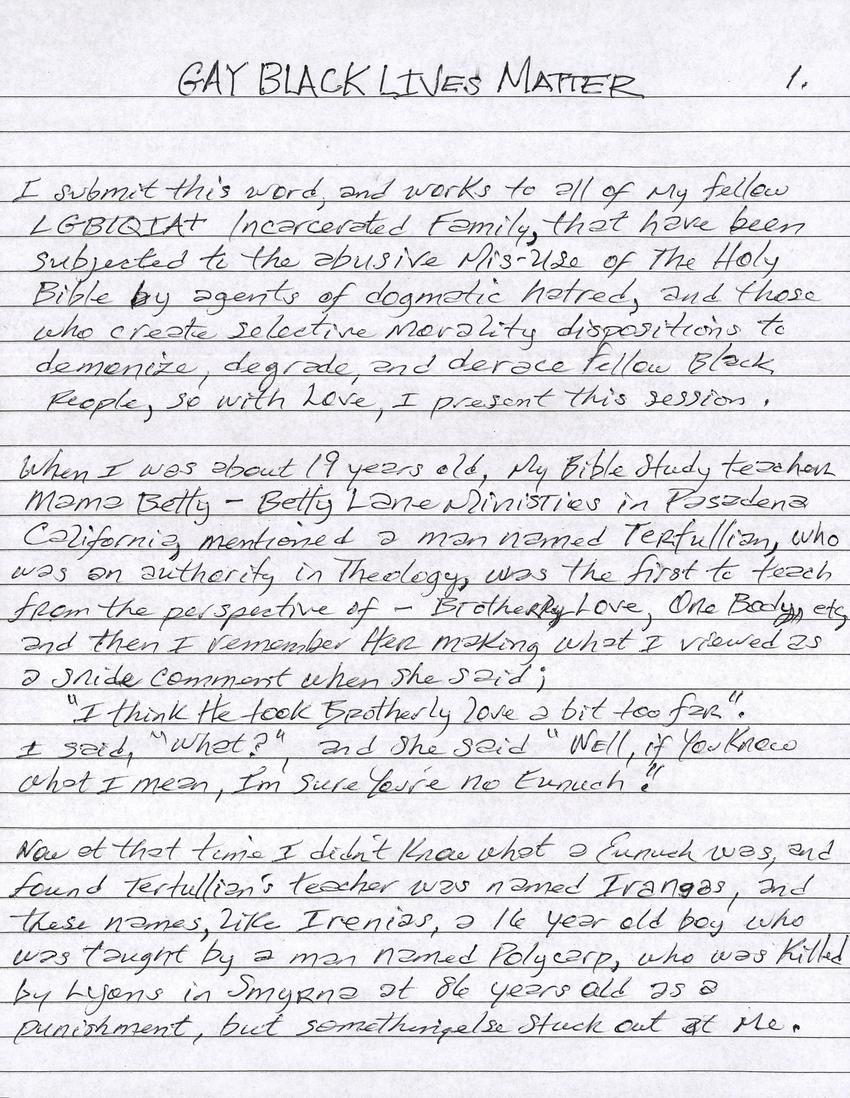 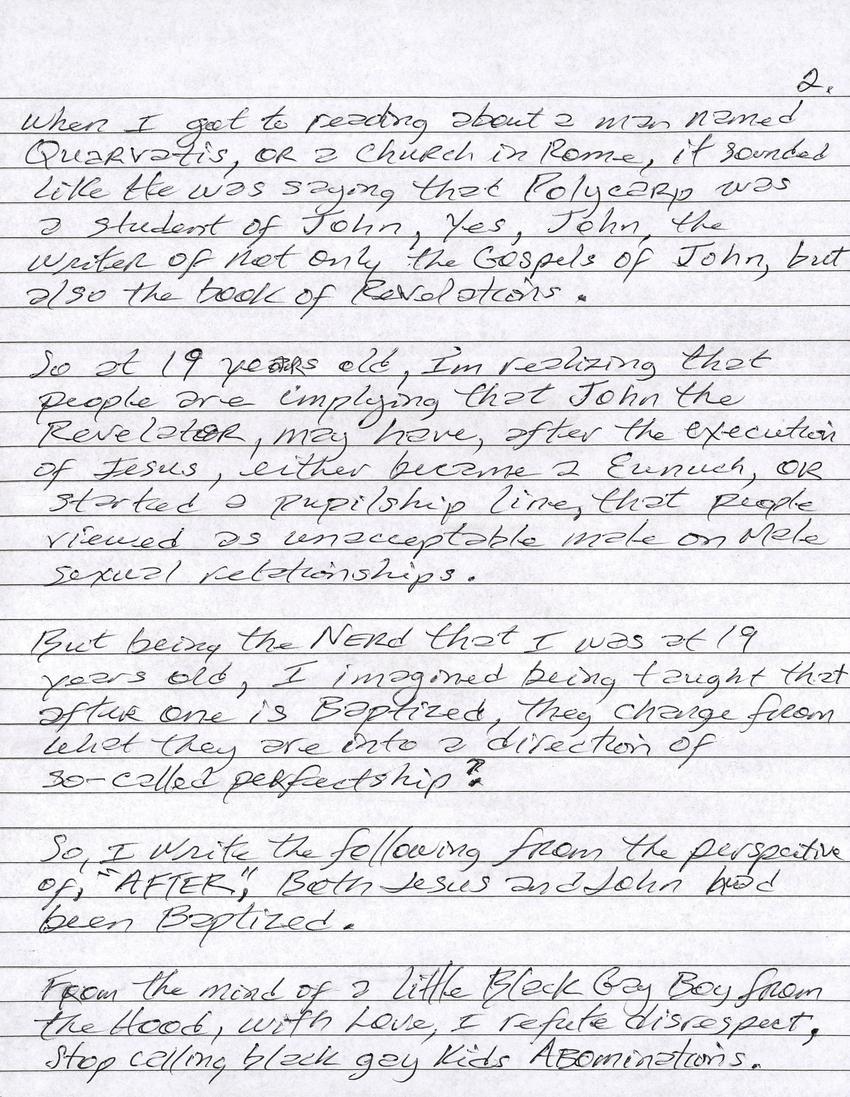 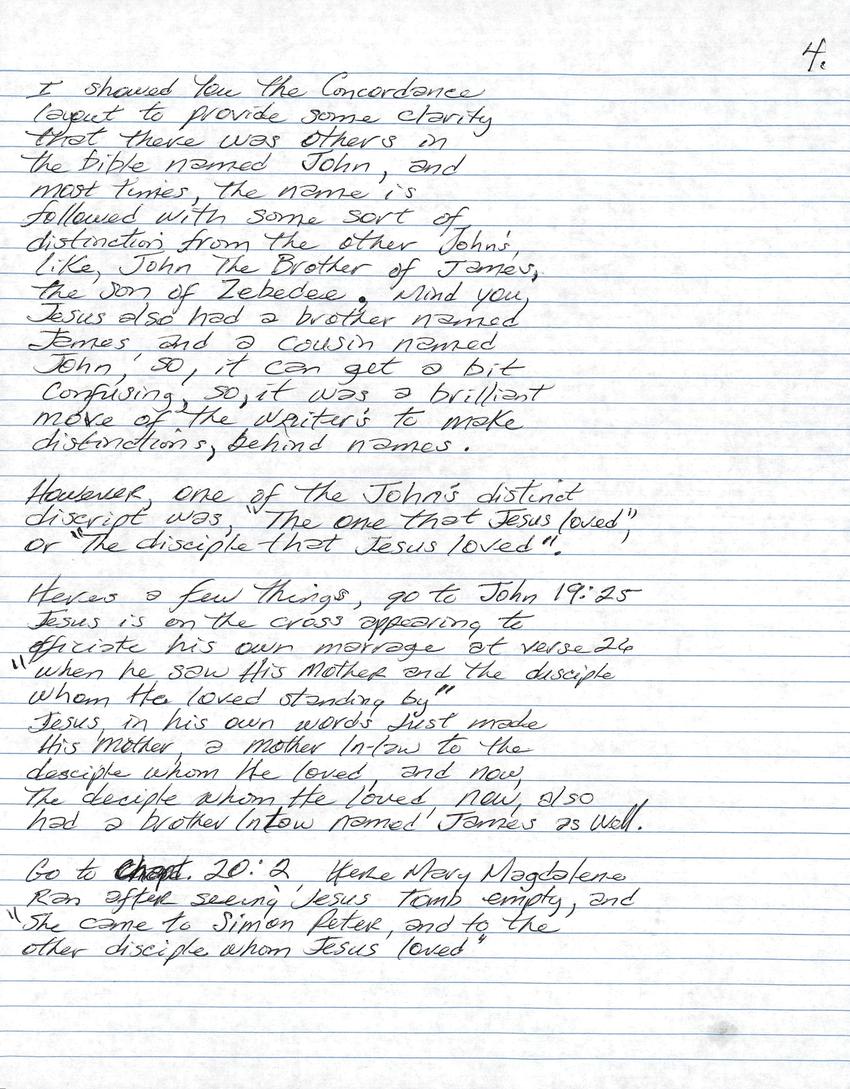 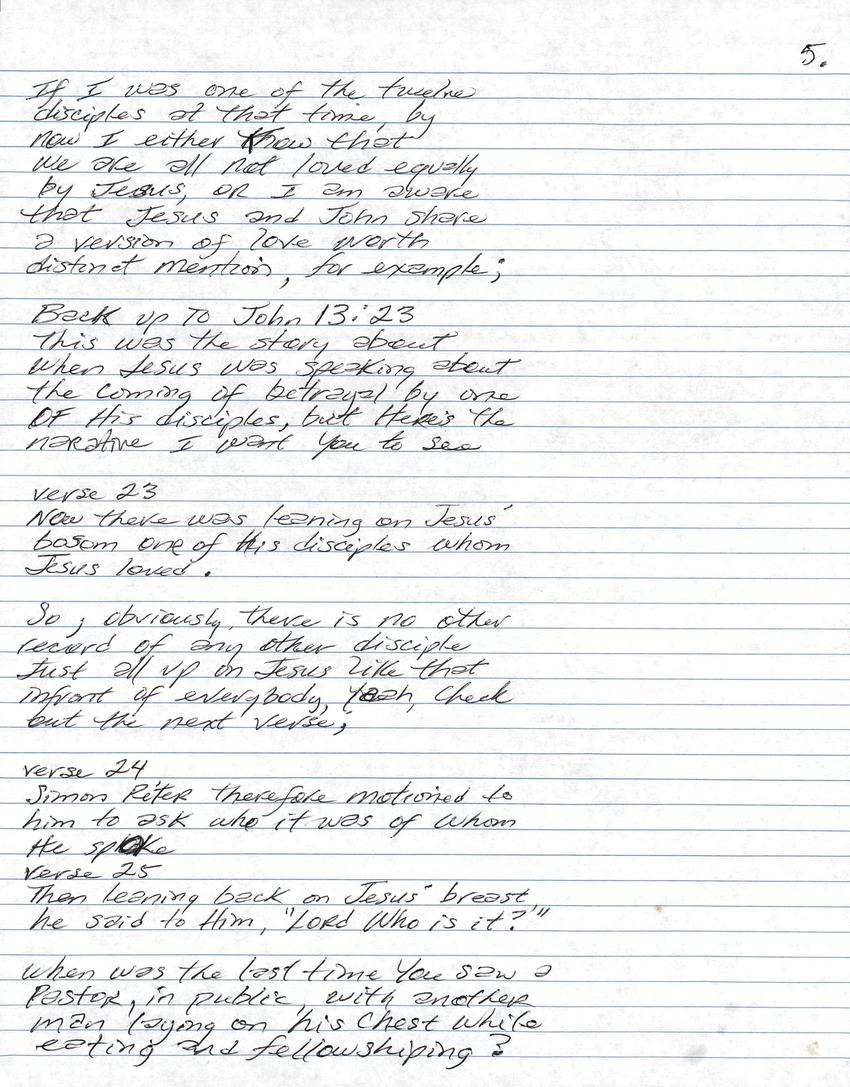 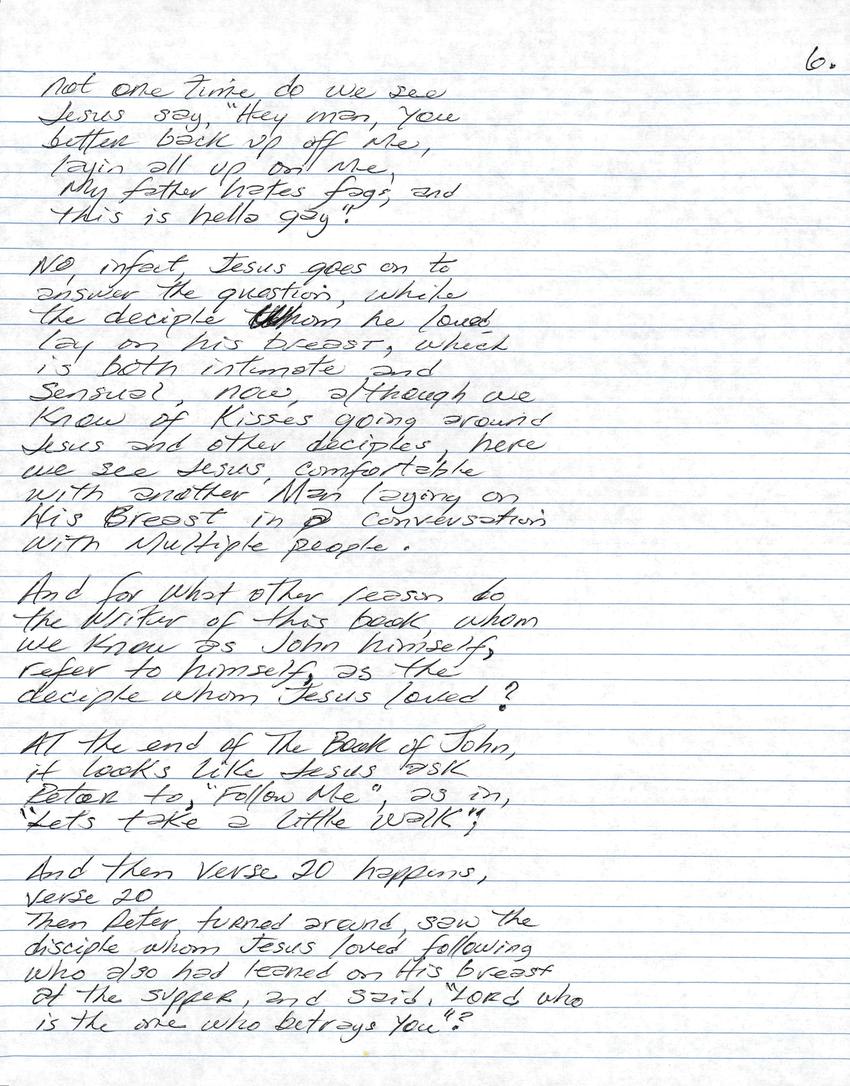 GAY BLACK LIVES MATTER 1.
I submit this word, and works to all of my fellow
LGBTQIA+. Incarcerated Family, that have been
subjected to the abusive mis-use of The Holy
Bible by agents of dogmatic hatred, and those
who create selective morality dispositions to
demonize, degrade, and derace fellow Black
People, so with love, I present this session.

When I was about 19 years old, my Bible Study teacher
Mama Betty - Betty Lane Ministries in Pasadena
California, mentioned a man named Tertullian, who
was on authority in Theology, was the first to teach
from the perspective of - Brotherly Love, One Body, etc,
and then I remember Her making what I viewed as
a snide comment when she said;
"I think He took Brotherly love a bit too far".
I said, "What?" and She said "Well, if you know
what I mean, I'm sure you're no Eunuch."

Now at that time I didn't know what a Eunuch was, and
found Tertullian's teacher was named Irangas, and
these names, like Irenias, a 16 year old boy who
was taught by a man named Polycarp, who was killed
by Lyons in Smyrna at 86 years old as a
punishment, but something else stuck out at me.
2.
When I got to reading about a man named
Quarvatis, or a Church in Rome, it sounded
like He was saying that Polycarp was
a student of John, yes, John, the
writer of not only the Gospels of John, but
also the book of Revelations.

So at 19 years old, I'm realizing that
people are implying that John the
Revelator, may have, after the execution
of Jesus, either became a Eunuch, or
started a pupilship line, that people
viewed as unacceptable male on male
sexual relationships.

But being the Nerd that I was at 19
years old, I imagined being taught that
after one is Baptized, they change from
what they are into a direction of
so-called perfect ship?

So, I write the following from the perspective
of, "AFTER", Both Jesus and John had
been Baptized.

From the mind of a little Black Gay Boy. from
the Hood, with love, I refute disrespect,
stop calling black gay kids Abominations.
3.
Being Baptized doesn't changes what
you are, as a skintone, color of
hair and eyes, size of breast,
penis, or testosterone or estrogen
levels, or add or subtract
virility levels.

Being dipped into a symbolic grave
and being cleansed by a symbolic
resurrection, has absolutely nothing
to do with ones sexual orientation.

The remission of sin can be applied to
the misuse of anyones gender, as
we as humans are well documented
as misusing our sexualities, skillsets,
opinions, education and influence.

Those who call LGBTQ people abominations
sound exactly like the rest of the
heterosexual parents that give birth
to LGBTQ children, and should continue
reading the list of abominations and
sins to find themselves on that very
same list, cowards.

By the evidence of my study, I find that
Jesus of Nazareth and John the son of
Zebedee, and the brother of James who
the lord called "sons of thunder", was
in fact, a same sex married couple with
Jesus officiating his own marriage while
being persecuted at golgotha.

So ever time I see a protester holding up
a sign that says "God hates fags,"
I think about the book of John.
I showed you the Concordance
layout to provide some clarity
that there was others in
the bible named John, and
most times, the name is
followed with some sort of
distinction from the other Johns
the son of Zebedee, mind you,
Jesus also had a brother named
James, and a cousin named
John, so, it can get a bit
confusing, so, it was a brilliant
move to the writers to make
distinctions, behind names.

Go to chapt. 20:2, here Mary Magdalene
ran after seeing Jesus tomb empty, and
"she came to Simon Peter, and to the
other disciple whom Jesus loved"

If I was one of the twelve
disciples of that time, by
now I either know that
we are all not loved equally
by Jesus, or I am aware
that Jesus and John share
a version of love worth
distinct mention, for example;

Back up to John 13:23
This was the story about
when Jesus was speaking about
the coming of betrayal by one
of His disciples, but here's the
narrative I want you to see

verse 23
Now there was leaning on Jesus
bosom one of His disciples whom
Jesus loved.

So, obviously there is no other
record of any other disciple
just all up on Jesus like that
infront of everybody, yeah, check
but the next verse,

verse 24
Simon Peter therefore motioned to
him to ask who it was of whom
he spoke
verse 25
Then leaning back on Jesus breast
he said to Him, "Lord who is it?"

when was the last time you saw a
pastor, in public, with another
man laying on his chest while
eating and fellowshipping?
not one time do we see
Jesus say, "Hey man, you
better back up off me,
layin all up on me,
my father hates fags, and
this is hella gay."

No in fact Jesus goes on to
answer the question, while
the disciple who he loved
lay on his breast, which
is both intimate and
sensual, now, although we
know of kisses going around
Jesus and other disciples, here
we see Jesus, comfortable
with another man laying on
his breast in a conversation
with multiple people.

And for what other reason do
the writer of this book, when
we know as John himself,
refer to himself, as the
disicple whom Jesus loved?

At the end of The Book of John,
it looks like Jesus ask
Peter to, "Follow Me", as in
"Let's take a little walk,"

And then verse 20 happens,
verse 20
Then Peter, turned around, saw the
the disciple whom Jesus loved following
who also had leaned on His breast
at the supper, and said, "Lord who
is the one who betrays you?"

verse 21
Peter seeing him said to Jesus,
"But lord, what about this man?"
verse 21 is like what we always hear about those who other people just can't figure out,
but check out Jesus's response

verse 22
Jesus said to him,
"If I will that he remain
till I come what is it to you?
You follow me."

Wow, checkmate, in yo face,
and still today, people just
can't mind their own business
because, instead fo following
Jesus, they keep looking around
and trying to figure out
why others follow the same Jesus.

If nothing else was made clear,
The Book of John presented
love from Jesus to another
man in a way that is
distinctive from other versions
of Jesus expression of love
for others.

Verse 24
This is the disciple who testifies of
these things, and wrote these things
and we know that his testimony
is true.

Ooooh, and wow, because if God hates
fags, then idiots are saying God so
hated Jesus, and that's, not, true.

So, yes, John himself is
saying that He wrote
This Book, and it's true,
and I take this man
at his word, not the word
of people who hate gays.
So now, what about this man?
We know for a fact that
he is the disciple that
Jesus loved.

Reminds me of how much
God loved Enoch, oooh,
did I just write that?
God loved Enoch so much that
God took Enoch for Himself
Jesus loved John so much
that while hanging on a
cross, He came out to
His mother and made his
relationship to John
official, the first gay marriage?

From the date of his birth, to the date
of his execution, the only evidence in
the Bible of Jesus being involved in
an intimate physical loving relationship
with another human being was with
another man, named John, the
the disciple that Jesus loved, in fact
every moment described in the Bible
between Jesus and John, took place
after both Jesus and John was
baptized, as evidence for those of
us that are taught that baptism
is supposed to change our sexual
orientation identity.
Black Gay Lives Matter.