George Orwell would be smiling... or crying 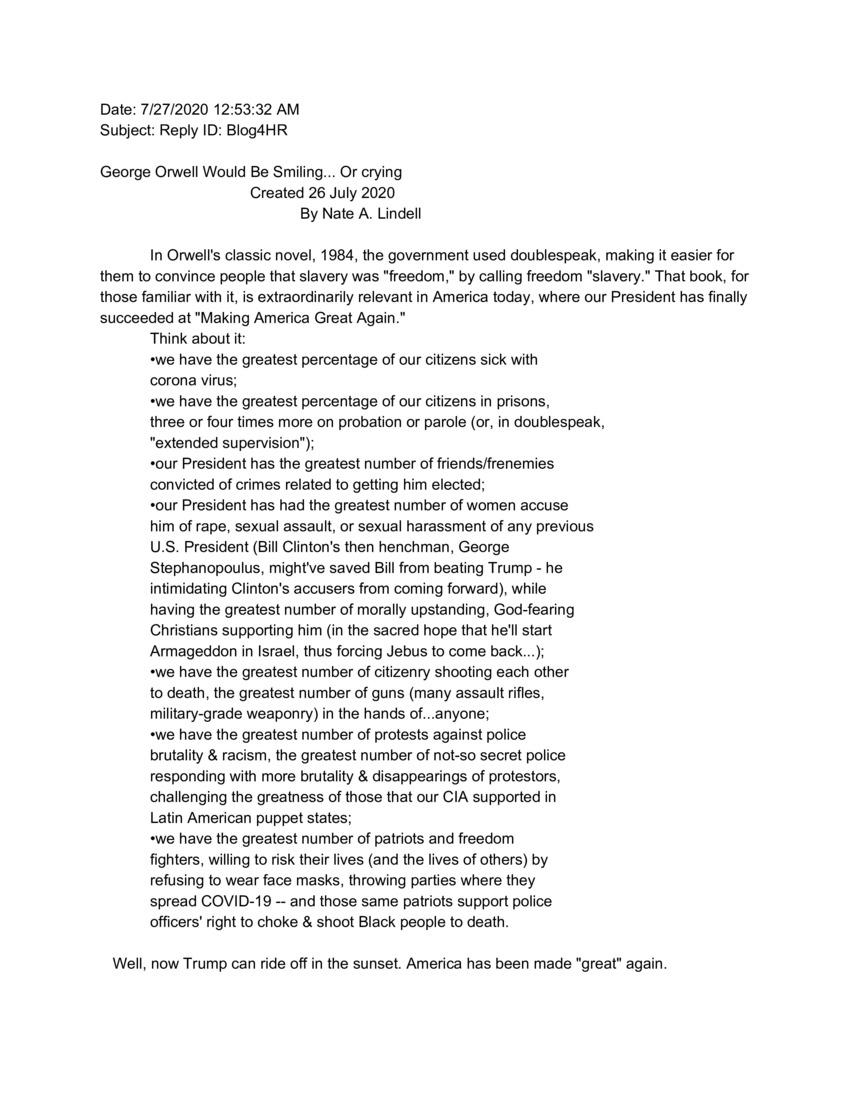 George Orwell Would Be Smiling...Or crying
Created 26 July 2020
By Nate A. Lindell

In Orwell's classic novel, 1984, the government used doublespeak, making it easier for them to convince people that slavery was "freedom," by calling freedom "slavery." That book, for those familiar with it, is extraordinarily relevant in America today, where our President today has finally succeeded at "Making America Great Again."
Think about it:
we have the greatest percentage of our citizens in prisons,
three or four times more on probation or parole (or, in doublespeak,
"extended supervision");
our President has the greatest number of friends/frenemies
convicted him of rape, sexual assault, or sexual harassment of any
previous U.S. President (Bill Clinton's then henchman, George
Stephanopoulus, might've saved Bill from beating Trump - he
intimidating Clinton's accusers from coming forward). while
having the greatest number of morally upstanding, God-fearing
Christians supporting him (in the sacred hope that he'll start
Armageddon in Israel, thus forcing Jebus to come back...);
we have the greatest number of guns (many assault rifles,
military-grade weaponry) in the hands of...anyone;
we have the greatest number of protests against police
brutality and racism, the greatest number of not-so secrete police
responding with more brutality and disappearings of protestors,
challenging the greatness of those that our CIA supported in
Latin American puppet states;
we have the greatest number of patriots and freedom
fighters, willing to risk their lives (and the lives of others) by
refusing to wear face masks, throwing parties where they
spread COVID-19 -- and those same patriots support police
officers' right to choke and shoot Black people to death

Well, now Trump can ride off in the susnet. America has been made "great" again.