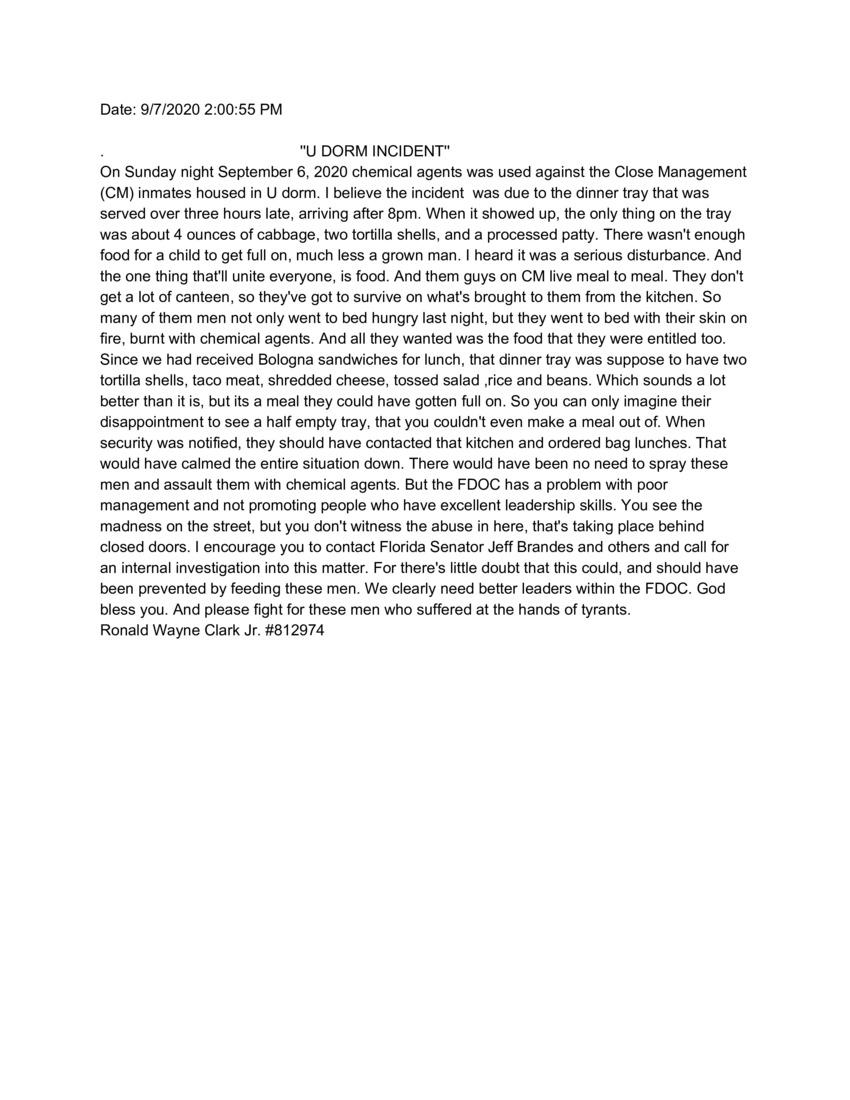 On Sunday night September 6, 2020 chemical agents was used against the Close Management (CM) inmates housed in U dorm. I believe the incident was due to the dinner tray that was served over three hours late, arriving after 8pm. When it showed up, the only thing on the tray was about 4 ounces of cabbage, two tortilla shells, and a processed patty. There wasn't enough food for a child to get full on, much less a grown man. I heard it was a serious disturbance. And the one thing that'll unite everyone, is food. And them guys on CM live meal to meal. They don't get a lot of canteen, so they've got to survive on what's brought to them from the kitchen. So many of them men not only went to bed hungry last night, but they went to bed with their skin on fire, burnt with chemical agents. And all they wanted was the food that they were entitled too. Since we had received Bologna sandwiches for lunch, that dinner tray was suppose to have two tortilla shells, taco meat, shredded cheese, tossed salad, rice and beans. Which sounds a lot better than it is, but its a meal they could have gotten full on. So you can only imagine their disappointment to see a half empty tray, that you couldn't even make a meal out of. When security was notified, they should have connected that kitchen and ordered bag lunches. That would have calmed the situation down. There would have been no need to spray these men and assault them with chemical agents. But the FDOC has a problem with poor management and not promoting people who have excellent leadership skills. You see the madness on the street, but you don't witness the abuse in here, that's taking place behind closed doors. I encourage you to contact Florida Senator Jeff Brandes and others and call for an internal investigation into this matter. For there's little doubt that this could, and should have been prevented by feeding these men. We clearly need better leaders within the FDOC. God bless you. And please fight for these men who suffered at the hands of tyrants.
Ronald Wayna Clark Jr. #812974