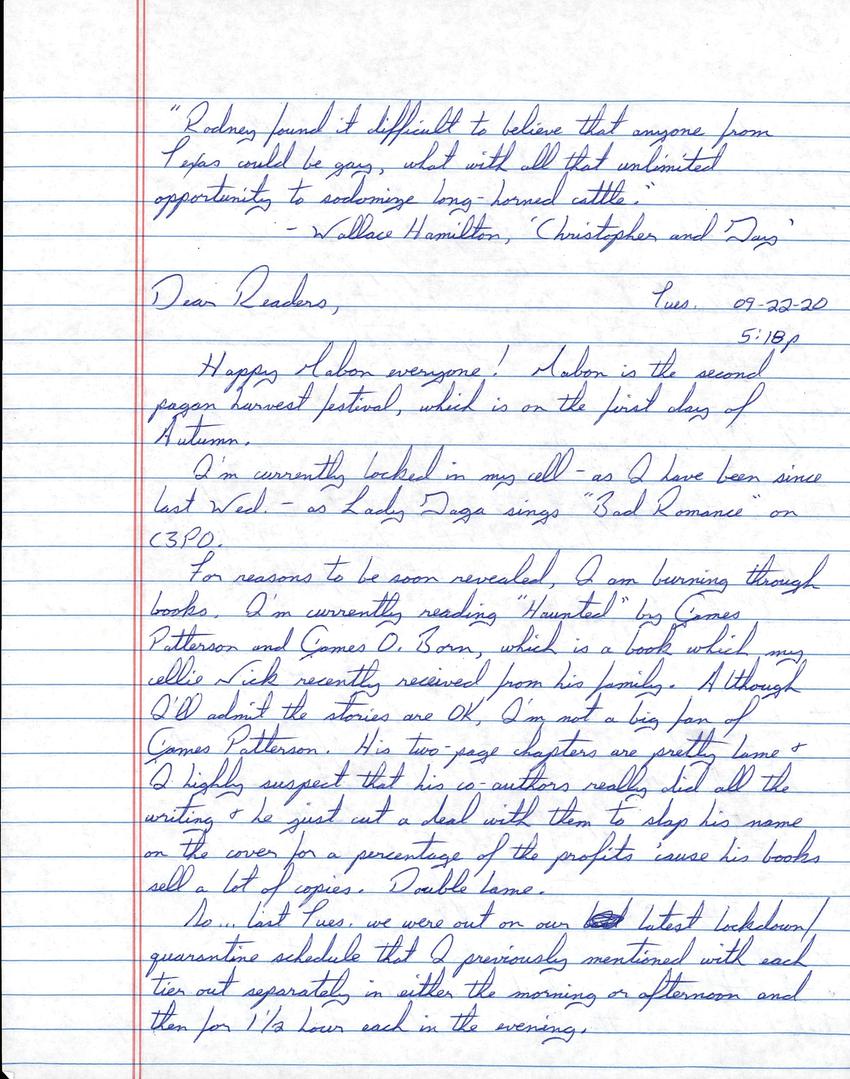 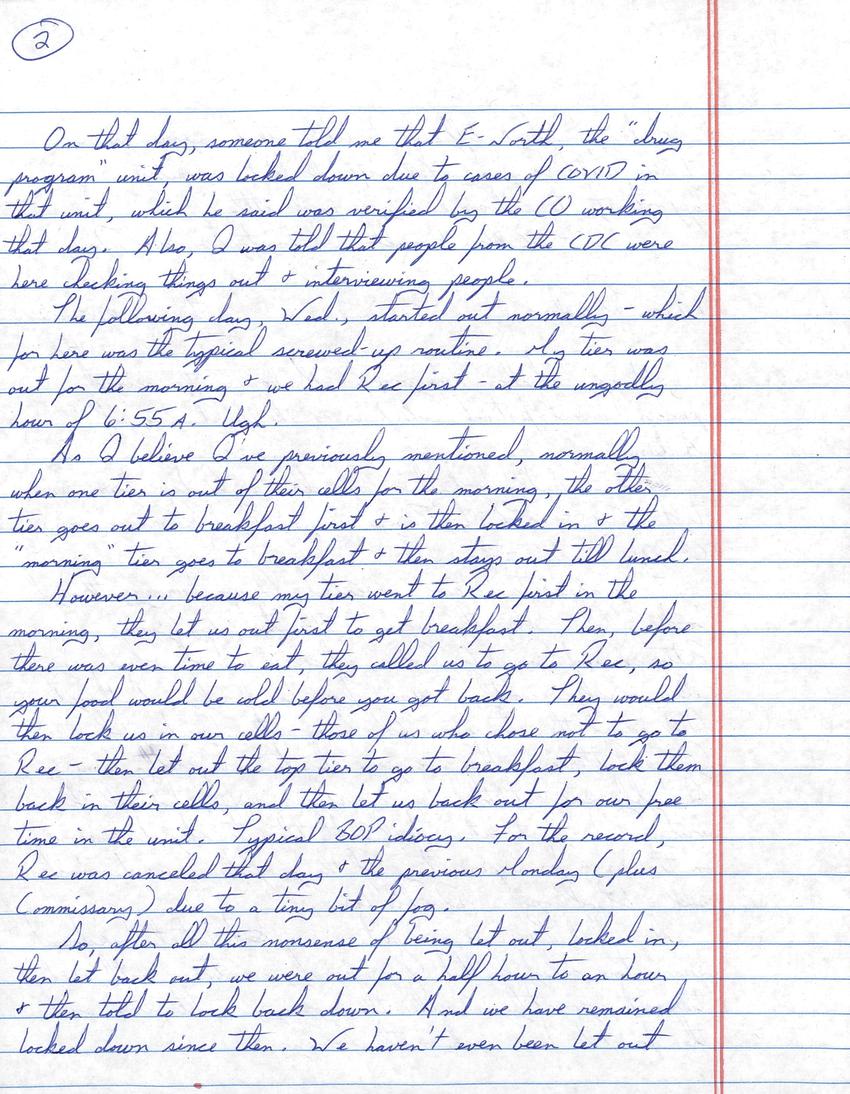 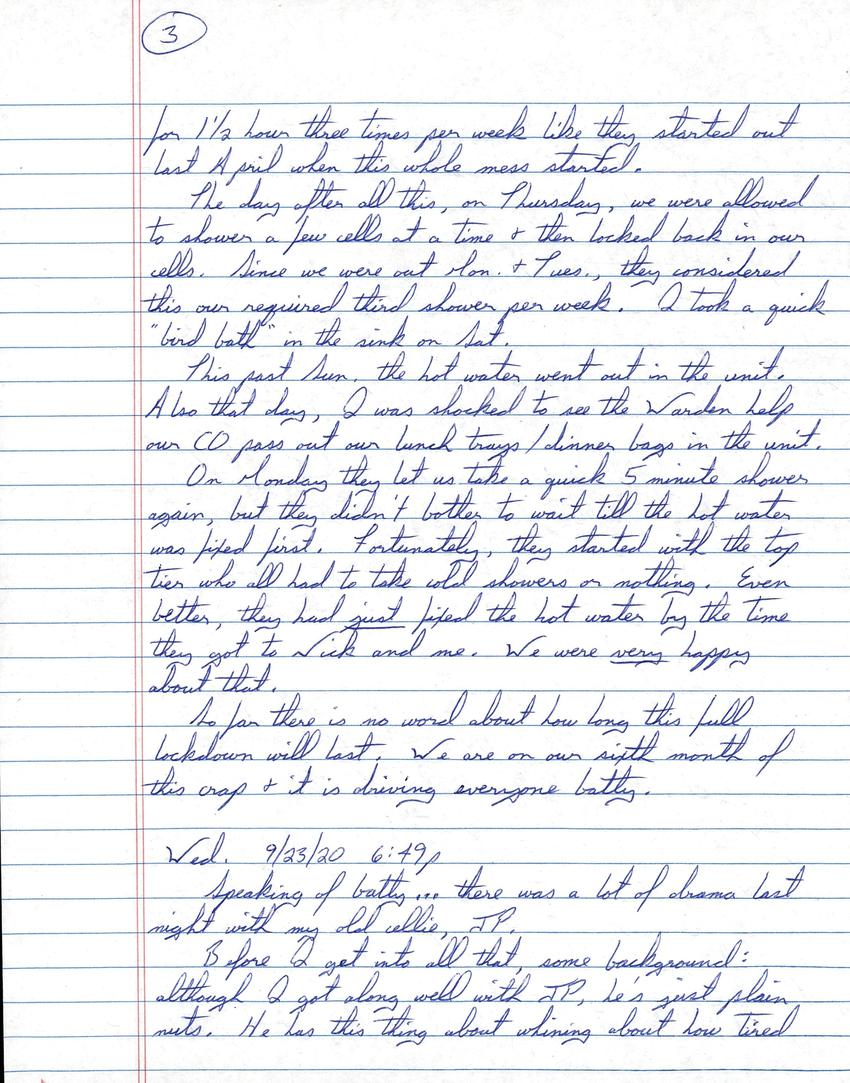 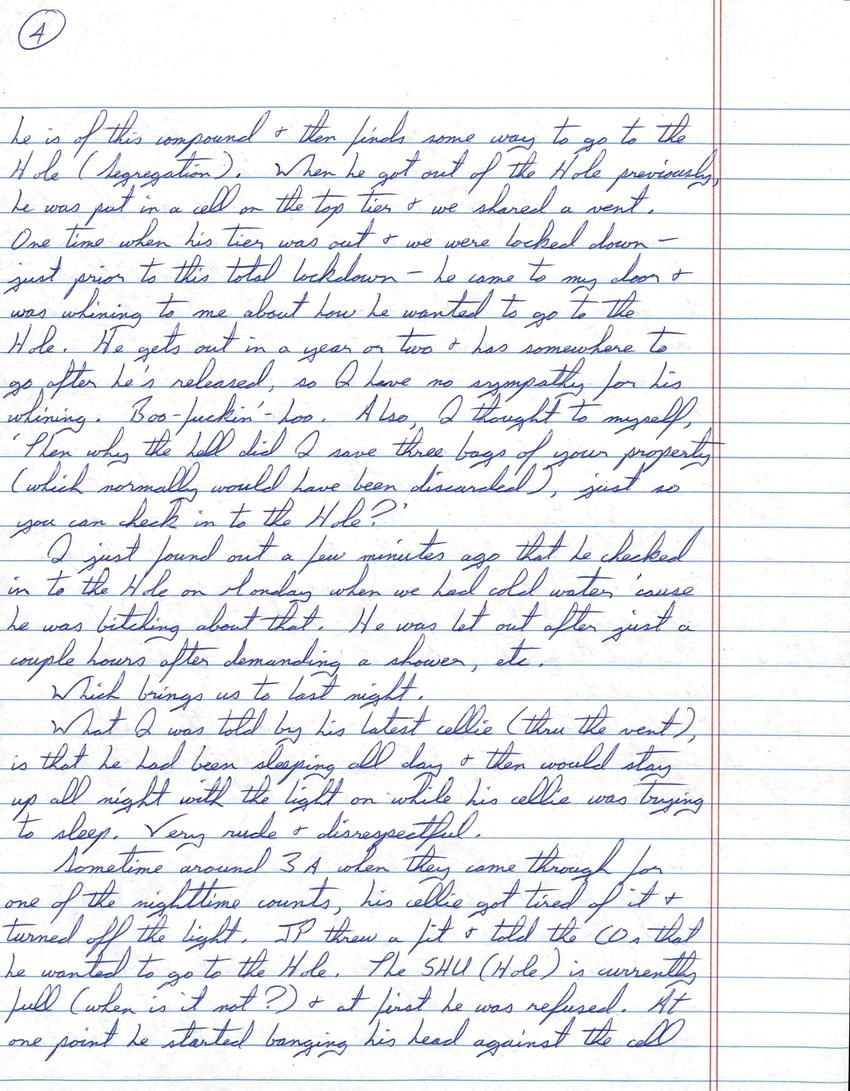 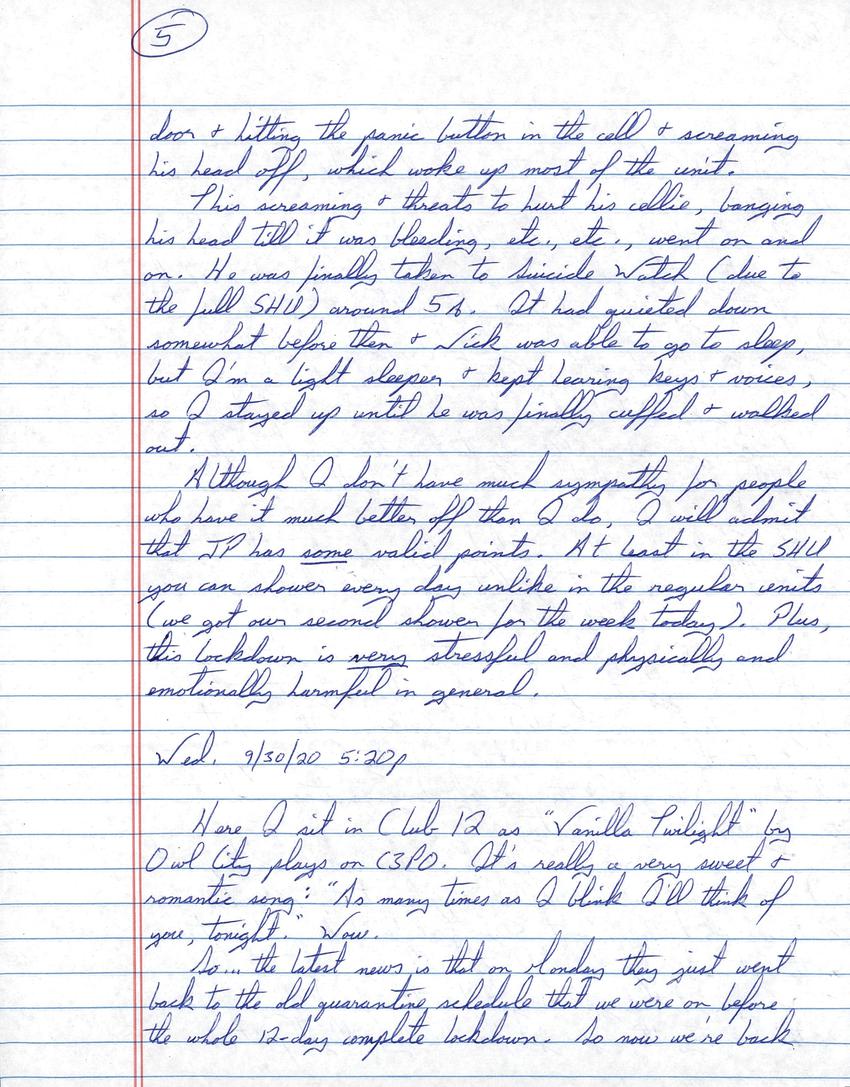 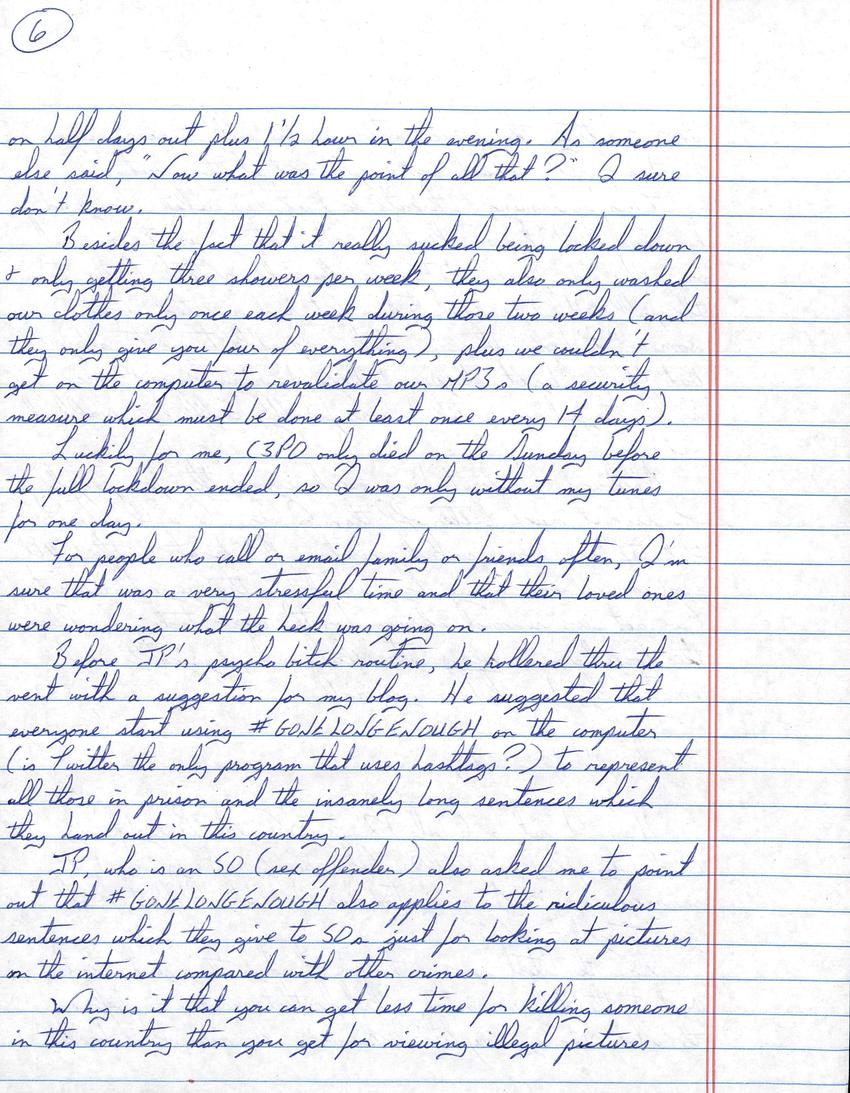 "Rodney found it difficult to believe that anyone from Texas could be gay, what with all that unlimited opportunity to sodomize long-horned cattle."
- Wallace Hamilton, 'Christopher and Gay'

Happy Mabon everyone! Mabon is the second pagan harvest festival, which is on the first day of Autumn.

I'm currently locked in my cell - as I have been since last Wed. - as Lady Gaga sings "Bad Romance" on C3PO.

For reasons to be soon revealed, Iam burning through books. I'm currently reading "Haunted" by James Patterson and James O. Born, which is a book which my cellie Nick recently received from his family. Although I'll admit the stories are OK, I'm not a big fan of James Patterson. His two-page chapters are pretty lame and I highly suspect that his co-authors really did all the writing and he just cut a deal with them to slap his name on the cover for a percentage of the profits 'cause his books sell a lot of copies. Double lame.

So... last Tues. we were out on our latest lockdown/quarantine schedule that I previously mentioned with each tier out separately in either the morning or afternoon and then for 1 1/2 hour each in the evening.

On that day, someone told me that E-North, the "drug program" unit, was locked down due to cases of COVID in that unit, which he said was verified by the CO working that day. Also, I was told that people from the CDC were here checking things out and interviewing people.

The following day, Wed., started out normally - which for here was the typical screwed-up routine. My tier was out for the morning and we had Rec first - at the ungodly hour of 6:55A. Ugh.

As I believe I've previously mentioned, normally when one tier is out of their cells for the morning, the other tier goes out to breakfast and then stays out till lunch.

However... because my tier went to Rec first in the morning, they let us out first to get breakfast. Then, before there was even time to eat, they called us to go to Rec, so your food would be cold before you got back. They would then lock us in our own cells - those of us who chose not to go to Rec - then let out the top tier to go to breakfast, lock them back in their cells, and then let us back out for our free time in the unit. Typical BOP idiocy. For the record, Rec was canceled that day + the previous Monday (plus Commissary) due to a tiny bit of fog.

So, after all this nonsense of being let out, locked in, then let back out, we were out for a half hour to an hour and then told to lock back down. And we have remained locked down since then. We haven't even been let out for 1 1/2 hour three times per week like they started out last April when this whole mess started.

The day after all this, on a Thursday, we were allowed to shower a few cells at a time + then locked back in our cells. Since we were out Mon. and Tues., they considered this our required third shower per week. I took a quick "bird bath" in the sink on Sat.

This past Sun. the hot water went out in the unit. Also that day, I was shocked to see the Warden help our CO pass out our lunch trays / dinner bags in the unit.

On Monday they let us take a quick 5 minute shower again, but they didn't bother to wait till the hot water was fixed first. Fortunately, they started with the top tier who all had to take cold showers or nothing. Even better, they had just fixed the hot water by the time they got to Nick and me. We were very happy about that.

So far there is no word about how long this full lockdown will last. We are on our sixth month of this crap and it is driving everyone batty.

Speaking of batty... there was a lot of drama last night with my old cellie, JP.

Before I get into all that, some background: although I got along well with JP, he's just plain nuts. He has this thing about whining about how tired he is of this compound and then finds some way to go to the Hole (Segregation). When he got out of the Hole previously, he was put in a cell on the top tier and we shared a vent. One time when his tier was out and we were locked down - just prior to this total lockdown - he came to my door and was whining to me about how he wanted to go to the Hole. He gets out in a year or two and has somewhere to go after he's released, so I have no sympathy for his whining. Boo-fuckin'-hoo. Also, I thought to myself, 'Then why the hell did I save three bags of your property (which normally would have been discarded), just so you can check in to the Hole?'

I just found out a few minutes ago that he checked in to the Hole on Monday when we had cold water 'cause he was bitching about that. He was let out after just a couple hours after demanding a shower, etc.

Which brings us to last night.

Wheat I was told by his latest cellie (thru the vent), is that he had been sleeping all day and then would stay up all night with the light on while his cellie was trying to sleep. Very rude and disrespectful.

Sometime around 3A when they came through for one of the nighttime counts, his cellie got tired of it and tuned off the light. JP threw a fit and told the CO that he wanted to go to the Hole. The SHU (Hole) is currently full (when is it not?) and at first he was refused. At one point he started banging his head against the cell door and hitting the panic button in the cell and screaming his head off, which woke up most of the unit.

This screaming and threats to hurt his cellie, banging his head till it was bleeding, etc., etc., went on and on. He was finally taken to Suicide Watch (due to the full SHU) around 5A. It had quieted down somewhat before then and Nick was able to go to sleep, but I'm a light sleeper and kept hearing keys and voices, so I stayed up until he was finally cuffed and walked out.

Although I don't have much sympathy for people who have it much better off than I do, I will admit that JP has some valid point. At least in the SHU you can shower every day unlike in the regular units (we got our second shower for the week today). Plus, this lockdown is very stressful and physically and emotionally harmful in general.

Here I sit in Club 12 as "Vanilla Twilight" by Owl City plays on C3PO. It's really a very sweet and romantic song: "As many times as I blink I'll think of you, tonight." Wow.

So.. the latest news is that on Monday they just went back to the old quarantine schedule that we were on before the whole 12-day complete lockdown. So now we're back on half days out plus 1 1/2 hour in the evening. As someone else said, "Now what was the point of all that?" I sure don't know.

Besides the fact that it really sucked being locked down and only getting three showers per week, they also only washed our clothes only once each week during those two week (and they only give you four of everything), plus we couldn't get on the computer to revalidate our MP3s (a security measure which muse be done at least once every 14 days).

Luckily for me, C3PO only died on the Sunday before the full lockdown ended, so I was only without my tunes for one day.

For people who call or email family or friends often, I'm sure that was a very stressful time and that their loved ones were wondering what the heck was going on.

Before JP's psycho bitch routine, he hollered thru the vent with a suggestion for my blog. He suggested that everyone start using #GONELONGENOUGH on the computer (is Twitter the only program that uses hashtags?) to represent all those in prison and the insanely long sentences which they hand out in this country.

JP, who is an SO (sex offender) also asked me to point out that #GONELONGENOUGH also appplies to the ridiculous sentences which they give to SOs just for looking at pictures on the internet compared with other crimes.

Why is it that you can get less time for killing someone in this country than you get for viewing illegal pictures online? How does that make any sense?

If someone commits a crime, then they should be sent to prison. However, prison sentences should take into account the actual harm caused to the community. How could anyone say that when one person kills another person (or sells drugs to people), they cause less harm to the community - and therefore deserves less time in prison - than someone looking at illegal pictures in their home?

Please consider using #GONELONGENOUGH to draw attention to the lengthy and unfair sentences in this country.