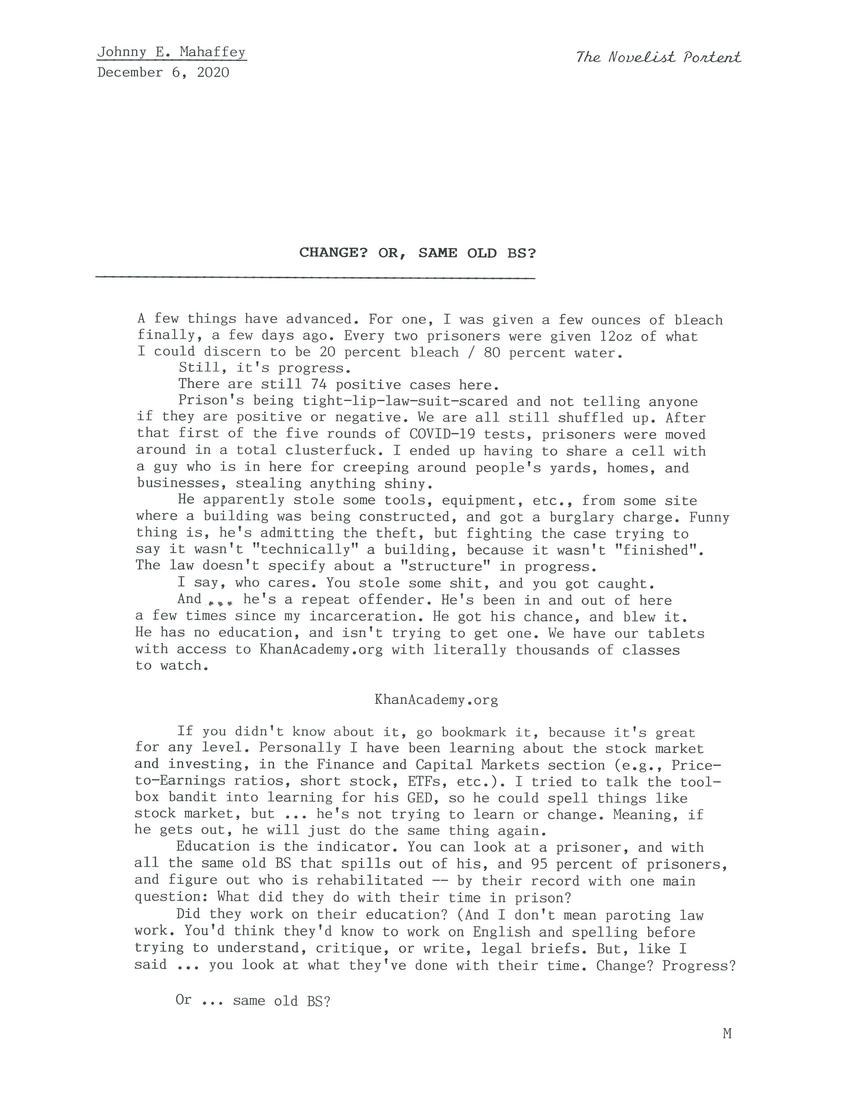 A few things have advanced. For one, I was given a few ounces of bleach finally, a few days ago. Every two prisoners were given 12oz of what I could discern to be 20 percent bleach / 80 percent water.
Still, it's progress.
There are still 74 positive cases here.
Prison's being tight-lip-law-suit-scared and not telling anyone if they are positive or negative. We are all still shuffled up. After that first of the five rounds of COVID-19 tests, prisoners were moved around in a total clusterfuck. I ended up having to share a cell with a guy who is in here for creeping around people's yards, homes, and businesses, stealing anything shiny.
He apparently stole some tools, equipment, etc., from some site where a building was being constructed, and got a burglary charge. Funny thing is, he's admitting the theft, but fighting the case trying to say it wasn't "technically" a building, because it wasn't "finished". The law doesn't specify about a "structure" in progress.
I say, who cares. You stole some shit, and you got caught.
And he's a repeat offender. He's been in and out of here a few times since my incarceration. He got his chance, and blew it. He has no education, and isn't trying to get one. We have our tablets with access to KhanAcademy.org with literally thousands of classes to watch.

If you didn't know about it, go bookmark it, because it's great for any level. Personally I have been learning about the stock market and investing, in the Finance and Capital Markets section (e.g., Price to-Earnings ratios, short stock, ETFs, etc.). I tried to talk the tool box bandit into learning for his GED, so he could spell things like stock market, but ... he's not trying to learn or change. Meaning, if he gets out, he will just do the same thing again.
Education is the indicator. You can look at a prisoner, and with all the same old BS that spills out of his, and 95 percent of prisoners, and figure out who is rehabilitated -- by their record with one main question: What did they do with their time in prison?
Did they work on their education? (And I don't mean paroting law work. You'd think they'd know to work on English and spelling before trying to understand, critique, or write, legal briefs. But, like I said ... you look at what they've done with their time. Change? Progress?
Or ... same old BS?