FCC Petersburg Return to Phase One 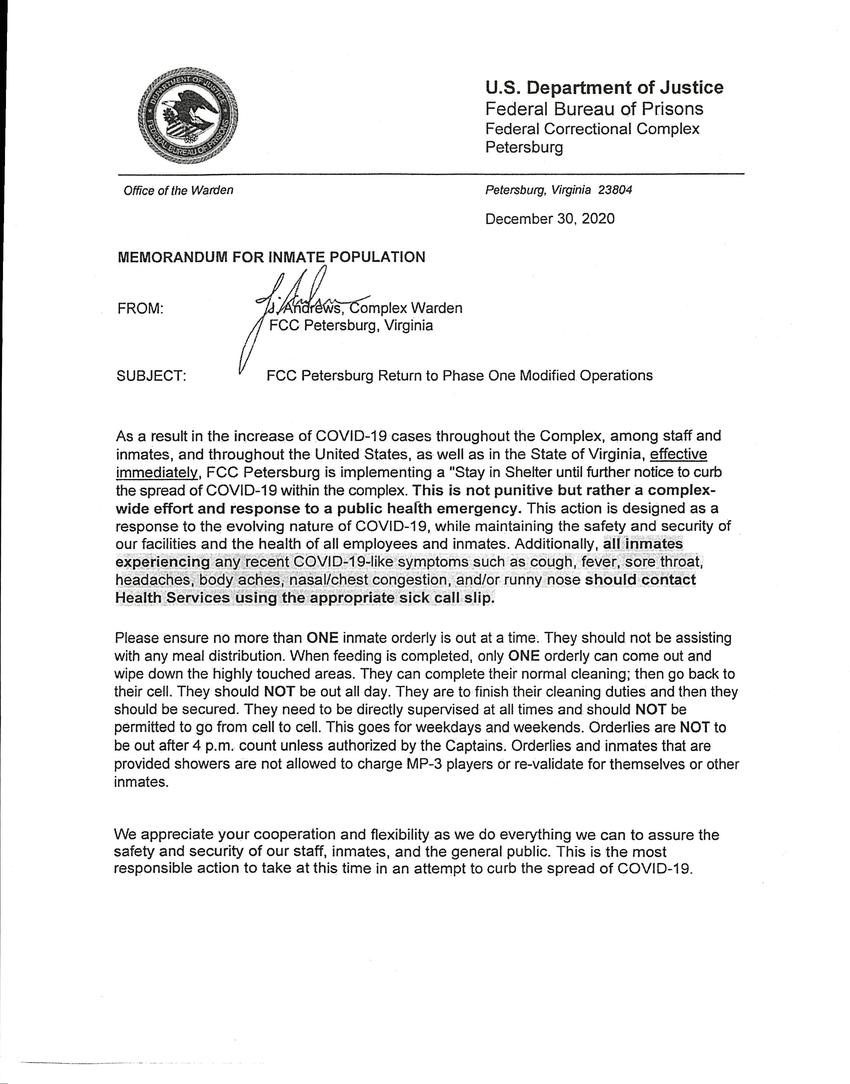 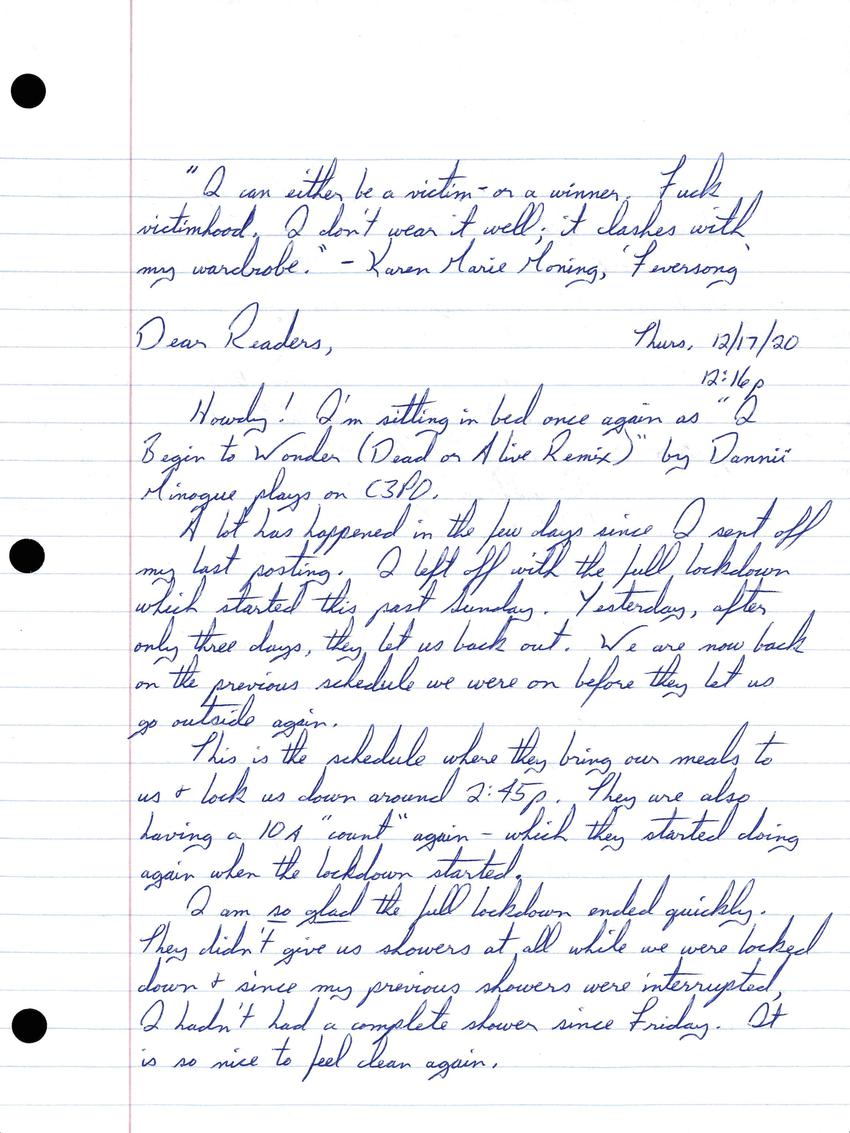 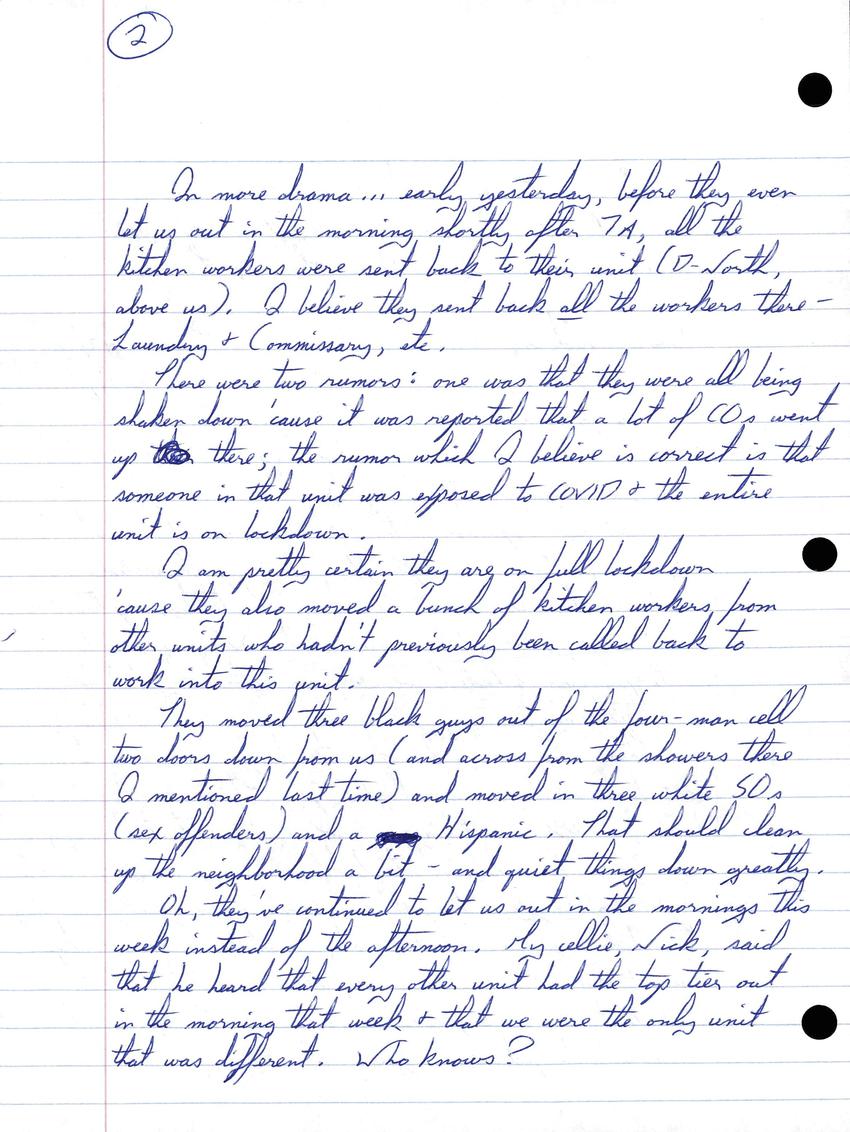 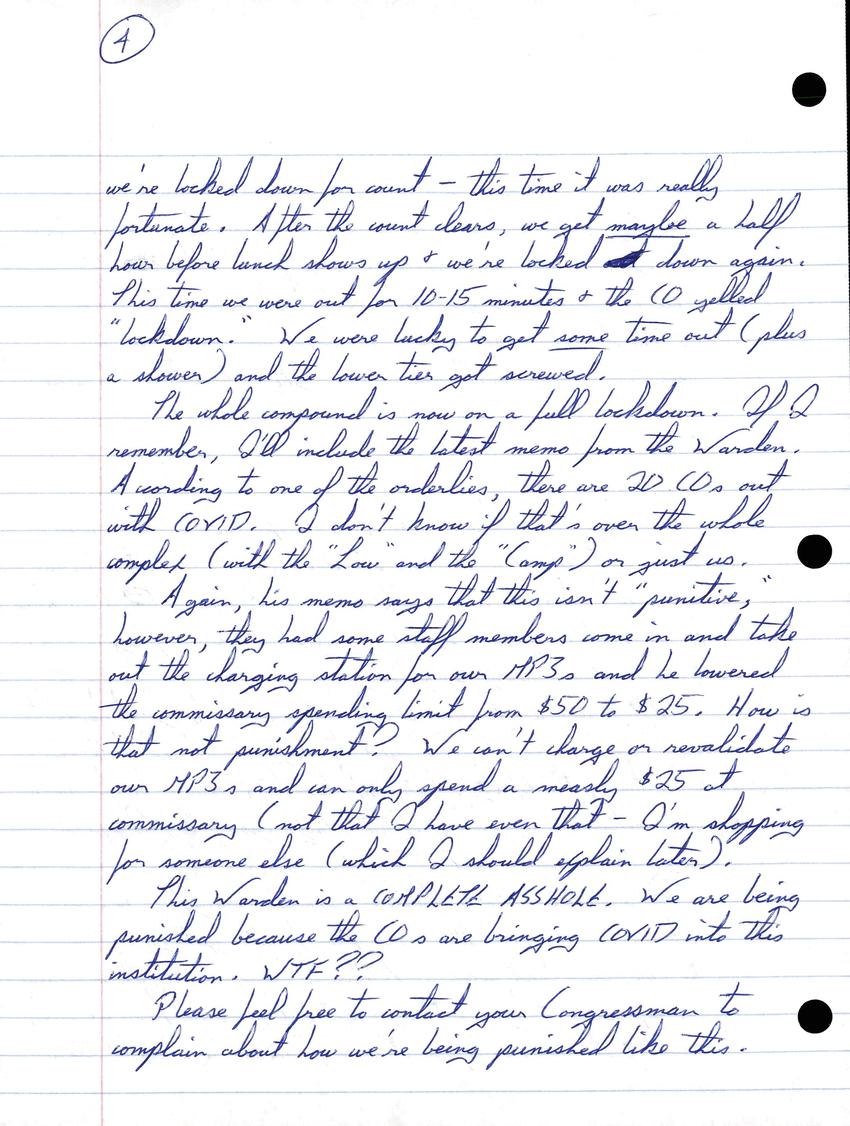 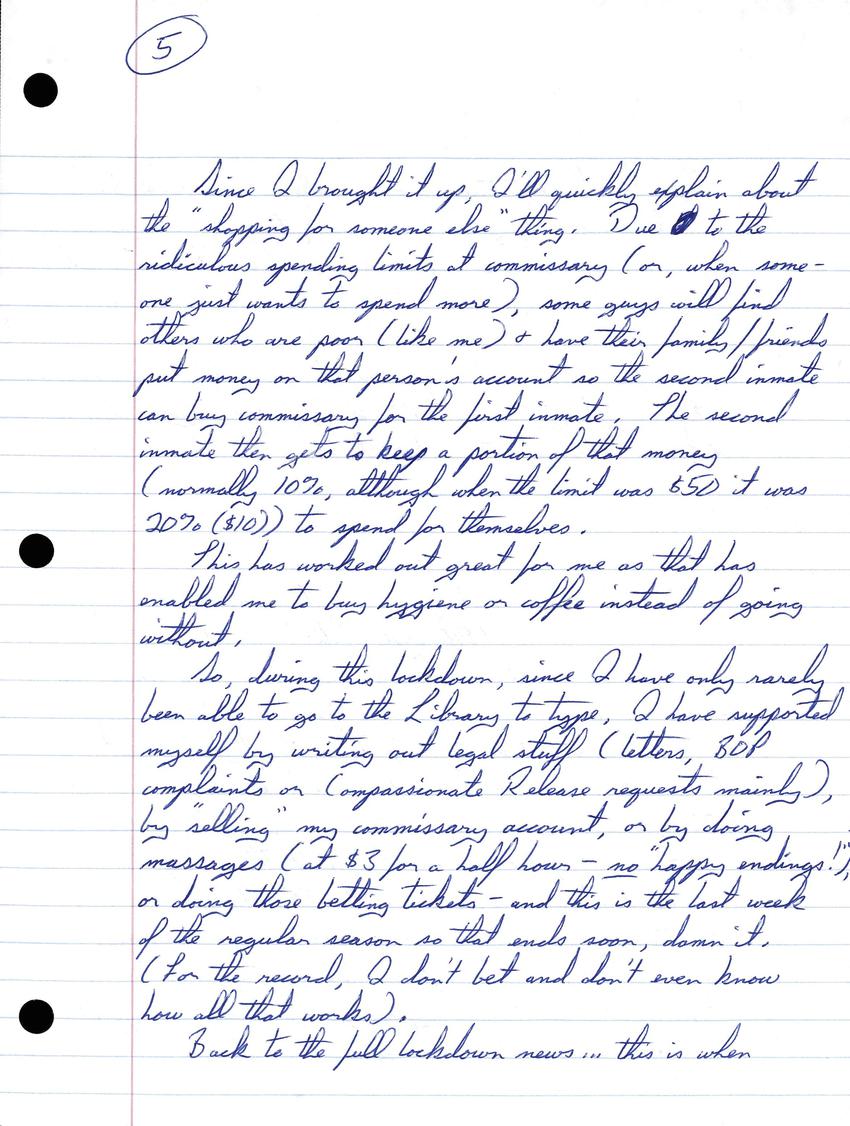 "I can either be a victim - or a winner. Fuck victimhood. I don't wear it well; it clashes with my wardrobe." - Karen Marie Moning, 'Feversong'

Dear Readers,
Howdy! I'm sitting in bed once again as "I Begin to Wonder (Dead or Alive Remix)" by Dannii Minogue plays on C3PO.
A lot has happened in the few days since I sent off my last posting. I left off with the full lockdown which started this past Sunday. Yesterday, after only three days, they let us back out. We are now back on the previous schedule we were on before they let us go outside again.
This is the schedule where they bring our meals to us + lock us down around 2:45p. They are also having a 10A "count" again -- which they started doing again when the lockdown started.
I am so glad the full lockdown ended quickly. They didn't give us showers at all while we were locked down + since my previous showers were interrupted, I hadn't had a complete shower since Friday. It is so nice to feel clean again.
In more drama... early yesterday, before they even let us out in the morning shortly after 7A, all the kitchen workers were sent back to their unit (D-North, above us). I believe they sent back all the workers there -- Laundry + Commissionary, etc.
There were two rumors: one was that they were all being shaken down 'cause it was reported that a lot of COs went up there; the rumor which I believe is correct is that someone in that unit was exposed to COVID + the entire unit is on lockdown.
I am pretty certain they are on full lockdown 'cause they also moved a bunch of kitchen workers from other units who hadn't previously been called back to work into this unit.
They moved three black guys out of the four-man cell two doors down from us (and across from the showers there I mentioned last time) and moved in three white SOs (sex offenders) and a Hispanic. That should clean up the neighborhood a bit -- and quiet things down greatly.
Oh, they've continued to let us out in the mornings this week instead of the afternoon. My cellie, Nick, said that he heard that every other unit had the top tier out in the morning that week + that we were the only unit that was different. Who knows?
One of the guys who was moved to this unit is Johnny, with whom I lived in B-South right after I got to this prison. He also happens to be the person who was saying that KP died from an OD, as I mentioned last time. He also "claims" that he is allergic to red fruit only. I highly doubt that's true.

Happy New Year! What an awful year 2020 was! So far, (well, it's only been one day), 2021 is not starting out well. For the record, "Jesus Was A B-Boy (TJ Kong & Nuno Dos Santos Remix)" by Ben Mono is playing on C3PO. It's a really funny song.
It's been a while since I last wrote. I just haven't been "feeling it." I managed to stay out of the Hole this Christmas, thankfully, but unfortunately we are back on a full lockdown again as of two days ago. So, I spent my New Year's locked in a cell again.
This past week started normally enough. We were out in the morning this time after finally getting out in the afternoon last week. Although being out in the morning really sucks -- by the time we get out for breakfest we only have about an hour before it's my "shower time" and then we're locked down for count -- this time it was really fortunate. After the count clears, we get maybe a half hour before lunch shows up + we're locked down again. This time we were out for 10-15 minutes + the CO yelled "lockdown." We were lucky to get some time out (plus a shower) and the lower tier got screwed.
The whole compound is now on full lockdown. If I remember, I'll include the latest memo from the Warden. According to one of the orderlies, there are 20 COs out with COVID. I don't know if that's over the whole complex (with the "Low" and the "Camp") or just us.
Again, his memo says that this isn't "punitive," however, they had some staff members come in and take out the changing station for our MP3s and he lowered the commissary spending limit from $50 to $25. How is that not punishment? We can't change or revalidate our MP3s and can only spend a measly $25 at commissary (not that I have even that -- I'm shopping for someone else (which I should explain later).
This Warden is a COMPLETE ASSHOLE. We are being punished because the COs are bringing COVID into the institution. WTF??
Please feel free to contact your Congressman to complain about how we're being punished like this.
Since I brought it up, I'll quickly explain about the "shopping for someone else" thing. Due to the ridiculous spending limits at commissary (or, when some-one just wants to spend more), some guys will find others who are poor (like me) + have their family/friends put money on that person's account so the second inmate can buy commissary for the first inmate. The second inmate then gets to keep a portion of that money (normally 10%, although when the limit was $50 it was 20% ($10)) to spend for themselves.
This has worked our great for me as that has enabled me to buy hygiene or coffee instead of going without.
So, during the lockdown, since I have only rarely been able to go to the Library to type, I have supported myself by writing out legal stuff (letters, BOP complaints on Compassionate Release requests mainly), by "selling" my commissary account, or by doing massages (at $3 for a half hour -- no "happy endings!"), or doing those betting tickets -- and this is the last week of the regular season so that ends soon, damn it. (For the record, I don't bet and don't even know how all that works).
Back to the full lockdown news... this is when we're let out only three times a week to shower + that's it. Because today was a holiday, they let us out yesterday to shower. This means we won't get another shower until Monday at the earliest. This shit really sucks. Once again, we have no idea how long this will last, but I am fairly certain it will be a bit longer than that last very short lockdown.

Here I am in bed again (still) as "With Every Beat Of My Heart (Extended Radio Remix)" by Taylor Dayne plays on C3PO. I only have five more days that I can play by MP3 before it stops playing since I can't revalidate it on the computer. Fucking bullshit. I havem't been using it much so I still have 80% of battery life left.
Fortunately, Nick bought one of their cheap-ass windup radios so we can watch TV. He lets me use it when there's nothing he wants to watch. Those radios are garbage + they have lots of problems. They're a model Sangean MMR-77 and they charge us about $62 for them. They're a total rip-off