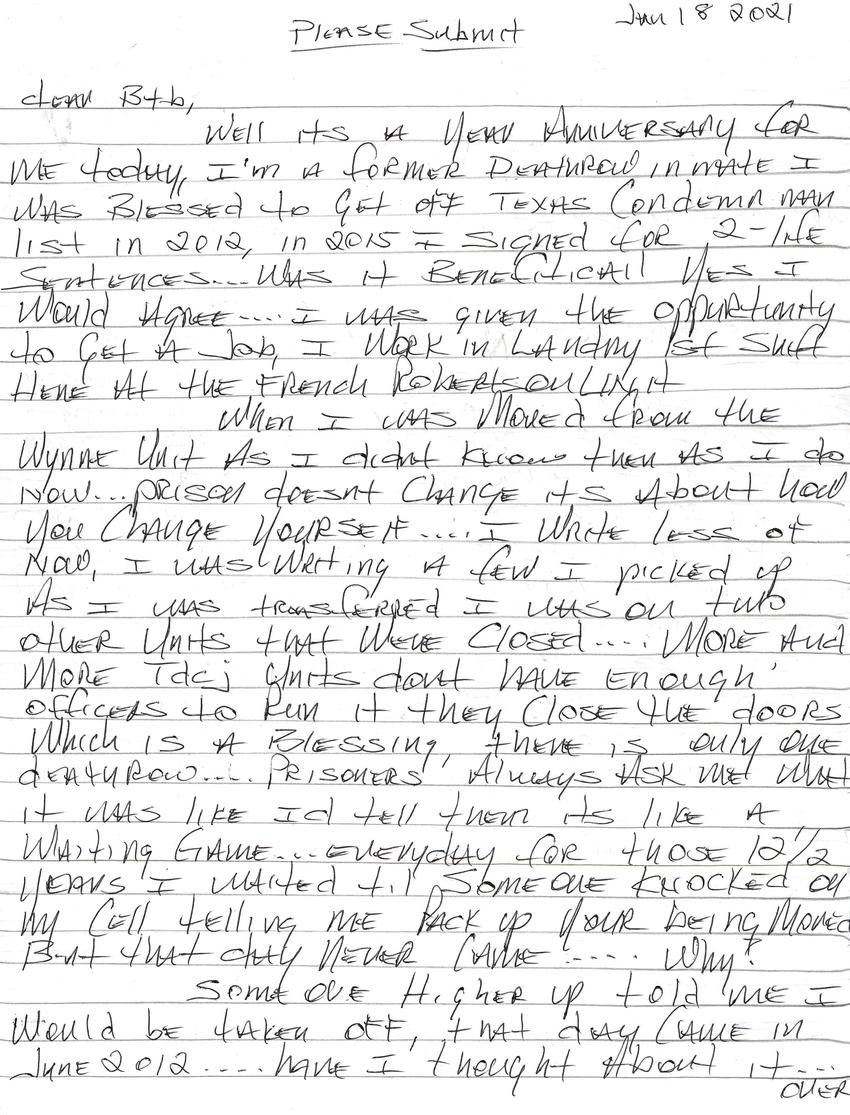 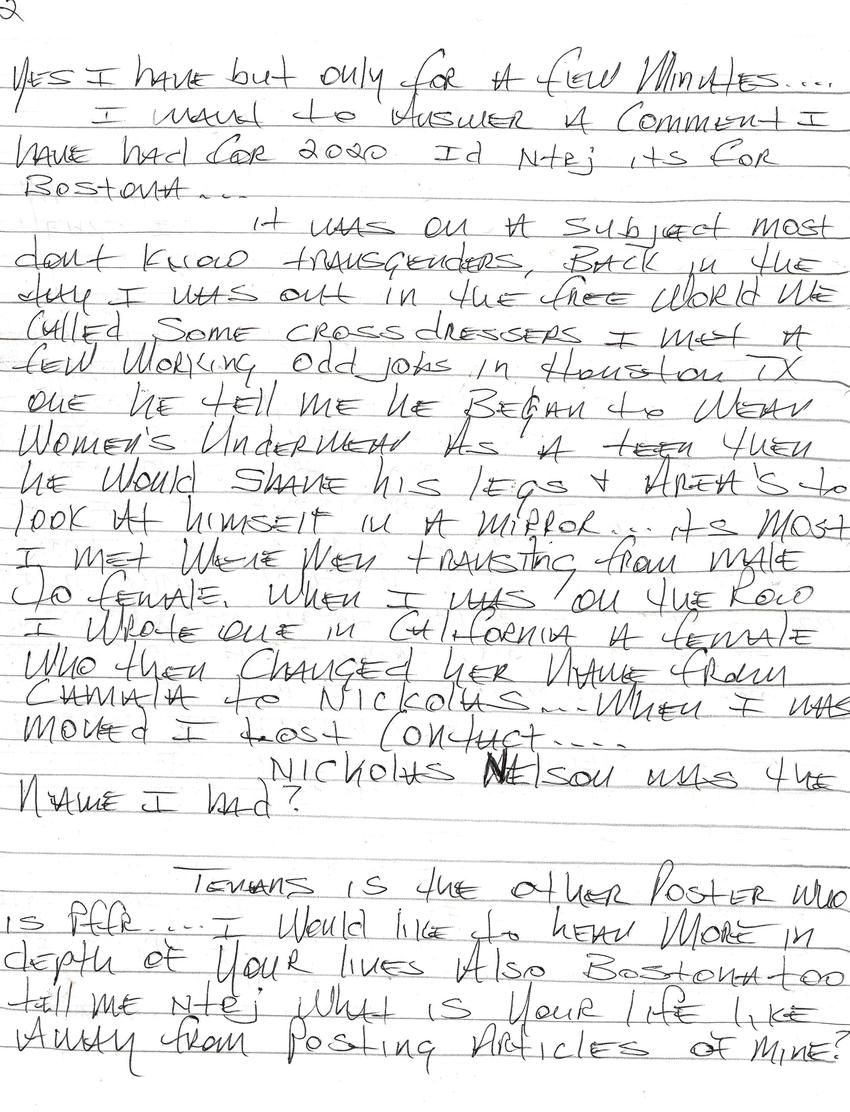 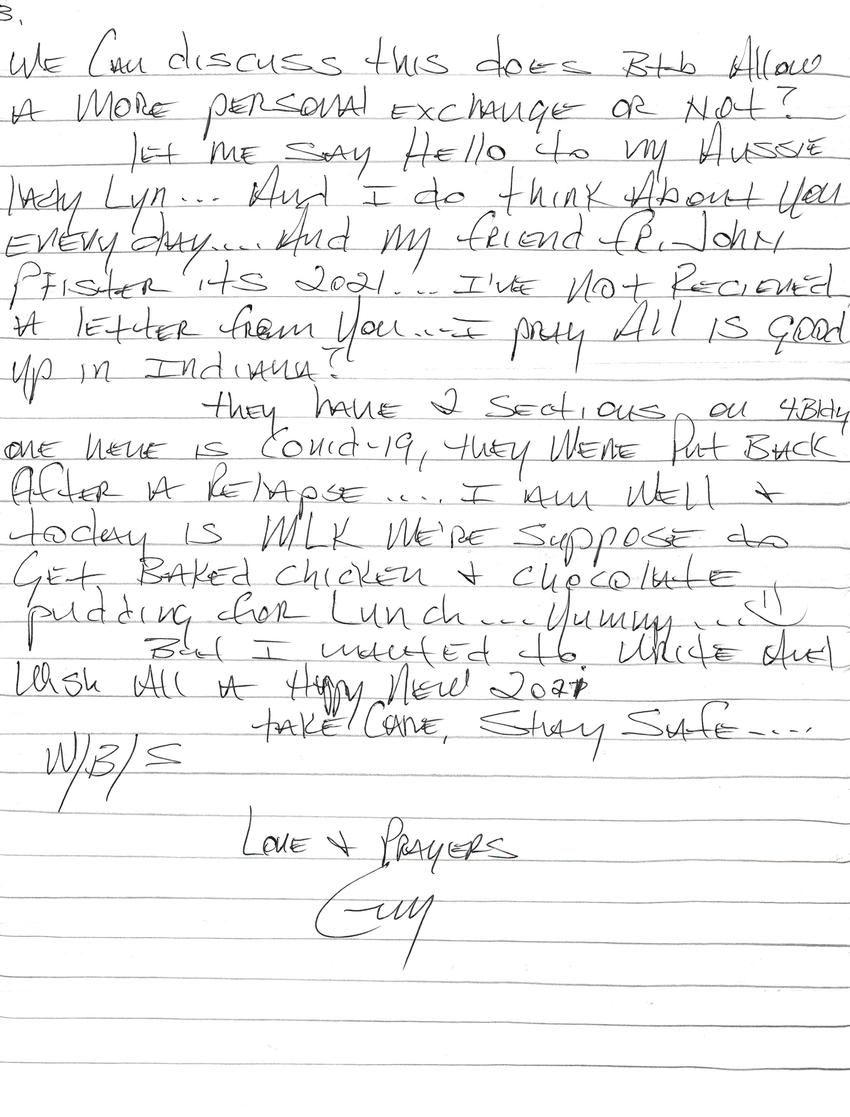 Dear B+b,
Well its a year anniversary for me today, I'm a former death row inmate I was blessed to get off Texas Condemn list in 2012, in 2015 I signed for 2-life sentences...was it beneficial yes I would agree... I was given the opportunity to get a job, I work in laundry staff here at the French Roberts out.

When I was moved from the Wynne Unit as I didn't know then as I do now... prison doesn't change its about you. You change yourself... I unite less of now, I was werting a few I picked up. As I was transferred I was out two other units that were closed... More Aud officers more Tdcj units don't have enough offiverd to run ifthey close the doors. Which is a blessing, there is only euly due desthrow. Prisoners Always Ask me what it was like Id tell them its like a waiting game... Everyday for those 12.5 years I waited til someone knocked on my cell telling me pack up your being moved. But that day never came... Why?
Some one Higher up told me I would be taken off, that day came in June 2012, have I thought about it... over... yes I have but only for a few minutes...
I want to answer a comment I have for 2020 Id ntrj its for Bostona...
It was a subject most don't know transgenders, back in the day I was out I the free world we called some crossdressers I met a few working odd jobs in Houston TX due he tell me he began to wear women's underwear as a teen then he would shave his legs and area's to look at himself in a mirror... Its most I met were when transitioning from male to female, when I was on the row I wrote due in California a female who changed her name from Camalia to Nickolus... When I was moved I lost contact... Nickolous Nelsou was the name I had?
Trns if the only other poster who is pffr... I would like to heau more in depth of your lives Also Bostona too tell me Ntej what is your life like away from posting articles of mine?
We can discuss this does Btab allow a more personal exchange or not?
Let me say Hello to my Aussie lady Lyn... And I do think about you everyday... And my friend fr. John Pister its 2021... I've not received a letter from you... I pray all is good up in Indiana?
They have 2 sections ou 4Bldy one name is Couidula, they were put back after a relapse... I am well and today is MLK we're suppose to get baked chicken and chocolate pudding for Lunch... Yummy... :)
But I wanted to write and wish all a happy new year 2021.
Take care, stay safe...
W/B/S
Love & Prayers
Guy