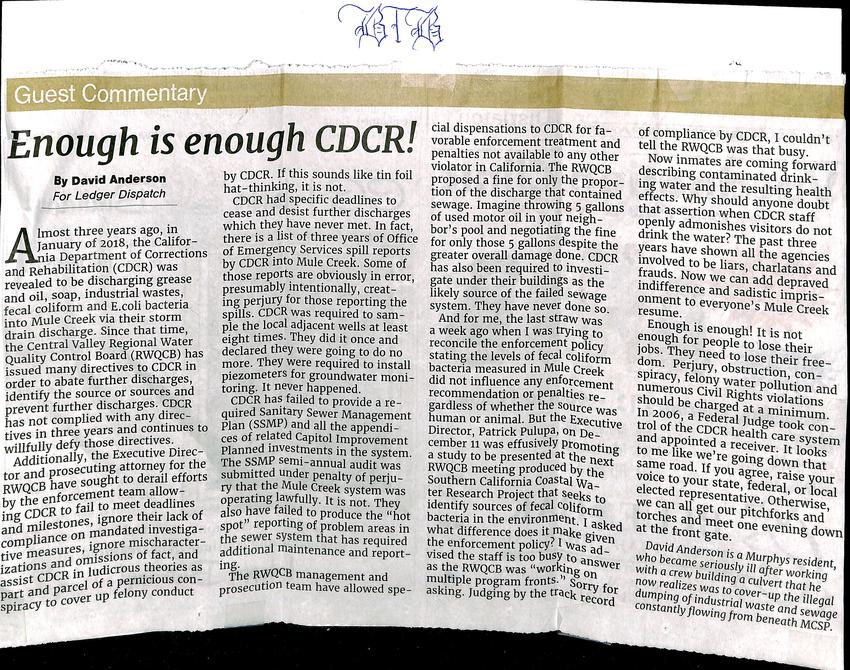 Enough is enough CDCR!
By David Anderson
For Ledger Dispatch

Almost three years ago, in January of 2018, the California Department of Corrections and Rehabilitation (CDCR) was revealed to be discharging grease and oil, soap, industrial wastes, fecal coliform and E.coli bacteria into Mule Creek via their storm drain discharge. Since that time, the Central Valley Regional Water Quality Control Board (RWQCB) has issued many directives to CDCR in order to abate further discharges, identify the source or sources and prevent further discharges. CDCR has not complied with any directives in three years and continues to willfully defy those directives.

Additionally, the Executive Director and prosecuting attorney for the RWQCB have sought to derail efforts by the enforcement team allowing CDCR to fail to meet deadlines and milestones, ignore their lack of compliance on mandated investigative measures, ignore mischaracterizations and omissions of fact, and assist CDCR in ludicrous theories as part and parcel of a pernicious conspiracy to cover up felony conduct by CDCR. If this sounds like tin foil hat-thinking, it is not.

CDCR had specific deadlines to cease and desist further discharges which they have never met. In fact, there is a list of three years of Office of Emergency Services spill reports by CDCR into Mule Creek. Some of those reports are obviously in error, presumably intentionally, creating perjury for those reporting the spills. CDCR was required to sample the local adjacent wells at least eight times. They did it once and declared they were going to do no more. They were required to install piezometers for groundwater monitoring. It never happened.

CDCR has failed to provide a required Sanitary Sewer Management Plan (SSMP) and all the appendices of related Capitol Improvement Planned investments in the system. The SSMP semi-annual audit was submitted under penalty of perjury that the Mule Creek system was operating lawfully. It is not. They also have failed to produce the "hot spot" reporting of problem areas in the sewer system that has required additional maintenance and reporting.

The RWQCB management and prosecution team have allowed special dispensations to CDCR for favorable enforcement treatment and other penalties not available to any other violator in California. The RWQCB proposed a fine for only the proportion of the discharge that contained sewage. Imagine throwing 5 gallons of used motor oil in your neighbor's pool and negotiating the fine for only those 5 gallons despite the greater overall damage done. CDCR has also been required to investigate under their buildings as the likely source of the failed sewage system. They have never done so.

And for me, the last straw was a week ago when I was trying to reconcile the enforcement policy stating the levels of fecal coliform bacteria measured in Mule Creek did not influence any enforcement recommendation or penalties regardless of whether the source was human or animal. But the Executive Director, Patrick Pulupa, on December 11 was effusively promoting a study to be presented at the next RWQCB meeting produced by the Southern California Coastal Water Research Project that seeks to identify sources of fecal coliform bacteria in the environment. I asked what difference does it make given the enforcement policy? I was advised the staff is too busy to answer as the RWQCB was "working on multiple program fronts." Sorry for asking. Judging by the track record of compliance by CDCR, I couldn't tell the RWQCB was that busy.

Now inmates are coming forward describing contaminated drinking water and the resulting health effects. Why should anyone doubt that assertion when CDCR staff openly admonishes visitors do not drink the water? The past three years have shown all the agencies involved to be liars, charlatans and frauds. Now we can add depraved indifference and sadistic imprisonment to everyone's Mule Creek resume.

Enough is enough! It is not enough for people to lose their jobs. They need to lose their freedom. Perjury, obstruction, conspiracy, felony water pollution and numerous Civil Rights violations should be charged at a minimum. In 2006, a Federal Judge took control of the CDCR health care system and appointed a receiver. It looks to me like we're going down that same road. If you agree, raise your voice to your state, federal, or local elected representative. Otherwise, we can all get our pitchforks and torches and meet one evening down at the front gate.

David Anderson is a Murphys resident, who became seriously ill after working with a crew building a culvert that he now realizes was to cover-up the illegal dumping of industrial waste and sewage constantly flowing from beneath MCSP.