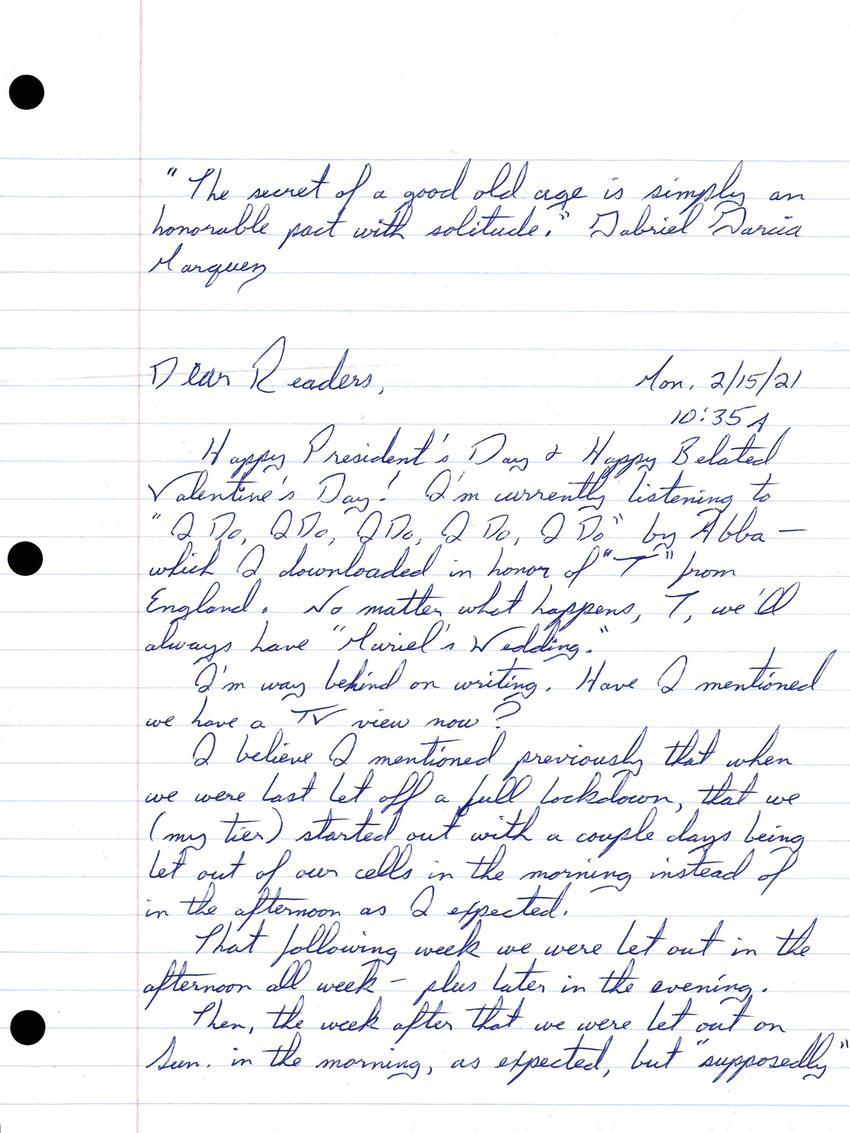 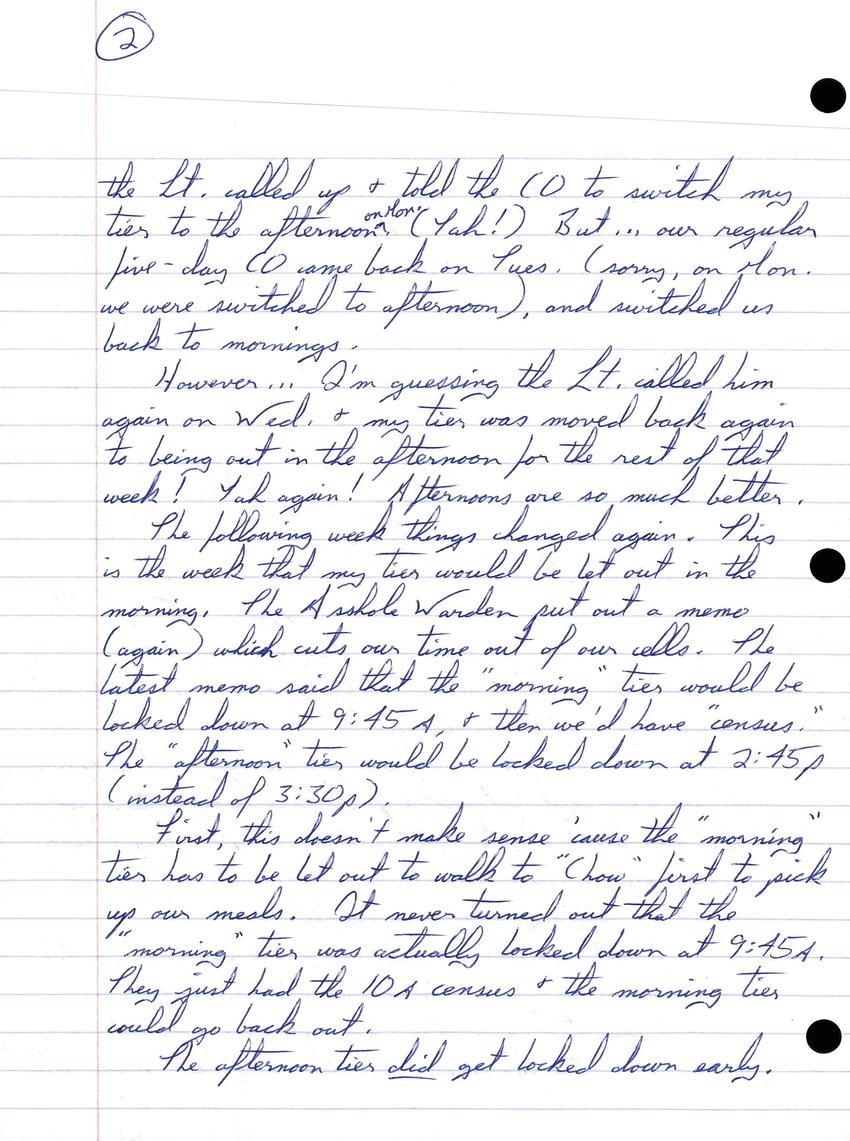 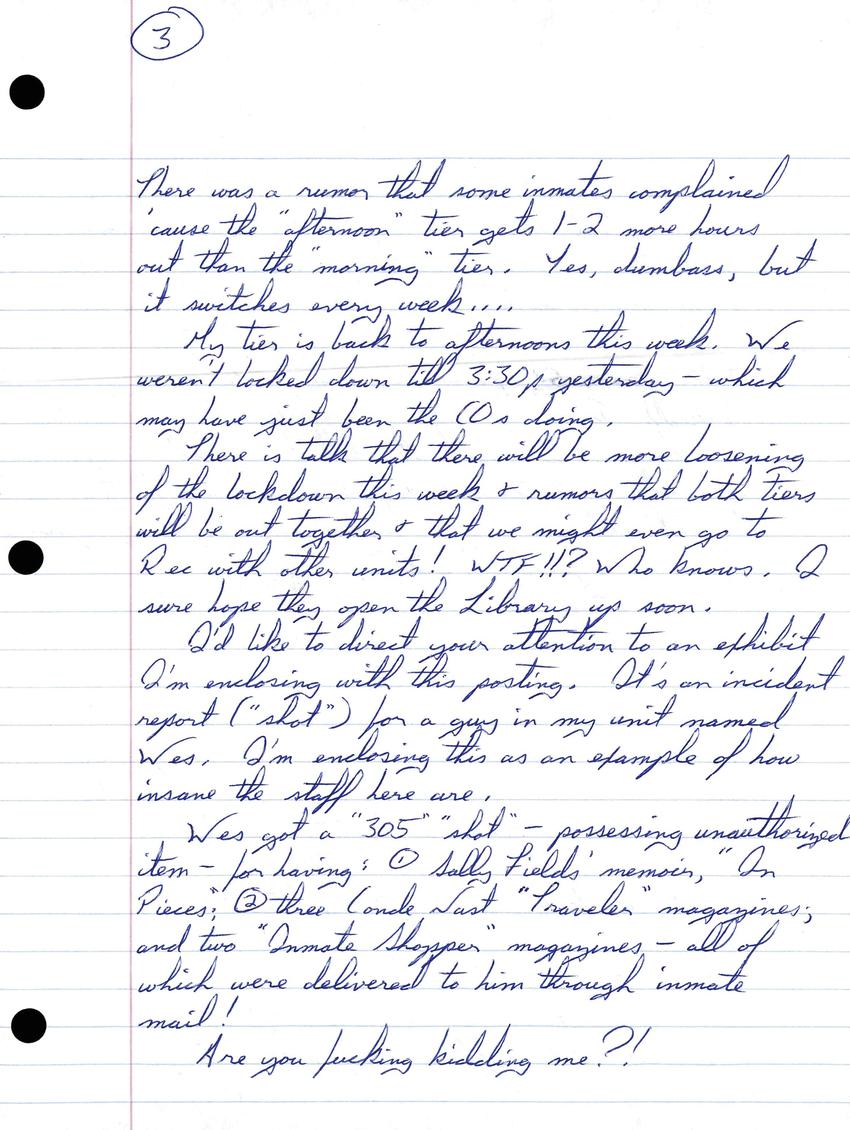 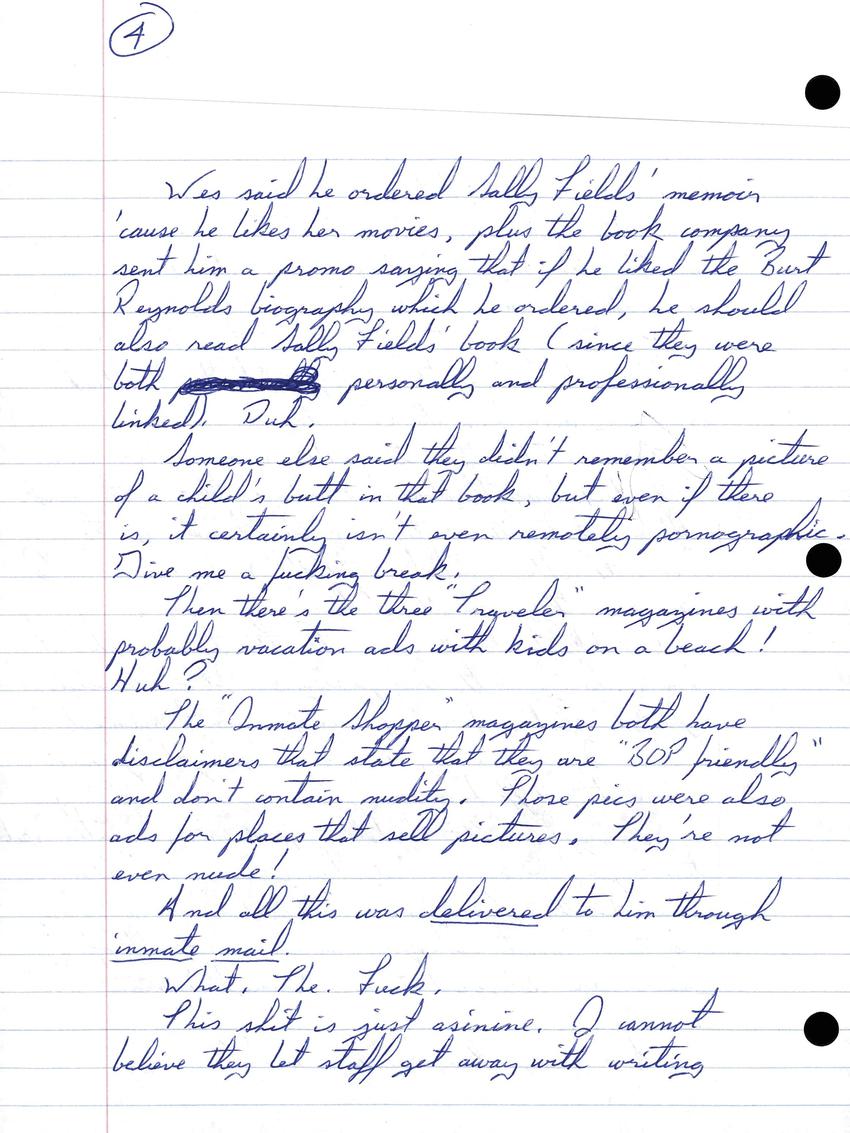 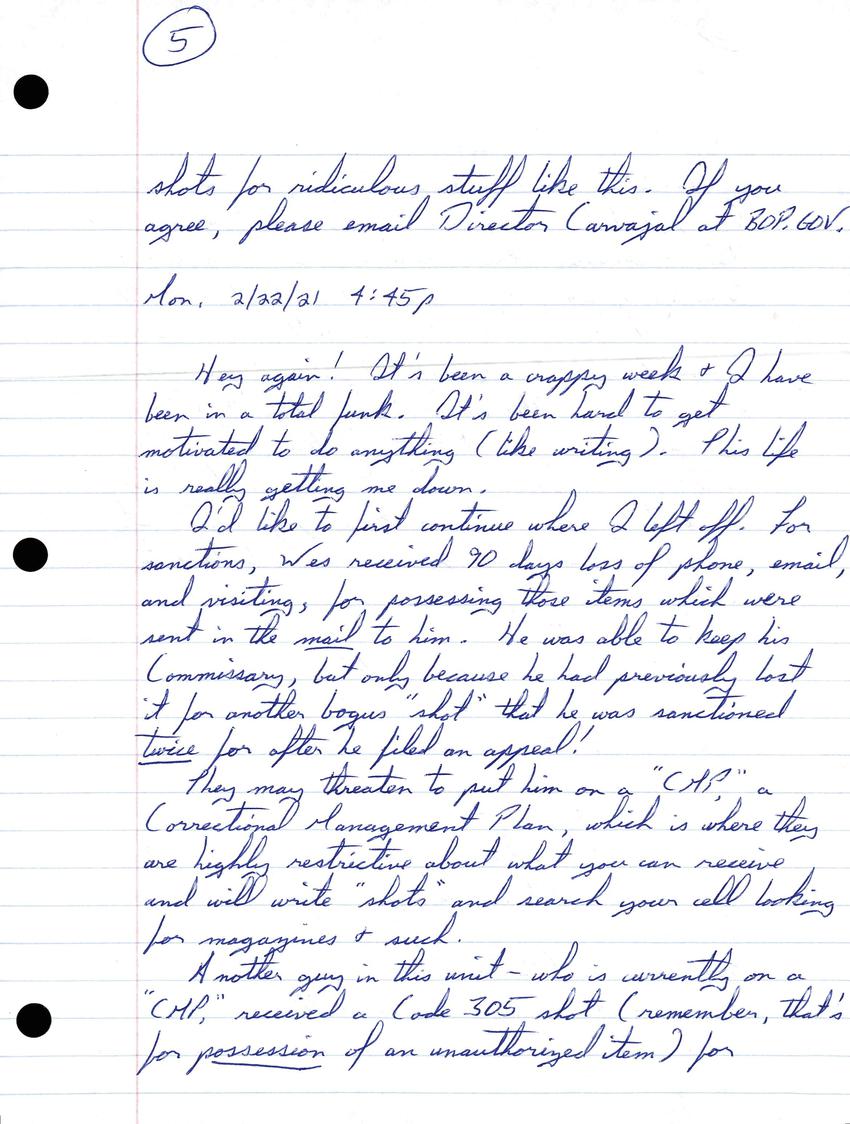 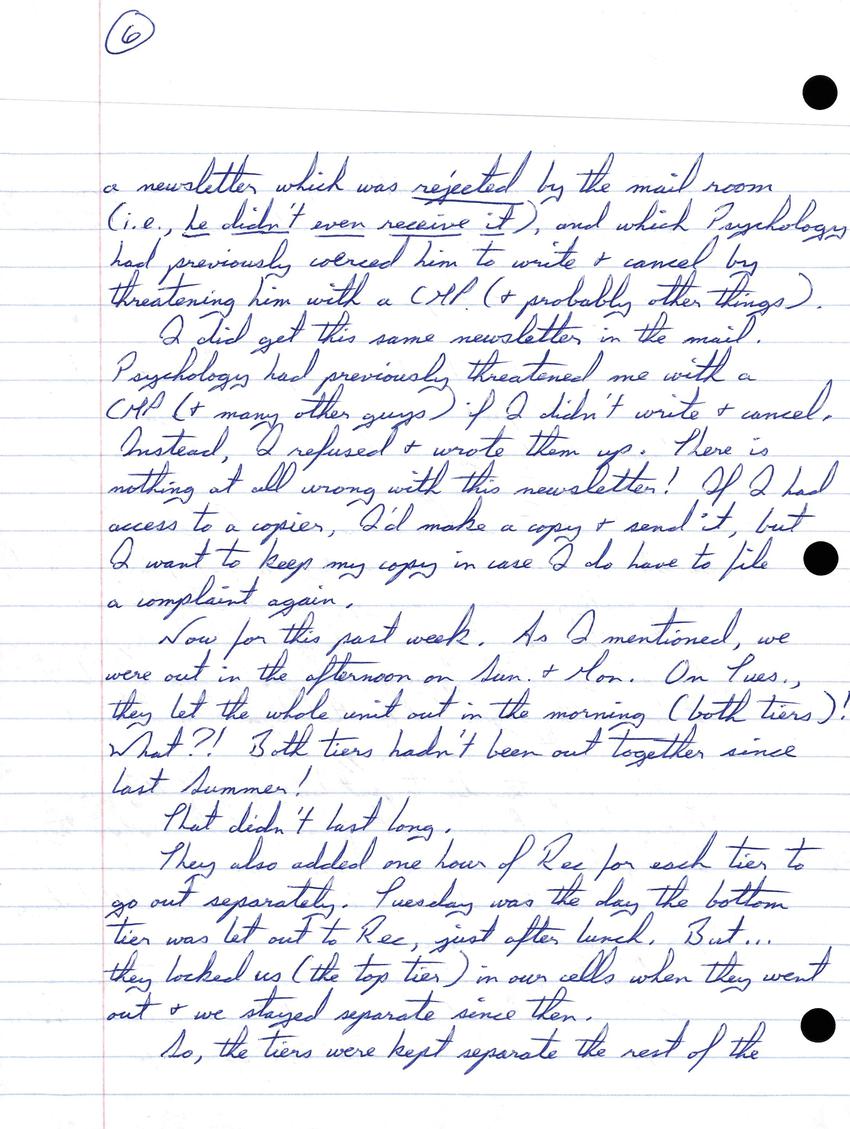 "The secret of a good old age is simply an honorable past with solitude." Gabriel Garcia Mariquez

Happy President's Day & Happy belated Valentine's day! I'm currently listening to "I Do, I Do, I Do, I Do, I Do" by Abba - which I downloaded in honor of "T" from England. No matter what happens, T, we'll always have "Muriel's Wedding."
I'm way behind on writing. Have I mentioned we have a TV view now?
I believe I mentioned previously that when we were last let off a full lockdown, that we (my tier) started out with a couple days being let out of our cells in the morning instead of in the afternoon as I expected.
That following week we were let out in the afternoon all week - plus later in the evening.
Then, the week after that we were let out on Sun. in the morning, as expected, but "supposedly" the Lt. called up & told the CO to switch my tier to the afternoon on Mon. (Fah!) But... our regular five-day CO came back on Tues. (sorry, on Mon. we were switched to afternoon), and switched us back to mornings.
However... I'm guessing the Lt. called him again on Wed. & my tier was moved back again to being out in the afternoon for the rest of that week! Yak again! Afternoons are so much better.
The following week things changed again. This is the week that my tier would be let out in the morning. The Asshole warden put out a memo (again) which cuts our time out of our cells. The latest memo said that the "morning" tier would be locked down at 9:45A, & then we'd have "census". The "afternoon" tier would be locked down at 2:45p (instead of 3:30p).
First, this doesn't make sense 'cause the "morning" tier has to be let out to walk to "chow" first to pick up our meals. It never turned out that the "morning" tier was actually locked down at 9:45A. They just had the 10A census & the morning tier could go back out.
The afternoon tier did get locked down early. There was a rumor that some inmates complained 'cause the "afternoon" tier gets 1-2 more hours out than the "morning" tier. Yes, dumbass, but it switches every week...
My tier is back to afternoons this week. We weren't locked down till 3:30p yesterday - which may have just been the CO's doing.
There is talk that there will be more loosening of the lockdown this week & rumors that both tiers will be out together 7 that we might even go to Ree with other units! WTF!!? Who knows. I sure hope they open the library up soon.
I'd like to direct your attention to an exhibit I'm enclosing with this posting. It's an incident report ("shot") for a guy in my unit named Wes. I'm enclosing this as an example of how insane the staff here are.
Wes got a "305" "shot" - possessing unauthorized item - for having: (1) Sally Field's memoir, "In Pieces;" (2) three Conde Nast "Traveler" magazines; and two "Inmate Shopper" magazines - all of which were delivered to him through inmate mail!
Are you fucking kidding me?!
Wes said he ordered Sally Field's memoir 'cause he likes her movies, plus the book company sent him a promo saying that if he liked the Burt Reynolds biography which he ordered, he should also read Sally Field's book (since they were both personally and professionally linked). Duh.
Someone else said they didn't remember a picture of a child's butt in that book, but even if there is it certainly isn't even remotely pornographic. Give me a fucking break.
Then there's the three "Traveler" magazines with probably vacation ads with kids on a beach! Huh?
The "Inmate Shopper" magazines both have disclaimers that state that they are "BOP friendly" and don't contain nudity. Those pics were also ads for places that sell pictures. They're not even nude!
And all this was delivered to him through inmate mail.
What. The. Fuck.
This shit is just asinine. I cannot believe they let staff get away with writing shots for ridiculous stuff like this. If you agree, please email Director Carvajal at BOP.GOV.

Hey again! It's been a crappy week & I have been in a total funk. It's been hard to get motivated to do anything (like writing). This life is really getting me down.
I'd like to first continue where I left off. For sanctions, Wes received 90 days loss of phone, email, and visiting, for possessing those items which were sent in the mail to him. He was able to keep his Commissary, but only because he had previously lost it for another bogus "shot" that he was sanctioned twice for after he filed an appeal!
They may threaten to put him on a "CMP," a Correctional Management Plan, which is where they are highly restrictive about what you can receive and will write "shots" and search your cell looking for magazines & such.
Another guy in this unit - who is currently on a "CMP," received a Code 305 shot (remember, that's for possession of an unauthorized item) for a newsletter which was rejected by the mailroom (i.e., he didn't even receive it), and which Physiology had previously coerced him to write & cancel by threatening him with a CMP. (& probably other things).
I did get this same newsletter in the mail. Psychology had previously threatened me with a CMP (& many other guys). If I didn't write & cancel. Instead, I refused & wrote them up. There is nothing at all wrong with this newsletter! If I had access to a copier, I'd make a copy & send it, but I want to keep my copy in case I do have to file a complaint again.
Now for this past week. As I mentioned, we were out in the afternoon on Sun. & Mon. On Tues., they let the whole unit out in the morning (both tiers)! What?! Both tiers hadn't been out together since last summer!
That didn't last long.
They also added one hour of Rec for each tier to go out separately. Tuesday was the day the bottom tier was let out to Rec, just after lunch. But... they locked us (the top tier) in our cells when they went out & we stayed separate since then.
So, the tiers were kept separate the rest of the week AND they switched the top tier back to the morning shift for the rest of the week. Great.
To make things even worse, there was a water problem in the local water supply (Hopewell, VA) & we weren't allowed to take showers from Sun. until Thurs. There was a rumor that our tier was the only one locked down on Tues. 'cause guys were taking showers when they weren't supposed to. Plus, we got box meals all week. Gag. I'm also including a memo - full of misspelled words - about the water problem & how we couldn't even flush our toilets.
But wait, it gets even better. We previously had unlimited flushes on our toilet. However, these assholes went around & reset every toilet so that if you flush twice within 5 minutes, it'll lock you out for an hour.
What the fuck is the purpose of this?!
I have seen guys flood a range in the SHU (Hole/Segregation) by blocking up their toilet & flushing constantly, but NEVER in general population. There's no reason to in gen. pop.!
Imagine how bad a cell smells after you are forced to sit over your filth for 5 minutes because you can't flush - or you'll have to suffer for an hour. That may not seem like long, but try timing it the next time you use the bathroom.
While I was writing this, someone brought me a rejection notice from the mali room 'cause they said you could no longer receive mass mailings of religious materials!
This shit is insane! That is another first amendment violation by this place! These people are out of control & it's all 'cause they think they can do whatever they want to us & get away with it.
I have decided that I am going to start including "Call(s) to Action" at the end of some postings. I ask you all to please take action on these matters.
Until next time, I wish you...
Love & Blessings,
Kelly

PERSONAL NOTE: Avery, if you read this, I got your first letter today, but the return address was missing! I don't know where to write you! Please write again. Thanks!

Hello Kelly
Another darkly humourous missive from PlanetJail inc USA. Do You know how much the Government make from each incarceration the information below. From the Guardian newspaper

Over the past five years Corizon has been sued more than 1,300 times, according to analysis by financial research firm PrivCo. Alongside several wrongful death lawsuits, Corizon has also faced legal action over sexual misconduct of its doctors and nurses, including a female employee who paid inmates for sex.
Lawsuits haven’t stopped CMCG and Corizon from steadily increasing earnings for their private equity owners over the past few years. Corizon’s revenue has grown by 15.6% over the past three years to $1.55bn in 2015, according to analysis for the Guardian by PrivCo.
PrivCo estimates that CMCG, which is rapidly acquiring rival companies to expand beyond its California stronghold, made revenues of about $110m to $120m last year.
Corizon is owned by Chicago-based private equity firm Beecken, Petty, O’Keefe & Co. CMCG is owned by HIG Capital, a Miami-based private equity firm with $19bn of capital under management.

I live on another universe where the supergroup BABA have recently release their new single , I Don’t I Don’t I Don’t I Don’t I Don’t
I’ve recently been given an iPhone, my first one, at nearly 60 years old I’m very proud I’ve held out for so long. So I downloaded Spotify. Completely free music, you can build playlists choices of millions of tunes from around the world, it really is a magnificent thing. If only I could operate it properly. Also has the Joe Rogan podcasts on it. I can’t abide his stand up comedy’s shows, but his talks are first class. Quite a few astrophysicists on there, very interesting.
I wonder if COVID will change prisons forever? They seem to have gotten away with mass lockdowns. In Florida a CO was caught spraying bleach on an inmates food tray, had it been for hygiene I could understand it, but she went too far. Almost hygeniened him to death! Another death row unit has a CO who is grossly overweight giving out nocturnal handjobs in an attempt to create order. Wild. She has quite an audience too.
As far as Sally Fields and her buttocks go I think I can die happy without ever seeing those. But these are America’s sweetheart, and those buttock probably don’t look like the firm peaches they once were in her days of dating Burt Reynolds, (my aunties favourite
Always great to hear from you. You need to write a biography of your jail experience, as a gay man.A good title would be, “The odds are good, but the goods are odd”.
T
Ps. Although designed for cough suppression, its active ingredients (camphor and eucalyptus oil) may help treat toenail fungus. A 2011 study found that Vicks VapoRub had a “positive clinical effect” in the treatment of toenail fungus. To use, apply a small amount of Vicks VapoRub to the affected area at least once a day.
(scanned reply – view as blog post)
uploaded April 19, 2021.  Original (PDF) 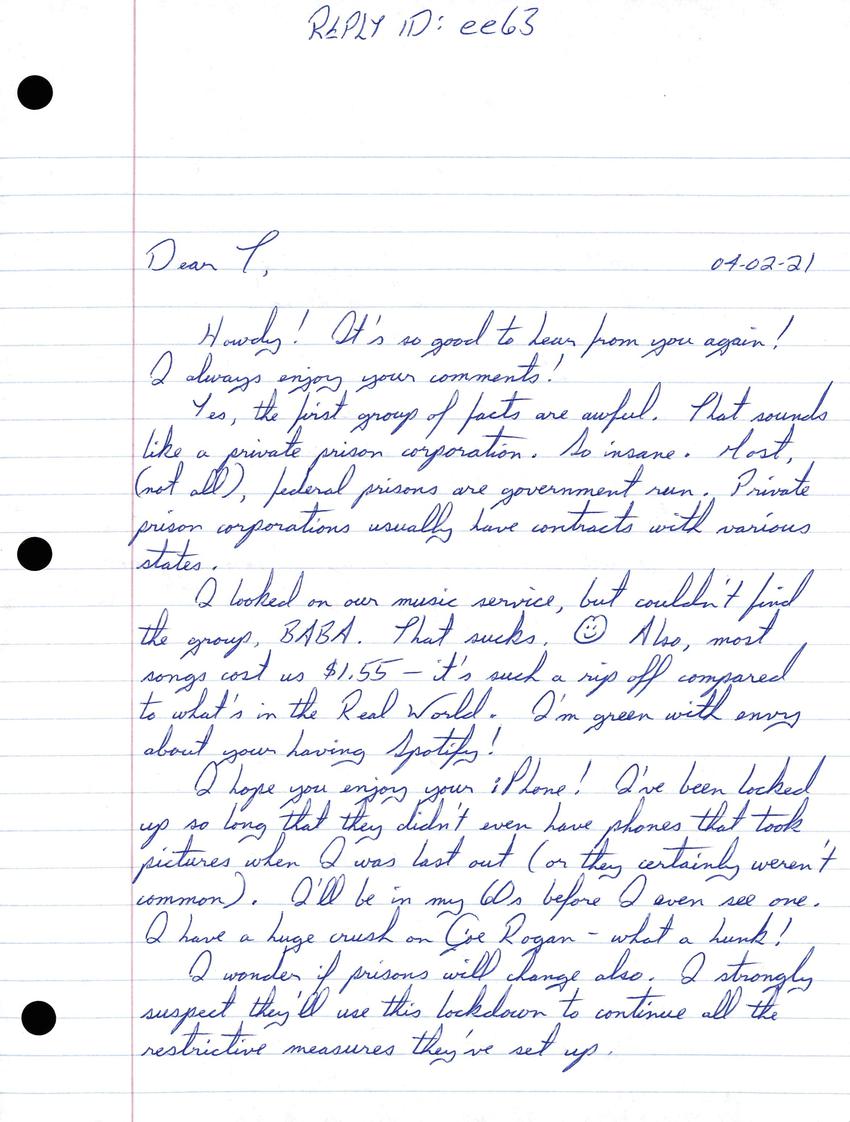 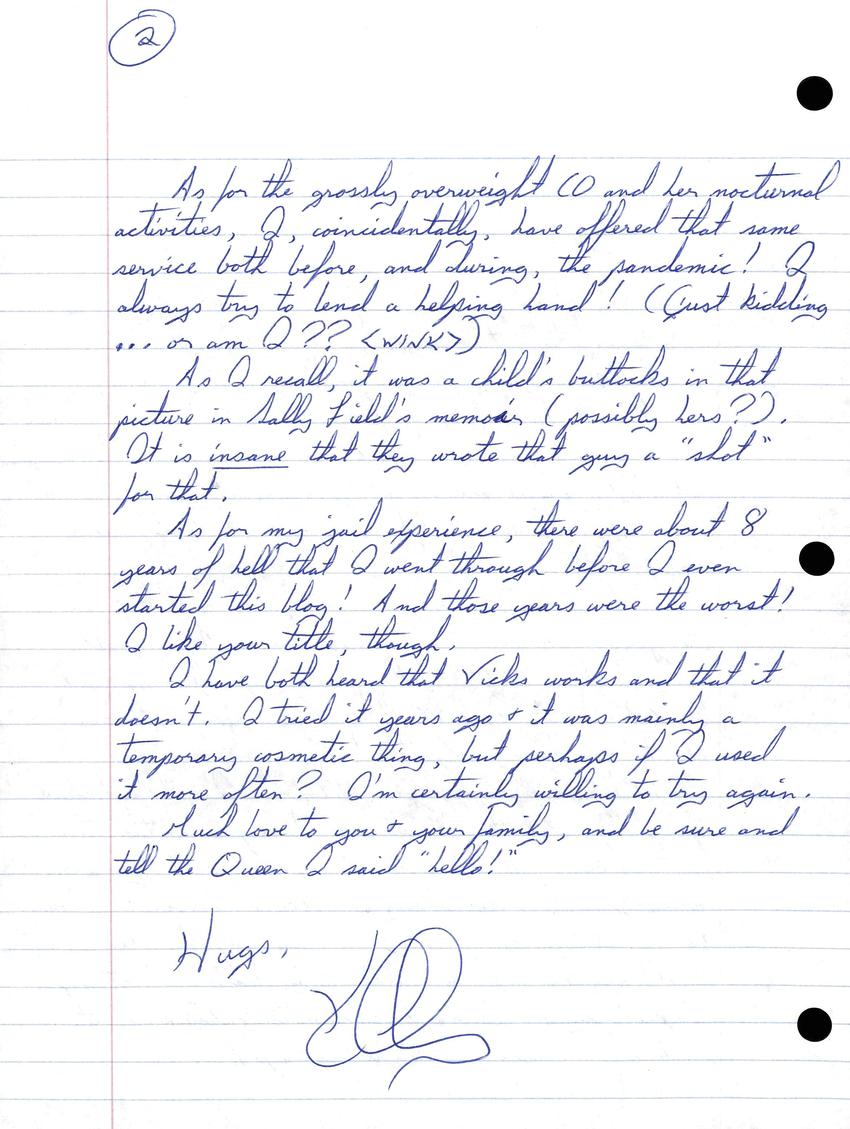