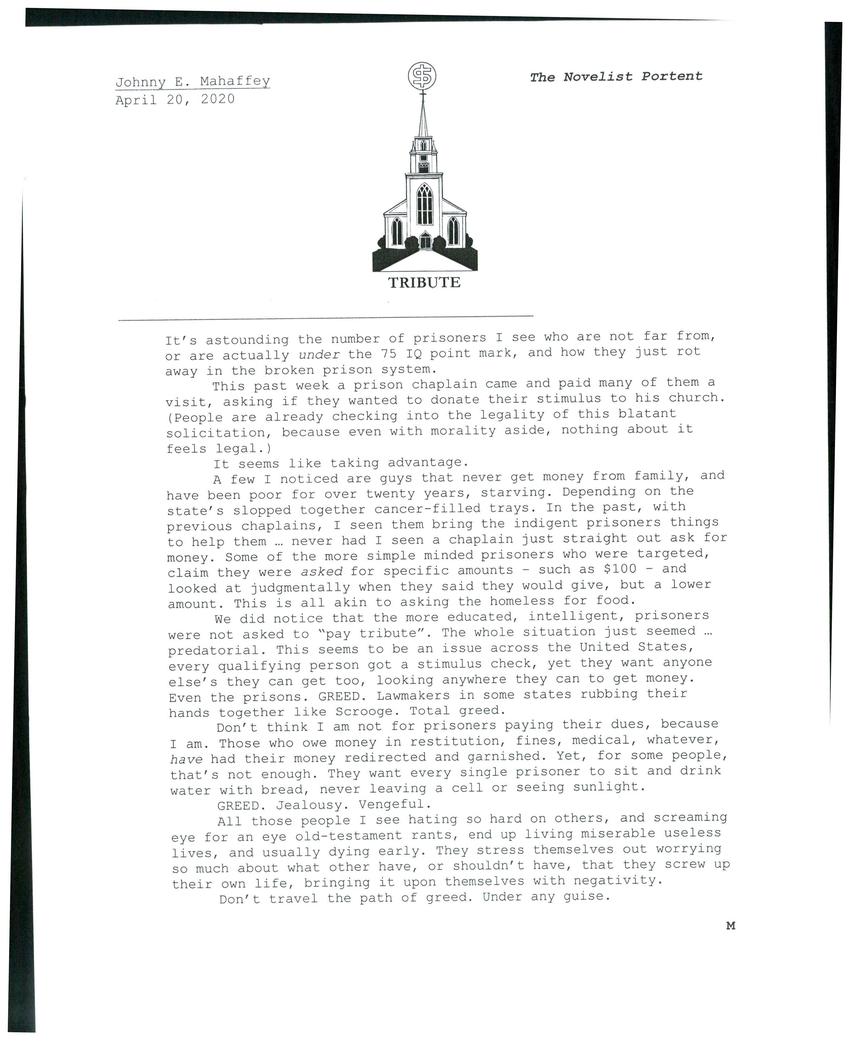 It's astounding the number of prisoners I see who are not far from, or are actually under the 75 IQ point mark, and how they just rot away in the broken prison system.

This past week a prison chaplain came and paid many of them a visit, asking if they wanted to donate their stimulus to his church. (People are already checking into the legality of this blatant solicitation, because even with morality aside, nothing about it feels legal.)

A few I noticed are guys that never get money from family, and have been poor for over twenty years, starving. Depending on the state's slopped together cancer-filled trays. In the past, with previous chaplains, I seen them bring the indigent prisoners things to help them … never had I seen a chaplain just straight out ask for money. Some of the more simple minded prisoners who were targeted, claim they were asked for specific amount - such as $100 - and looked at judgmentally when they said they would give, but a lower amount. This is all akin to asking the homeless for food.

We did notice that the more educated, intelligent, prisoners were not asked to "pay tribute". The whole situation just seemed … predatorial. This seems to be an issue across the United States, every qualifying person got a stimulus check, yet they want anyone else's they can get too, looking anywhere they can to get money. Even the prisons. GREED. Lawmakers in some states rubbing their hands together like Scrooge. Total greed.

Don't think I am not for prisoners paying their dues, because I am. Those who owe money in restitution, fines, medical, whatever, have had their money redirected and garnished. Yet, for some people, that's not enough. They want every single prisoner to sit and drink water with bread, never leaving a cell or seeing sunlight.

All those people I see hating so hard on others, and screaming eye for an eye old-testament rants, end up living miserable useless live, and usually dying early. They stress themselves out worrying so much about what other have, or shouldn't have, that they screw up their own life, bringing it upon themselves with negativity.

Don't travel the path of greed. Under any guise.

I think that exploiting other humans for money especially in this case is horrible. The system is broken and it's easy for me to say this as I m not in prison. But the least I can do, while I can not experience your pain but I think emphasizing is a good first step. I hope that you and others are able to find opportunities in prison so that you don't rot away with your intelligence as you mention. I hope brighter days are ahead. Stay strong.