Many Tracks of a Survivor 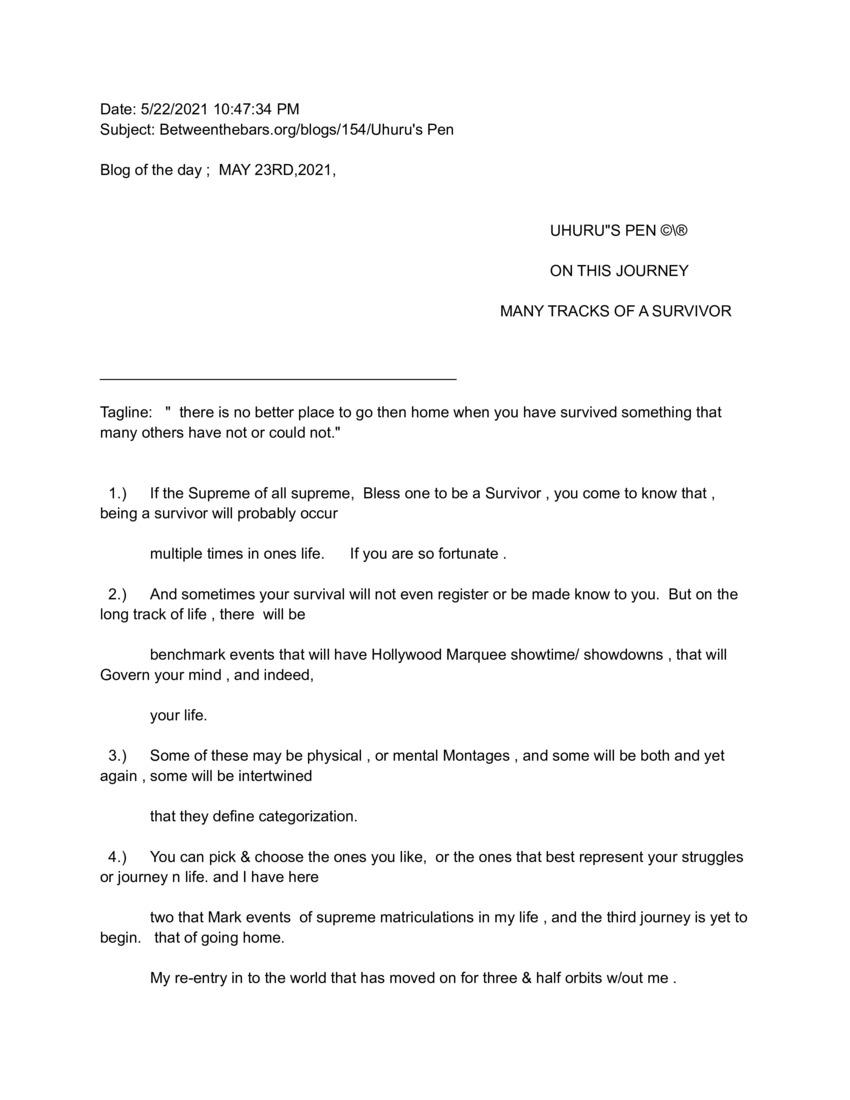 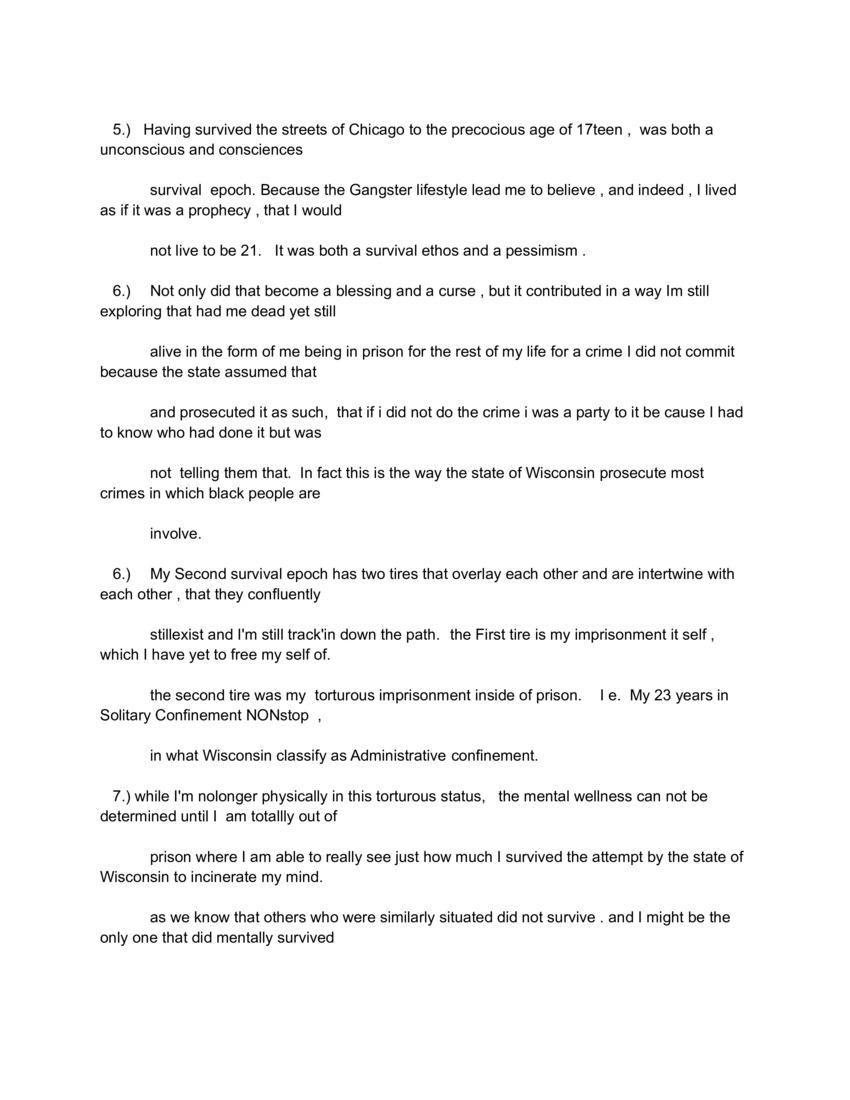 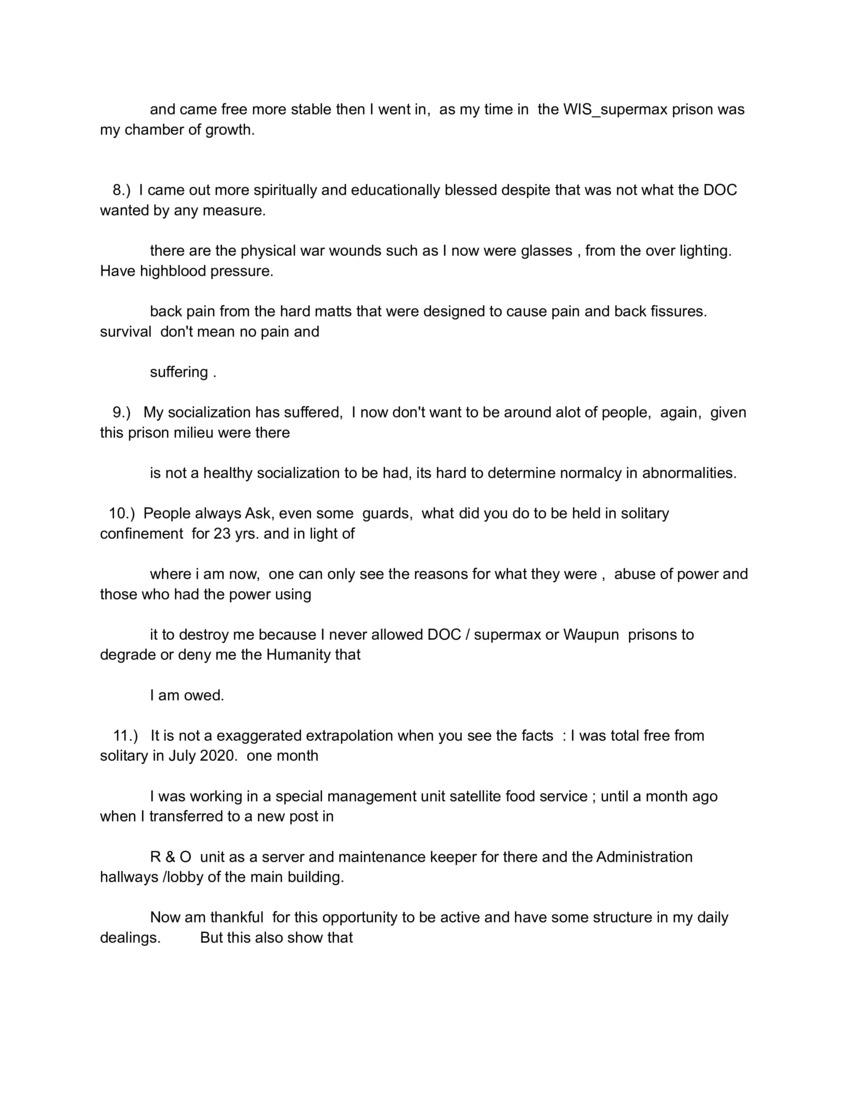 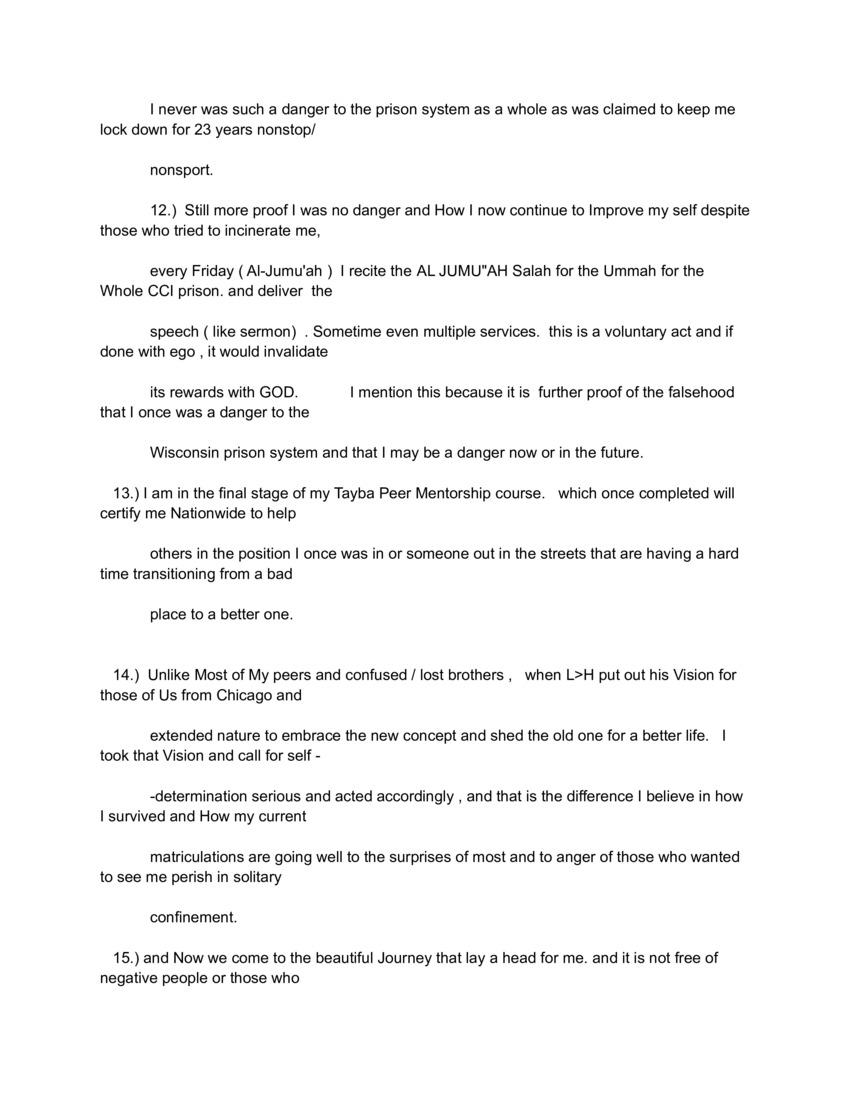 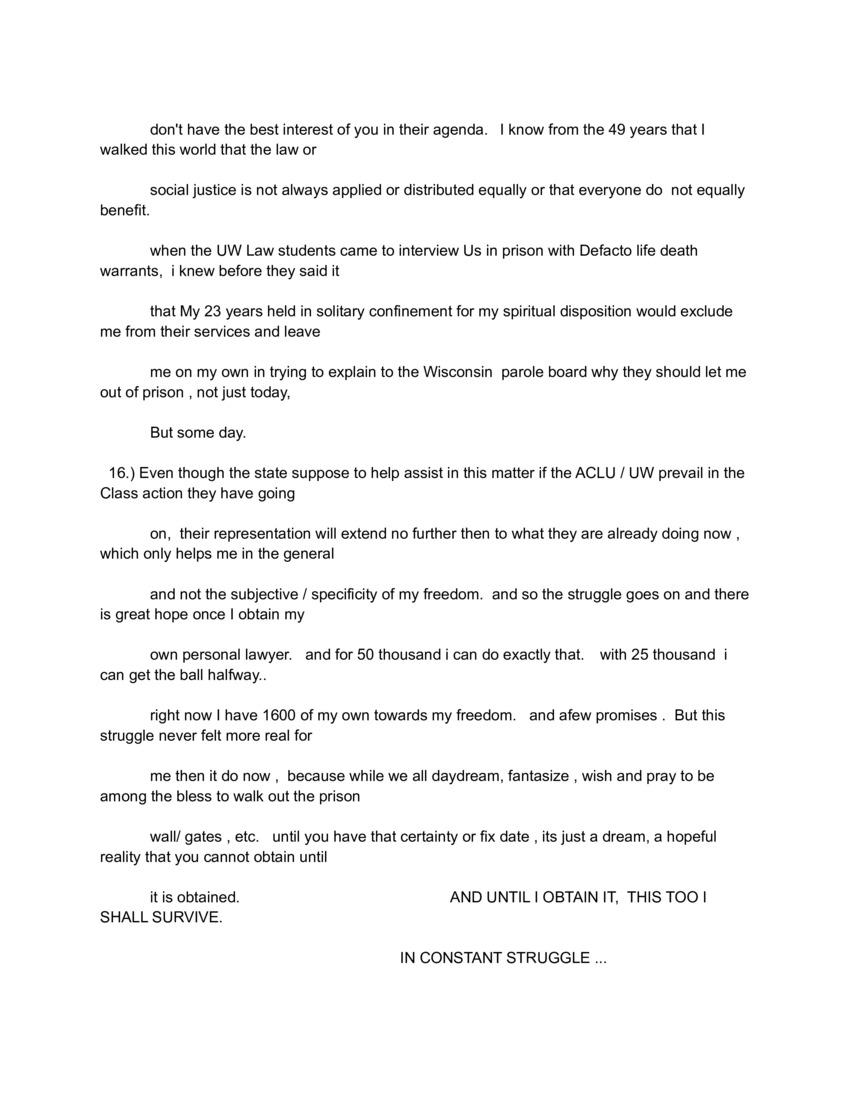 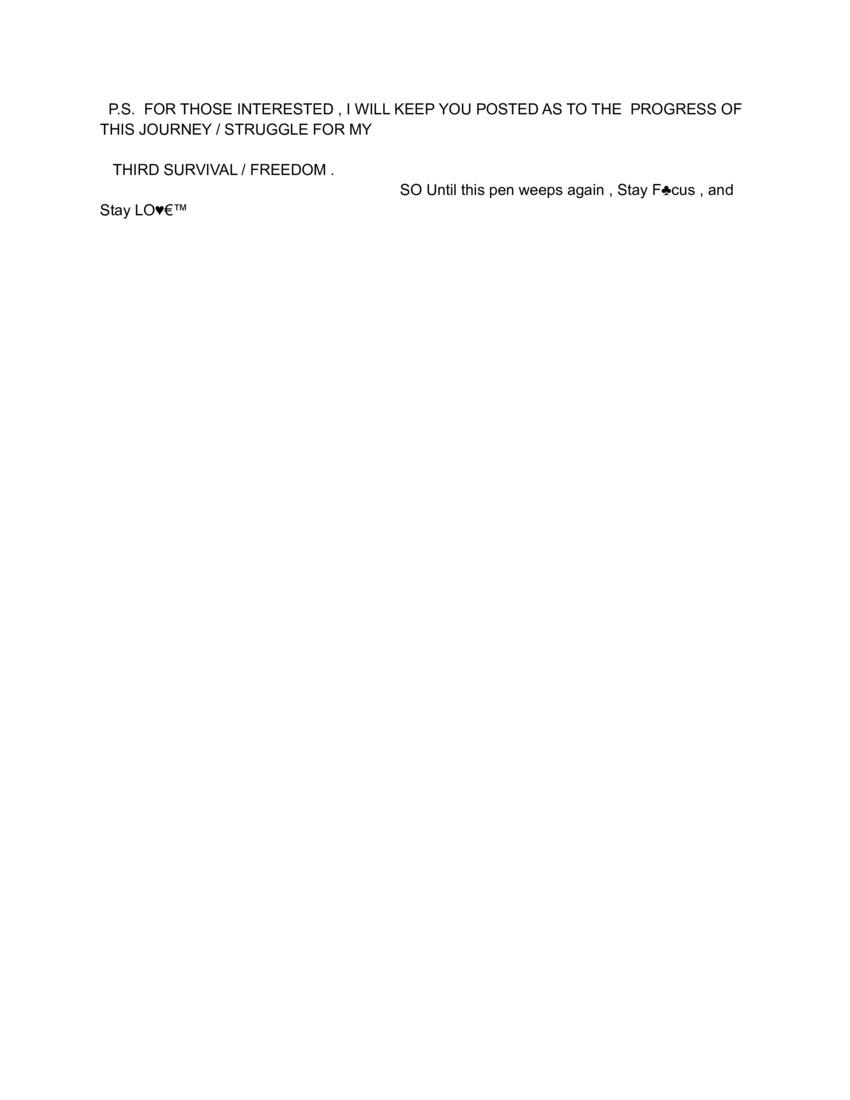 MANY TRACKS OF A SURVIVOR

Tagline: "there is no better place to go than home when you have survived something that many others have not or could not."

1.) If the Supreme of all supreme, Bless one to be a Survivor, you come to know that, being a survivor will probably occur multiple times in one's life. If you are so fortunate.

2.) And sometimes your survival will not even register or be made known to you. But on the long track of life, there will be benchmark events that will have Hollywood Marquee showtime/showdowns, that will Govern your mind, and indeed, your life.

3.) Some of these may be physical, or mental Montages, and some will be both and yet again, some will be intertwined that they define categorization.

4.) You can pick and choose the ones you like, or the ones that best represent your struggles or journey n life. and I have here two that Mark events of supreme matriculations in my life, and the third journey is yet to begin. that of going home. My re-entry in to the world that has moved on for three & half orbits w/out me.

5.) Having survived the streets of Chicago to the precocious age of 17teen, was both a unconscious and conscious survival epoch. Because the Gangster lifestyle lead me to believe, and indeed, as if it was a prophecy, that I would not live to be 21. It was both a survival ethos and a pessimism.

6.) Not only did that become a blessing and a curse, but it contributed in a way I'm still exploring that had me dead yet still alive in the form of me being in prison for the rest of my life for a crime I did not commit because the state assumed that and prosecuted it as such, that if I did not do the crime I was a party to it because I had to know who had done it but was not telling them that. In fact this is the way the state of Wisconsin prosecute most crimes in which black people are involved.

6.) My Second survival epoch has two tiers that overlay each other and are intertwined with each other, that they confluently still exist and I'm still tacking down the path. The First tier is my imprisonment itself, which I have yet to free myself of. The second tier was my tortuous imprisonment inside of prison. I.e. My 23 years in Solitary Confinement NON stop, in what Wisconsin classify as Administrative confinement.

7.) While I'm no longer physically in this torturous status, the mental wellness cannot be determined until I am totally out of prison where I am able to really see just how much I survived the attempt by the state of Wisconsin to incinerate my mind. As we know that others who were similarly situated did not survive. And I might be the only one that did mentally survive and came free more stable than I went in, as my time in the WIS supermax prison was my chamber of growth.

8.) I came out more spiritually and educationally blessed despite that was not what the DOC wanted by any measure. There are the physical war wounds such as I now wear glasses, from the over lighting. Have high blood pressure. Back pain from the hard matts that were designed to cause pain and back fissures. Survival don't mean no pain and suffering.

9.) My socialization has suffered, I now don't want to be around a lot of people, again, given this prison milieu where there is not a healthy socialization to be had, it's hard to determine normalcy in abnormalities.

10.) People always ask, even some guards, what did you do to be held in solitary confinement for 23 yrs. And in light of where I am now, one can only see the reasons for what they were, abuse of power and those who had the power using it to destroy me because I never allowed DOC/supermax or Waupun prisons to degrade or deny me the humanity that I am owed.

11.) It is not an exaggerated extrapolation when you see the facts: I was totally free from solitary in July 2020. One month I was working in a special management unit satellite food service; until a month ago when I transferred to a new post in R&O unit as a server and maintenance keeper for there and the Administration hallways/lobby of the main building. Now am thankful for this opportunity to be active and have some structure in my daily dealings. But this also shows that I never was such a danger to the prison system as a whole as was claimed to keep me in lock down for 23 years nonstop/nonsport.

12.) Still more proof I was no danger and how I now continue to improve my self despite those who tried to incinerate me, every Friday (Al-Jumu'ah) I recite the AL JUMU'AH Salah for the Ummah for the whole CCI prison. And deliver the speech (like sermon). Sometimes even multiple services. This is a voluntary act and if done with ego, it would invalidate its rewards with GOD. I mention this because it is further proof of the falsehood that I once was a danger to the Wisconsin prison system and that I may be a danger now or in the future.

13.) I am in the final stage of my Tayba Peer Mentorship course. Which once completed will certify me nationwide to help others in the position I once was in or someone out in the streets that are having a hard time transitioning from a bad place to a better one.

14.) Unlike most of my peers and confused/lost brothers, when L>H put out his vision for those of us from Chicago and extended nature to embrace the new concept and shed he old one for a better life. I too that vision and call for self-determination serious and acted accordingly, and that is the difference I believe in how I survived and how my current matriculations are going well to the surprises of most and to the anger of those who wanted to see me perish in solitary confinement.

15.) and now we come to the beautiful journey that lays ahead for me and it is not free of negative people or those who don't have the best interest of you in their agenda. I know from the 49 years that I walked this world that the law or social justice in not always applied or distributed equally or that everyone does not not equally benefit. When the UW Law students came to interview us in prison with de-facto life death warrants, I knew before they said it that my 23 years held in solitary confinement for my spiritual disposition would exclude me from their services and leave me on my own in trying to explain to the Wisconsin parole board why they should let me out of prison, not just today, but some day.

16.) Even though the state suppose to help assist in this matter if he ACLU/UW prevail in the class action they have going on, their representation will extend no further than to what they are already doing now, which only helps me in the general and not the subjective/specificity of my freedom. And so the struggle goes on and there is great hope once I obtain my own personal lawyer. And for 50 thousand I can do exactly that. With 25 thousand I can get the ball halfway.. Right now I have 1600 of my own towards freedom. And a few promises. But this struggle never felt more real for me than it does now, because while we all daydream, fantasize, wish and pray to be among the blessed to walk out the prison wall/gates, etc. Until you have that certainty or fix date, it's just a dream, a hopeful reality that you cannot obtain until it is obtained. AND UNTIL I OBTAIN IT, THIS TOO I SHALL SURVIVE. IN CONSTANT STRUGGLE…

P.S. FOR THOSE INTERESTED, I WILL KEEP YOU POSTED AS TO THE PROGRESS OF THIS JOURNEY/STRUGGLE FOR MY THIRD SURVIVAL/FREEDOM.

So until this pen weeps again, St♣y Focus, and Stay LO♥€™