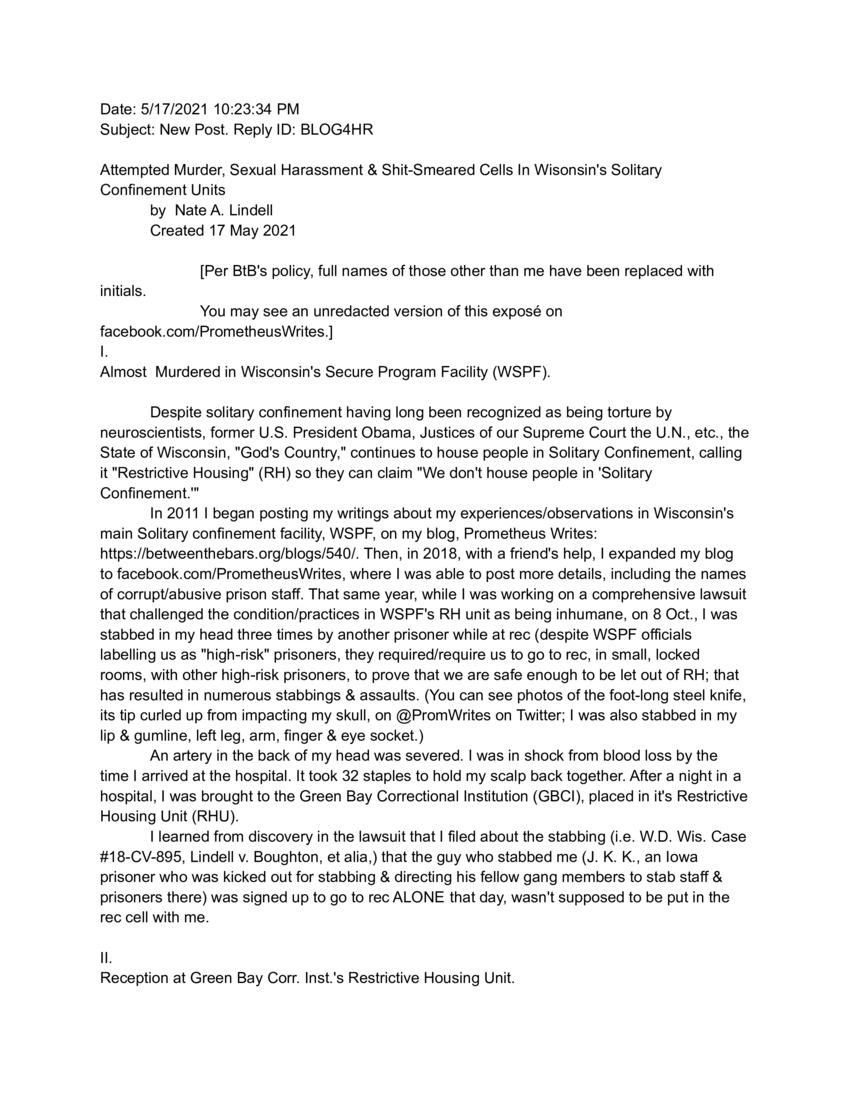 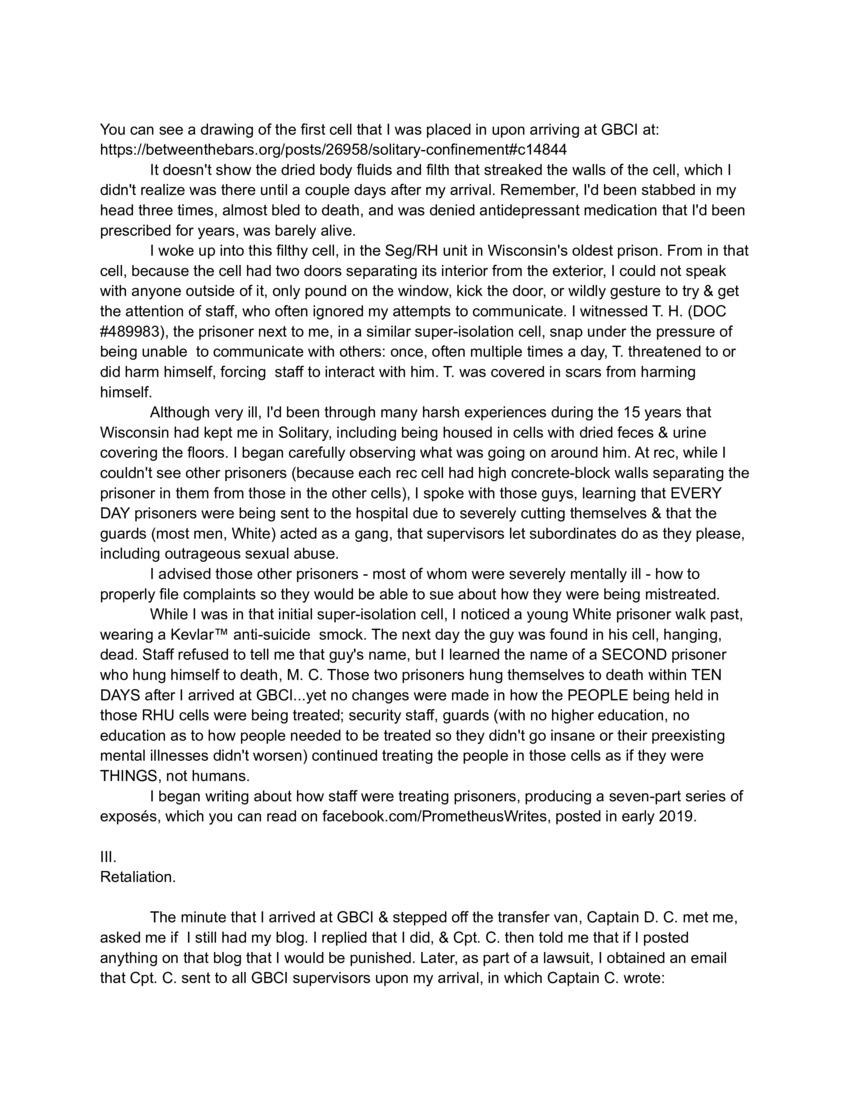 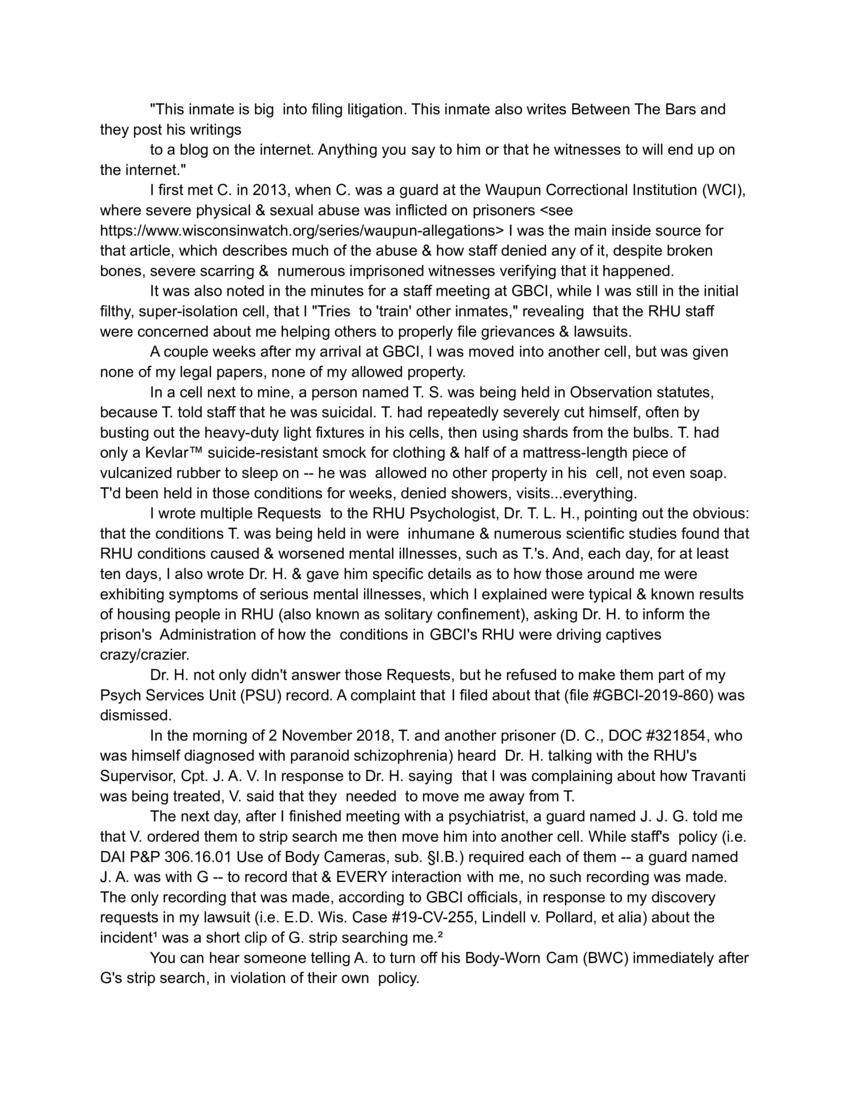 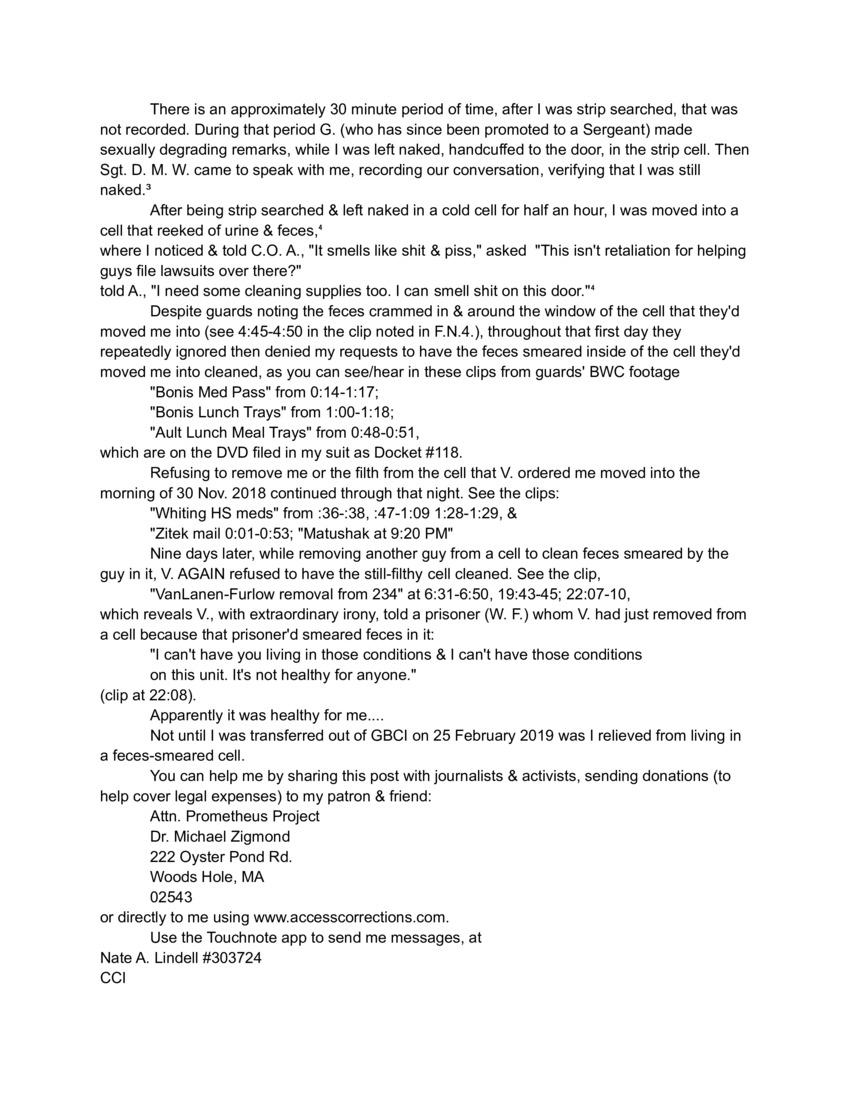 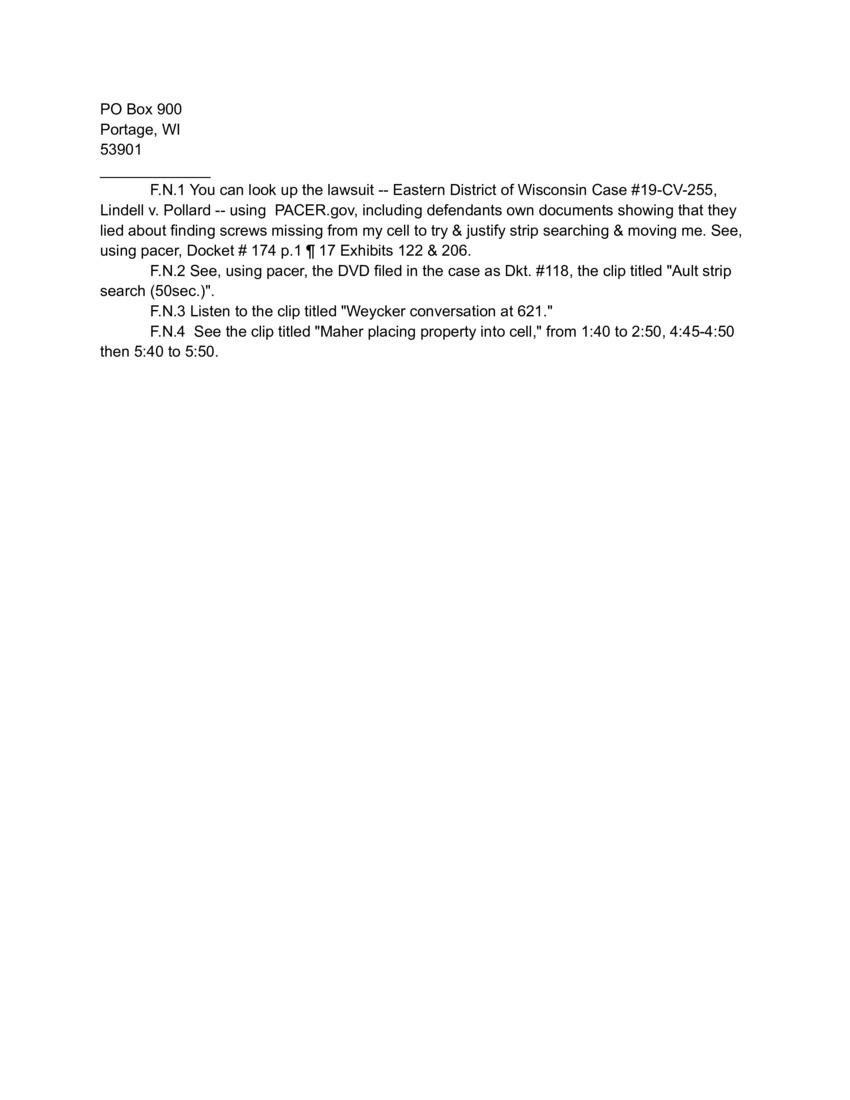 [Per BtB's policy, full names of those other than me have been replaced with initials. You may see an unredacted version of this exposé on facebook.com/PrometheusWrites.]

In 2011 I began posting my writings about my experiences/observations in Wisconsin's main solitary confinement facility, WSPF, on my blog, Prometheus Writes: https://betweenthebars.org/blogs/540/. Then, in 2018, with a friend's help, I expanded my blog to facebook.com/PrometheusWrites, where I was able to post more details, including the names of corrupt/abusive prison staff. That same year, while I was working on a comprehensive lawsuit that challenged the condition/practices in WSPF's RH unit as being inhumane, on 8 Oct., I was stabbed in my head three times by another prisoner while at rec (despite WSPF officials labelling us as "high-risk" prisoners, they required/require us to go to rec, in small, locked rooms, with other high-risk prisoners, to prove that we are safe enough to be let out of RH; that has resulted in numerous stabbings & assaults. (You can see photos of the foot-long steel knife, its tip curled up from impacting my skull, on @PromWrites on Twitter; I was also stabbed in my lip & gumline, left leg, arm, finger & eye socket.)

An artery in the back of my head was severed. I was in shock from blood loss by the time I arrived at the hospital. It took 32 staples to hold my scalp back together. After a night in a hospital, I was brought to the Green Bay Correctional Institution (GBCI), placed in its Restrictive Housing Unit (RHU).

I learned from discovery in the lawsuit that I filed about the stabbing (i.e. W.D. Wis. Case #18-CV-895, Lindell v. Boughton, et alia,) that the guy who stabbed me (J. K. K., an Iowa prisoner who was kicked out for stabbing & directing his fellow gang members to stab staff & prisoners there) was signed up to go to rec ALONE that day, wasn't supposed to be put in the rec cell with me.

You can see a drawing of the first cell that I was placed in upon arriving at GBCI at:
https://betweenthebars.org/posts/26958/solidary-confinement#c14844

It doesn't show the dried body fluids and filth that streaked the walls of the cell, which I didn't realize was there until a couple days after my arrival. Remember, I'd been stabbed in my head three times, almost bled to death, and was denied antidepressant medication that I'd been prescribed for years, was barely alive.

I woke up into this filthy cell, in the Seg/RH unit in Wisconsin's oldest prison. From in that cell, because the cell had two doors separating its interior from the exterior, I could not speak with anyone outside of it, only pound on the window, kick the door, or wildly gesture to try & get the attention of staff, who often ignored my attempts to communicate. I witnessed T.H. (DOC #489983), the prisoner next to me, in a similar super-isolation cell, snap under the pressure of being unable to communicate with others: once, often multiple times a day. T. threatened to or did harm himself, forcing staff to interact with him. T. was covered in scars from harming himself.

Although very ill, I'd been through many harsh experiences during the 15 years that Wisconsin had kept me in solitary, including being housed in cells with dried faeces & urine covering the floors. I began carefully observing what was going on around him. At rec, while I couldn't see other prisoners (because each rec cell had high concrete-block walls separating the prisoner in them from those in the other cells), I spoke with those guys learning that EVERY DAY prisoners were being sent to the hospital due to severely cutting themselves & that the guards (most men, White) acted as a gang, that supervisors let subordinates do as they please, including outrageous sexual abuse.

I advised those other prisoners - most of whom were severely mentally ill - how to properly file complaints so they would be able to sue about how they were being mistreated.

While I was that initial super-isolation cell, I noticed a young White prisoner walk past wearing a Kevlar™ anti-suicide smock. The next day the guy was found in his cell, hanging, dead. Staff refused to tell me that guy's name, but I learned the name of a SECOND prisoner who hung himself to death, M. C. Those two prisoners hung themselves to death within TEN DAYS after I arrived at GBCI... yet no changes were made in how the PEOPLE being held in those RHU cells were being treated; security staff, guards (with no higher education, no education as to how people needed to be treated so they didn't go insane or their preexisting mental illnesses didn't worsen) continued treating the people in those cells as if they were THINGS, not humans.

I began writing about how staff were treating prisoners, producing a seven-part series of exposés, which you can read on facebook.com/PrometheusWrites, posted in early 2019.

The minute that I arrived at GBCI & stepped off the transfer van, Captain D. C., met me, asked me if I still had my blog. I replied that I did, & Cpt. C. then told me that if I posted anything on that blog that I would be punished. Later, as part of a lawsuit, I obtained an email that Cpt. C. sent to all GBCI supervisors upon my arrival, in which Captain C. wrote:

I first met C. in 2013, when C. was a guard at the Waupun Correctional Institution (WCI), where severe physical & sexual abuse was inflicted on prisoners <see https://www.wisconsinwatch.org/series/waupun-allegations> I was the main inside source for that article, which describes much of the abuse & how staff denied any of it, despite broken bones, severe scarring & numerous imprisoned witnesses verifying that it happened.

It was also noted in the minutes for a staff meeting at GBCI, while I was still in the initial filthy, super-isolation cell, that I "tries to 'train' other inmates," revealing that the RHU staff were concerned about me helping others to properly file grievances & lawsuits.

A couple of weeks after my arrival at GBCI, I was moved into another cell, but was given none of my legal papers, none of my allowed property.

In a cell next to mine, a person named T.S. was being held in observation statutes, because T. told staff that he was suicidal. T. had repeatedly severely cut himself, often by busting out the heavy-duty light fixtures in his cells, then using shards from the bulbs. T. had only a Kevlar™ suicide-resistant smock for clothing & half of a mattress-length piece of vulcanized rubber to sleep on -- he was allowed no other property in his cell, not even soap. T'd been held in those conditions for weeks, denied showers, visits... everything.

I wrote multiple Requests to the RHU Psychologist, Dr. T. L. H., pointed out the obvious: that the conditions T. was being held in were inhumane & numerous scientific studies found that RHU conditions caused & worsened mental illnesses, such as T.'s. And, each day, for at least ten days, I also wrote Dr. H. & gave him specific details as to how those around me were exhibiting symptoms of serious mental illnesses, which I explained were typical & known results of housing people in RHU (also knows as solitary confinement), asking Dr. H. to inform the prison's Administration of how the conditions in GBCI's RHU were driving captives crazy/crazier.

Dr H. not only didn't answer those Requests, but he refused to make them part of my Psych Services Unit (PSU) record. A complaint that I filed about that (file #GBCI-2019-860) was dismissed.

In the morning of 2 November 2018, T. and another prisoner (D. C., DOC #321854, who was himself diagnosed with paranoid schizophrenia) heard Dr. H. saying that I was complaining about how Travanti was being treated, V. said that they needed to move me away from T.

The next day, after I finished meeting with a psychiatrist, a guard named J. J. G. told me that V. ordered them to strip search me then move him into another cell. While staff's policy (i.e. DAI P&P 306.16.01 Use of Body Cameras, sub. §I.B.) required each of them -- a guard named J.A. was with G -- to record that & EVERY interaction with me, no such recording was made. The only recording that was made, according to the GBCI officials, in response to my discovery requests in my lawsuit (i.e. E.D. Wis. Case #19-CV-255, Lindell v. Pollard, et alia) about the incident¹ was a short clip of G. strip searching me.²

You can hear someone telling A. to turn off his Body-Worn Cam (BWC) immediately after G's strip search, in violation of their own policy.

There is an approximately 30 minute period of time, after I was strip searched, that was not recorded. During that period G. (who has since been promoted to a Sergeant) made sexually degrading remarks, while I was left naked, handcuffed to the door, in the strip cell. Then Sgt. D. M. W. came to speak with me, recording our conversation, verifying that I was still naked.³

After being strip searched & left naked in a cold cell for half an hour, I was moved into a cell that reeked of urine & faeces,⁴ where I noticed & told C.O.A., "it smells like shit & piss," asked "this isn't retaliation for helping guys file lawsuits over there?"

told A., "I need some cleaning supplies too. I can smell shit on the door."⁴

Refusing to remove me or the filth from the cell that V. ordered me moved into the morning of 30 Nov. 2018 continued through that night. See the clips:

Nine days later, while removing another cell guy from a cell to clean faeces smeared by the guy in it, V. AGAIN refused to have the still-filthy cell cleaned. See the clip,

Apparently it was healthy for me...

Not until I was transferred out of GBCI on 25 February 2019 was I relieved from living in a faeces-smeared cell.

You can help me by sharing this post with journalists & activists, sending donations (to help cover legal expenses) to my patron & friend:

or directly to me using www.accesscorrections.com.

Use the Touchnote app to send me messages, at

F.N.3 Listen to the clip titled "Weycker conversation at 621."