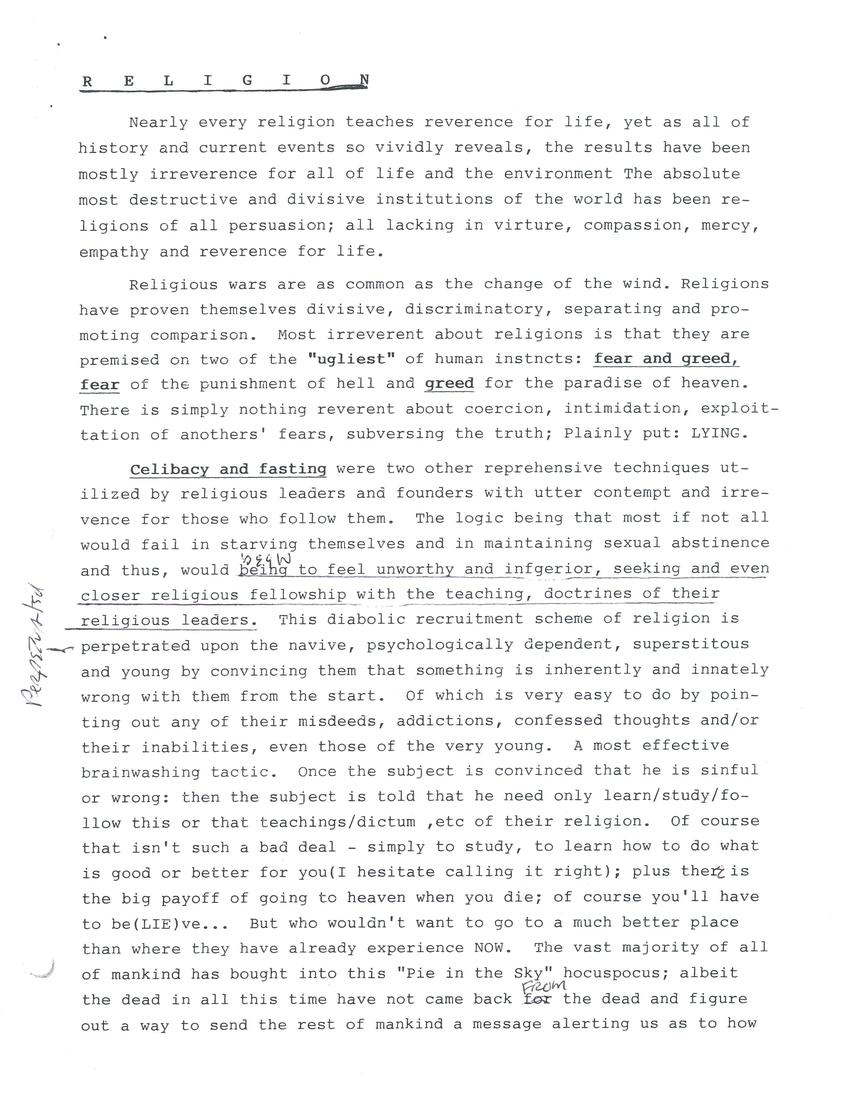 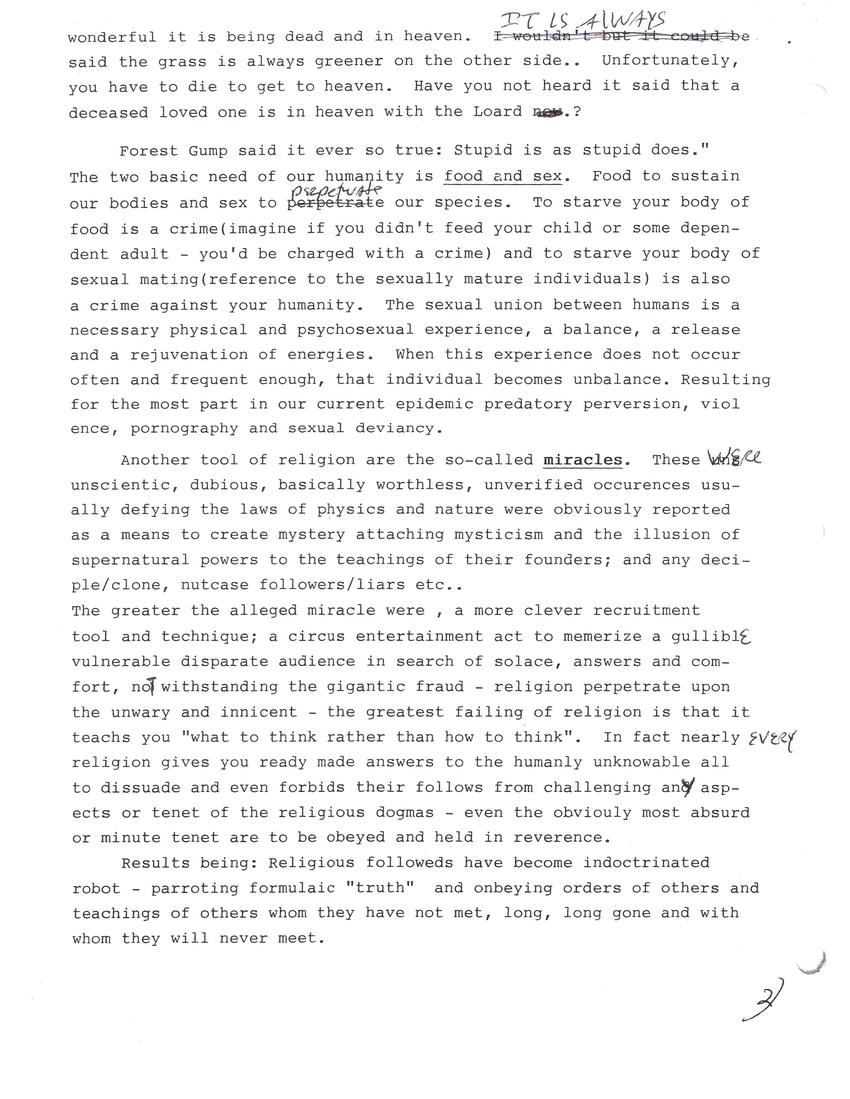 Nearly every religion teaches reverence for life, yet as all of history and current events so vividly reveals, the results have been mostly irreverence for all of life and the environment The absolute most destructive and divisive institutions of the world has been religions of all persuasion; all lacking in virtue, compassion, mercy, empathy and reverence for life.
Religious wars are as common as the change of the wind. Religions have proven themselves divisive, discriminatory, separating and promoting comparison. Most irreverent about religions is that they are premised on two of the "ugliest" of human instincts: fear and greed, fear of the punishment of hell and greed for the paradise of heaven. There is simply nothing reverent about coercion, intimidation, exploitation of another's fears, subversing the truth; Plainly put: LYING.
Celibacy and fasting were two other reprehensive techniques utilized by religious leaders and founders with utter contempt and irreverence for those who follow them. The logic being that most if not all would fail in starving themselves and in maintaining sexual abstinence and thus, would begin to feel unworthy and inferior, seeking and even closer religious fellowship with the teaching, doctrines of their religious leaders. This diabolic recruitment scheme of religion is perpetuated upon the naïve, psychologically dependent, superstitious and young by convincing them that something is inherently and innately wrong with them from the start. Of which is very easy to do by pointing out any any of their misdeeds, addictions, confessed thoughts and/or their inabilities, even those of the very young. A most effective brainwashing tactic. Once the subject is convinced that he is sinful or wrong: then the subject is told that he need only learn/study/follow this or that teachings/dictum, etc of their religion. Of course that isn't such a bad deal - simply to study, to learn how to do what is good or better for you (I hesitate calling it right); plus there is the big payoff of going to heaven when you die; of course you'll have to be(LIE)ve... But who wouldn't want to go to a much better place than where they have already experience NOW. The vast majority of all of mankind has brought into this "Pie in the Sky" hocus-pocus; albeit the dead in all this time have not come back from the dead and figure out a way to send the rest of mankind a message alerting us as to how

wonderful it is being head and in heaven. It is always said the grass is always greener on the other side... Unfortunately, you have to die to get to heaven. Have you not heard it said that a deceased loved one is in heaven with the Lord?
Forest Gump said it ever so true: Stupid is as stupid does." The two basic need of our humanity is food and sex. Food to sustain our bodies and sex to perpetuate our species. To starve your body of food is a crime (imagine if you didn't feed your child or some dependent adult - you'd be charged with a crime) and to starve your body of sexual mating (reference to the sexually mature individuals) is also a crime against your humanity. The sexual union between humans is a necessary physical and psychosexual experience, a balance, a release and a rejuvenation of energies. When this experience does not occur often and frequent enough, that individual becomes unbalance. Resulting for the most part in our current epidemic predatory perversion, violence, pornography and sexual deviancy.
Another tool of religion are the so-called miracles. These were unscientific, dubious, basically worthless, unverified occurrences usually defying the laws of physics and nature were obviously reported as a means to create mystery attaching mysticism and the illusion of supernatural powers to the teachings of their founders; and any disciple/clone, nutcase followers/liars etc...
The greater the alleged miracle were, a more clever recruitment tool and technique; a circus entertainment act to memorize a gullible vulnerable disparate audience in search of solace, answers and comfort, not withstanding the gigantic fraud - religion perpetrate upon the unwary and innocent - the greatest failing of religion is that it teaches you "what to think rather than how to think". In fact nearly every religion gives you ready made answers to the humanly unknowable all to dissuade and even forbids their follows from challenging any aspects or tenet are to be obeyed and held in reverence.
Results being: Religious followers have become indoctrinated robot - parroting formulaic "truth" and obeying orders of others and teachings of others whom they have not met, long, long gone with whom they will never meet.