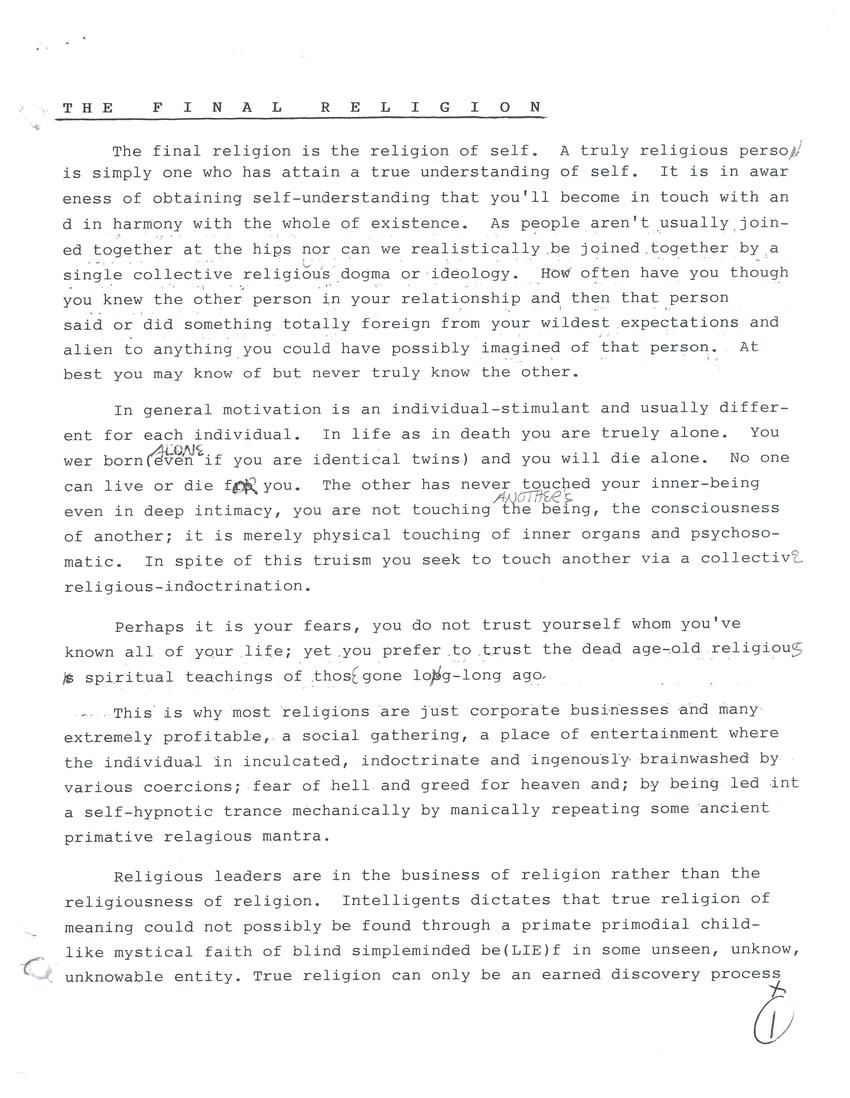 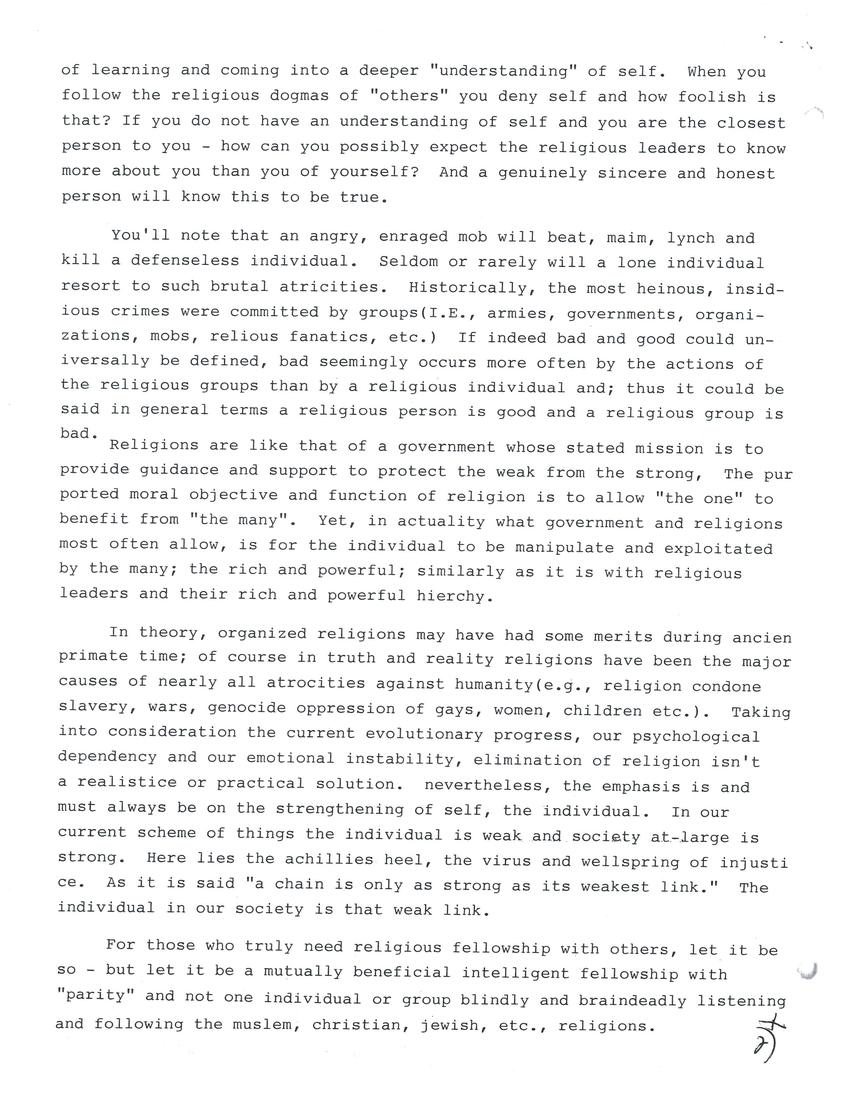 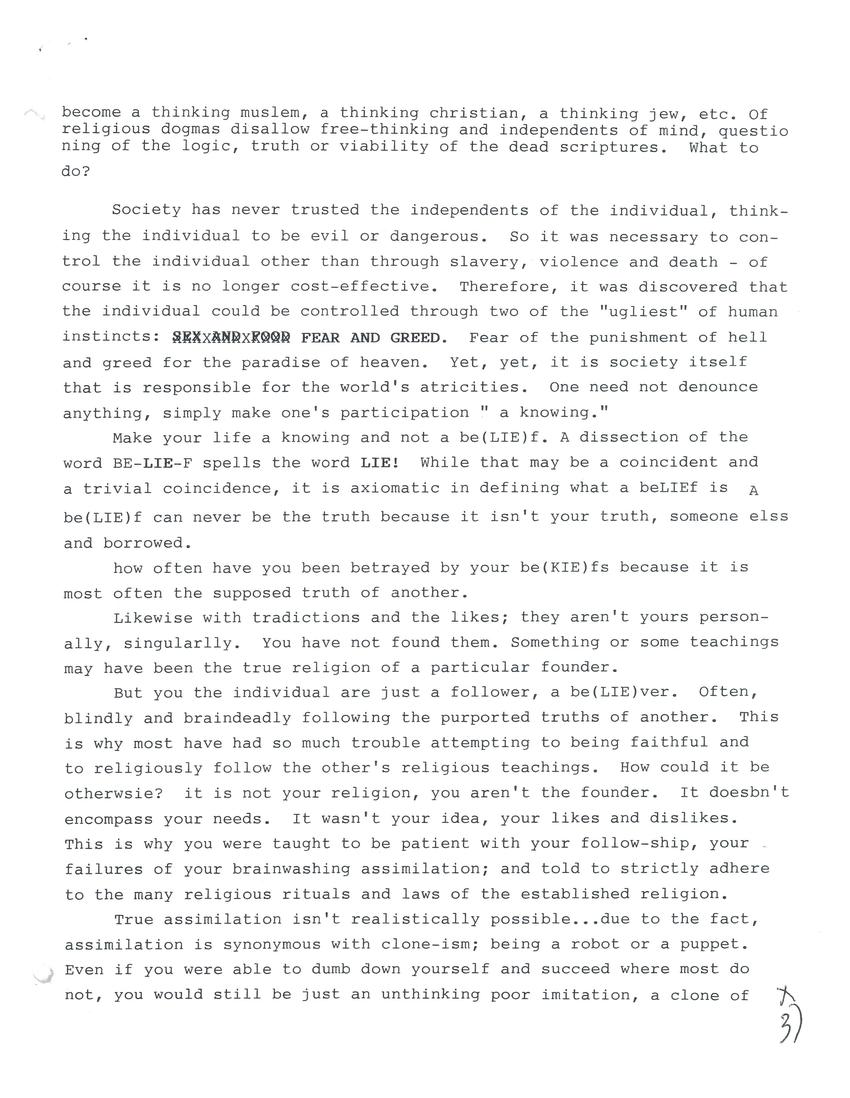 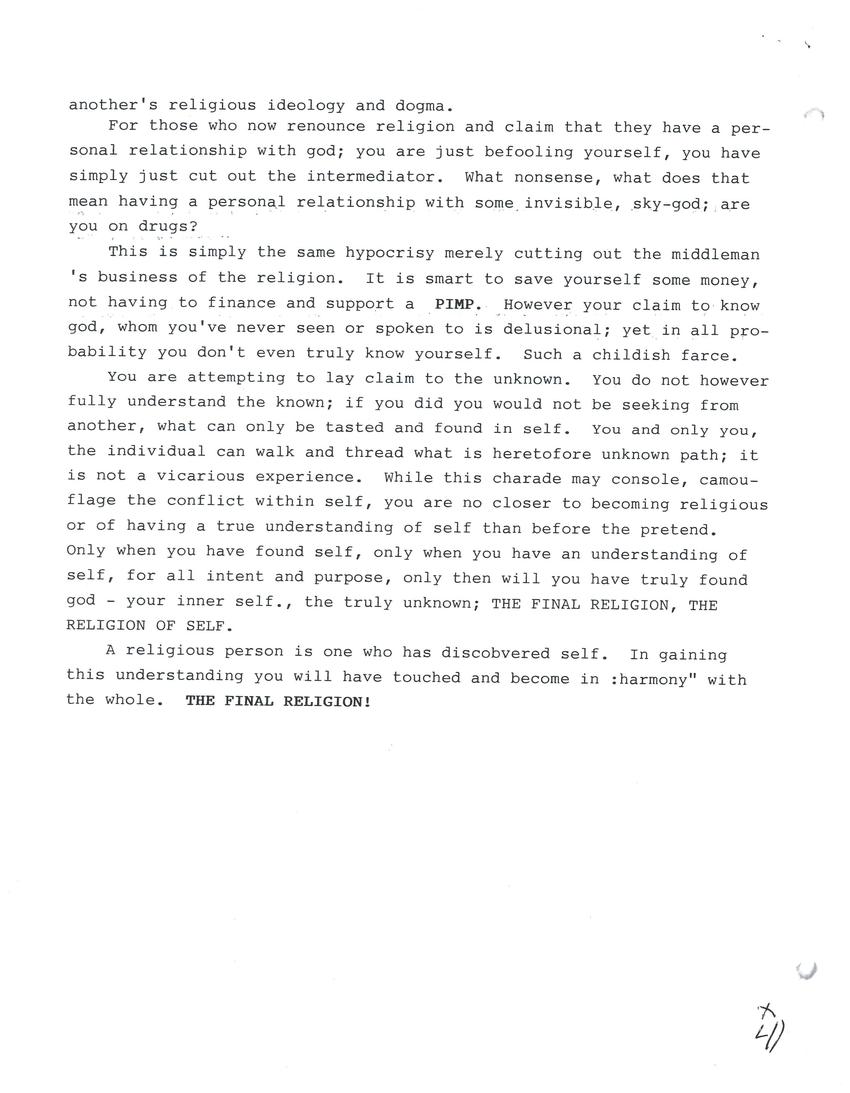 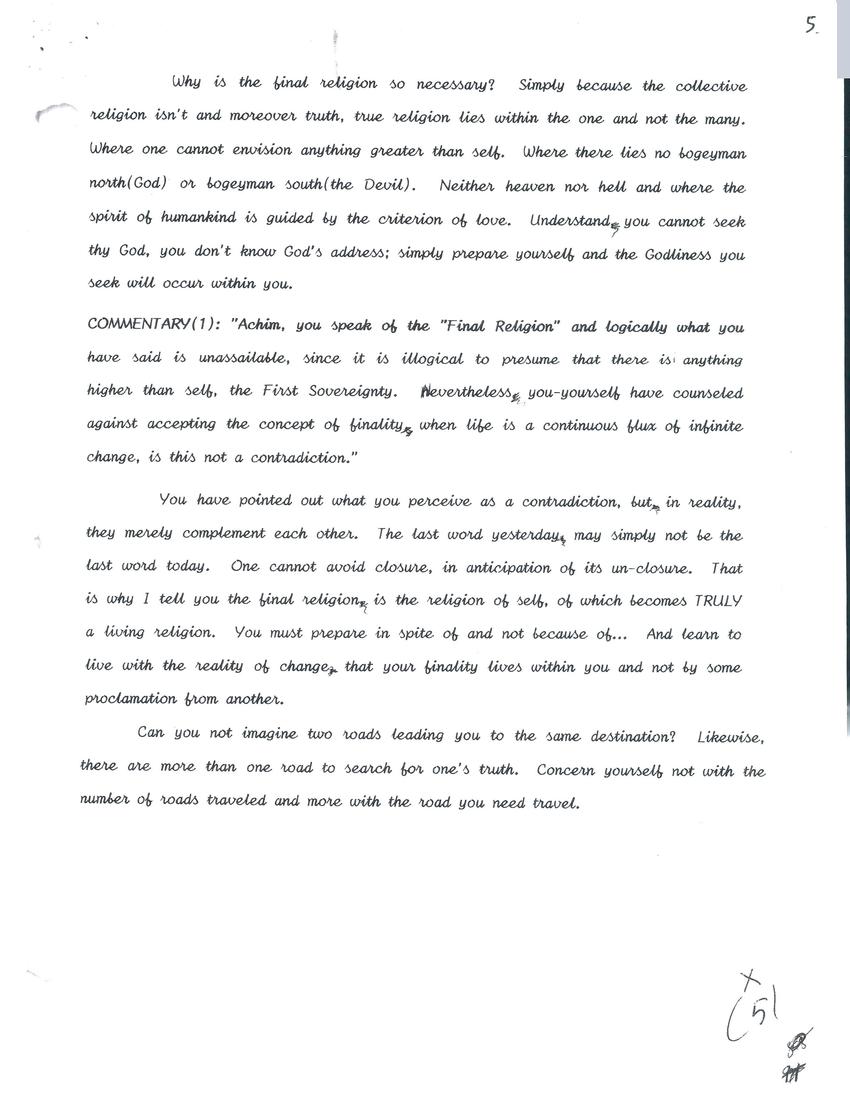 The final religion is the religion of self. A truly religious person is simply one who has attain a true understanding of self. It is in awareness of obtaining self-understanding that you'll become in touch with and in harmony with the whole of existence. As people aren't usually joined together at the hips nor can be realistically be joined together by a single collective religious dogma or ideology. How often have you thought you knew the other person in your relationship and then that person said or did something totally foreign from your wildest expectations and alien to anything you could have possibly imagined of that person. At best you may know of but never truly know the other.

In general motivation is an individual-stimulant and usually different for each individual. In life as in death you are truly alone. You were born alone even if you are identical twins and you will die alone. No one can live or die for you. The other has never touched your inner-being even in deep intimacy, you are not touching another being, the consciousness of another; it is merely physical touching of inner organs and psychosomatic. In spite of this truism you seek to touch another via a collective religious-indoctrination.

Perhaps it is your fears, you do not trust yourself whom you've known all of your life; yet you prefer to truth the dead age-old religious spiritual teachings of those gone long-long ago.

This is why most religions are just corporate businesses and many extremely profitable, a social gathering, a place of entertainment where the individual in inculcated, indoctrinate and ingeniously brainwashed by various coercions; fear of hell and greed for heaven and; by being led in a self-hypnotic trance mechanically by manically repeating some ancient primitive religious mantra.

Religious leaders are in the business of religion rather than the religiousness of religion. Intelligence dictates that true religion of meaning could not possibly be found through a primate primordial child-like mystical faith of blind simpleminded be(LIE)f in some unseen, unknow, unknowable entity. True religion can only be an earned discovery process

of learning and coming into a deeper "understanding" of self. When you follow the religious dogmas of "others" you deny self and how foolish is that? If you do not have an understanding of self and you are the closest person to you - how can you possibly expect the religious leaders to know more about you than you of yourself? And a genuinely sincere and honest person will know this to be true.

You'll note that an angry, enraged mob will beat, maim. lynch and kill a defenseless individual. Seldom or rarely will a lone individual resort to such brutal atrocities. Historically, the most heinous, insidious crimes were committed by groups(I.E., armies, governments, organizations, mobs, religious fanatics, etc.) If indeed bad and good could universally be defined, bad seemingly occurs more often by the actions of the religious groups than by a religious individual and; thus it could be said in general terms a religious person is good and a religious group is bad.

Religions are like that of a government whose stated mission is to provide guidance and support to protect the weak from the strong, the purported moral objective and function of religion is to allow "the one" to benefit from "the many". Yet in actuality what government and religions most often allow, is for the individual to be manipulate and exploited by the many; the rich and powerful; similarly as it is with religious leaders and their rich and powerful hierarchy.

In theory, organized religions may have had some merits during ancient primate time; of course in truth and reality religions have been the major causes of nearly all atrocities against humanity (e.g., religion condone slavery, wars, genocide, oppression of gays, women, children etc.). Taking into consideration the current evolutionary progress, our psychological dependency and our emotional instability, elimination of religion isn't a realistic or practical solution. Nevertheless, the emphasis is and must always be on the strengthening of self, the individual. In our current scheme of things the individual is weak and society at-large is strong. Here lies the Achilles heel, the virus and wellspring of injustice. As it is said "a chain is only as strong as its weakest link." The individual in our society is that weak link.

For those who truly need religious fellowship with others, let it be so - but let it be a mutually beneficial intelligent fellowship with "parity" and not one individual or group blindly and brain deadly listening and following the Muslim, Christian, Jewish, etc., religions.

become a thinking Muslim, a thinking Christian, a thinking Jew, etc. Of religious dogmas disallow free-thinking and independent of mind, questioning of the logic, truth or viability of the dead scriptures. What to do?

Society has never trusted the independents of the individual, thinking the individual to be evil or dangerous. So it was necessary to control the individual other than through slavery, violence and death - of course it is no longer cost-effective. Therefore, it was discovered that the individual could be controlled through two of the "ugliest" of human instincts: FEAR AND GREED. Fear of the punishment of hell and greed for the paradise of heaven. Yet, yet, it is society itself that is responsible for the world's atrocities. One need not denounce anything, simply make one's participation "a knowing."

Make your life a knowing and not a be(LIE)f. A dissection of the word BE-LIE-F spells the word LIE! While that may be a coincident and a trivial coincidence, it is axiomatic in defining what a beLIEf is a be(LIE)f can never be the truth because it isn't your truth, someone else and borrowed.

How often have you been betrayed by your be(LIE)fs because it is most often supposed truth of another.

Likewise with traditions and the likes; they aren't yours personally, singularly. You have not found them. Something or some teachings may have been the true religion of a particular founder.

But you the individual are just a follower, a be(LIE)ver. Often, blindly and brain deadly following the purported truths of another. This is why most have had so much trouble attempted to being faithful and to religiously follow the other's religious teachings. How could it be otherwise? It is not your religion, you aren't the founder. It doesn't encompass your needs. It wasn't your idea, your likes and dislikes. This is why you were taught to be patient with your follow-ship, your failures of your brainwashing assimilation; and told to strictly adhere to the many religious rituals and laws of the established religion.

This is simply the same hypocrisy merely cutting out the middleman's business of the religion. It is smart to save yourself some money, not having to finance and support a PIMP. However your claim to know god, whom you've never seen or spoken to is delusional; yet in all probability you don't even truly know yourself. Such a childish farce.

You are attempting to lay claim to the unknown. You do not however fully understand the known; if you did you would not be seeking from another, what can only be tasted and found in self. You and only you, the individual can walk and threat what is heretofore unknown path; it is not a vicarious experience. While this charade may console, camouflage the conflict within self, you are no closer to becoming religious or of having a true understanding of self than before the present. Only when you have found self, only when you have an understanding of self, for all intent and purpose, only then will you have truly found god - your inner self., the truly unknown; THE FINAL RELIGION, THE RELIGION OF SELF.

A religious person is one who has discovered self. In gaining this understanding you will have touched and become in :harmony" with the whole. THE FINAL RELIGION!

Why is the final religion so necessary? Simply because the collective religion isn't and moreover truth, true religion lies within the one and not the many. Where one cannot envision anything greater than self. Where there lies no bogeyman north (God) or bogeyman south (the Devil). Neither heaven nor hell and where the spirit of humankind is guided by the criterion of love. Understand you cannot seek thy God, you don't know God's address; simply prepare yourself and the Godliness you seek will occur within you.
COMMENTARY(1): "Achim, you speak of the "Final Religion" and logically what you have said is unassailable, since it is illogical to presume that there is anything higher than self, the First Sovereignty. Nevertheless, you-yourself have counseled against accepted the concept of finality when life is a continuous flux of infinite change, is this not a contradiction."
You have pointed out what you perceive as a contradiction, but in reality, they merely complement each other. The last word yesterday may simply not be the last word today. One cannot avoid closure, in anticipation of its un-closure. That is why I tell you the final religion is the religion of self, of which becomes TRULY a living religion. You must prepare in spite of and not because... And learn to live with the reality of change that your finality lives within you and not by some proclamation from another.
Can you not imagine two wads leading you to the same destination? Likewise, there are more than one wad to search for one's truth. Concern yourself not with the number of roads traveled and more with the wad you need travel.