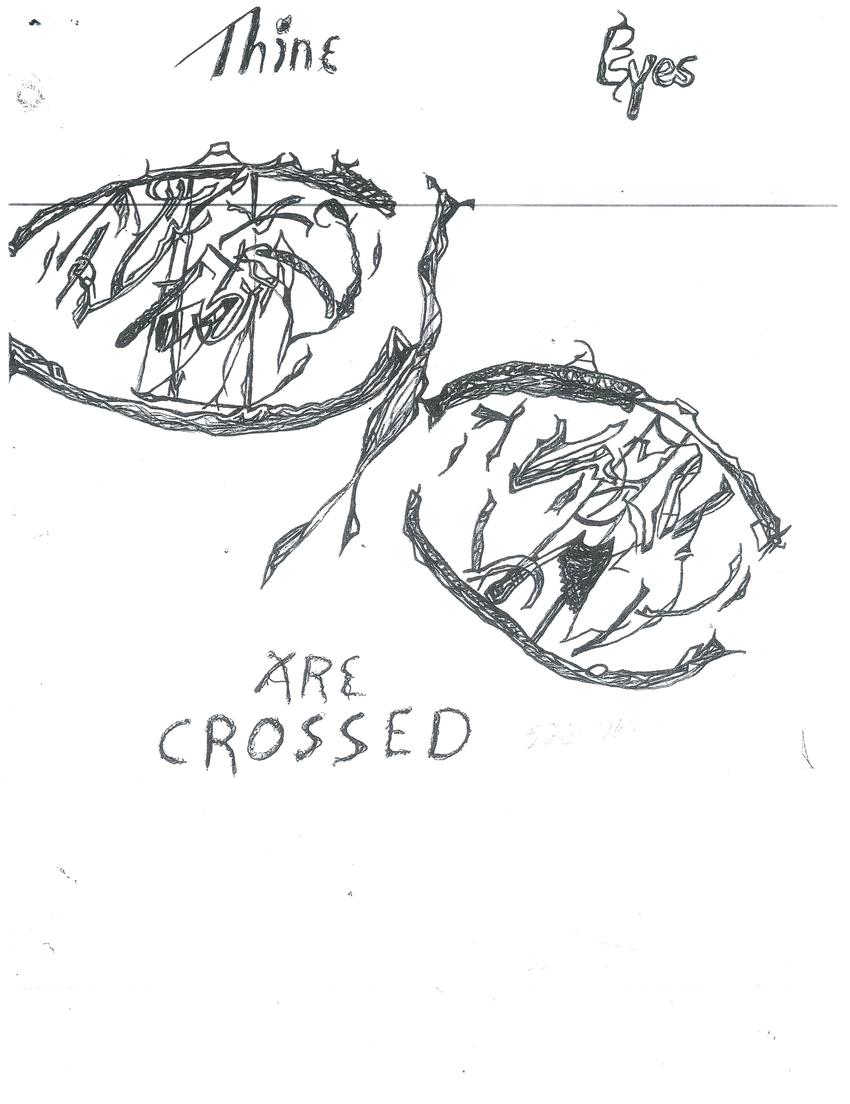 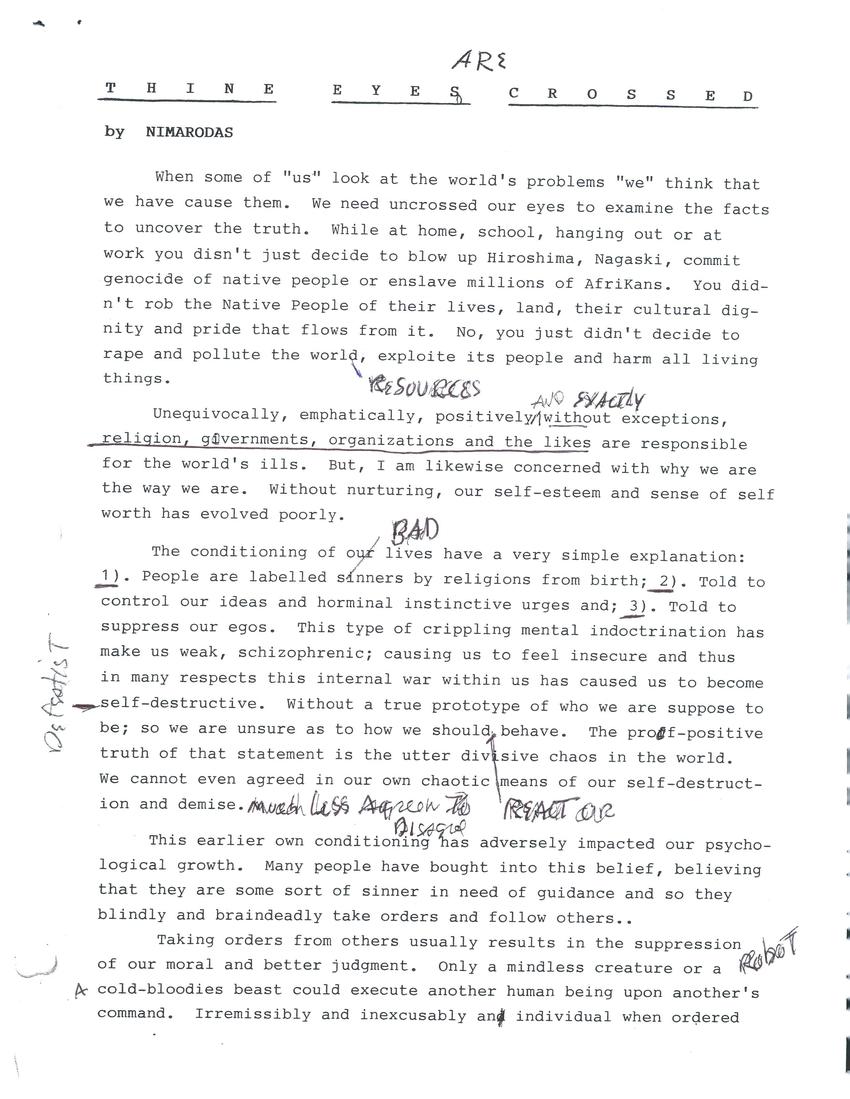 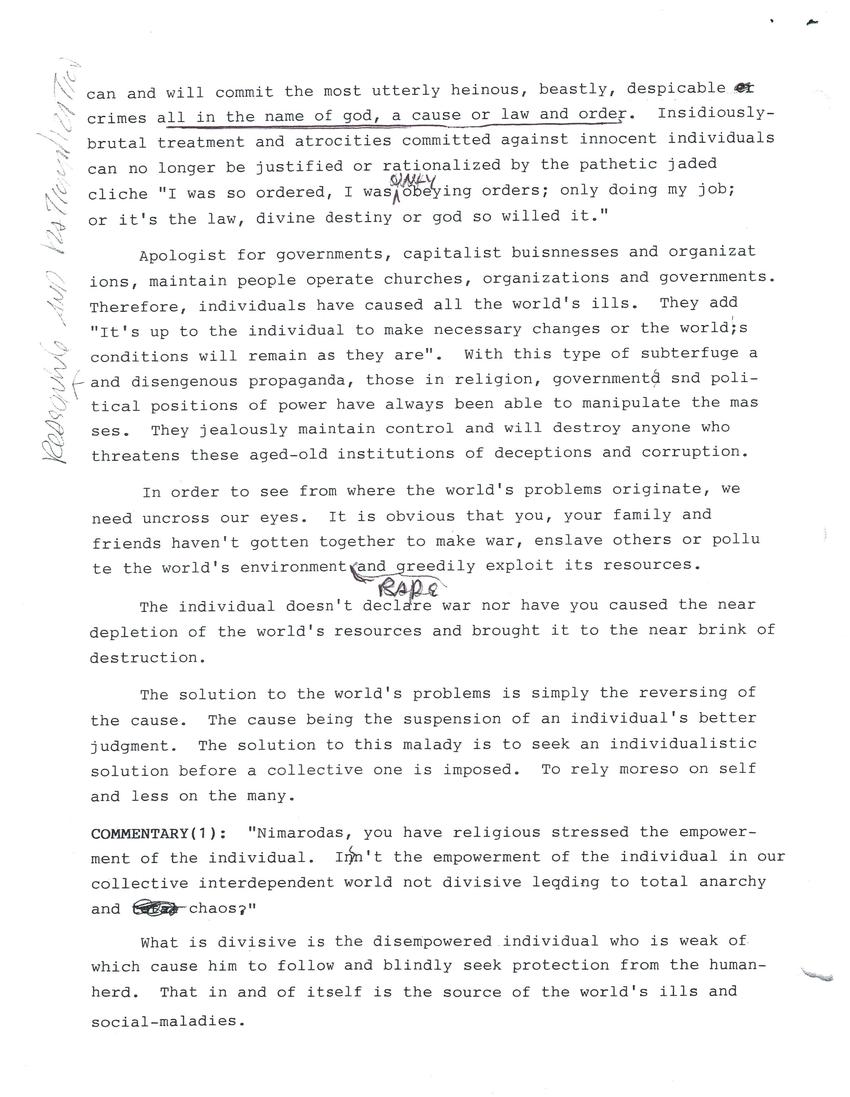 When some of "us" look at the world's problems "we" think that we have cause them. We need uncrossed our eyes to examine the facts to uncover the truth. While at home, school, hanging out or at work you didn't just decide to blow up Hiroshima, Nagasaki, commit genocide of native people or enslave millions of Africans. You didn't rob the Native People of their lives, land, their cultural dignity and pride that flows from it. No, you just didn't decide to rape and pollute the world or resources, exploit its people and harm them all living things.
Unequivocally, emphatically, positively and exactly without exceptions, religion, governments, organizations and the likes are responsible for the world's ills. But, I am likewise concerned with why we are the way we are. Without nurturing, our self-esteem and sense of self worth has evolved poorly.
The conditioning of our lives have a very simple explanation: 1). People are labelled sinners by religious from birth; 2). Told to control our ideas and hormonal instinctive urges and; 3). Told to suppress our egos. This type of crippling mental indoctrination has make us weak, schizophrenic; causing us to feel insecure and thus in many respects this internal war within us has caused us to become self-destructive. Without a true prototype of who we are suppose to be; so we are unsure as to how we should react or behave. The proof-positive truth of that statement is the utter divisive chaos in the world. We cannot even agreed in our own chaotic means of our self-destruction and demise.
This earlier own conditioning has adversely impacted our psychological growth. Many people have bought into this belief, believing that they are some sort of sinner in need of guidance and so they blindly and brain deadly take orders and follow others...
Taking orders from others usually results in the suppression of our moral and better judgement. Only a mindless creature or a robot a cold bloodies beast could execute another human being upon another's command. Irremissibly and inexcusably and individual when ordered

can and will commit the most utterly heinous, beastly, despicable crimes all in the name of god, a cause or law and order. Insidiously brutal treatment and atrocities committed against innocent individuals can no longer be justified or rationalized by the pathetic jaded cliché "I was so ordered, I was only obeying orders; only doing my job; or it's the law, divine destiny or god so willed it."
Apologist for governments, capitalist businesses and organizations, maintain people operate churches, organizations and governments. Therefore, individuals have caused all the world's ills. They add "It's up to the individual to make necessary changes or the world's condition will remain as they are". With this type of subterfuge a and disingenuous propaganda, those in religion, governments and political positions of power have always been able to manipulate the masses. They jealously maintain control and will destroy anyone who threatens these aged-old institutions of deceptions and corruption.
In order to see from where the world's problems originate, we need uncross our eyes. It is obvious that you, your family and friends haven't gotten together to make war, enslave others or pollute the world's environment, rape and greedily exploit its resources.
The individual doesn't declare war nor have you caused the near depletion of the world's resources and brought it to the near brink of destruction.
The solution to the world's problems is simply the reversing of the cause. The cause being the suspension of an individual's better judgement. The solution to this malady is to seek an individualistic solution before a collective one is imposed. To rely more so on self and less on the many.
COMMENTARY(1): "Nimarodas, you have religious stressed the empowerment of the individual. In the empowerment of the individual in our collective interdependent world not divisive legding to total anarchy and chaos."
What is divisive is the disempowered individual who is weak of which cause him to follow and blindly seek protection from the human-herd. That in and of itself is the source of the world's ills and social-maladies.