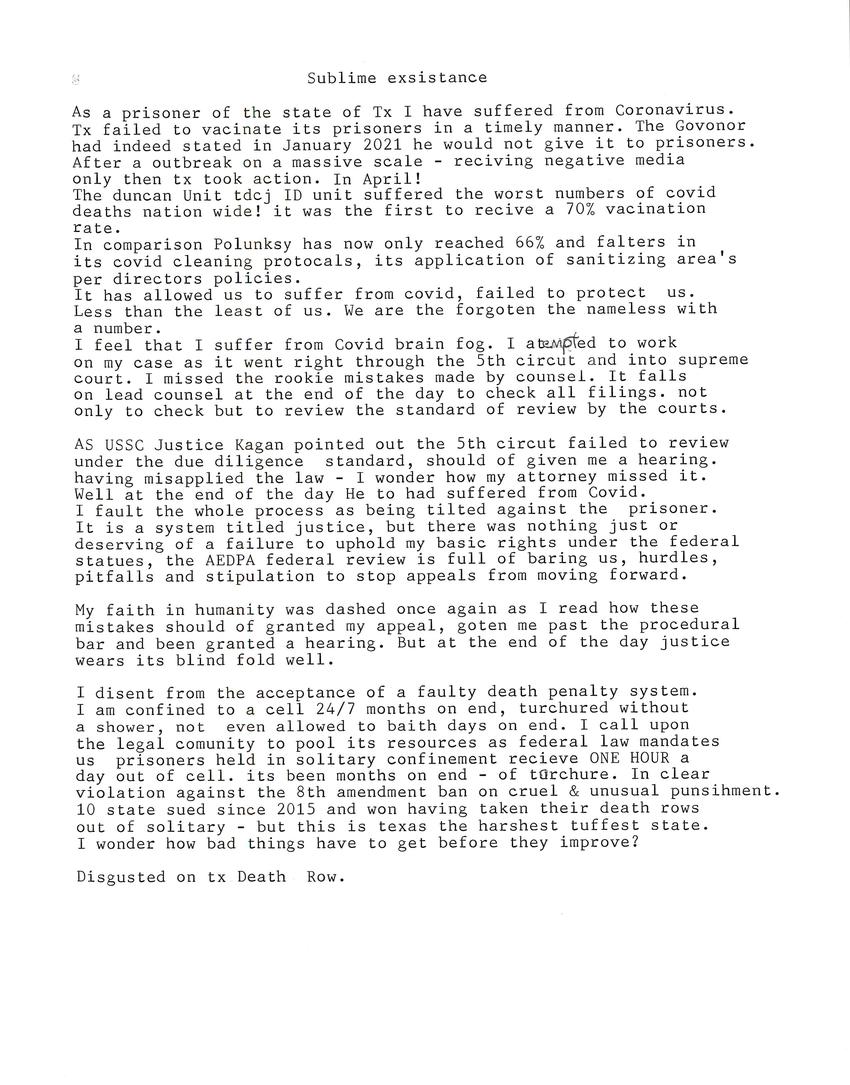 As a prisoner of the state of TX I have suffered from Coronavirus. TX failed to vaccinate its prisoners in a timely manner. The Governor had indeed stated in January 2021 he would not give it to prisoners. After an outbreak on a massive scale - receiving negative media only then TX took action. In April!
The duncan Unit tdcj ID unit suffered the worst numbers of COVID deaths nation wide! It was the first to receive a 70% vaccination rate.
In comparison Polunsky has now only reached 66% and falters in its COVID cleaning protocols, its application of sanitizing area's per directors policies.
It has allowed us to suffer from COVID, failed to protect us. Less than he least of us. We are the forgotten, the nameless with a number.
I feel that I suffer from COVID brain frog. I attempted to work on my case as it went right through the 5th circuit and into supreme court. I missed the rookie mistakes made by counsel. It falls on lead counsel at the end of the day to check all filings. Not only to check but to review the standard of review by the courts.

As USSC Justice Kagan pointed out the 5th circuit failed to review under the due diligence standard, should of given me a hearing. Having misapplied the law - I wonder how my attorney missed it. Well at the end of the day, he had suffered from COVID. I fault the whole process as being tilted against the prisoner. It is a system titled justice, but there was nothing just or derserving of a failure to uphold my basic rights under the federal statues, the AEDPA federal review is full of baring us, hurdles, pitfalls and stipulation to stop appeals from moving forward.

My faith in humanity was dashed once again as I read how these mistakes should of granted my appeal, gotten me past the procedural bar and been granted a hearing. But at the end of the day justice wears its blind fold well.

I dissent from the acceptance of a faulty death penalty system. I am confined to a call 24/7 months on end, tortured without a shower, not even allowed to bathe days on end. I call upon the legal community to pool its resources as federal law mandates us prisoners held in solitary confinement receive ONE HOUR a day out of cell. Its been months on end - of torture. In clear violation against the 8th amendment ban on cruel & unusual punishment. 10 states sued since 2015 and won having taken their death rows out of solitary - but this is Texas, the harshest toughest state. I wonder how bad things have to get before they improve?

I woke up this morning thinking of my friend Darren. I miss him dearly. All of his friends do. He was taken from us way too soon.
There have been many times that I have thought I would love to hang out with Darren and talk like we used to do.
I remember getting a call from Darren. He was telling one of his best friends that he might need some help because he thought Charles might cause some problems. We never got that call. Why? Because you murdered him. There is NO good reason for Darren or Denise's deaths.
Just think about how many peoples lives were impacted when Darren and Denise died.
I have not read all your posting on this blog and I don't plan to. You deserve to be there. You murdered two people escaped from jail and also tried to hire someone to murder a witness.
I could go on and on...But I would rather think of all the good memories I have of my friend.