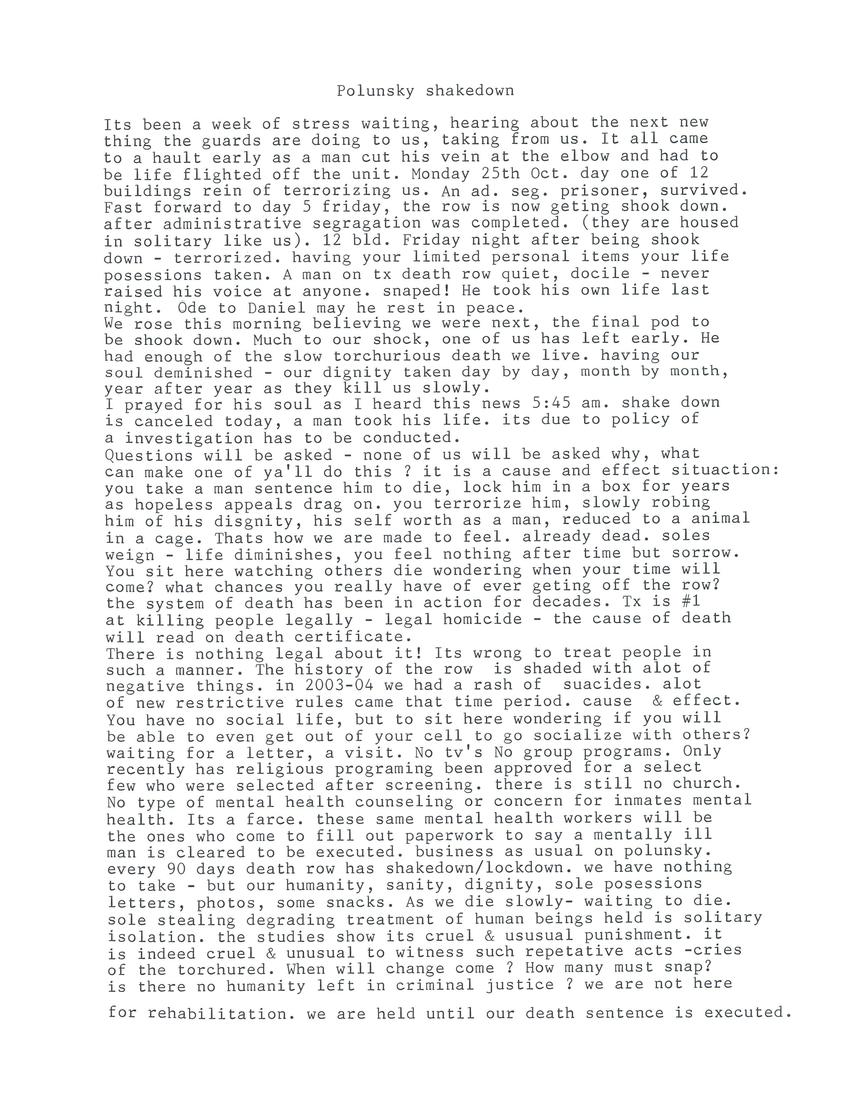 Its been a week of stress waiting, hearing about the next new thing the guards are doing to us, taking from us. It all came to a hault early as a man cut his vein at the elbow and had to be life flighted off the unit. Monday 25th. Oct. day one of 12 buildings rein of terrorizing us. An ad. seg. prisoner, survived. Fast forward to day 5 friday, the row is now getting shook down. after administrative segregation was completed. (they are housed in solitary like us). 12 bld. Friday night after being shook down - terrorized. having your limited personal items your life possession taken. A man on tx death row quiet, docile - never raised his voice at anyone. snaped! He took his own life last night. Ode to Daniel may he rest in peace.
We rose this morning believing we were next, the final pod to be shook down. Much to our shock, one of us has left early. He had enough of the slow torchurious death we live. having out soul diminished - our dignity taken day by day, month by month, year after year as they kill us slowly.
I prayed for his soul as I heard this news 5:45 am. shake down is canceled today, a man took his life. its due to policy of a investigation has to be conducted.
Questions will be asked - none of us will be asked why, what can make one of ya'll do this? it is a cause and effect situaction: you take a man sentence him to die, lock him in a box for years as hopeless appeals drag on. you terrorize him, slowly robing him of his dignity, his self worth as a man, reduced to a animal in a cage. Thats how we are made to feel. already dead. soles weign - life diminishes, you feel nothing after time but sorrow. You sit here watching others die wondering when your time will come? what chances you really have of ever getting off the row? the system of death has been in action for decades. Tx is #1 at killing people legally - legal homicide - the cause of death will read on death certificate.
There is nothing legal about it! Its wrong to treat people in such a manner. The history of the row is shaded with alot of negative things. in 2003-4 we had a rash of suacides. alot of new restrictive rules came that time period. cause and effect. You have no social life, but to sit here wondering if you will be able to even get out of your cell to go socialize with others? waiting for a letter, a visit. No tv's no group programs. Only recently has religious programing been approved for a selectfew who were selected after screening. there is still no church. No type of mental health counseling or concern for inmates mental health. Its a farce. these same mental health workers will be the ones who come to fill out paperwork to say a mentally ill man is cleared to be executed. business as usual on polunsky. every day 90 days death row has a shakedown/lockdown. we have nothing to take - but our humanity, sanity, dignity, sole posessions letters, photos, some snacks. As we die slowly - waiting to die. sole stealing degrading treatment of human beings held is solitary isolation. the studies show its cruel & unusual punishment. it is indeed cruel & unusual to witness such repetative acts -cries of the torchured. When will change come? How many must snap? is there no humanity left in criminal justice? we are not here for rehabilitation. we are held until our death sentence is executed.

Thanks for writing! I finished the transcription for your post. This is a beautiful writing of such an event. I was able to follow and feel what you were feeling. I hope you're doing well, stay safe.