About the Kyle Rittenhouse Case 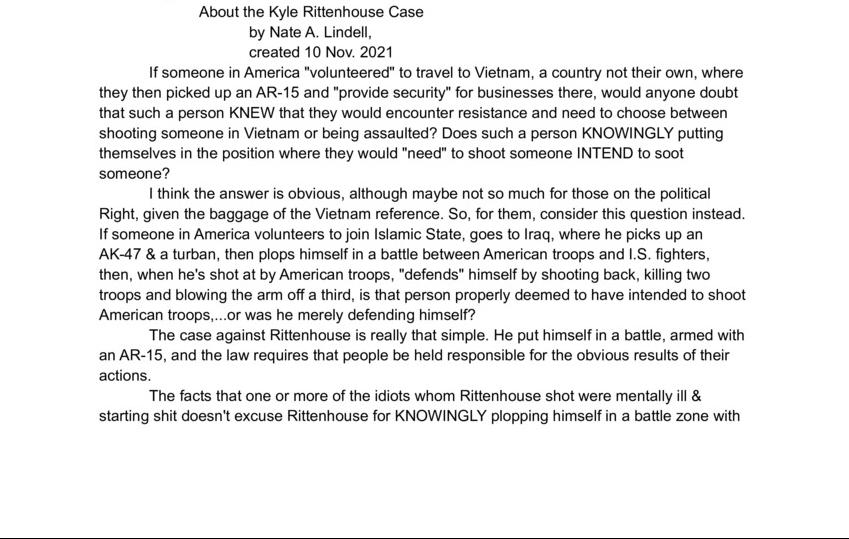 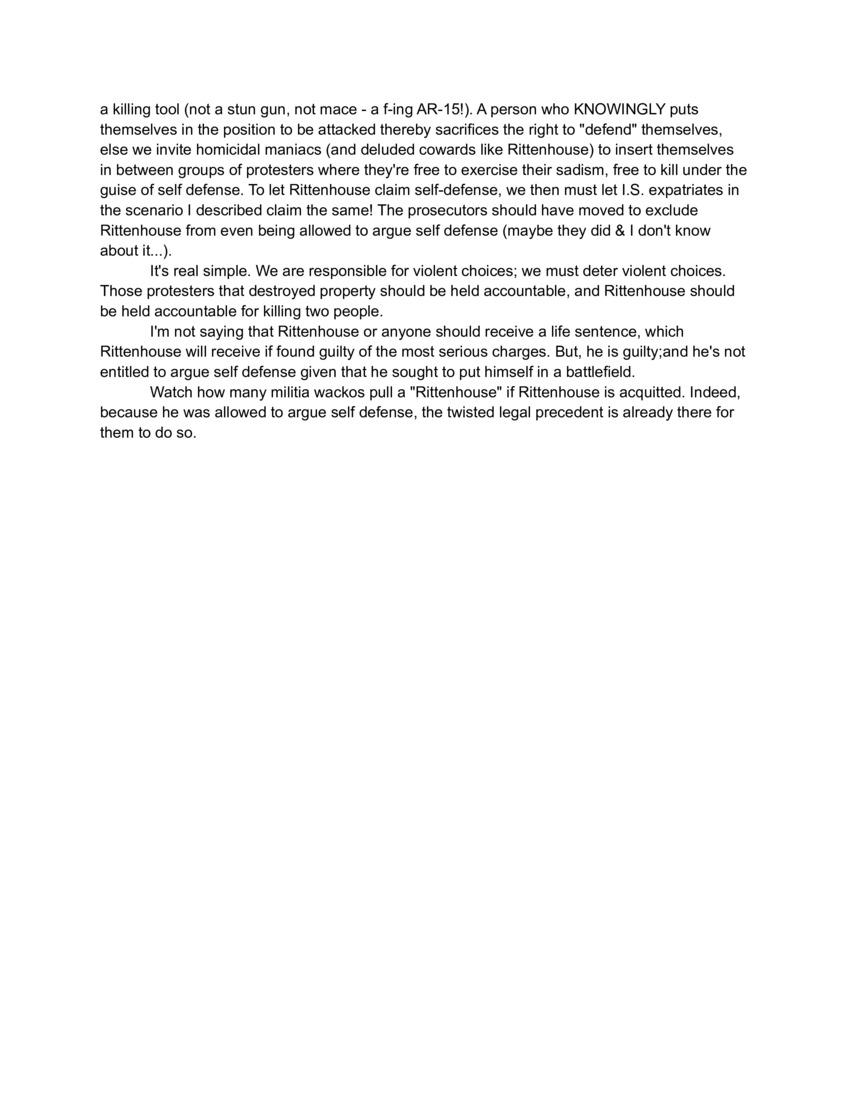 About the Kyle Rittenhouse Case
by Nate A. Lindell,
created 10 Nov. 2021
If someone in America "volunteered" to travel to Vietnam, a country not their own, where
they then picked up an AR-15 and "provide security" for businesses there, would anyone doubt
that such a person KNEW that they would encounter resistance and need to choose between
shooting someone in Vietnam or being assaulted? Does such a person KNOWINGLY putting
themselves in the position where they would "need" to shoot someone INTEND to soot
someone?
I think the answer is obvious, although maybe not so much for those on the political
Right, given the baggage of the Vietnam reference. So, for them, consider this question instead.
If someone in America volunteers to join Islamic State, goes to Iraq, where he picks up an
AK-47 & a turban, then plops himself in a battle between American troops and I.S. fighters,
then, when he's shot at by American troops, "defends" himself by shooting back, killing two
troops and blowing the arm off a third, is that person properly deemed to have intended to shoot
American troops,….or was he merely defending himself?
The case against Rittenhouse is really that simple. He put himself in a battle, armed with
an AR-15, and the law requires that people be held responsible for the obvious results of their
actions.
The facts that one or more of the idiots whom Rittenhouse shot were mentally ill &
starting shit doesn't excuse Rittenhouse for KNOWINGLY plopping himself in a battle zone with
a killing tool (not a stun gun, not mace - a f-ing AR-15!). A person who KNOWINGLY puts
themselves in the position to be attacked thereby sacrifices the right to "defend" themselves,
else we invite homicidal maniacs (and deluded cowards like Rittenhouse) to insert themselves
in between groups of protesters where they're free to exercise their sadism, free to kill under the
guise of self defense. To let Rittenhouse claim self-defense, we then must let I.S. expatriates in
the scenario I described claim the same! The prosecutors should have moved to exclude
Rittenhouse from even being allowed to argue self defense (maybe they did & I don't know
about it...).
It's real simple. We are responsible for violent choices; we must deter violent choices.
Those protesters that destroyed property should be held accountable, and Rittenhouse should
be held accountable for killing two people.
I'm not saying that Rittenhouse or anyone should receive a life sentence, which
Rittenhouse will receive if found guilty of the most serious charges. But, he is guilty;and he's not
entitled to argue self defense given that he sought to put himself in a battlefield.
Watch how many militia wackos pull a "Rittenhouse" if Rittenhouse is acquitted. Indeed,
because he was allowed to argue self defense, the twisted legal precedent is already there for
them to do so.