The Flordia Department of Corruption 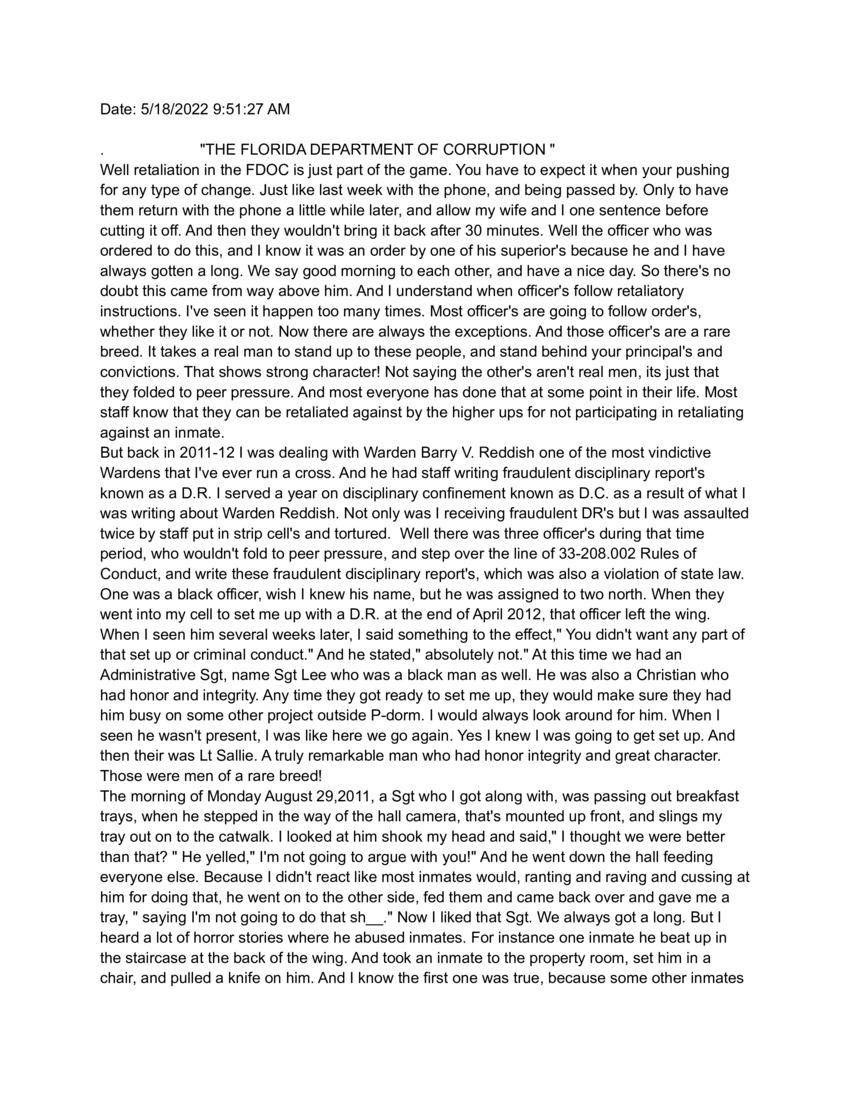 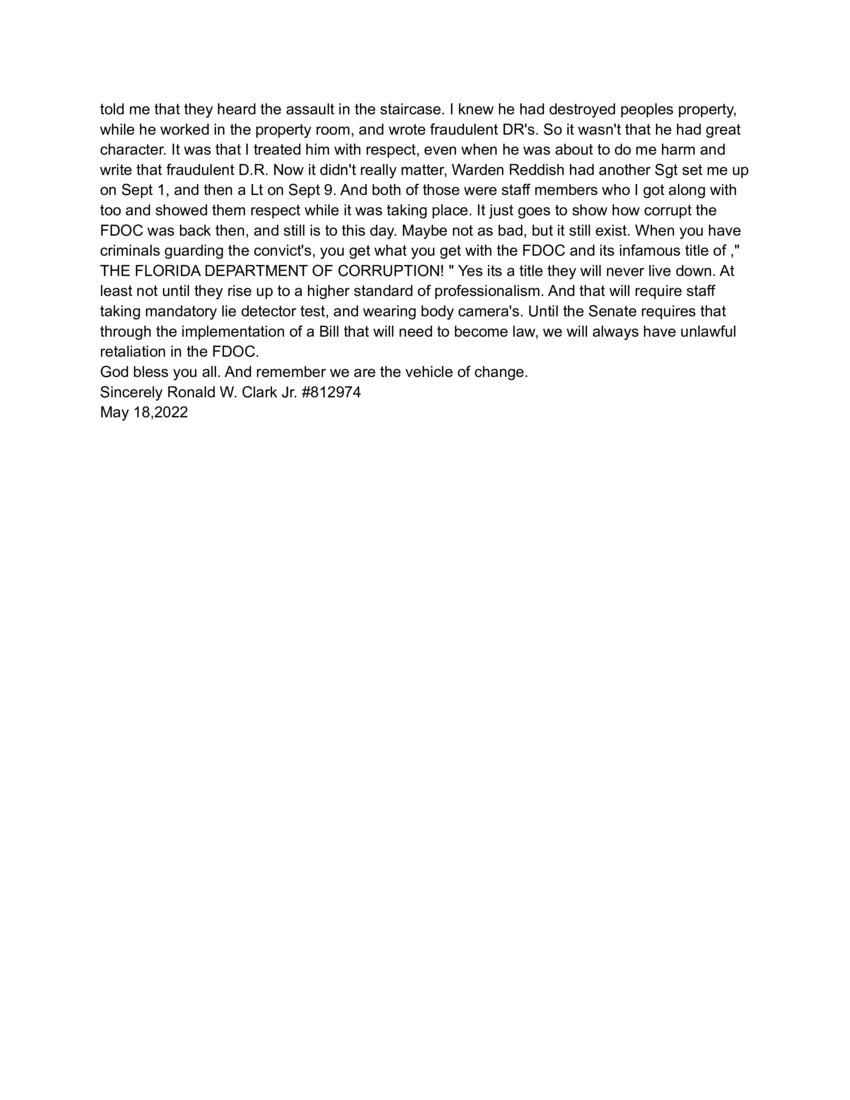 "THE FLORIDA DEPARTMENT OF CORRUPTION"

Well retaliation in the FDOC is just part of the game. You have to expect it when your pushing for any type of change. Just like last week with the phone, and being passed by. Only to have them return with the phone. a little while later, and allow my wife and I one sentence before cutting it off. And then they wouldn't bring it back after 30 minutes. Well the officer who was ordered to do this, and I know it was an order by one of his superior's because he and I have always gotten a long. We say good morning to each other, and have a nice day. So there's no doubt this came from way above him. And I understand when officer's follow retaliatory instructions. I've seen it happen too many times. Most officer's are going to follow order's, whether they like it or not. Now there are always exceptions. And those officer's are a rare breed. it takes a real man to stand up to these people, and stand behind your principal's and convictions. That shows strong character! Not saying the other's aren't real men, its just that they folded to peer pressure. And most everyone has done that at some point in their life. Most staff know that they can be retaliated against by the higher ups for not participating in retaliating against an inmate.

But back in 2011-12 I was dealing with Warden Barry V. Reddish one of the most vindictive Wardens that I've ever run a cross. And he had staff writing fraudulent disciplinary report's known as a D.R. I served a year on disciplinary confinement known as D.C. as a result of what I was writing about Warden Reddish. Not only was I receiving fraudulent DR's but I was assaulted twice by staff put in strip cells and tortured. Well there was three officer's during that time period, who wouldn't fold to peer pressure, and step over the line of the 33-208.002 Rules of Conduct, and write these fraudulent disciplinary reports, which was also a violation of state law. One was a black officer, I wish I knew his name, but he was assigned to two north. When they went into my cell to set me up with a D.R. at the end of April 2012, that officer left the wing. When I seen him several weeks later, I said something to the effect, "You didn't want any part of that set up or criminal conduct." And he stated, "absolutely not," At this time we had an Administrative Sgt., name Sgt Lee who was a black man as well. He was also a Christian who had honor and integrity. Any time they got ready to set me up, they would make sure they had him busy on some other project outside P-dorm. I would always look around for him. When I seen he wasn't present, I was like here we go again. Yes I knew I was going to get set up. And then their was Lt Sallie. A truly remarkable man who had honor integrity and great character. Those were men of a rare breed!

The morning of Monday August 29,2011, a Sgt who I got along with, was passing out breakfast trays, when he stepped in the way of the hall camera, that's mounter up front, and slings my tray out on to the catwalk. I looked at him and shook my head and said, "I thought we were better than that?" He yelled, "I'm not going to argue with you!" And he went down the fall feeding everyone else. Because I didn't react like most inmates would, ranting and raving and cussing at him for doing that, he went on to the other side, fed them and came back over and gave me a tray, " saying I'm not going to do that sh_." Now I liked that Sgt. We always got a long. But I heard a lot of horror stories where he abused inmates. For instance one inmate he beat up in the staircase at the back of the wing. And took and inmate to the property room, set him in a chair, and pulled a knife on him. And I know the first one was true, because some other inmates told me they heard the assault in the staircase. I knew he had destroyed peoples property, while he worked in the property room and wrote fraudulent DRs. So it wasn't that he had great character. It was that I treated him with respect, even when he was about to do me harm and write that fraudulent DR. Now it didn't really matter, Warden Reddish had another Sgt set me up on Sept 1, and then a Lt on Sept 9. And both those were staff members who I got along with too and showed them respect while it was taking place. It just goes to show how corrupt the FDOC was back then and still is to this day. Maybe not as bad, but it still exists. When you have criminals guarding the convict's, you get what you get with the FDOC and its infamous title of ,"THE FLORIDA DEPARTMENT OF CORRUPTION!" Yes its a title they will never live down. At least not until they rise up to a higher standard of professionalism. And that will require staff taking mandatory lie detector test, and wearing body camera's. Until the Senate requires that through the implementation of a Bill that will need to become law, we will always have unlawful retaliation in the FDOC.
God bless you all. And remember we are the vehicle of change.
Sincerely, Ronald W. Clark Jr. #812974
May 18, 2022