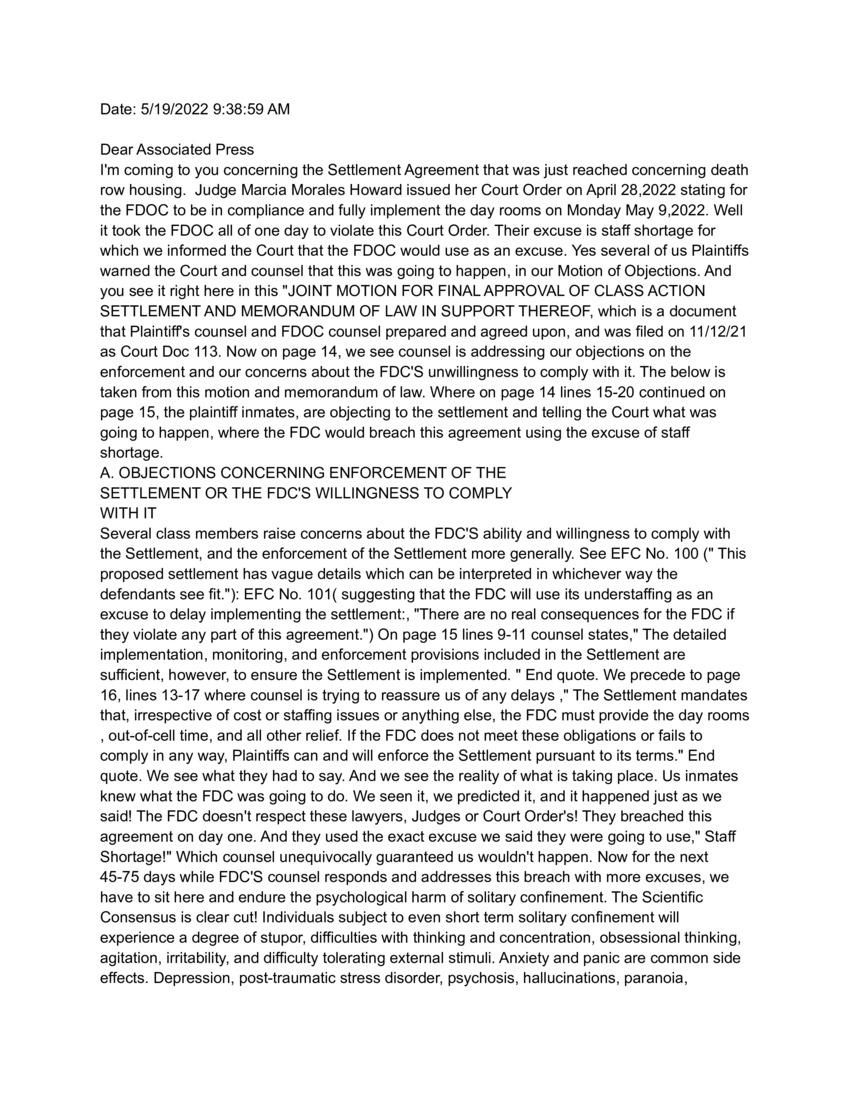 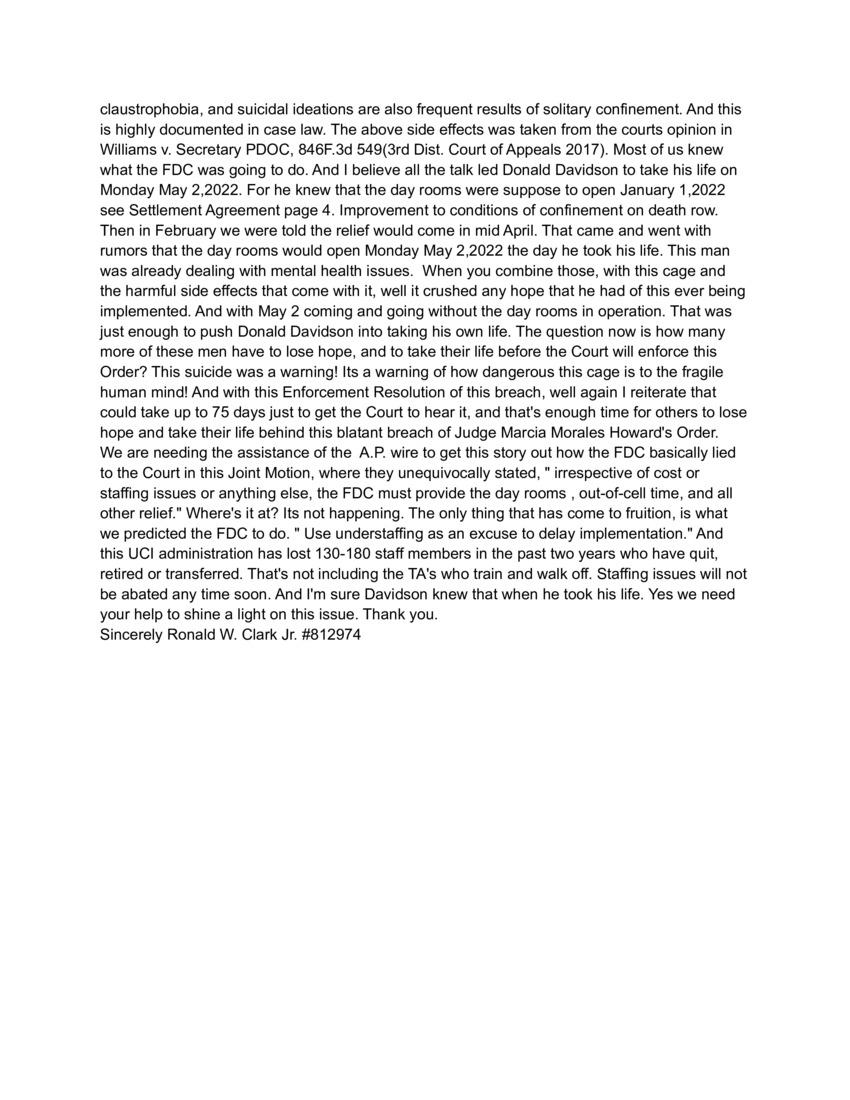 I'm coming to you concerning the Settlement Agreement that was just reached concerning death row housing. Judge Marcia Morales Howard issued her Court Order on April 28, 2022 stating for the FDOC to be in compliance and fully implement the day rooms on Monday May 9, 2022. Well it took the FDOC all of one day to violate this Court Order. Their excuse is staff shortage for which we informed the Court that the FDC would use as an excuse. Yes, several of us Plaintiffs warned the Court and counsel that this was going to happen, in our Motion of Objections. And you see it right here in this "JOINT MOTION FOR FINAL APPROVAL OF CLASS ACTION SETTLEMENT AND MEMORANDUM OF LAW IN SUPPORT THEREOF, which is a document of Plaintiff's counsel and the FDOC counsel prepared and agreed upon, and was filed on 11/12/21 as Court Doc 113. Now on page 14, we see counsel is addressing our objections on the enforcement and our concerns about the FDC's unwillingness to comply with it. The below is taken from this motion and memorandum of law. Where on page 14 lines 15-20 continued on page 15, the plaintiff inmates, are objecting to the settlement and telling the Court what was going to happen where the FDC would breach the agreement using the excuse of staff shortage.

A. OBJECTIONS CONCERNING ENFORCEMENT OF THE SETTLEMENT OR THE FDC'S WILLINGNESS TO COMPLY WITH IT.

Several class members raise concerns about the FDC's ability and willingness to comply with the Settlement and the enforcement of the Settlement more generally. See EFC No. 100 ("This proposed settlement has vague details which can be interpreted in whichever way the defendants see fit."): EFC No. 101 (suggesting that the FDC will use its understaffing as an excuse to delay implementing the settlement:, "There are no real consequences for the FDC if they violate any part of this agreement.") On page 15 lines 9-11 counsel states, "The detailed implementation, monitoring, and enforcement provisions included in the Settlement are sufficient, however, to ensure the Settlement is implemented." End quote. We precede to page 16, lines 13-17 where counsel is trying to reassure us of any delays, "The Settlement mandates that, irrespective of cost or staffing issues or anything else, the FDC must provide the day rooms, out-of-cell-time, and all other relief. If the FDC does not meet these obligations or fails to comply in any way, Plaintiffs can and will enforce the Settlement pursuant to its terms." End quote. We see what they had to say. And we see the reality of what is taking place. Us inmates knew what the FDC was going to do. We seen it, we predicted it, and it happened just as we said! The FDC doesn't respect these lawyers, Judges or Court Order's! They breached this agreement on day one. And they used the exact excuse we said they were going to use, "Staff Shortage!" Which counsel unequivocally guaranteed us wouldn't happen. Now for the next 45-75 days while FDC's counsel responds and addresses this breach with more excuses, we have to sit here and endure the psychological harm of solitary confinement. The Scientific Consensus is clear cut! Individuals subject to even short term solitary confinement will experience a degree of stupor, difficulties with thinking and concentration, obsessional thinking, agitation, irritability, and difficulty tolerating external stimuli. Anxiety and panic are common side effects. Depression, post-traumatic stress disorder, psychosis, hallucinations, paranoia, claustrophobia, and suicidal ideations are also frequent results of solitary confinement. And this is highly documented in case law. The above side effects was taken from the courts opinion in Williams v Secretary PDOC, 846F.3d (3rd Dist. Court of Appeals 2017). Most of us knew what the FDC was going to do. And I believe all the talk led Donald Davidson to take his life on Monday May 2, 2022. For he knew that the day rooms were supposed to open January 1, 2022 see Settlement Agreement page 4. Improvement to conditions of confinement on death row. Then in February we were told the relief would come in mid April. That came and went with rumours that the day rooms would open Monday May 2, 2022 the day he took his life. The man was already dealing with mental health issues. When you combine those, with this cage and the harmful side effects that come with it, well it crushed any hope he had of this ever being implemented. And with May 2 coming and going without the day rooms in operation. That was just enough to push Donald Davidson into taking his own life. The question now is how many more of these men have to lose hope, and to take their life before the Court will enforce this Order? This suicide was a warning! It's a warning of how dangerous this cage is to the fragile human mind! And with the Enforcement Resolution of this breach, well again I reiterate that could take up to 75 days just to get the Court to hear it, and that's enough time for others to lose hope and take their life behind this blatant breach of Judge Marcia Morales Howard's Order. We are needing the assistance of the AP wire to get this story out how the FDC basically lied to the Court in this Joint Motion, where they unequivocally stated "irrespective of cost or staffing issues or anything else, the FDC must provide the day rooms, out-of-cell time, and all other relief." Where is it? It's not happening. The only thing that has come to fruition is what we predicted the FDC to do. "Use understaffing as an excuse to delay implementation." And this UCI administration has lost 130-189 staff members in the past two years who have quit, retired or transferred. That's not including the TA's who train and walk off. Staffing issues will not be abated any time soon. And I'm sure Davidson knew that when he took his life. Yes we need your help to shine a light on this issue. Thank you.