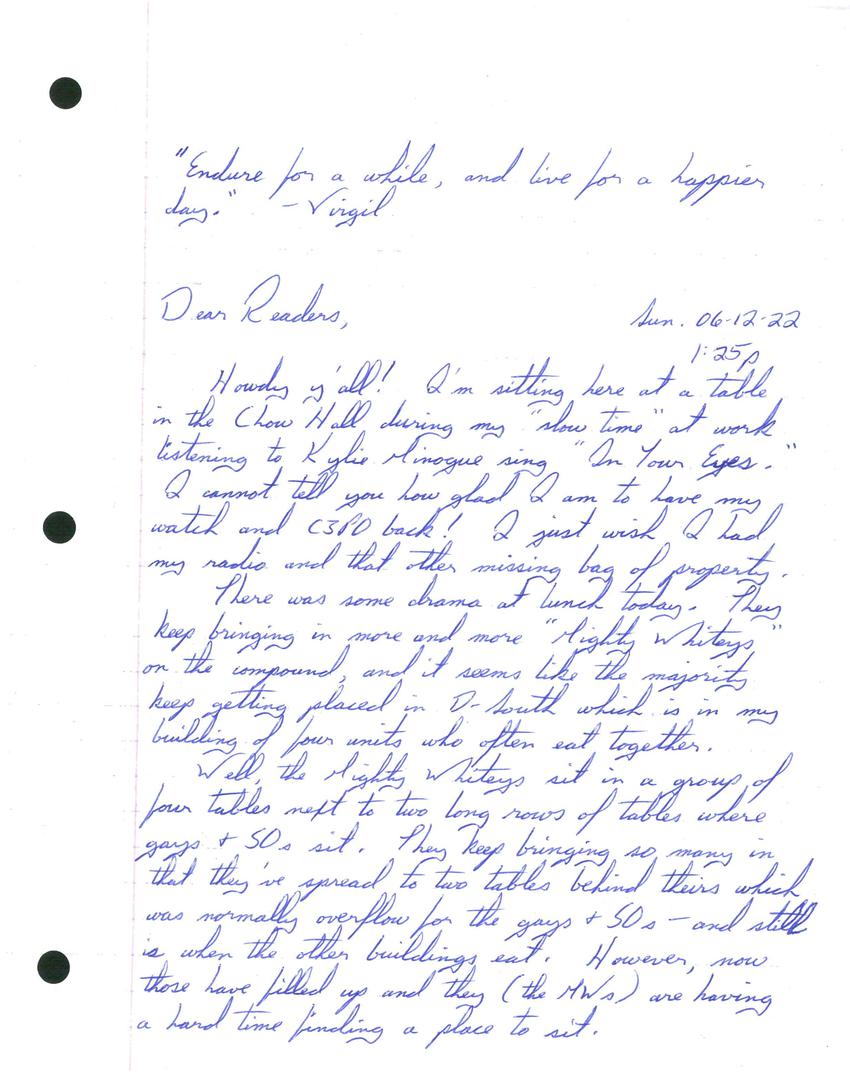 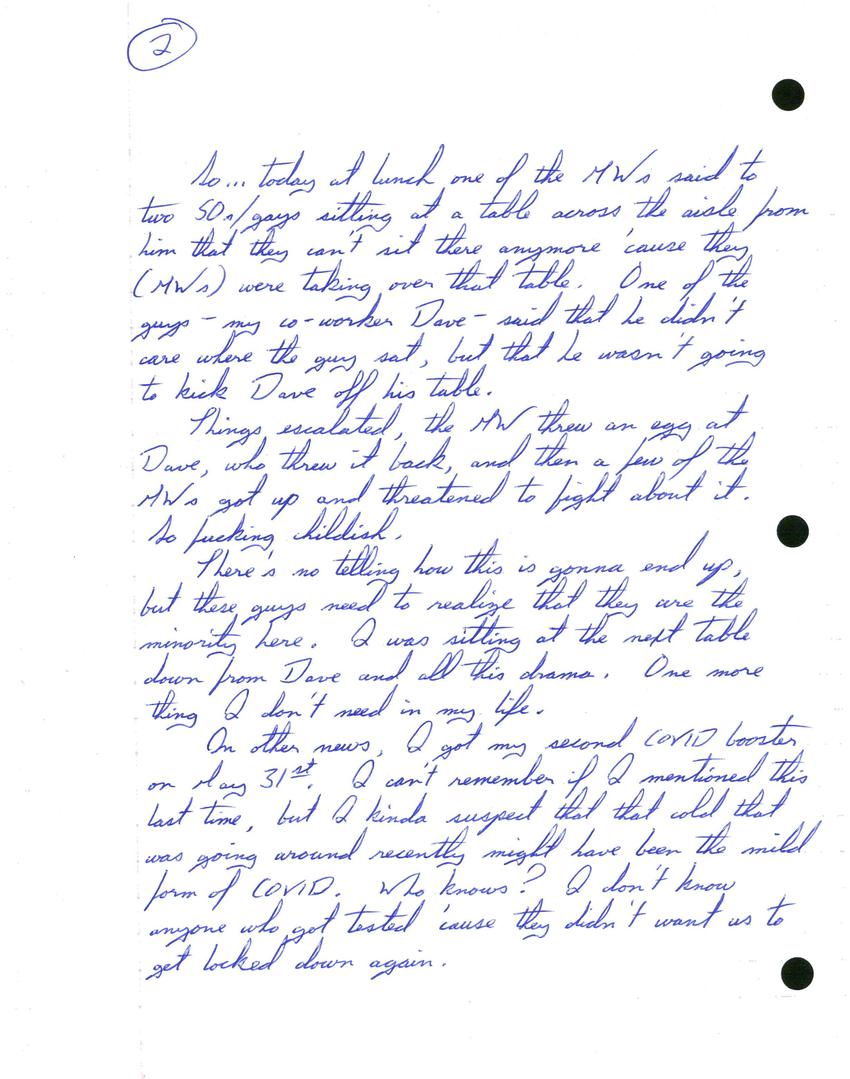 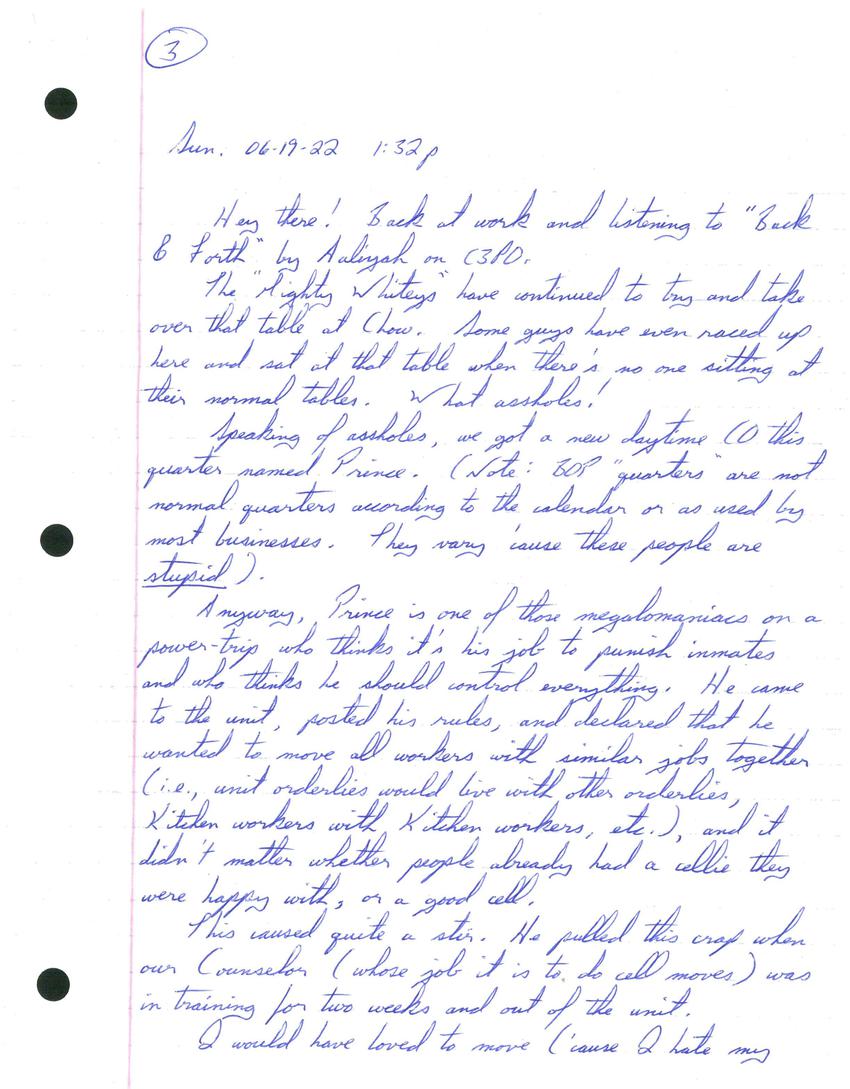 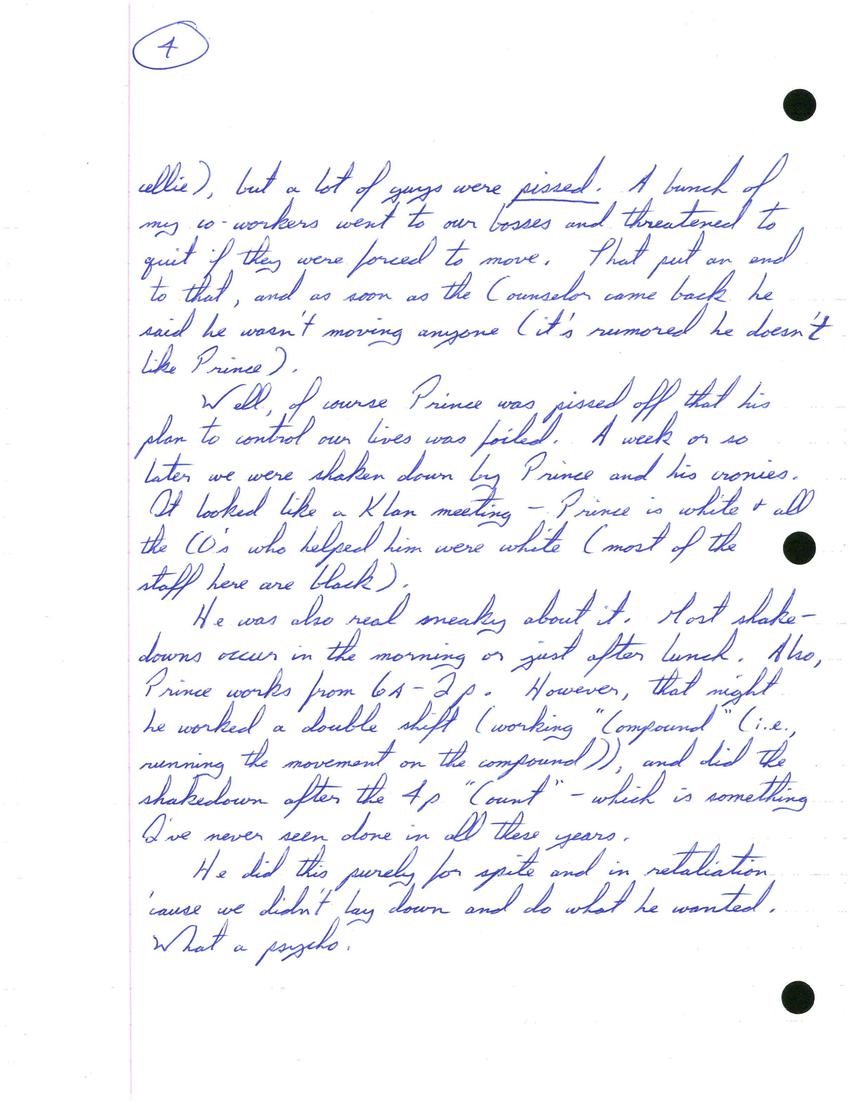 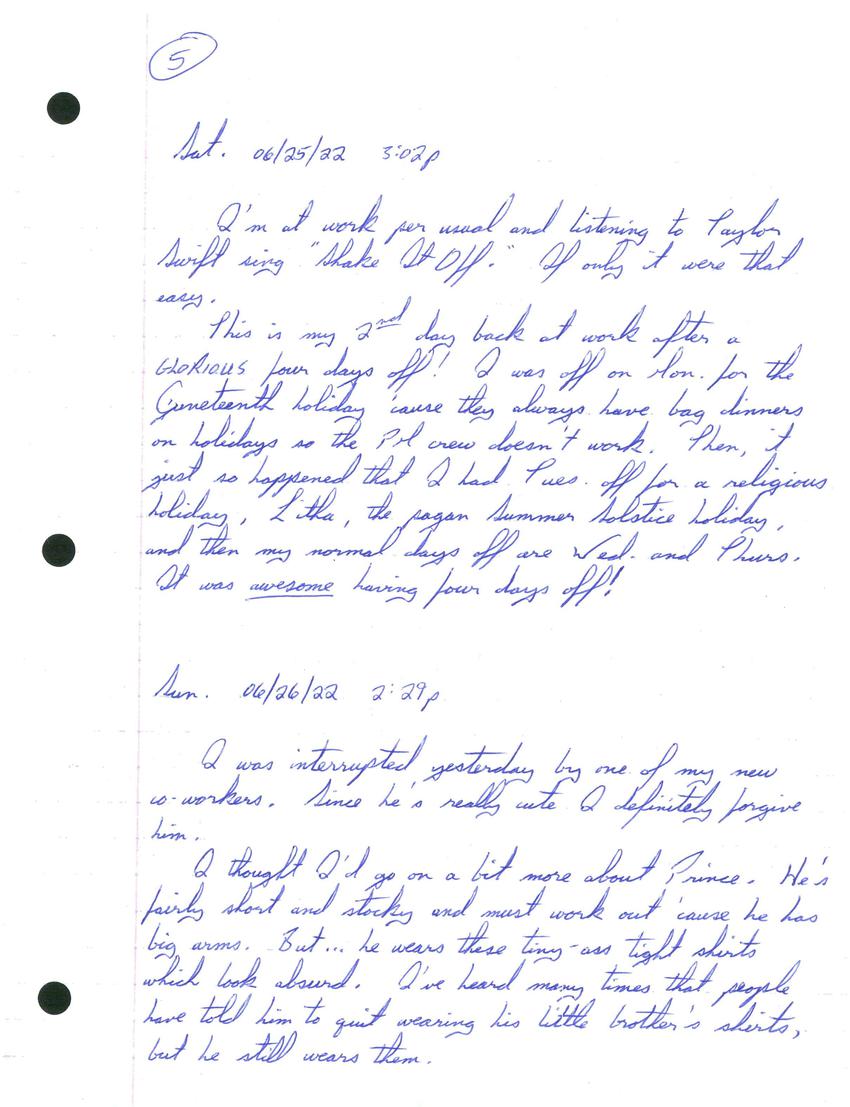 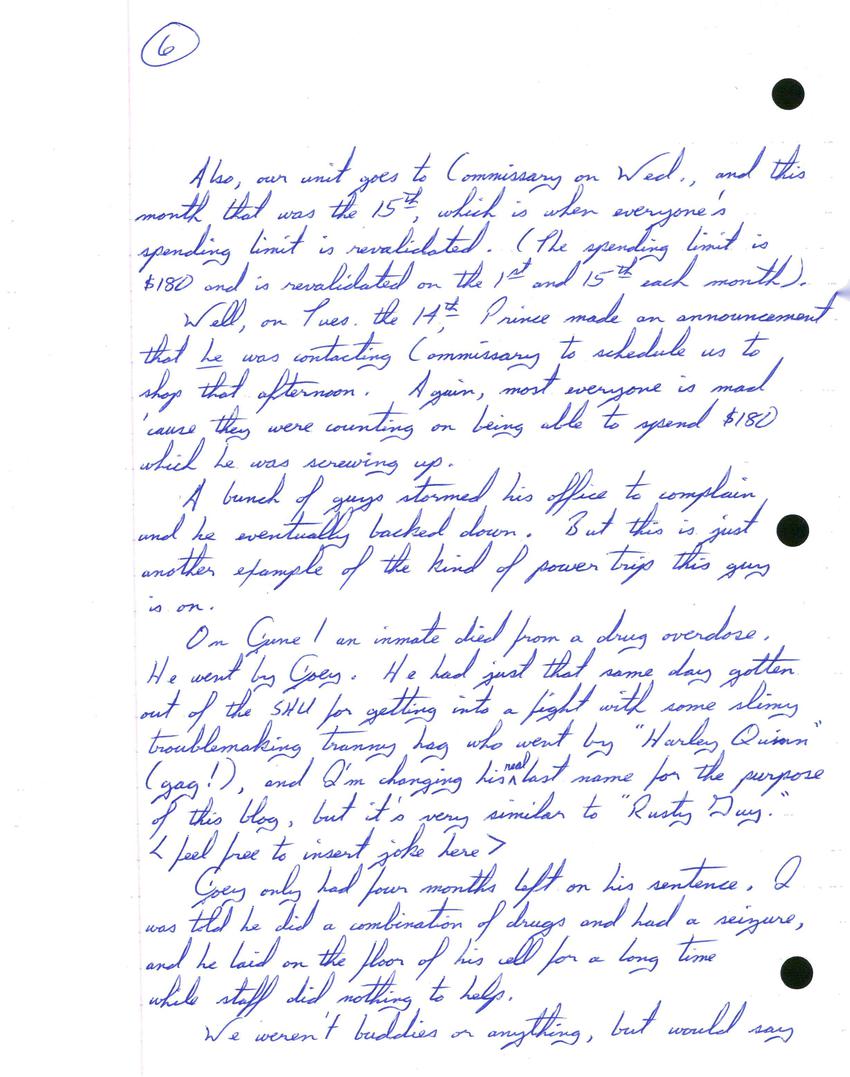 "Endure for a while, and live for a happier day." - Virgil

Howdy y'all! I'm sitting here at a table in the Chow Hall during my "slow time" at work listening to Kylie Minogue sing "In Your Eyes." I cannot tell you how glad I am to have my watch and C3P0 back! I just wish I had my radio and that other missing bag of property.

There was some drama at lunch today. They keep bringing in more and more "Mighty Whiteys" on the compound, and it seems like the majority keep getting placed in D-South which is in my building of four units who often eat together.

Well, the Mighty Whiteys sit in a group of four tables next to two long rows of tables where gays + SOs sit. They keep bringing so many in that they've spread to two tables behind theirs which was normally overflow for the gays + SOs - and still is when the other buildings eat. However, now those have filled up and they (the MWs) are having a hard time finding a place to sit.

So...today at lunch one of the MW said to two SOs/gays sitting at a table across the aisle from him that they can't sit there anymore 'cause they (MWs) were taking over that table. One of the guys - my co-worker Dave - said that he didn't care where the guy sat, but that he wasn't going to kick Dave off his table.

Things escalated, the MW threw an egg at Dave, who threw it back, and then a few of the MWs got up and threatened to fight about it. So fucking childish.

There's no telling how this is gonna end up, but these guys need to realize that they are the minority here. I was sitting at the next table down from Dave and all this drama. One more thing I don't need in my life.

In other news, I got my second COVID booster on May 31st. I can't remember if I mentioned this last time, but I kinda suspect that that cold that was going around recently might have been the mild form of COVID. Who knows? I don't know anyone who got tested 'cause they didn't want us to get locked down again.

Hey there! Back at work and listening to "Back & Forth" by Aaliyah on C3P0.

The "Mighty Whiteys" have continued to try and take over that table at Chow. Some guys have even raced up here and sat at that table when there's no one sitting at their normal tables. What assholes!

Speaking of assholes, we got a new daytime CO this quarter named Prince. (Note: Bop "quarters" are not normal quarters according to the calendar or as used by most businesses. They vary 'cause these people are stupid [underlined]).

Anyway, Prince is one of those megalomaniacs on a power-trip who thinks it's his job to punish inmates and who thinks he should control everything. He came to the unit, posted his rules, and declared that he wanted to move all workers with similar jobs together (i.e., unit orderlies would live with other orderlies, kitchen workers with kitchen workers, etc.), and it didn't matter whether people already had a cellie they were happy with, or a good cell.

This caused quite a stir. He pulled this crap when our Counselor (whose job it is to do cell moves) was in training for two weeks and out of the unit.

I would have loved to move ('cause I hate my cellie), but a lot of guys were pissed [underlined]. A bunch of my co-workers went to our bosses and threatened to quit if they were forced to move. That put an end to that, and as soon as the Counselor came back he said he wasn't moving anyone (it's rumored he doesn't like Prince).

Well, of course Prince was pissed off that his plan to control our lives was foiled. A week or so later we were shaken down by Prince and his cronies. It looked like a Klan meeting - Prince is white + all the CO's who helped him were white (most of the staff here are black).

He was also real sneaky about it. Most shakedowns occur in the morning or just after lunch. Also, Prince works from 6A-2p. However, that night he worked a double shift (working "Compound" (i.e., running the movement on the compound)), and did the shakedown after the 4p "Count" - which is something I've never seen done in all these years.

He did this purely for spite and in retaliation 'cause we didn't lay down and do what he wanted. What a psycho.

I'm at work per usual and listening to Taylor swift sing "Shake it Off." If only it were that easy.

This is my 2nd day back at work after a GLORIOUS four days off! I was off on Mon. for the Juneteenth holiday 'cause they always have bag dinners on holidays so the Pit crew doesn't work. Then, it just so happened that I had Tues. off for a religious holiday, Litha, the pagan Summer Solstice holiday, and then my normal days off are Wed. and Thurs. It was awesome [underlined] having four days off!

I was interrupted yesterday by one of my new co-workers. Since he's really cute I definitely forgive him.

I thought I'd go a bit more about Prince. He's fairly short and stocky and must work out 'cause he has big arms. But...he wears these tiny-ass tight shirts which look absurd. I've heard many times that people have told him to quit wearing his little brother's shirts, but he still wears them.

Well, on Tues. the 14th, Prince made an announcement that he [underlined] was contacting Commissary to schedule us to shop that afternoon. Again, most everyone is mad 'cause they were counting on being able to spend $180 which he was screwing up.

A bunch of guys stormed his office to complain and he eventually backed down. But this is just another example of the kind of power trip this guy is on.

On June 1 an inmate died from a drug overdose. He went by Joey. He had just that same day gotten out of the SHU for getting into a fight with some slimy troublemaking tranny hag who went by "Harley Quinn" (gag!), and I'm changing his real last name for the purpose of this blog, but it's very similar to "Rusty Guy." <feel free to insert joke here>

Joey only had four months left on his sentence. I was told he did a combination of drugs and had a seizure, and he laid on the floor of his cell for a long time while staff did nothing to help.

We weren't buddies or anything, but would say "hi" in passing. It's so sad that he died.

Just after he died, on the 3rd, I was told that two more guys "fell out" on "Deuce" (K2), and they locked the compound down that night. They fed each unit one at a time at Chow that night and it took FOREVER to get through work. We didn't get back to the unit until 9p. It was an awful night to be working.

Hey y'all! It's a hot Virginia summer day + I'm listening to "Something In Common" by Bobby Brown and Whitney Houston as I sit here in the Kitchen.

Some little cockroach in here who recently was made "Number 2" after a recent shake-up is getting on a bitch's last nerve and I may have to stop.

My boss lady was naggin' on me after I came in from the library today about missing work to go there. She wants to put me on part time - which is fine with me.

(I did get interrupted, but it was by the new cute guy)

As I was sayin'...fine with me except I've enjoyed getting the higher pay (even though it's not much), and I know part-time would cut that drastically.

I pointed out that I'm only missing three hours per week (which happens to be a slow time at work), and I think she's gonna keep things as they are for now. I sure hope so, I also signed my paysheet during that short break + I'm pretty sure it said $45 - which is the most I've made in a month.

I suppose I should end this here and get this in the mail since it's been a while. So...until next time, I wish you...