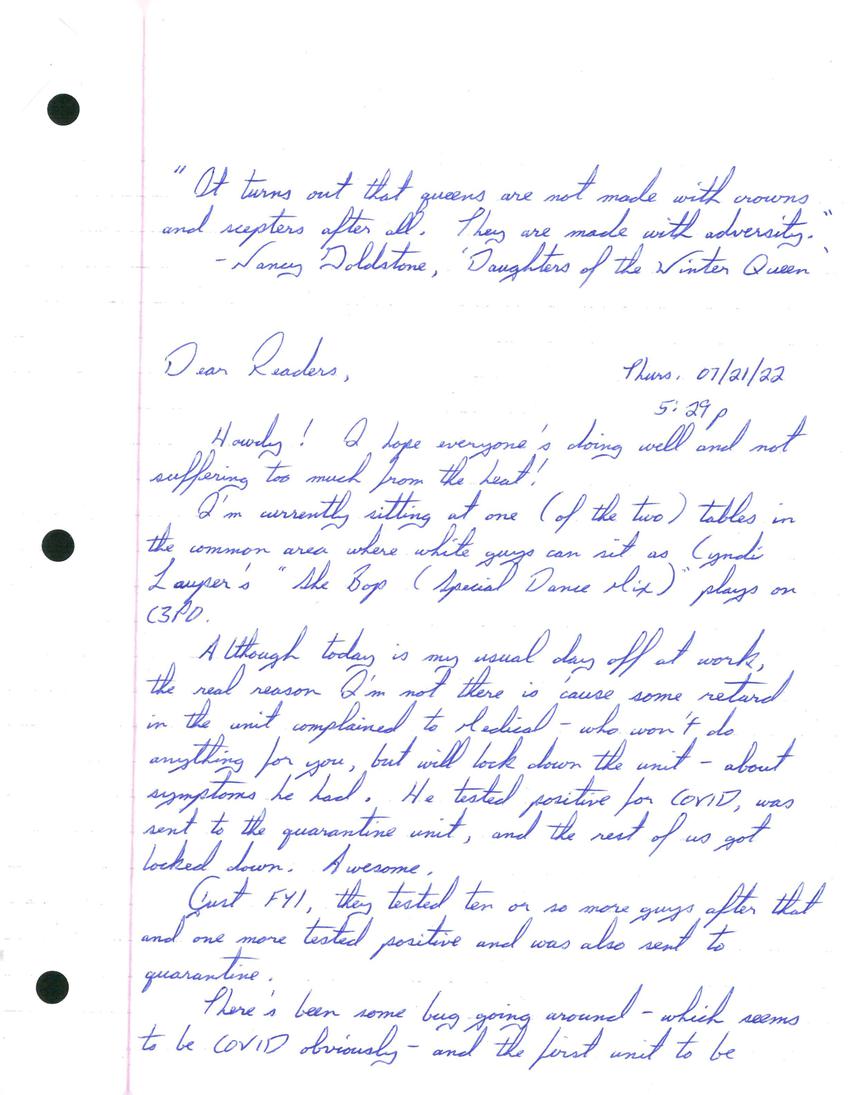 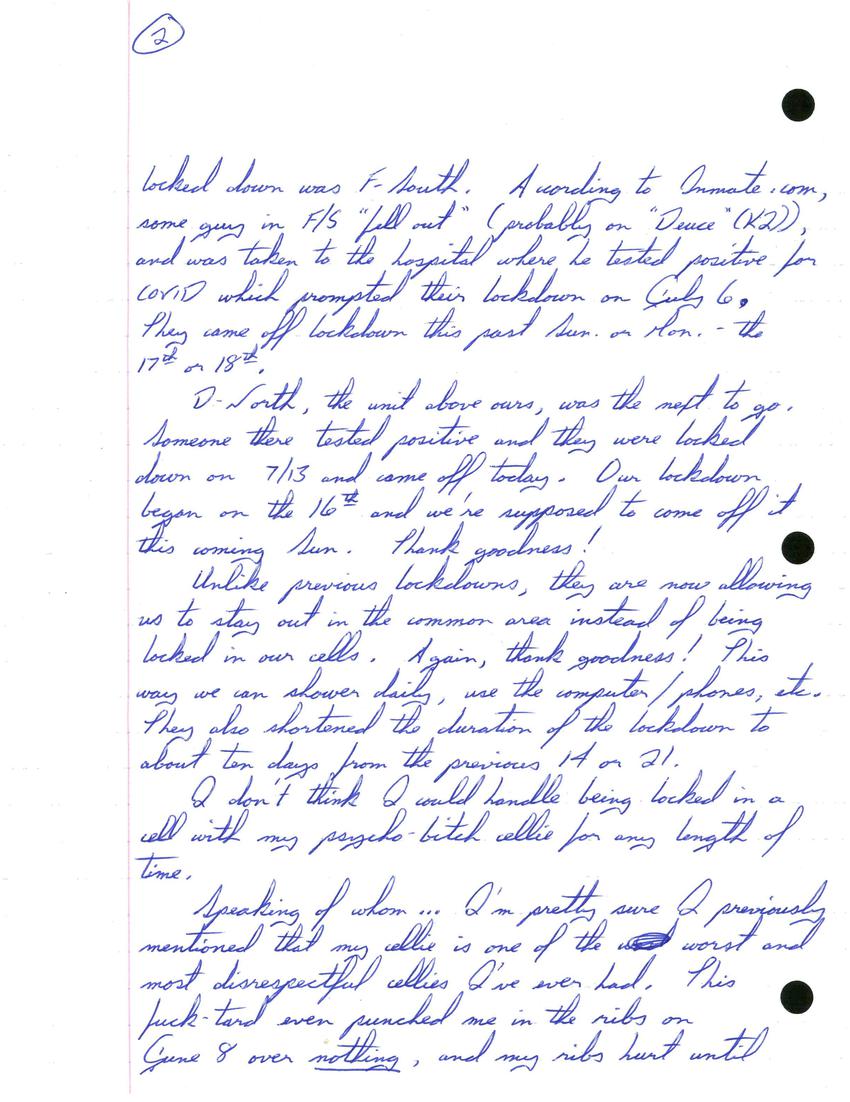 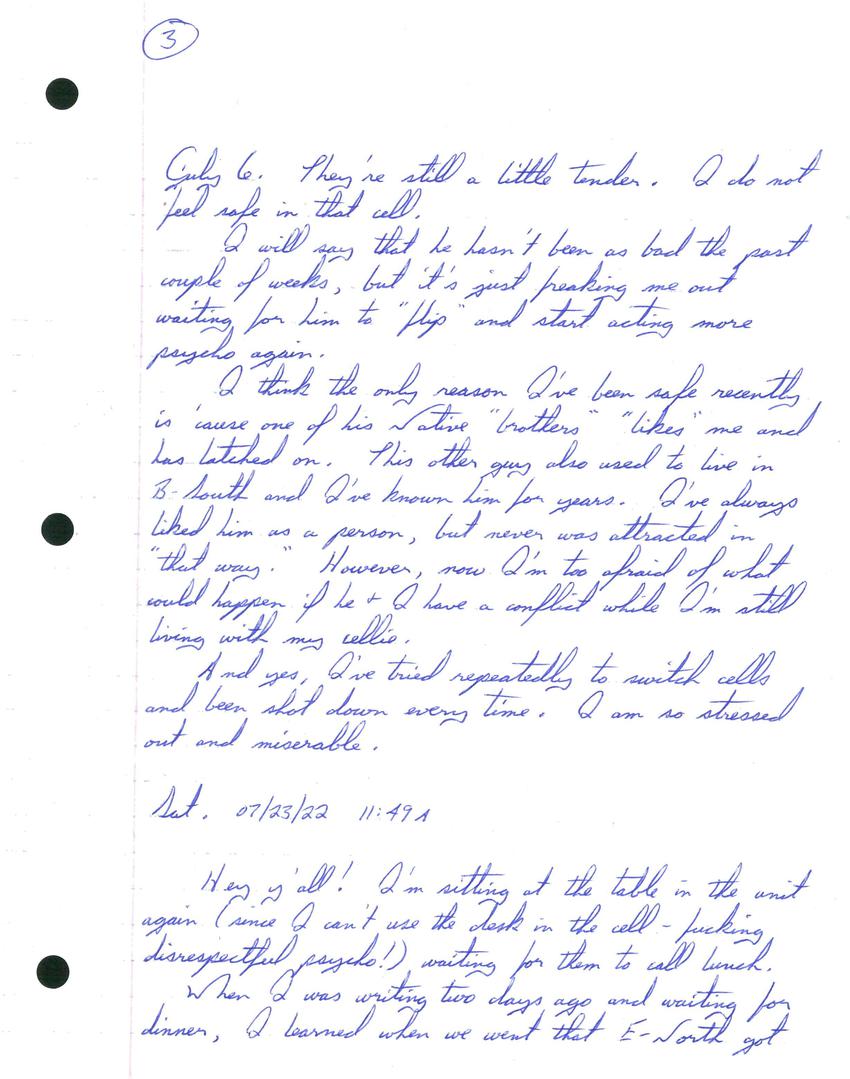 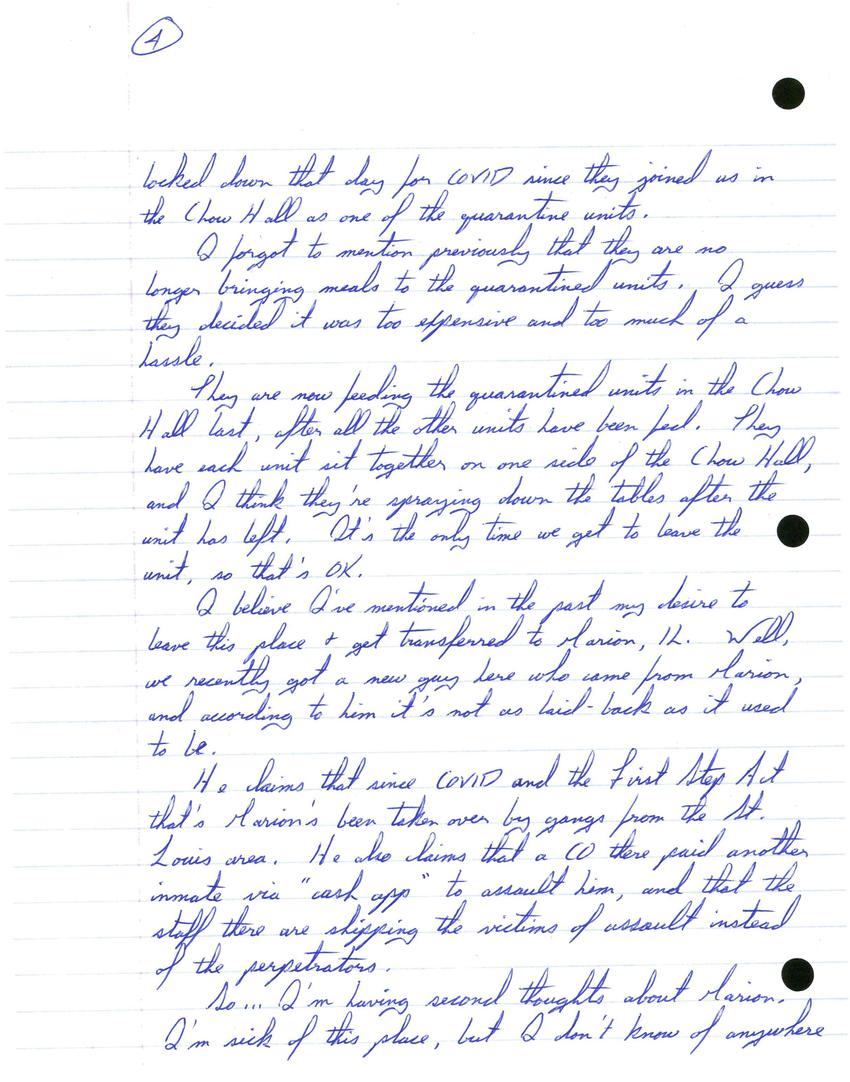 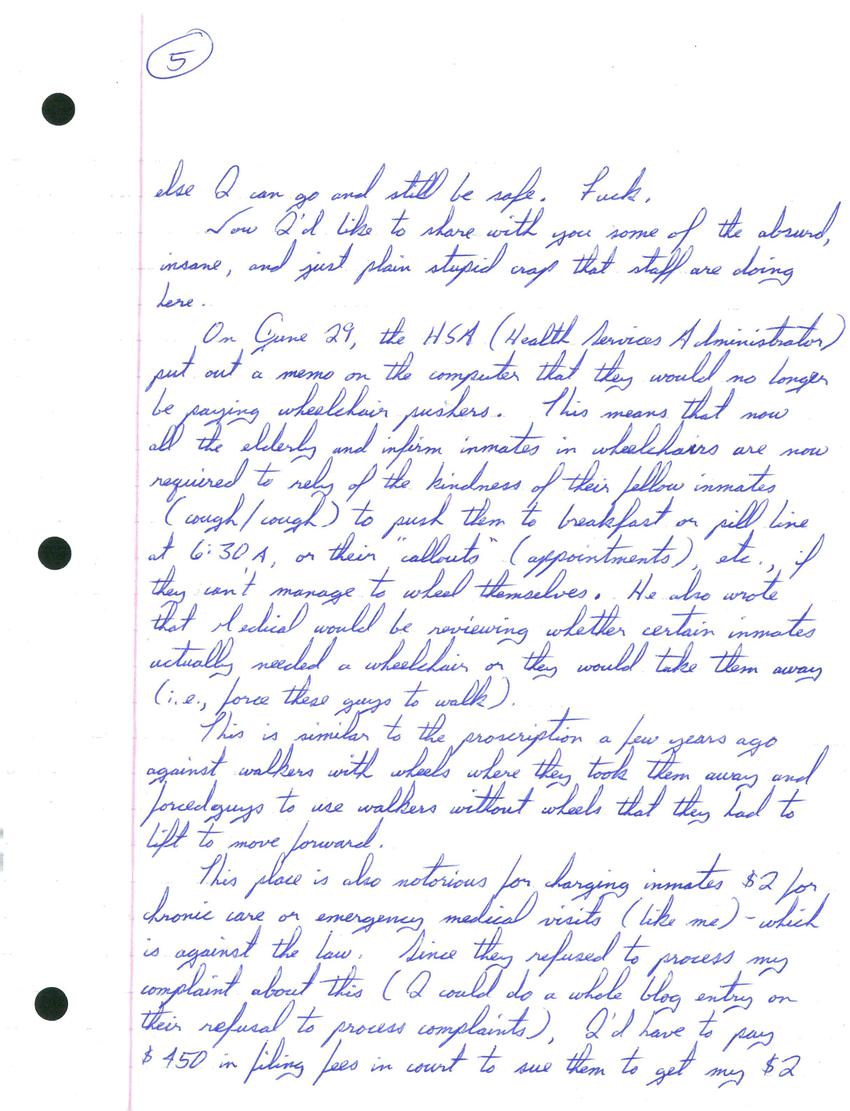 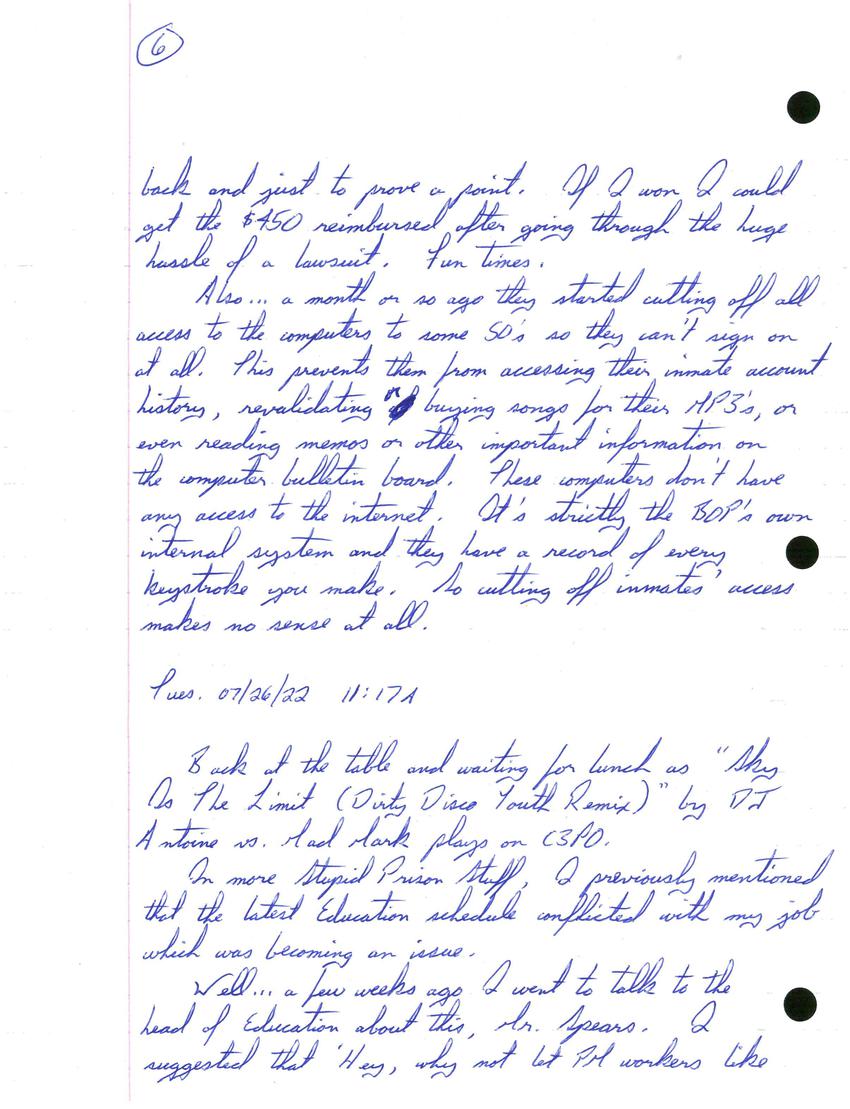 "It turns out that queens are not made with crowns and scepters after all. They are made with adversity."
- Nancy Goldstone, 'Daughters of the Winter Queen'

Howdy! I hope everyone's doing well and not suffering too much from the heat!

I'm currently sitting at one (of the two) tables in the common area where white guys can sit as Cyndi Lauper's "She Bop (Special Dance Mix)" plays on C3P0.

Although today is my usual day off at work, the real reason I'm not there is 'cause some retard in the unit complained to Medical - who won't do anything for you, but will lock down the unit - about symptoms he had. He tested positive for COVID, was sent to the quarantine unit, and the rest of us got locked down. Awesome.

Just FYI, they tested ten or so more guys after that and one more tested positive and was also sent to quarantine.

There's been some bug going around - which seems to be COVID obviously - and the first unit to be locked down was F-South. According to Inmate.com, some guy in F/S "fell out" (probably on "Deuce" (K2)), and was taken to the hospital where he tested positive for COVID which prompted this lockdown on July 6. They came off lockdown this past Sun. or Mon. - the 17th or 18th.

D-North, the unit above ours, was the next to go. Someone there tested positive and they were locked down on 7/13 and came off today. Our lockdown began on the 16th and we're supposed to come off it this coming Sun. Thank goodness!

Unlike previous lockdowns, they are now allowing us to stay out in the common area instead of being locked in our cells. Again, thank goodness! This way we can shower daily, use the computer/phones, etc. They also shortened the duration of the lockdown to about ten days from the previous 14 or 21.

I don't think I would handle being locked in a cell with my psycho-bitch cellie for any length of time.

Speaking of whom...I'm pretty sure I previously mentioned that my cellie is one of the worst and most disrespectful cellies I've ever had. This fuck-tard even punched me in the ribs on June 8 over nothing [underlined], and my ribs hurt until July 6. They're still a little tender. I do not feel safe in that cell.

I will say that he hasn't been as bad the past couple of weeks, but it's just freaking me out waiting for him to "flip" and start acting more psycho again.

I think the only reason I've been safe recently is 'cause one of his Native "brothers" "likes" me and has latched on. This other guy also used to live in B-South and I've known him for years. i've always liked him as a person, but never was attracted in "that way." However, now I'm too afraid of what could happen if he + I have a conflict while I'm still living with my cellie.

And yes, I've tried repeatedly to switch cells and been shot down every time. I am so stressed out and miserable.

Hey y'all! I'm sitting at the table in the unit again (since I can't use the desk in the cell - fucking disrespectful psycho!) waiting for them to call lunch.

When I was writing two days ago and waiting for dinner, I learned when we went that E-North got locked down that day for COVID since they joined us in the Chow Hall as one of the quarantine units.

I forgot to mention previously that they are no longer bringing meals to the quarantined units. I guess they decided it was too expensive and too much of a hassle.

They are now feeding the quarantined units in the Chow Hall last, after all the other units have been fed. They have each unit sit together on one side of the Chow Hall, and I think they're spraying down the tables after the unit has left. it's the only time we get to leave the unit, so that's OK.

I believe I've mentioned in the past my desire to leave this place + get transferred to Marion, IL. Well, we recently got a new guy here who came from Marion, and according to him it's not as laid-back as it used to be.

He claims that since COVID and the First Step Act that Marion's been taken over by gangs from the St. Louis area. He also claims that a CO there paid another inmate via "cash app" to assault him, and that the staff there are shipping the victims of assault instead of the perpetrators.

So...I'm having second thoughts about Marion. I'm sick of this place, but I don't know of anywhere else I can go and still be safe. Fuck.

Now I'd like to share with you some of the absurd, insane, and just plain stupid crap that staff are doing here.

On June 29, the HSA (Health Services Administration) put out a memo on the computer that they would no longer be paying wheelchair pushers. This means that now all the elderly and infirm inmates in wheelchairs are now required to rely on the kindness of their fellow inmates (cough/cough) to push them to breakfast or pill line at 6:30A, or their "callouts" (appointments), etc., if they can't manage to wheel themselves. He also wrote that medical would be reviewing whether certain inmates actually needed a wheelchair or they would take them away (i.e., force these guys to walk).

This is similar to the proscription a few years ago against walkers with wheels where they took them away and forced guys to use walkers without wheels that they had to lift to move forward.

This place is also notorious for charing inmates $2 for chronic care or emergency medical visits (like me) - which is against the law. Since they refused to process my complaint about this (I could do a whole blog entry on their resale to process complaints), I'd have to pay $450 in filing fees in court to sue them to get my $2 back and just to prove a point. If I won I could get the $450 reimbursed after going through the huge hassle of a lawsuit. Fun times.

Also...a month or so ago they started cutting off all access to the computers to some SO's so they can't sign on at all. This prevents them from accessing their inmate account history, revalidating or buying songs for their MP3's, or even reading memos or other important information on the computer bulletin board. These computers don't have any access to the internet. It's strictly the BOP's own internal system and they have a record of every keystroke you make. So cutting off inmates' access makes no sense at all.

Back at the table and waiting for lunch as "Sky Is the Limit (Dirty Dave Youth Remix)" by DJ Antoine vs. Mad Mark plays on C3P0.

In more Stupid Prison Stuff, I previously mentioned that the latest Education schedule conflicted with my job which was becoming an issue.

Well...a few weeks ago I went to talk to the head of Education about this, Mr. Spears. I suggested that 'Hey, why not let PM workers like myself come with one of the groups in the morning?' Mr. Spears said that that couldn't happen 'cause units aren't allowed to mix. I pointed out that since I work in Food Service I mix with all the units anyway. Besides that, there's the fact that at night all the units are allowed to go to the Library and mix anyway. Still no.

You must not use common sense when working for the BOP.

Also...an inmate named Crunk used to live in this unit and his cellie was (is) psyco. One day, his cellie accused Crunk of stealing a postage stamp and grabbed Crunk's cane and began hitting him with it. They went to the Hole and were released and placed in another unit - in the same cell.

These people are insane.

I had started this telling you about our COVID lockdown and how it was supposed to end on Sun. <buzzer sound> It didn't end until today, and we didn't find out that it ended till they called us for lunch and we went with D-North as usual instead of at the very end.

So, I was finally able to get back in the Library and type for the first time in over a week.

I've really [underlined] enjoyed my little vacation from work and am most definitely not [underlined] looking forward to going back. The new "#1", Duncan, is an idiot and I've heard that things are not the same since the majority of us have been locked down.

I'm not at work now 'cause I changed my days off to Tues. + Wed. to take advantage of all the Monday holidays (so I'll get three days off). My co-workers who had to go in today are hatin' me for getting an extra two days off work! <WAH/WAH>

This quarantine has proved the idiocy of their idea to put all the workers in one unit. Since D-North and C-North had the majority of workers (until their recent decision to open up jobs to all units), it really screwed things up.