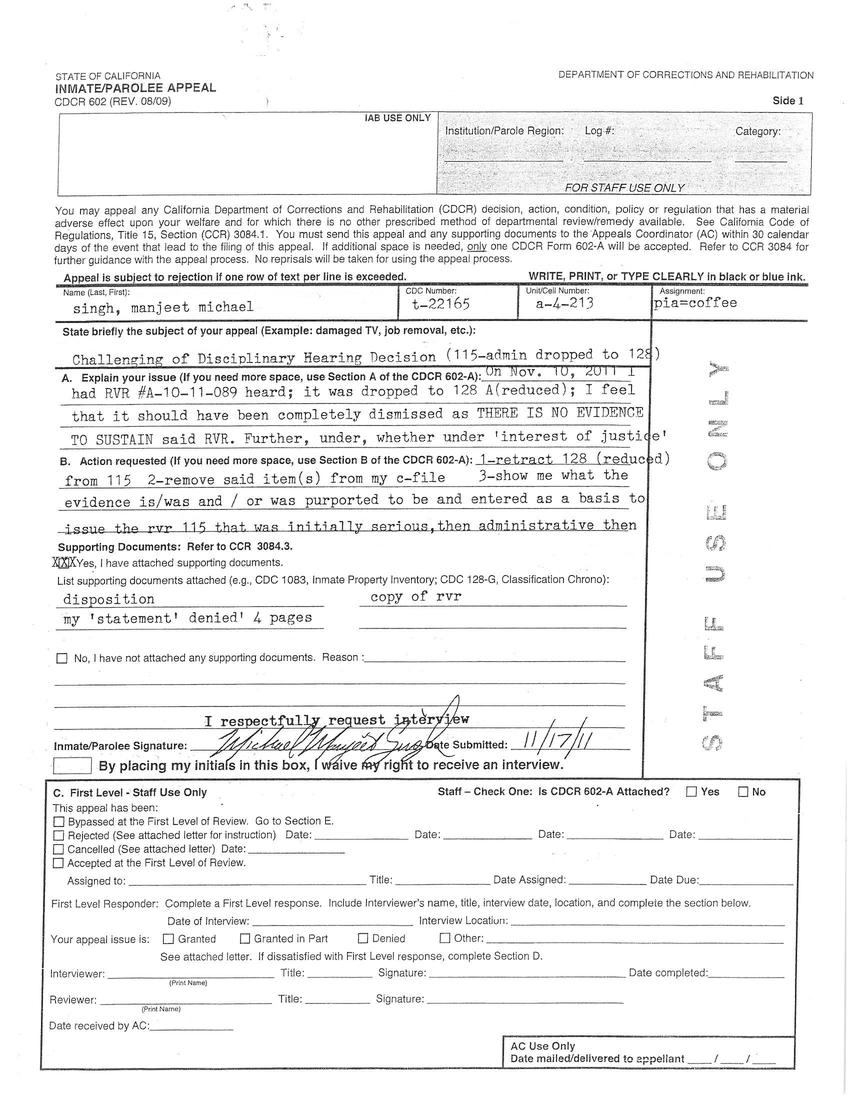 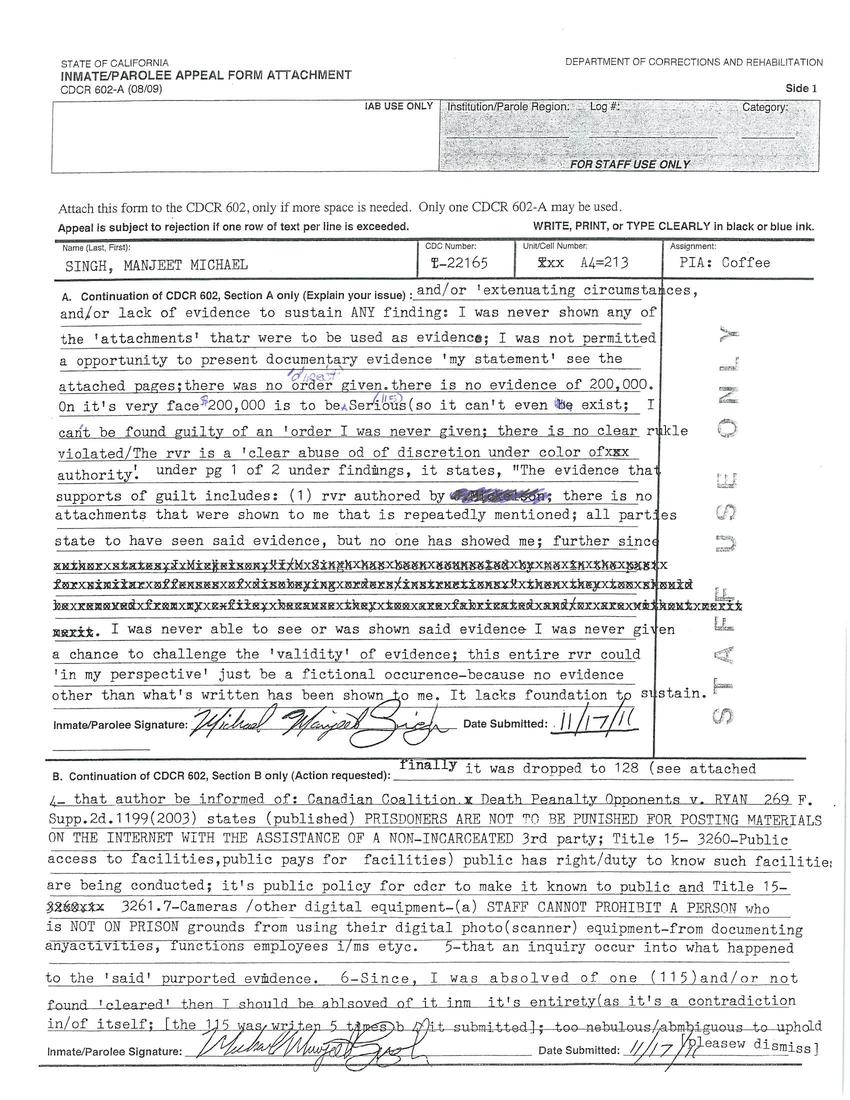 You may appeal any California Department of Corrections and Rehabilitation (CDCR) decision, action, condition, policy or regulation that has a material
adverse effect upon your welfare and for which there is no other prescribed methond of departmental review/remedy available. See Califirnia Code of
Regulations. title 15, Section (CCR) 084.1 You must send this appeal and any supporting documents to the Appeals Coordinator (AC) within 30 calendar
days of the event that lead to the filing of this appeal. if additional space is needed, only one CDCR form 602-a will be accepted. refer to CCr 3084 for further guidance with the appeal process. No reprisals will be taken for using the appeal process.

A EXPLAIN YOUR ISSUE
On Nov 10, 2011 I had RVR #A-10-11-089 heard; it was dropped to 128 A (reduced); I feel
that it should have been completely dismissed as THERE IS NO EVIDENCE TO SUSTAIN said
RVR. Further, under, whether under 'interest of justice' and/or 'extenuating circumstances,
and/or lack of evidence to sustain ANY finding: I was never shown any of
the 'attachments' that were to be used as evidence; I was not permitted a opportunity to present
documentary evidence 'my statement' see the attached pages; there was no order given. there is no evidence
of 2000,000. on it's very face 2000,000 is to be serious (so it can't even be exist; I
can't be found guilty of an 'order I was never given; there is no clear rule
violated/the rvr is a 'clear abuse of discretion under color of authority. under page 1 of 2 under findings,
it states, "The evidence that supports of guilt includes: (1) rvr authored by; there is no
attachements that were shown to me that is repeatedly mentioned; all parties
state to have seen said evedence, but no one has showed me; further since I was never able to see
or was shown said evidence I was never given a chance to challenge the 'valuidity' of evidence; this entire
rvr could 'in my perspective'just be a fictional occurance-because no evidence
other than what's written has been shown to me. It lacks foundation to sustain.

B ACTION REQUESTED
1-retract 128 (reduced) from 115
2-remove said item(s) from my c-file.
3-show me what the evedence is/was and/or was purported to be and entered as a basis to issue the rvr 115 that was initially serious, then administrative then finally it was dropped to 128 (see attached
4-that author be informed of: Canadian Coalition. Death Penalty Opponents v. RYAN 269 F.
supp. 2d.1199 (2003) states (published) PRISONERS ARE NOT TO BE PUNISHED FOR POSTING MATERIALS
ON THE INTERNET WITH THE ASSISTANCE OF A NON-INCARCEATED 3RD PARTY; tITLE 15-3260-Public
access to facilities, public pays for facilities) public has right/duty to know such facilitie are being
conducted; it's public policy for cdcr to make it known to public and Title 15-
3261.7Cameras/other digital equipment-(a) STAFF CANNOT PROHIBIT A PERSON who is NOT ON PRISON
grounds from using their digital phto (scanner) equipment-from documenting any activities,
functions employees i/ms etyc.
5-that an inquiry occur into what happened to the 'said' purported evidence.
6-since, i was absolved of one (115) and/or not found 'cleared' then i should be
absolved of it in it's entirety (as it's a contradiction in/of itself; (the 115 was written 5 times b it submitted); too
nebulous/ambiguous to uphold
please dismiss

Thanks for writing! I finished the transcription for your post.
(scanned reply – view as blog post)
uploaded Feb. 24, 2012.  Original (PDF) 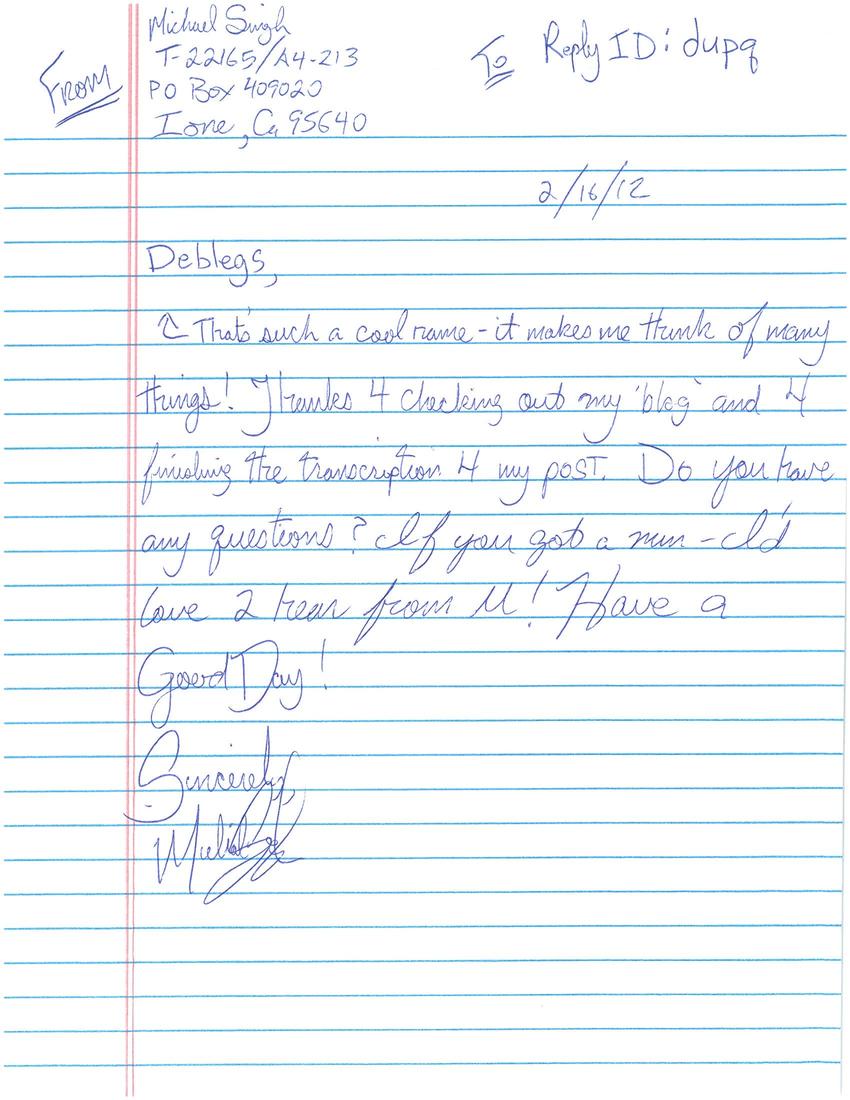