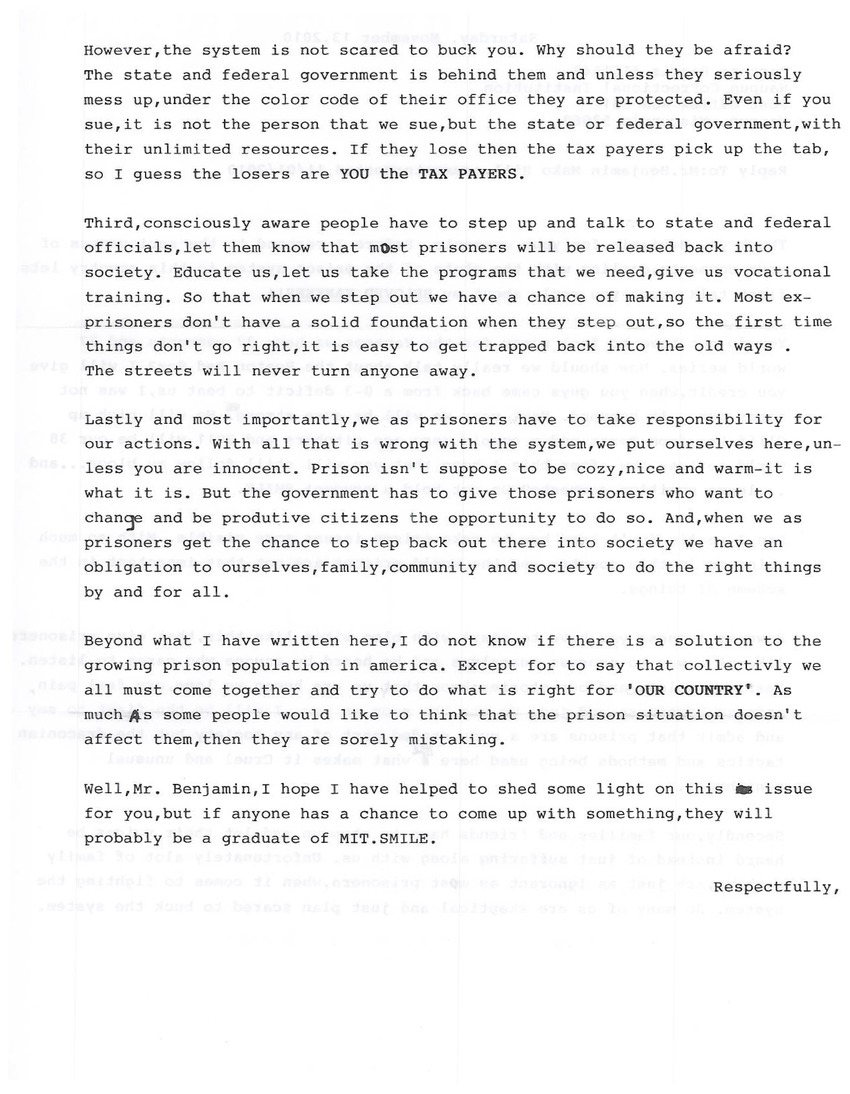 Thank you Benjamin, for you comments. Before I respond to the seriousness of your comments, dealing with the sate of the prison system in this country lets first talk about you reply about my BELOVED YANKEES!!

You do not have to feel sorry for the Yankees, we have 37 pennants and 27 world series. Now should we really talk about the Boston Red Sox? I will give you credit, when you guys came back from a 0-3 deficit to beat us, I was not happy, but __it happens. Next year we will be even stronger. We will pick up Cliff Lee, from Texas and a couple more ace pitchers and 2011 will be our 38 world series. Now after this I hope that you will still follow my blogs...and...leave comments? Do not hold a grudge! SMILE.

Ben, I really don't know how to make prison issues more visible. With so much going on in this country and the world, prisons are not that important in the scheme of things.

However, I guess you have to start with blog sites like this, that give prisoners like me a way to express ourselves and be heard, by anyone who cares to listen. Hear our voices and our stories; know, that we are human, we love, cry, feel pain, sadness, happiness and joy. We are the same as you. I will be the first to say and admit that prisons are a much needed part of any society, but the draconian tactics and methods being used here are what makes it Cruel and unusual punishment.

Secondly, our families and friends have to step up, and let their voices be heard instead of just suffering along with us. Unfortunately a lot of family members, are just as ignorant as most prisoners, when it comes to fighting the system. So many of us are skeptical and just plain scared to buck the system.

However, the system is not scared to buck you. Why should they be afraid? The state and federal government is behind them and unless they seriously mess up, under the color code of their office they are protected. Even if you sue, it is not the person that we sue, but the state or federal government, with their unlimited resources. If they loose then the tax payers pick up the tab, so I guess the losers are YOU the TAX PAYERS.

Third, consciously aware people have to step up and talk to state and federal officials, let them know that most prisoners will be released back into society. Educate us, let us take the programs that we need, give us vocational training. So that when we step out we have a chance of making it. Most ex-prisoners don't have a solid foundation when they step out, so the first time things don't go right, it is easy to get trapped back into the old ways. The streets will never turn anyone away.

Lastly and most importantly, we as prisoners have to take responsibility for our actions. With all that is wrong with the system, we put ourselves here, unless you are innocent. Prison isn't suppose to be cozy, nice warm - it is what it is. But the government has to give those prisoners who want to change and be productive citizens the opportunity to do so. And, w hen we as prisoners get the chance to step back out there into society we have an obligation to ourselves, family, community and society to do the right things by and for all.

Beyond what I have written here, I do not know if there is a solution to the growing prison population in america. Except for to say that collectively we all must come together and try to do what is right for 'OUR COUNTRY'. As much as some people would like to think that the prison situation doesn't affect them, then they are sorely mistaking.

Well, Mr. Benjamin, I hope I have helped to shed some light on this issue for you, but if anyone has a chance to come up with something, they will probably be a graduate of MIT. SMILE.