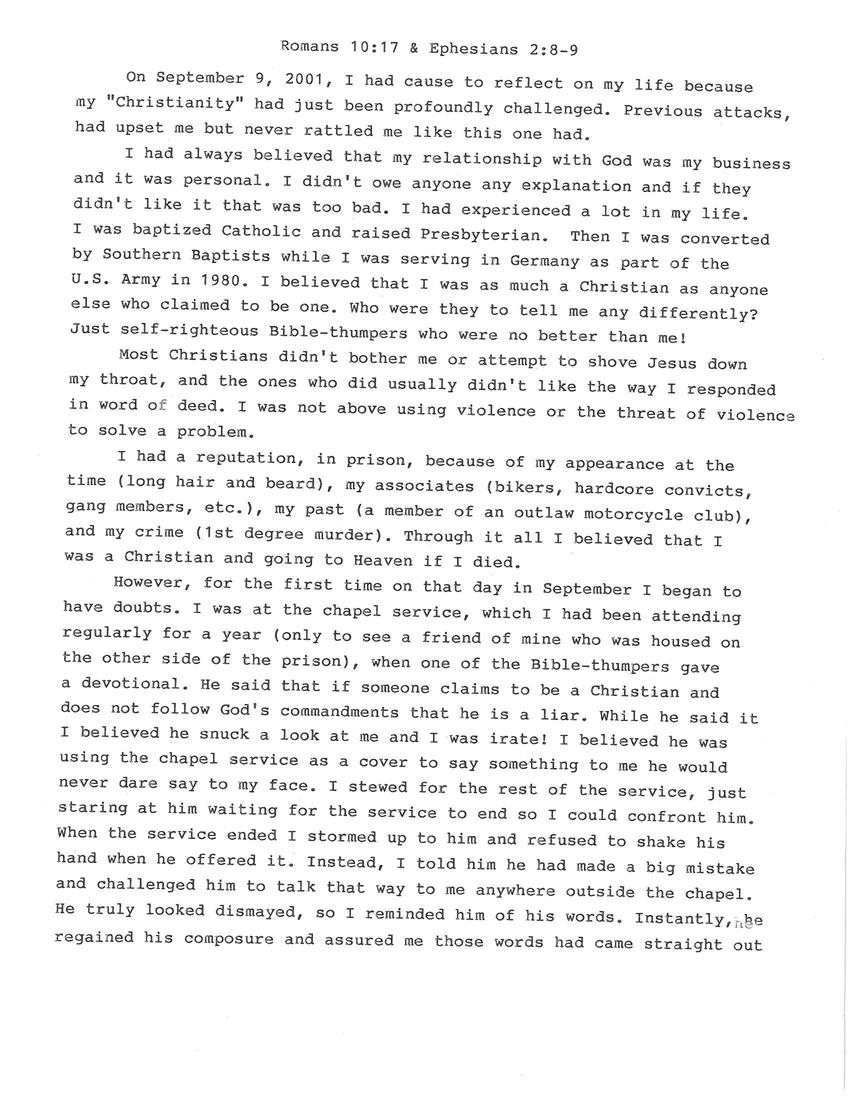 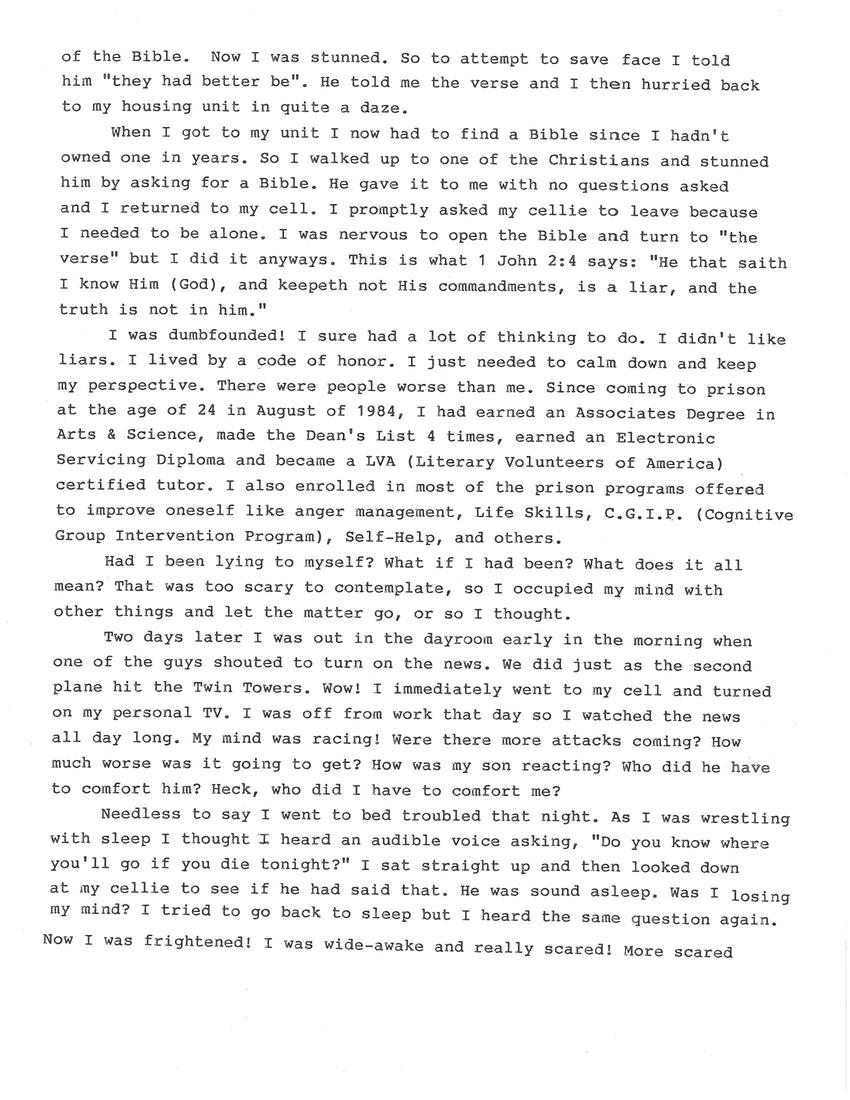 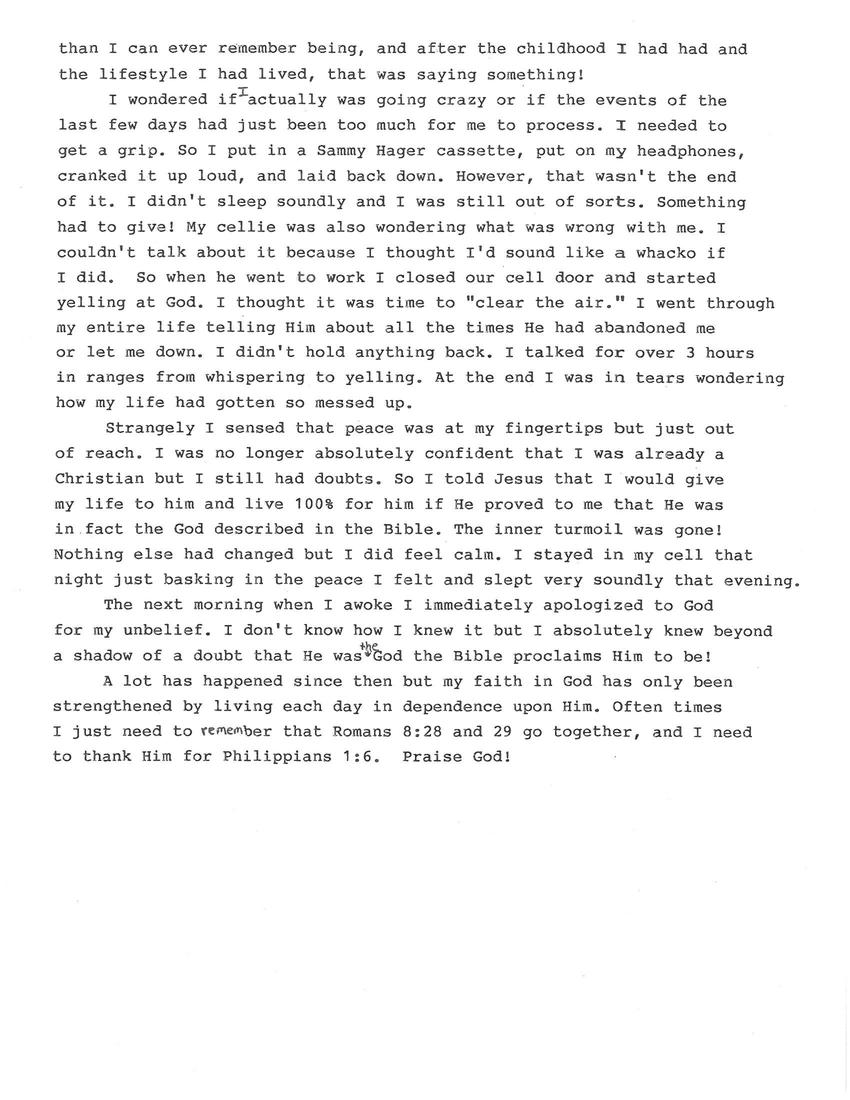 On September 9, 2001, I had cause to reflect on my life because my "Christianity" had just been profoundly challenged. Previous attacks, had upset me but never rattled me like this one had.

I had always believed that my relationship with God was my business and it was personal. I didn't owe anyone any explanation and if they didn't like it that was too bad. I had experienced a lot in my life. I was baptized Catholic and raised Presbyterian. Then I was converted by Southern Baptists while I was serving in Germany as part of the U.S. Army in 1980. I believed that I was as much as a Christian as anyone else who claimed to be one. Who were they to tell me any differently? Just self-righteous Bible-thumpers who were no better than me!

Most Christians didn't bother me or attempt to shove Jesus down my throat, and the ones who did usually didn't like the way I responded in word of deed. I was not above using violence or the threat of violence to solved a problem.

I has a reputation, in prison, because of my appearance at the time (long hair and beard), my associates (bikers, hardcore convicts, gang members, etc.), my past (a member of an outlaw motorcycle club), and my crime (1st degree murder). Through it all I believed that I was Christian and going to Heaven if I died.

However, for the first time on that day in September I began to have doubts. I was at the chapel for service, which I had been attending regularly for a year (only to see a friend of mine who was housed on the other side of the prison), when one of the Bible-thumpers gave a devotional. He said that if someone claims to be a Christian and does not follow God's commandments that he is a liar. While he said it I believed he snuck a look at me and I was irate! I believed he was using the chapel service as a cover to say something to me he would never dare say to my face. I stewed for the rest of the service, just staring at him waiting for the service to end so I could confront him. When the service ended I stormed up to him and refused to shake his hand when he offered it. Instead, I told him he made a big mistake and challenged him to talk that way to me anywhere outside the chapel. He truly looked dismayed, so I reminded him of his words. Instantly, he regained his composure and assured me those words had came straight out of the Bible. Now I was stunned. So to attempt to save face I told him "they had better be". He told me the verse and then I hurried back to my housing unit in quite a daze.

When I got to my unit I now had to find a Bible since I hadn't owned one in years. So I walked up to one of the Christians and stunned him by asking for a Bible. He gave it to me with no questions asked and I returned to my cell. I promptly asked my cellie to leave because I needed to be alone. I was nervous to open the Bible and turn to "the verse" but I did it anyways. This is what 1 John 2:4 says: "He that saith I know Him (God), and keepeth not His commandments, is a liar, and the truth is not in him."

I was dumbfounded! I sure had a lot of thinking to do. I didn't like liars. I lived by a code of honor. I just needed to calm down and keep my perspective. There were people worse than me. Since coming to prison at the age of 24 in August of 1984, I had earned an Associates Degree in Arts & Science, made the Dean's list 4 times, earned an Electronic Servicing Diploma and became a LVA (Literary Volunteers of America) certified tutor. I also enrolled in most of the prison programs offered to improve oneself like anger management, Life Skills, C.G.I.P. (Cognitive Group Intervention Program), Self-Help, and others.

Had I been lying to myself? What if I had been? What does it all mean? That was too scary to contemplate, so I occupied my mind with other things and let the matter go, or so I thought.

Two days later I was out in the dayroom early in the morning when one of the guys shouted to turn on the news. We did just as the second plane hit the Twin Towers. Wow! I immediately went to my cell and turned on my personal TV. I was off from work that day so I watched the news all day long. My mind was racing! Were there more attacks coming? How much worse was it going to get? How was my son reacting? Who did he have to comfort him? Heck, who did I have to comfort me?

Needless to say I went to bed troubled that night. As I was wrestling with sleep I thought I heard an audible voice asking, "Do you know where you'll go if you die tonight?" I say straight up and looked down at my cellie to see if he had said that. He was sound asleep. Was I losing my mind? I tried to go back to sleep but I heard the same question again. Now I was frightened! I was wide-awake and really scared! More scared than I can ever remember being, and after the childhood I had had and the lifestlye I had lived, that was saying something!

I wondered if I actually was going crazy of if the events of the last few days had just been to much for me to process. I needed to get a grip. So I put in a Sammy Hager cassette, put on my headphones, cranked it up loud, and laid back down. However, that wasn't the end of it. I didn't sleep soundly and I was still out of sorts. Something had to give! My cellie was also wondering what was wrong with me. I couldn't talk about it because I thought I'd sound like a whacko if I did. So when he went to work I closed out cell door and started yelling at God. I thought it was time to "clear the air." I went through my entire life telling Him about all the times He had abandoned me or let me down. I didn't hold anything back. I talked for over 3 hours in ranges from whispering to yelling. At the end I was in tears wondering how my life had gotten so messed up.

Strangely I sensed that peace was at my fingertips but just out of reach. I was no longer absolutely confident that I was already a Christian but I still had doubts. So I told Jesus that I would give my life to him and live 100% for him if He proved to me that He was in fact the God described in the Bible. The inner turmoil was gone! Nothing else had changed but I did feel calm. I stayed in my cell that night just basking in the peace I felt and slept very soundly that evening.

The next morning when I awoke I immediately apologized to God for my unbelief. I don't know how I knew it but I absolutely knew beyond a shadow of a doubt that He was the God the Bible proclaims Him to be!

A lot has happened since then by my faith in God has only been strengthened by living each day in dependence upon Him. Often times I just need to remember that Romans 8:28 and 29 go together, and I need to thank Him for Philippians 1:6. Praise God! 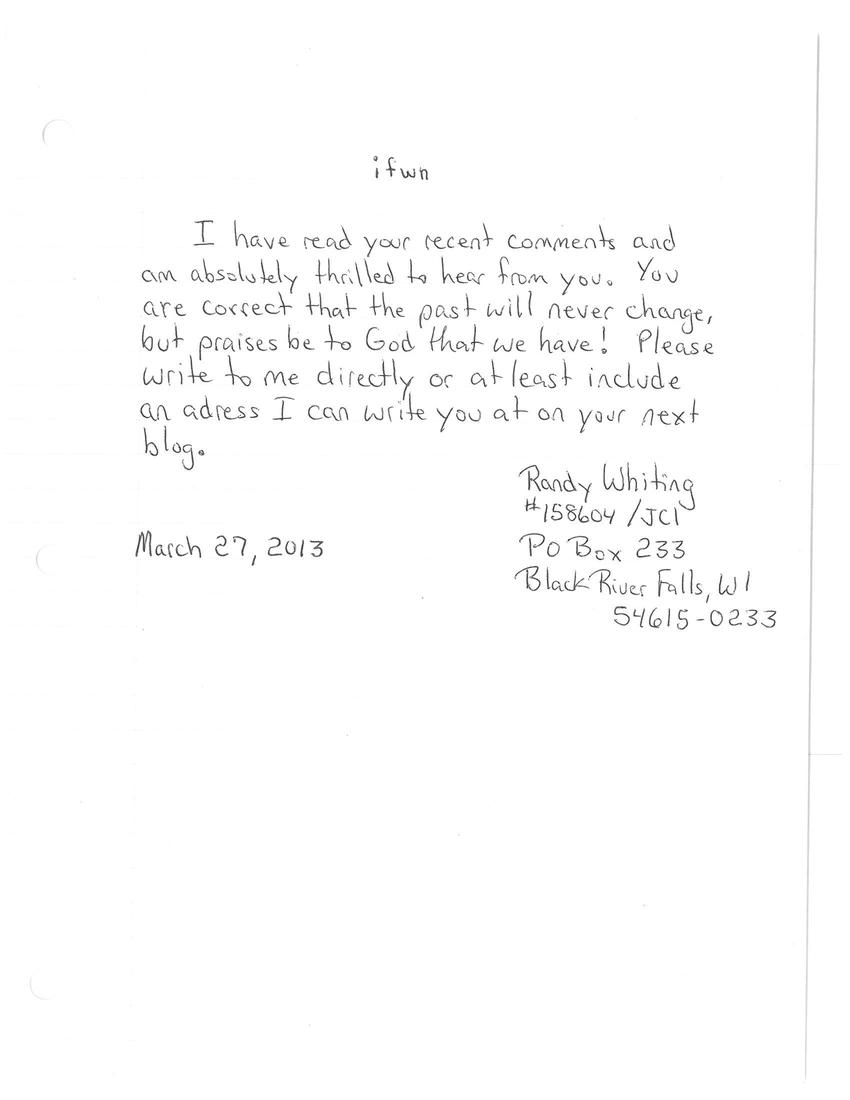 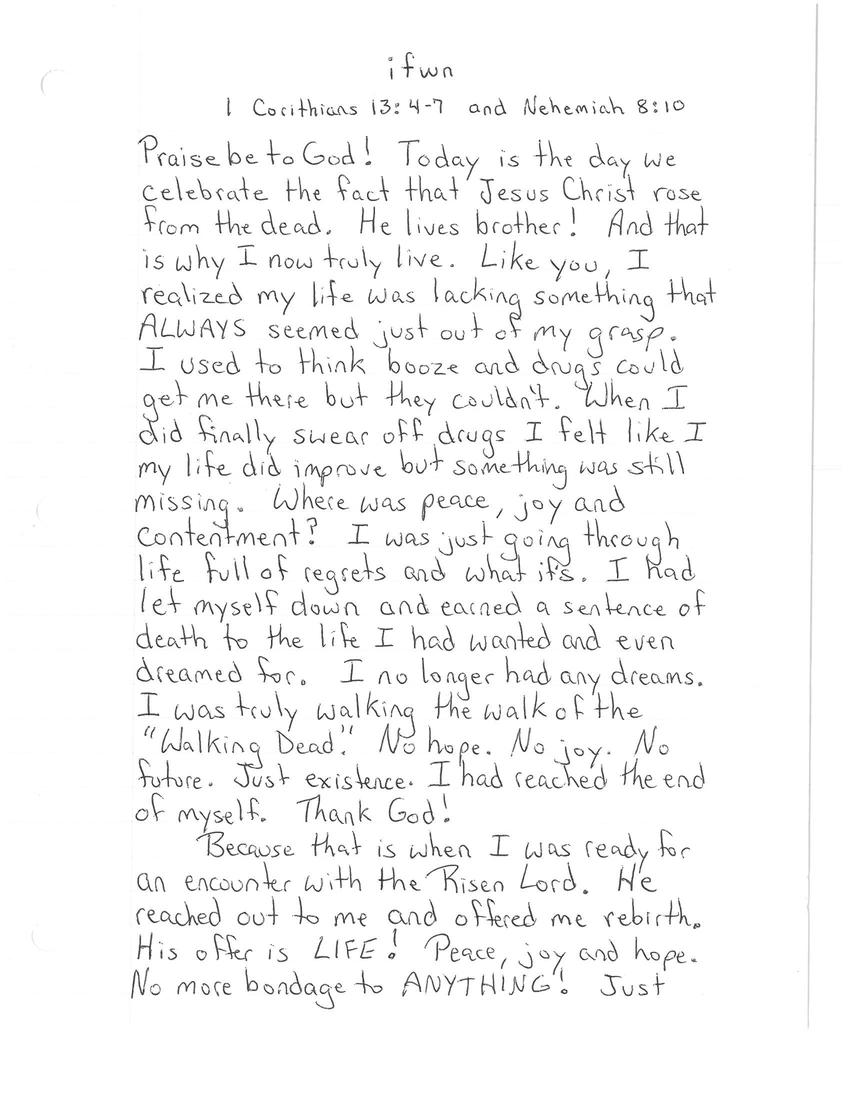 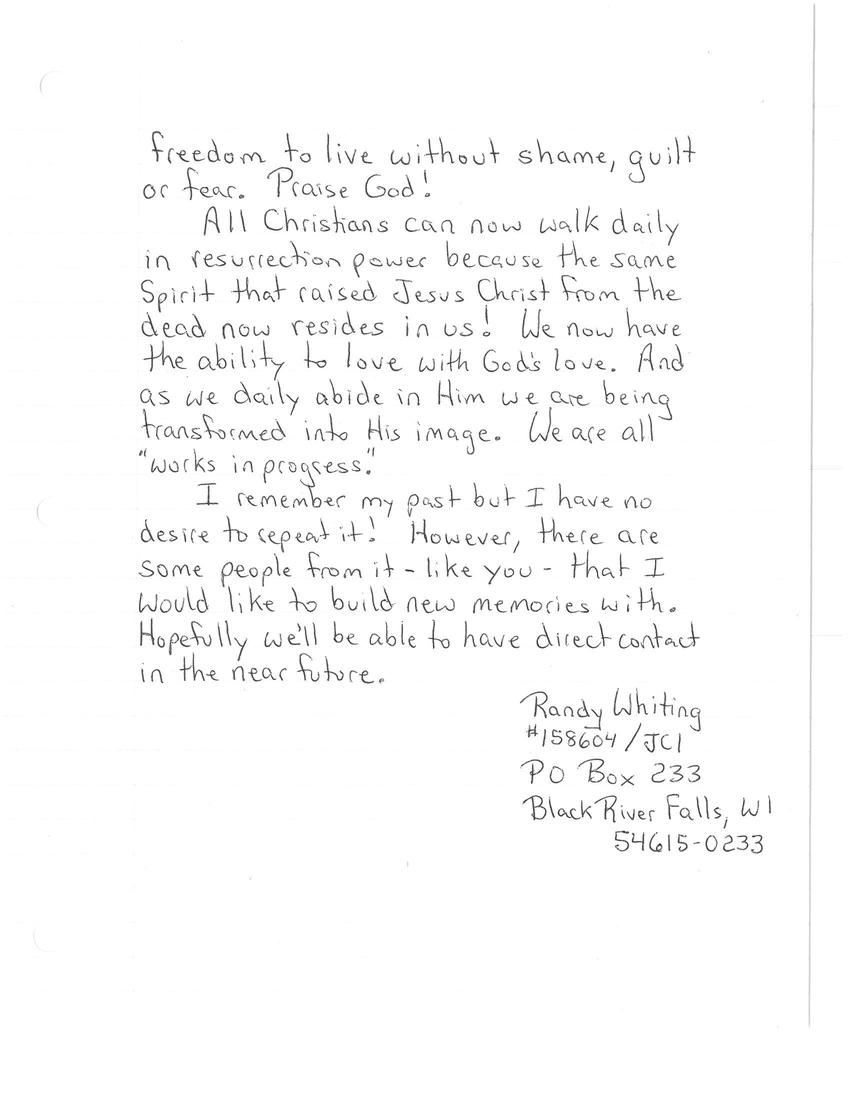 Yes!! You did it , your fucking kidding me, all these years I was led to believe you were there, with your little motorcycle gang buddies, some how something terrible happen, but that's not what happened, you and you alone killed this poor girl, knowingly and willfully took this girls life. I'm totally disgusted! First let me start with this motorcycle gang, what kind of man has to wear a leather jacket, hang out in numbers to intimidate people, commit crimes, against other people, no man I want to know, and you say your a man, but didn't you let a couple of your little buddies go down for you instead of standing up in the beginning, and say it was you that did this terrible thing, you and you alone.You say your a change man now? That you had to change from the man you were in Germany, well that's the only man I know, and if you had to change, then I don't fucking know you at all, let me tell you I don't have to change from the man I was in Germany, I just had fun made love, and never hurt anybody, I don't have to change from the man I am today, because at the core I am still that same man, I never knowingly or willfully hurt anybody in my life, that's who I am, that's who I've always been, your shit is one big lie. All these years I felt sorry for you, when I should have felt sorry for your victim, and her family. I have to many things going on in my life to worry about you, don't write me back, we will never get together again.