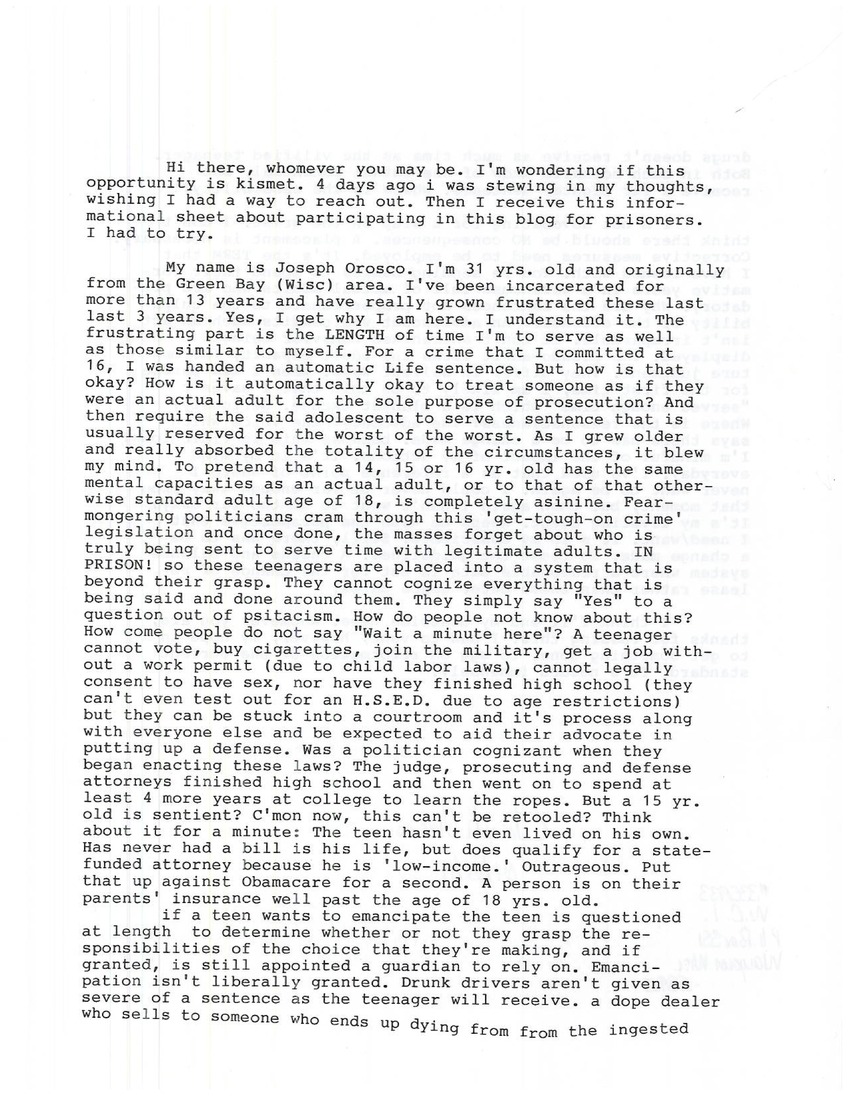 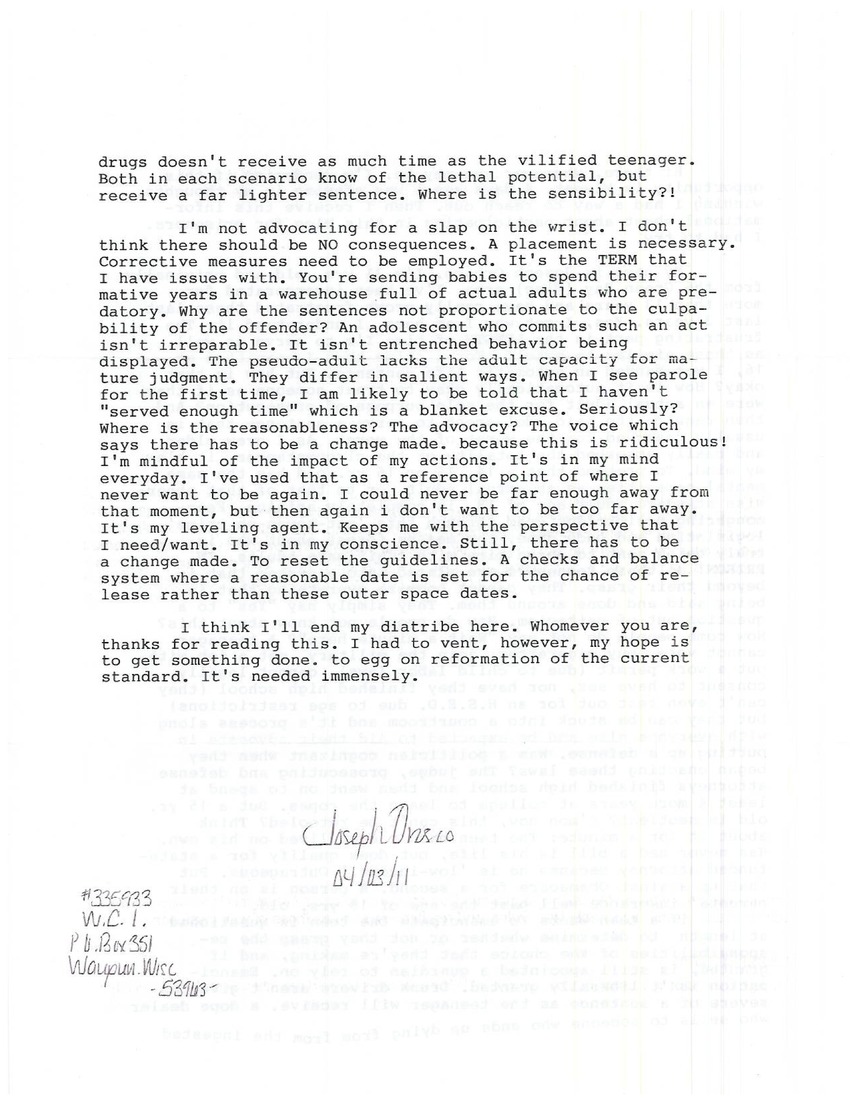 Hi there whomever you may be. I'm wondering if this opportunity is kismet. Four days ago, I was stewing in my thoughts, wishing I had a way to reach out. Then I receive this informational sheet about participating in this blog for prisoners. I had to try.

My name is Joseph Orosco. I'm 31 years old and originally from the Green Bay, Wisconsin area.

I've been incarcerated for more than 13 years and have really grown frustrated these last three years. Yes, I get why I'm in here. I understand it. The frustrating part is the LENGTH of time I'm to serve, as well as those similar to myself. For a crime that I committed when I was 16, I was handed an automatic life sentence. But how is that okay? How is it automatically okay to treat someone as if they were an actual adult for the sole purpose of prosecution? And then require the said adolescent to serve a sentence that is usually reserved for the worst of the worst?

As I grow older and really absorb the totality of the circumstances, it blew my mind. To pretend that a 14, 15, or 16-year-old has the same mental capacities as an adult, or the otherwise standard adult age of 18, is completely asinine. Fear-mongering politicians cram through this "get-tough-on-crime" legislation and, once done, the masses forget about who is truly being sent to serve time with legitimate adults IN PRISON! So these teenagers are placed into a system that is beyond their grasp. They cannot recognize everything that is being said and done to them. They simply say yes to a question out of psitacism.

How do people not know about this? How come people don't say, "Wait a minute here"?

A teenager cannot vote, buy cigarettes, join the military, get a job without a work permit (due to child labor laws), cannot legally consent to sex, nor finish high school. They cannot test out for an HSED due to age restrictions. But they can be stuck in a courtroom and its process, along with everyone else, and be expected to aid their advocate in putting up a defense. Was a politician cognizant when they began enacting these laws? The judge, prosecuting and defense attorneys—they finished high school and went on to spend four more years in college to learn the ropes. But a 15-year-old is sentient? C'mon now, can't this be retooled?

Think about it for a minute: a teenager hasn't even lived on his own. Has never had a bill in his life. But he qualifies for a state-funded attorney because he is "low income". Outrageous. Put that up against Obamacare for a second. A person is on their parents' insurance well past the age of 18.

If a teenager wants to emancipate, the teenager is questioned at length to determine whether or not they grasp the responsibilities of the choice that they're making. If granted, they're still appointed a guardian to rely on. Emancipation isn't liberally granted.

Drunk drivers aren't given as severe a sentence that the teenager will receive. A dope dealer who sells to someone who ends up dying from the ingested drugs doesn't receive as much time as the vilified teenager. Both, in each scenario, know of the lethal potential but receive a far lighter sentence. Where is the sensibility!?

I'm not advocating for a slap on the wrist. I don't think there should be NO consequences. A placement is necessary. Corrective measures need to be employed. it's the TERM that I have issues with. You're sending babies to spend their formative years in a warehouse full of actual predatory adults. Why are the sentences not proportionate to the culpability of the offender? An adolescent who commits such an act isn't irreparable. It isn't entrenched behavior being displayed. The psuedo-adult lacks the adult capacity for mature judgment. They differ in salient ways.

When I see parole for the first time, I am likely to be told that I haven't "served enough time," which is a blanket excuse. Seriously? Where is the reasonableness? The advocacy? The voice that says that there has to be a change! Because this is ridiculous!

I'm mindful of the impact of my actions. It's in my mind every day. I've used that as a reference point of where I never wanted to be again. I could never be far enough away form that moment, but then again, I don't want to be too far away. It's my leveling agent. Keeps me with the perspective that I need and want. It's in my conscience.

Still, there has to be a change made. Reset the guidelines. A checks and balance system where a reasonable date is set for the chance of release rather than these outer space dates.

I think I'll end my diatribe here. Whomever you are, thanks for reading this. I had to vent, however, my hope is to get something done. To egg on reformation of the current standard. It's needed immensely.