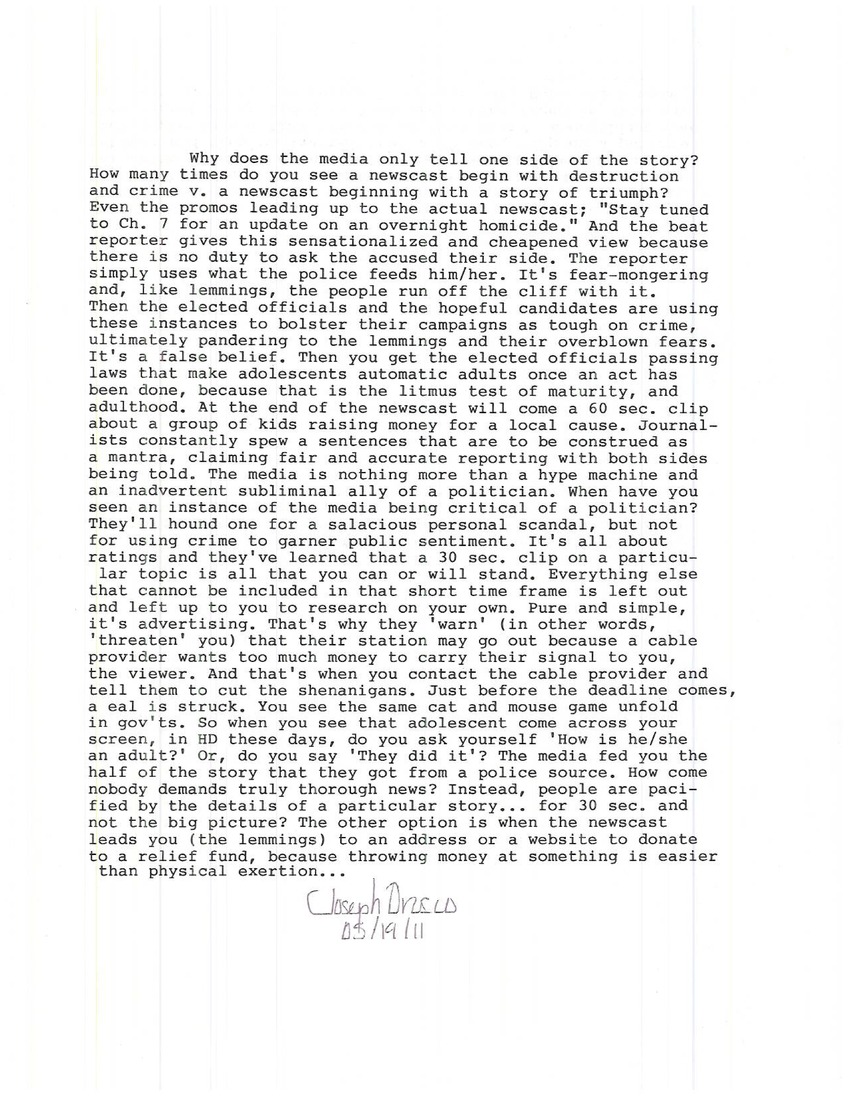 Why does the media only tell one side of the story? How many times do you see a newscast begin with destruction and crime versus a newscast beginning with a story of triumph? Even the promos leading up to the actual newscast: "Stay tuned to Ch. 7 for an update on the overnight homicide." And the best reporter gives this sensationalized and cheapened view because there is no duty to ask the accused their side. The reporter simply uses what the police feeds him/her. It's fear-mongering and, like lemmings, the people run off the cliff with it.

Then the elected officials and the hopeful candidates are using these instances to bolster their campaigns as touch on crime, ultimately pandering to the lemmings and their overblown fears. It's a false belief. Then you get the elected officials passing laws that make adolescents automatic adults once an act has been done because that is the litmus test of maturity and adulthood. At the end of the newscast will come a 60 second clip about a group of kids raising money for a local cause.

Journalists constantly spew sentences that are constructed as a mantra, claiming fair and accurate reporting with both sides being told. The media is nothing more than a hype machine and an inadvertent subliminal ally of a politician. When you have seen an instance of the media being critical of a politician? They'll hound one for a salacious personal scandal but not for using crimes to garner public sentiment. It's all about the ratings, and they've learned that a 30 second clip on a particular topic is all that you can or will stand. Everything else that cannot be included in that short time frame is left out and left up to you to research on your own. Pure and simple; it's advertising.

That's why they "warn" (in other words, threaten you) that their station may go out because a cable provider wants too much money to carry their signal to you, the viewer. And that's when you contact the cable provider and tell them to cut the shenanigans. Just the deadline comes, a deal is struck. You see the same cat and mouse game unfold in the government.

So when you see that adolescent come across your screen, in HD these days, do you ask yourself, "How is he/she an adult" or do you say, "They did it"? The media fed you half the story that they got from a police source. How come nobody demands truth in the news? Instead, people are pacified by the details of a particular story for 30 seconds. But not the big picture?

The other option is when the newscast leads you (the lemmings) to an address or a website to donate to a relief fund because throwing money at something is easier than physical exertion.