Does Anyone Read This Thing? 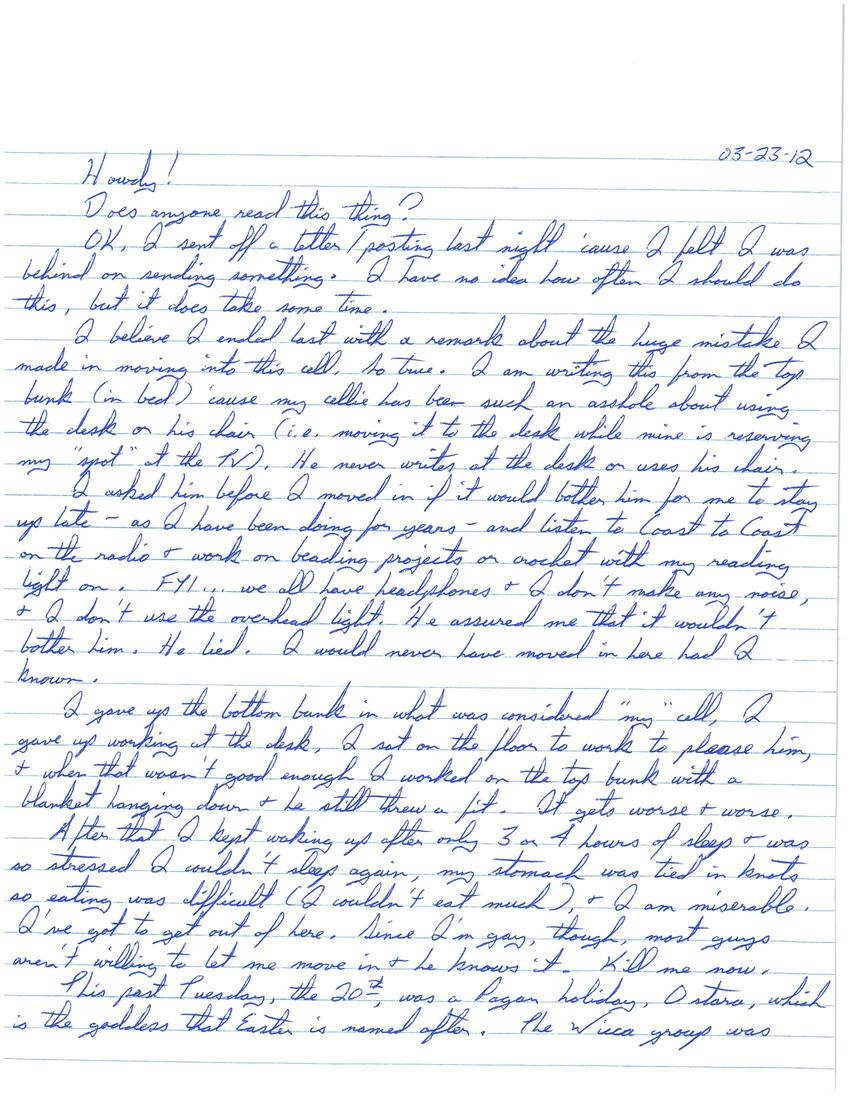 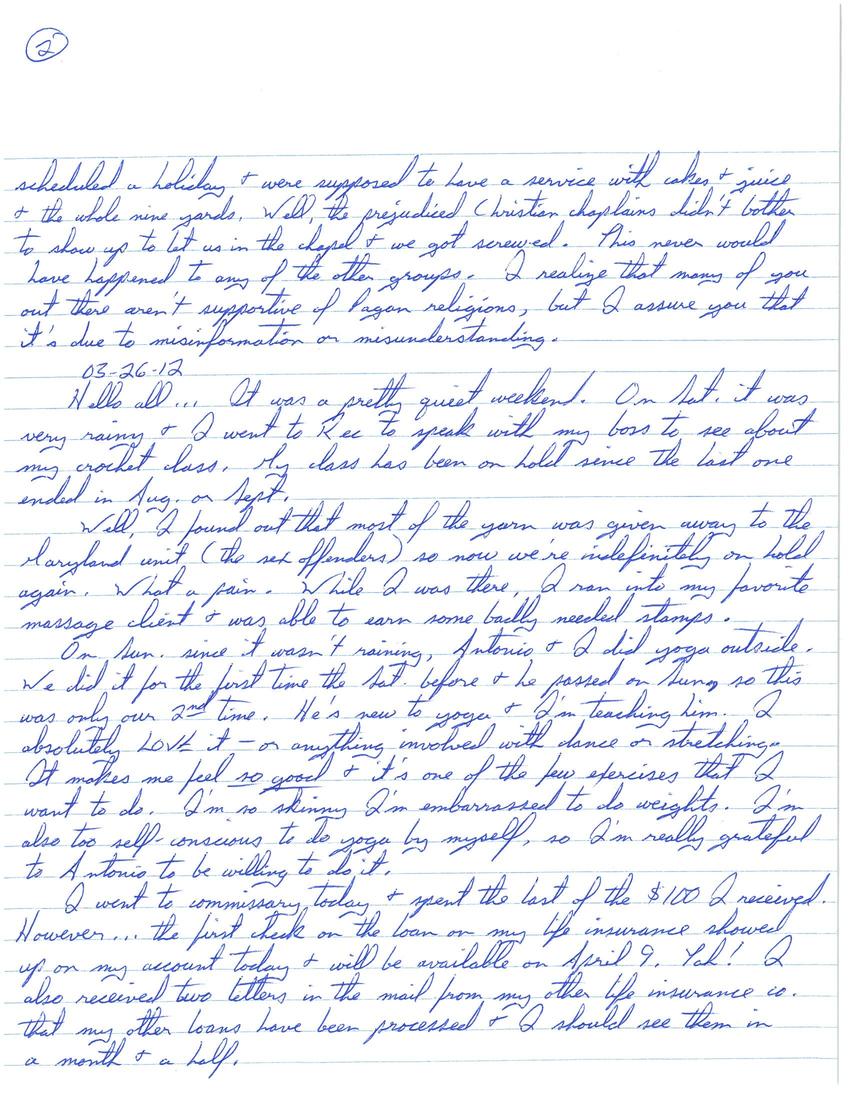 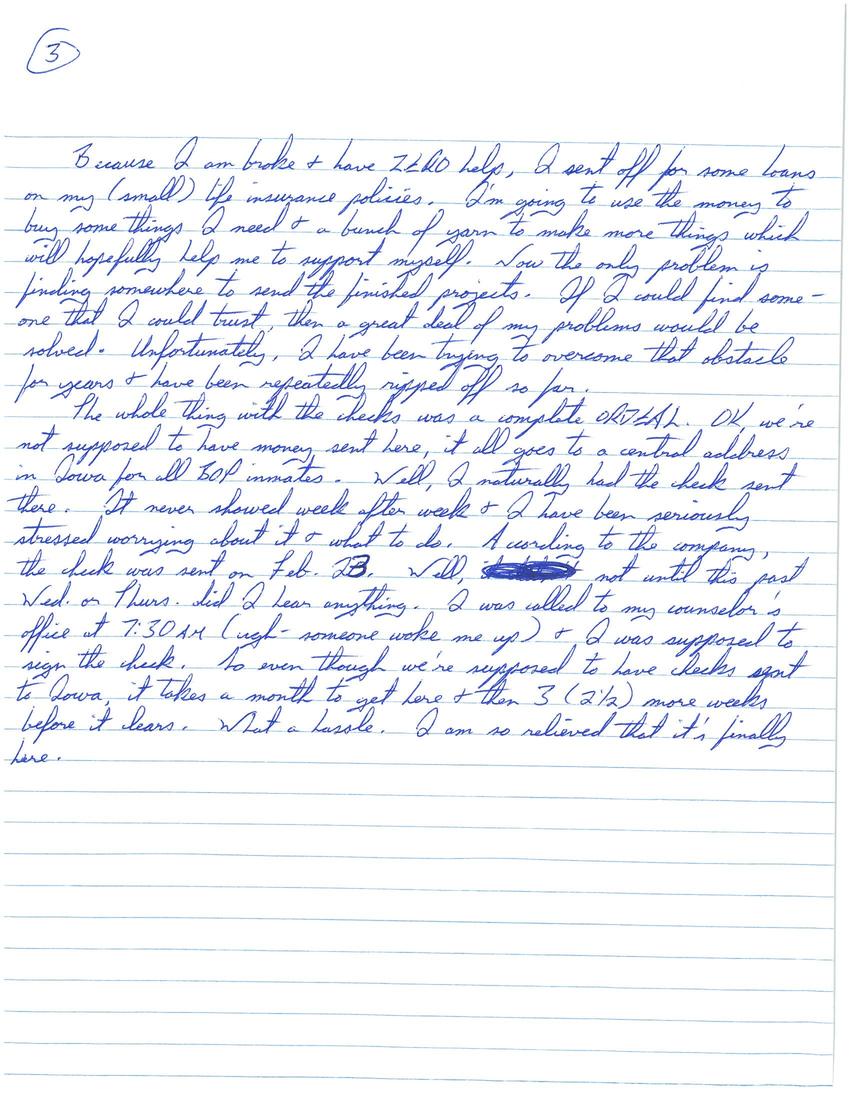 03-23-12
Howdy!
Does anyone read this thing?
OK, I sent off a letter/posting last night 'cause I felt I was behind on sending something. I have no idea how often I should do this, but it does take some time.
I believe I ended last with a remark about the huge mistake I made in moving into this cell. So true. I am writing this from the top bunk (in bed) 'cause my cellie has been such an asshole about using the desk or his chair (i.e. moving it to the desk while mine is reserving my "spot" at the TV). He never writes at the desk or uses his chair.
I asked him before I moved in if it would better him fo me to stay up late - as I have been doing for years - and listen to Coast to Coast on the radio & work on reading projects or crochet with my reading light on. FYI... we all have headphones & I don't make any noise, & I don't use the overhead light. He assured me that it wouldn't better him. He lied. I would never have moved in here had I known.
I gave up the better bunk in what was considered "my" cell, I gave up working at the desk, I sat on the floor to work to pleas him, & when that wasn't good enough I worked on the top bunk with a blanket hanging down & he still threw a fit. It gets worse & worse.
After that I kept waking up after only 3 or 4 hours of sleep & was so stressed I couldn't sleep again, my stomach was tied in knots so eating was difficult (I couldn't eat much), & I am miserable. I've got to get out of here. Since I'm gay, though, most guys aren't willing to let me move in & he knows it. Kill me now.
This past Tuesday, the 20th, was a Pagan holiday, Ostara, which is the goddess that EAster is named after. The Wicca group was scheduled a holiday & were supposed to have a service with cakes & juice & the whole nine yards. Well, the prejudiced Christian chaplains didn't bother to show up o let us in the chapel & we got screwed. This never would have happened to any of the other groups. I realize that many of you out there aren't supportive of Pagan religions, but I assure you that it's due to misinformation or misunderstanding.
03-26-12
Hello all... It was a pretty quiet weekend. On Sat. it was very rainy & I wend to Rec to speak with my boss to see about my crochet class. My class has been on hold since the last one ended in Aug. or Sept.
Well, I found out that most of the yarn was given away to the Maryland unit (the sex offenders) so now we're indefinitely on hold again. What a pain. While I was there, I ran into my favorite massage client & was able to earn some badly needed stamps.
On Sun. since it wasn't training, Antonio & I did yoga outside. We did it for the first time the Sat. before & he passed on Sun., so this was only our 2nd time. He's new to yoga & I'm teaching him. I absolutely LOVE it - or anything involved with dance or stretching. It makes me feel so good & it's one of the few exercises that I want to do. I'm so skinny I'm embarrassed to do weights. I'm also to self-conscious to do yoga by myself, so I'm really grateful to Antonio to be willing to do it.
I went to commissary today & spent the last of the $100 I received. However... the first check on the loan on my life insurance showed up on my account today & will be available on April 9. Yak! I also received two letters in the mail from my other life insurance co. that my other loans have been processed & I should see them in a month & a half.
Because I am broke & have ZERO help, I sent off for some loans on my (small) life insurance policies. I'm going to use the money to buy some things I need & a bunch of yarn to make more things which will hopefully help me to support myself. Now the only problem is finding somewhere to send the finished projects. If I could find someone that I could trust, then a great deal of my problems would be solved. Unfortunately, I have been trying to overcome that obstacle for years & have been repeatedly ripped off so far.
The whole thing with the checks was a complete ORDEAL. OK, we're not supposed to have money sent here, it all goes to a control address in Iowa for all BOP inmates. Well, I naturally had the check sent there. It never showed week after week & I have been seriously stressed worrying about it & what to do. According to the company, the check was sent on Feb. 12. Well not until this past Wed. or Thurs. did I hear anything. I was called to my counselor's office at 7:30 AM (ugh- someone woke me up) & I was supposed to sign the check. So even though we're supposed to have checks sent to Iowa, it takes a month to get here & then 3 (2 1/2) more weeks before it lears. What a hassle. I am so relieved that it's finally here.

hi, Kelly. i've been reading and rather enjoying your blog today. you're a very good writer, and your descriptions of the prison give me a lot of insight into the experience of being an inmate. thank you for that. i feel your anxiety and frustration and think it is very understandable. thank you for reaching out to us here on the outside. there are many of us who stand in solidarity with you, and we do all we can. hopefully, it will amoount to something some day. peace and love to you.