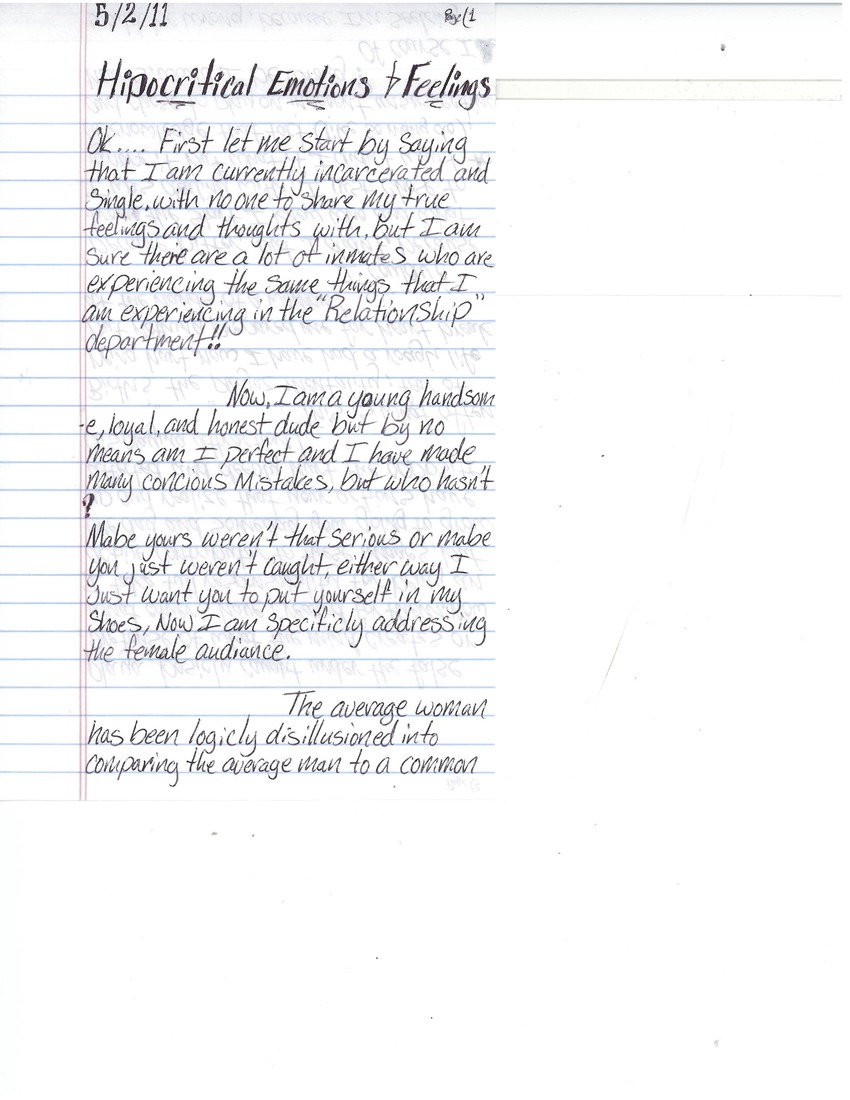 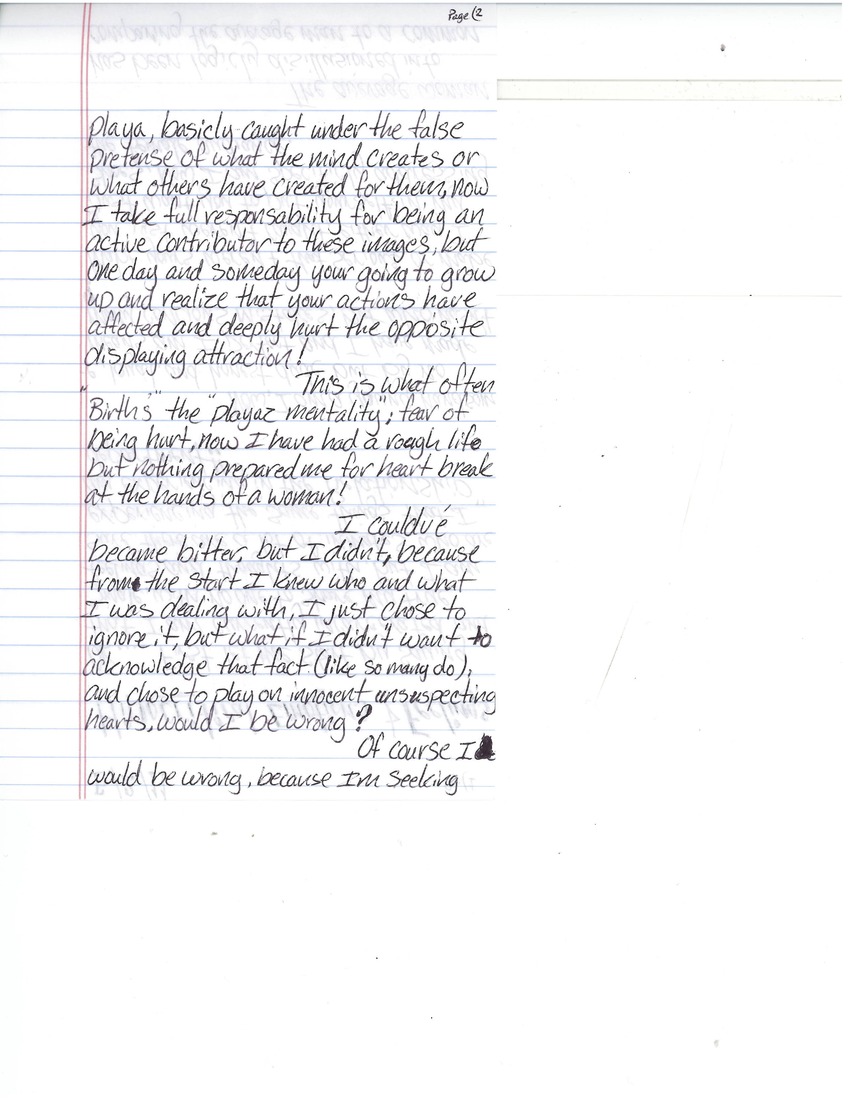 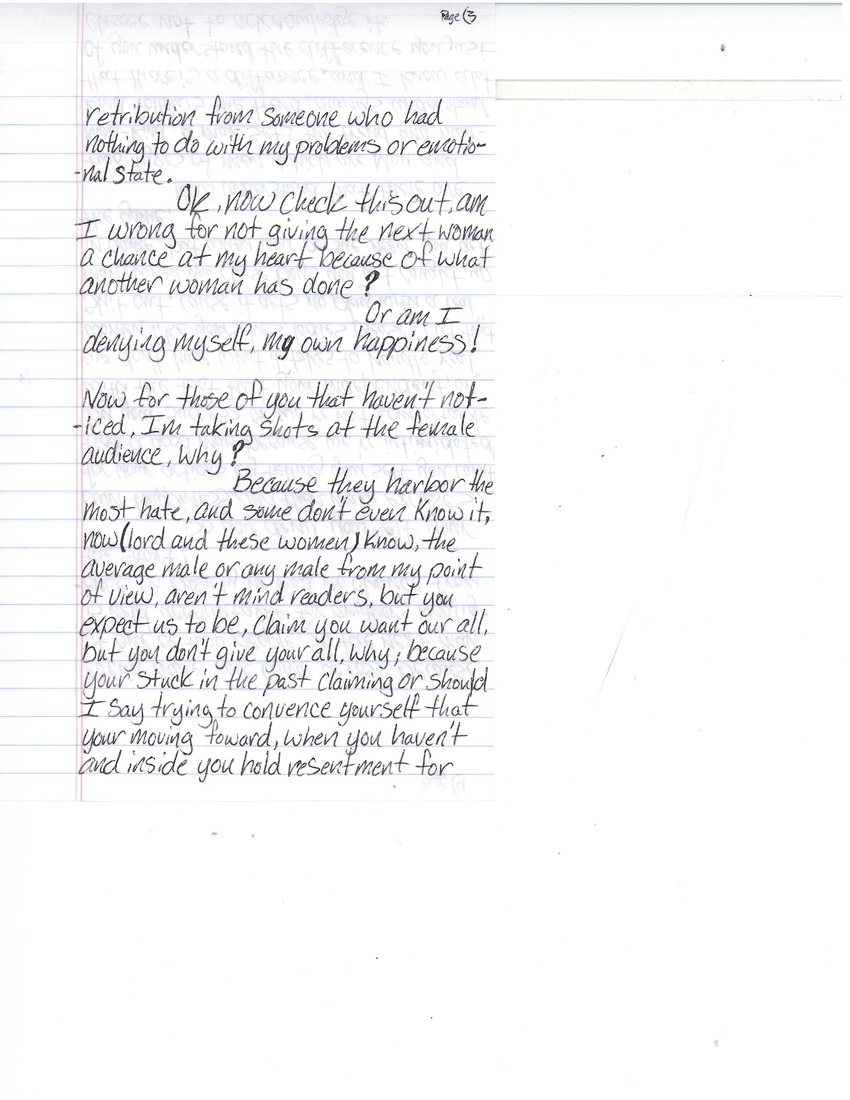 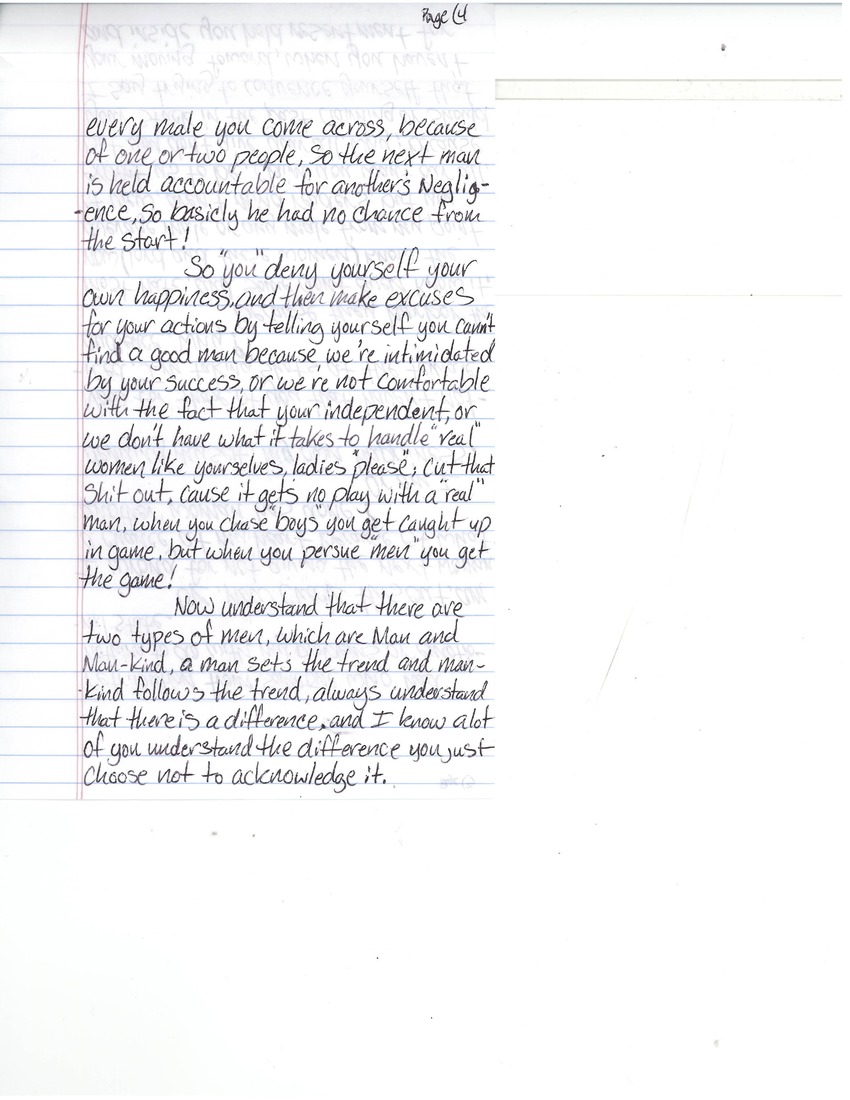 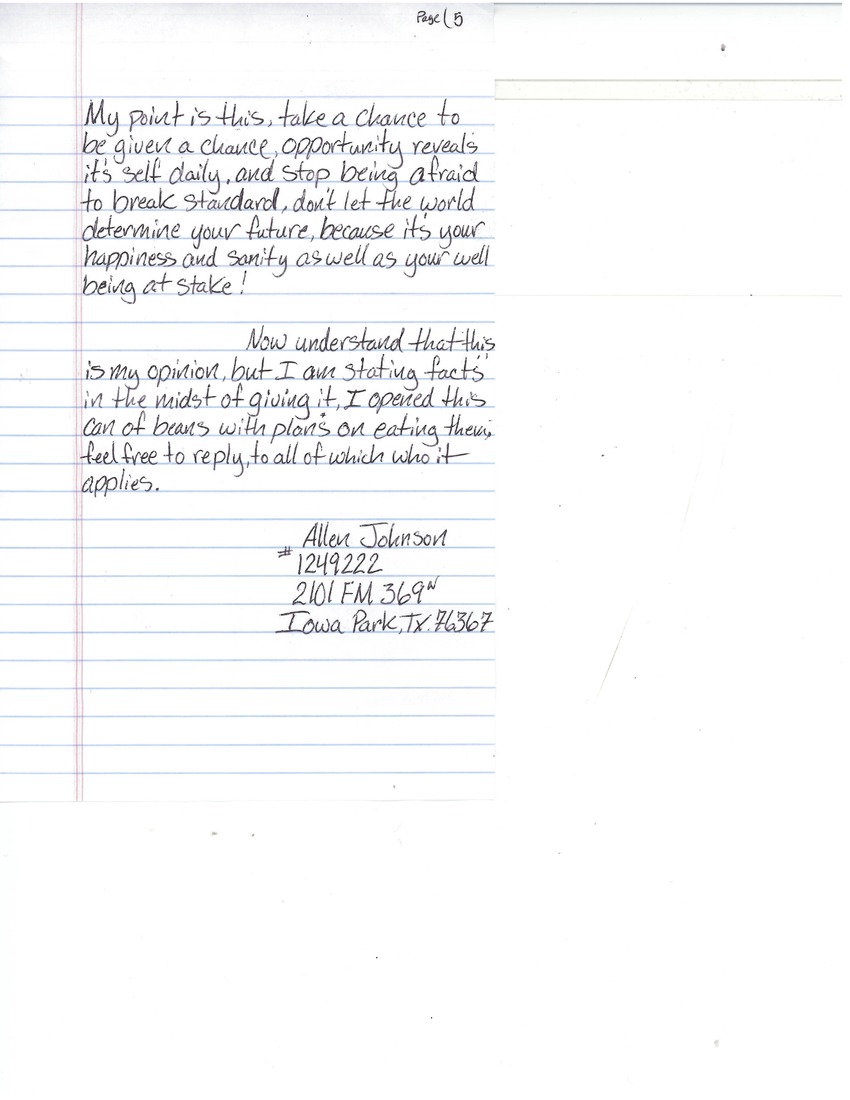 Now, I am a young handsome, loyal and honest dude but by no means am I perfect and I have made many conscious mistakes, but who hasn't?

Maybe yours weren't that serious or maybe you just weren't caught, either way I just want you to put yourself in my shoes, now I am specifically addressing the female audience.

The average woman has been logically disillusioned into comparing the average man to a common playa, basically caught under the false pretence of what the mind creates or what others have created for them, now I take full responsibility for being an active contributor to these images, but one day and someday your going to grow up and realize that your actions have affected and deeply hurt the opposite displaying attraction!

This is what often "Births" the "playaz mentality"; far of being hurt, now I have had a rough life but nothing prepared me for heart break at the hands of a woman!
I could've been bitter, but I didn't, because from the start I knew who and what I was dealing with, I just chose to ignore it, but what if I didn't want to acknowledge the fact (like so many do), and chose to play on innocent unsuspecting hearts, would I be wrong?
Of course I would be wrong, because I'm seeking retribution from someone who had nothing to do with my problems or emotional state.
OK, now check this out, am I wrong for not giving the next woman a chance at my heart because of what another woman has done?
Or am I denying myself, my own happiness!

Now for those of you that haven't noticed, I'm taking shots at the female audience, why?
Because they harbour the most hate, and some don't even know it, now (lord and these women) know, the average male or any male from my point of view, aren't mind readers, but you expect us to be, claim you want our all, but you don't give your all, why; because you're stuck in the past claiming, or should I say, trying, to convince yourself that your moving forward, when you haven't and inside you hold resentment for every male you come across, because of one or two people, so the next man is held accountable for another's negligence, so basically he had no chance from the start!
So "you" deny yourself your own happiness, and then make excuses for your actions by telling yourself you can't find a good man because, we're intimidated by your success, or we're not comfortable with the fact that your independent, or we don't have what it takes to handle "real" women like yourselves, ladies "please"; cut that shit out, cause it gets no play with a "real" man, when you chase "boys" you get caught up in game, but when you pursue "men" you get the game!
Now understand that there are two types of men, which are man and man-kind, a man sets the trend and man-kind follows the trend, always understand that there is a difference and I know a lot of you understand the difference you just choose not to acknowledge it.

My point is this, take a chance to be given a chance, opportunity reveals its self daily, and stop being afraid to break standard, don't let the world determine your future, because it's your happiness and sanity as well as your well being at stake!

Now understand that this is my opinion, but I am stating facts in the midst of giving it. I opened this can of beans with plans on eating them, feel free to reply, to all of which who it applies.

No kapp....I feel ya on that bru. Lil Smoke Sum'n
You're right, it works both ways & we're all pretty rubbish (men and women) in the relationship stakes.

I've found the one thing I hold on to is that I refuse to let my past experiences change the person that I am. So single I remain haha

Thank you for sharing your thoughts, I enjoyed reading them :) 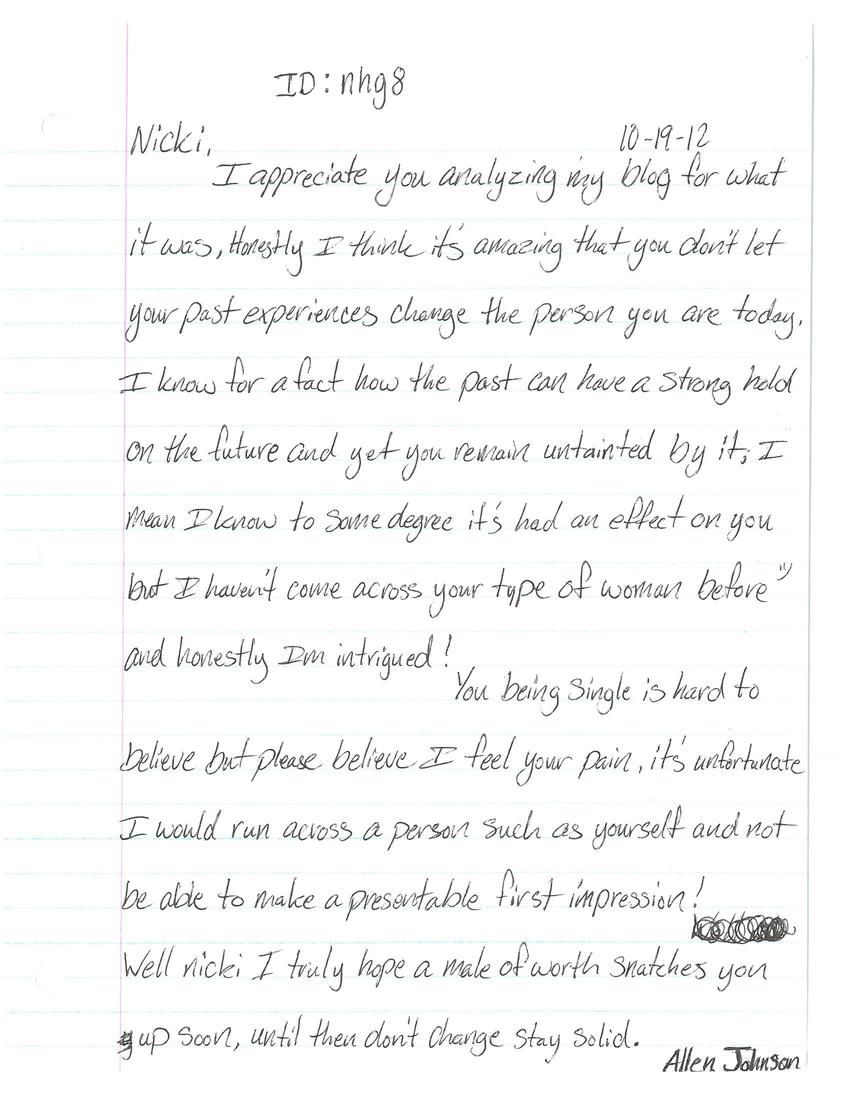 You're right, of course my past has had some influence on the person I am today (Mr Insightful :), but rather than allow negative experiences to change the person I am, I choose to remain conscious of them and how they influence my emotions today. And through that consciousness, I can manipulate my present & future to remain my true self.

& there is nothing wrong with the first impression you make Mr Johnson (Are we FLIRTING on BtB... that's a first! haha). Perhaps the difference you see in me in the way I speak is due to the fact that I'm not American. (You're very perceptive). 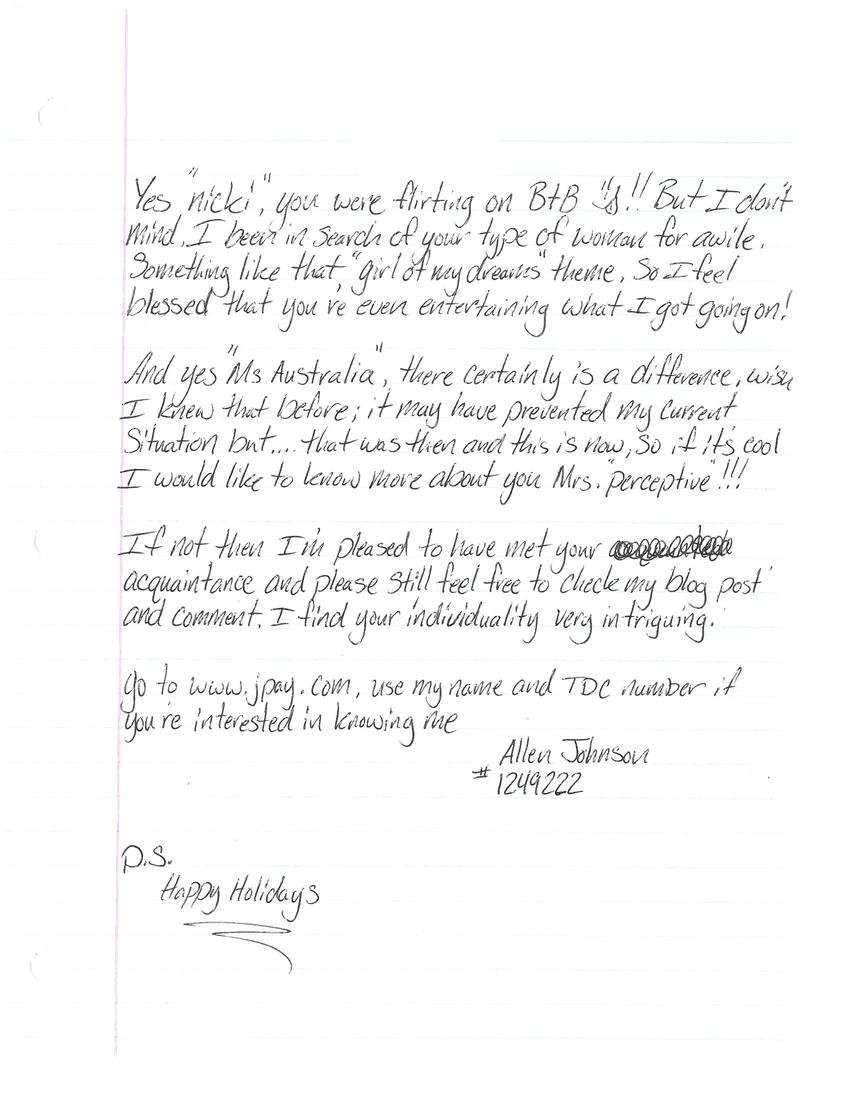 I just went and introduced myself to JPay, I had no idea what it was all about. I gave it the details it required about you, it made me join up, which I did, then told me I had to 'buy stamps' to send you an e-mail... So here I am back here haha.

I'm happy to correspond with you, and tell you more about me (even though I came here to learn more about others, not so much to talk about myself) but I cannot be the 'girl of your dreams'. Nice try though :D

Anybody besides me see a problem here?
This is NOT the true picture of Nicki. For whatever reasons (I won't even guess) he/she has decided to make herself a bleeding heart.

People like Nicki want attention from men who have few choices. Let me digress... if YOU, some incarcerated (lifer or death row), got comm from someone like Nicki who purports to be studying criminology and psychology (along with juggling being a single parent and job holder) your light bulb might go off. *attorney* comes to mind.

While I agree that this medium MAY reach someone who MIGHT make a difference, the odds are against you.

That being said..since my interest in this website, I have taken a certain interest in a few cases. My actions are noted by those.
My help is DOCUMENTED. Should the need arise, I can and will provide proof of my contribution to the "death row inmates". My small contributions to individual inmates meets my code. As I stated before, I pay the phone bill (monthly) to ensure he talks with his family. Without my assistance they could not communicate. BLEEDING HEARTS (nicki) is NOT going to change certain inmates. The ONES who have a chance for parole and who YOU can help should be on your front burner.

My decision to advocate has as much to do with the crime as it has to do with the defendant. I think Mr. Marcus Rogers should be paroled and I think his re-entry into society would be graceful.
Please, anyone with *different* or amended docs pls leave a message.

I AM in the process of a scrutiny re: this case.

I will post the positive vs the negative.
Hahahaha...

I have been attempting to ensure Allen that I'm really not all that interesting, then you come along and advise us both that you've created a spreadsheet!?!! On ME and the comments I leave on Btb... That is the funniest thing I've possibly ever heard. Perhaps I am incredibly interesting after all :D

I guess I can respect the fact that you may find me fascinating enough to study. I am after all the person that believes everyone on this planet has something they can teach us. I guess I must admit I find your consistent negativity and personal attacks on me, and other bloggers, somewhat interesting even though it's opposite to the way I choose to travel through life. I would just find that continuous level of pessimism exhausting.

Perhaps if Allen wants to take a short cut in getting to know more about me, you could send him a copy of that spreadsheet :D As far as your constant concern with my time management goes, I spend every waking moment constructively (That’s my secret). I come here in my quiet moments to reflect, to offer support to those that I feel need it most. You may be pleased to hear SAH that my time here on Btb is not altogether altruistic. I take strength from the stories shared on this site. When I think I'm doing it tough, these people remind me that I have nothing to complain about in the big picture.
Thanks for writing! I finished the transcription for your post.