Why Not Give a Brother Locked Up a Chance? 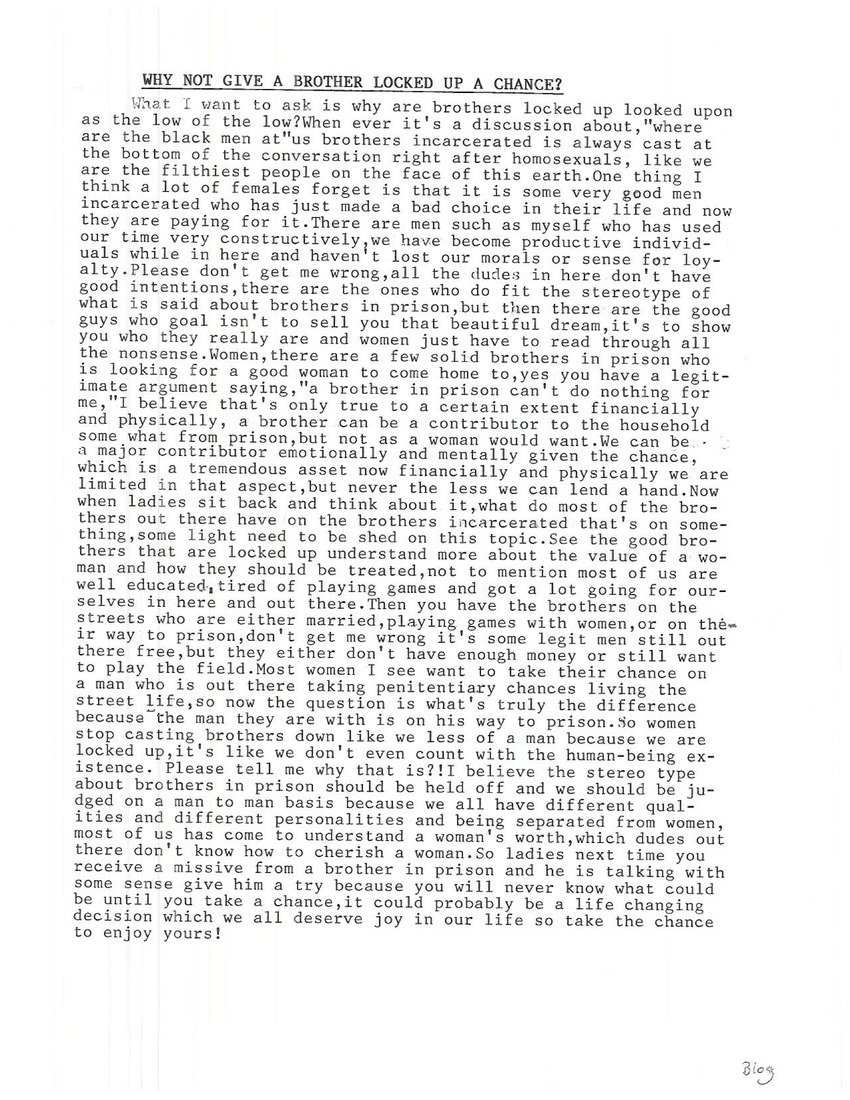 WHY NOT GIVE A BROTHER LOCKED UP A CHANCE?

What I want to ask is why brothers locked up looked upon as the low of the low? Whenever it's a discussion about, "where are the black men at?" us brothers incarcerated is always cast at the bottom of the conversation right after homosexuals, like we are the filthiest people on the face of this earth. One thing I think a lot of females forget is that it is some very good men incarcerated who has just made a bad choice in their life and now they are paying for it. There are men such as myself who has used our time very constructively, we have become productive individuals while in here and haven't lost our morals or sense for loyalty. Please don't get me wrong, all the dudes in here don't have good intentions, there are the ones who do fit the stereotype of what is said about brothers in prison, but then there are the good guys who's goal isn't to sell you that beautiful dream, it's to show you who they really are and women just have to read through all the nonsense. Women, there are a few solid brothers in prison who is looking for a good woman to come home to, yes, you have a legitimate argument saying, "a brother in prison can't do nothing for me", I believe that's only true to a certain extent financially and physically, a brother can be a contributor to the household somewhat from prison, but not as a woman would want. We can be a major contributor emotionally and mentally given the chance, which is a tremendous asset now financially and physically we are limited in that aspect, but never the less we can lend a hand. Now when ladies sit back and think about it, what do most of the brothers out there have on the brothers incarcerated that's on something, some light need to be shed on this topic. See the good brothers that are locked up understand more about the value of a woman and how they should be treated, not to mention most of us are well educated, tired of playing games and got a lot going for ourselves in here and out there. Then you have the brothers on their way to prison, don't get me wrong it's some legit men still want there free, but they either don't have enough money or still want to play the field. Most women I see want to take their chance on a man who is out there taking penitentiary chances living the street life, so now the question is what's truly the difference because the man they are with is on his way to prison. So women stop casting brothers down like we less of a man because we are locked up, it's like we on't even count with the human-being existence. Please tell me why that is?! I believe the stereotype about brothers in prison should be held off and we should be judged on a man to man basis because we all have different qualities and different personalities and being separated from women, they don't know how to cherish a woman. So ladies next time you receive a missive from a brother in prison and he is talking with some sense give him a try because you will never know what could be until you take a chance, it could probably be a
life changing decision which we all deserve joy in our life so take the chance to enjoy yours!