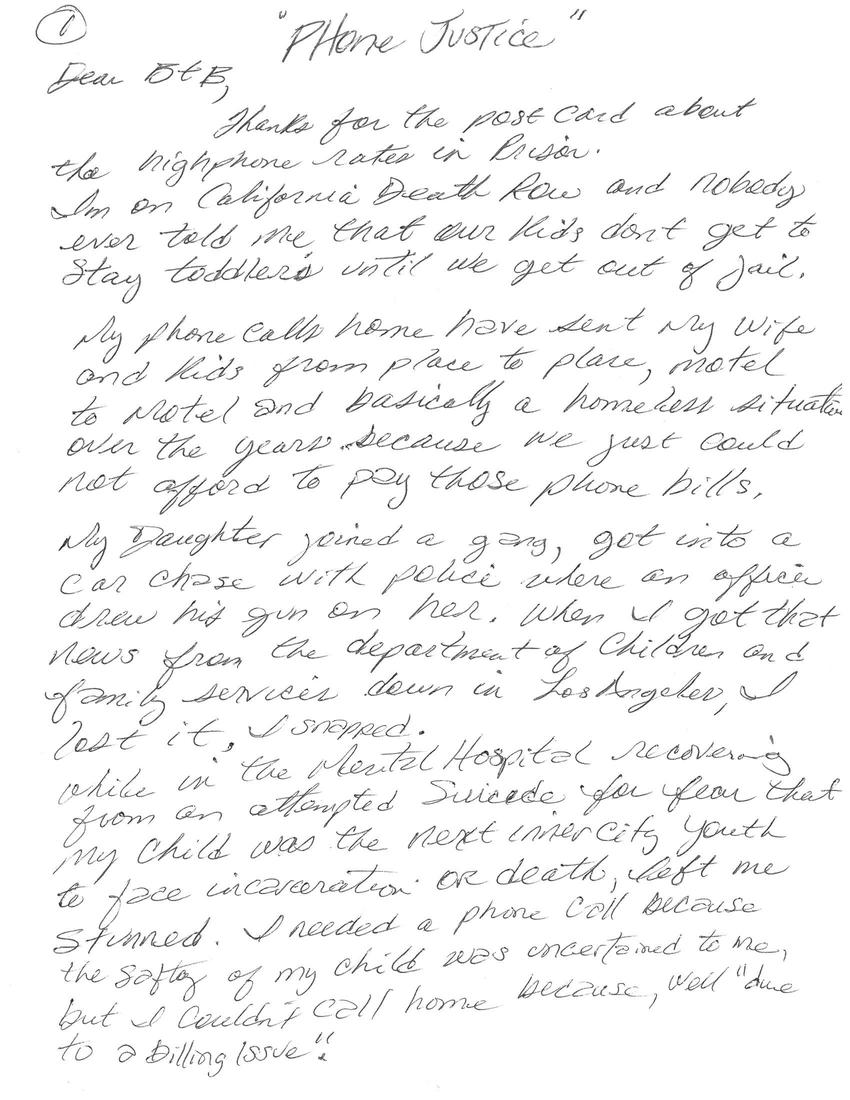 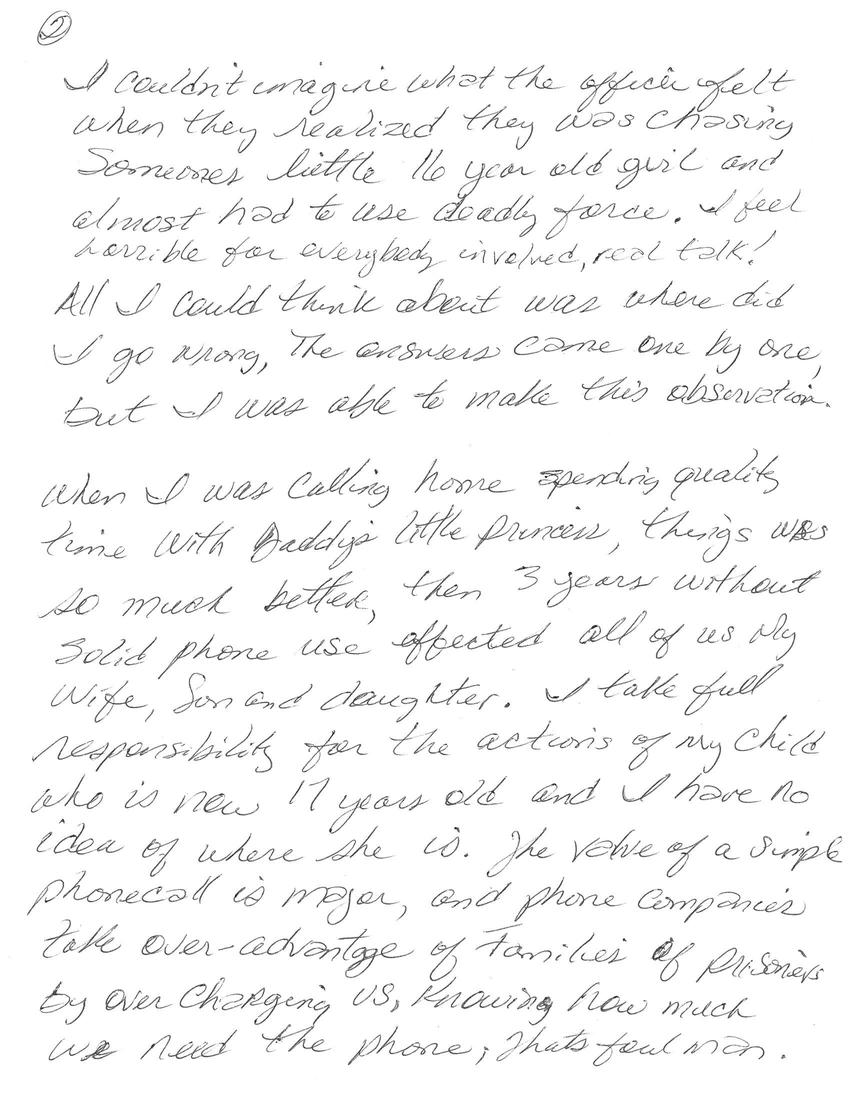 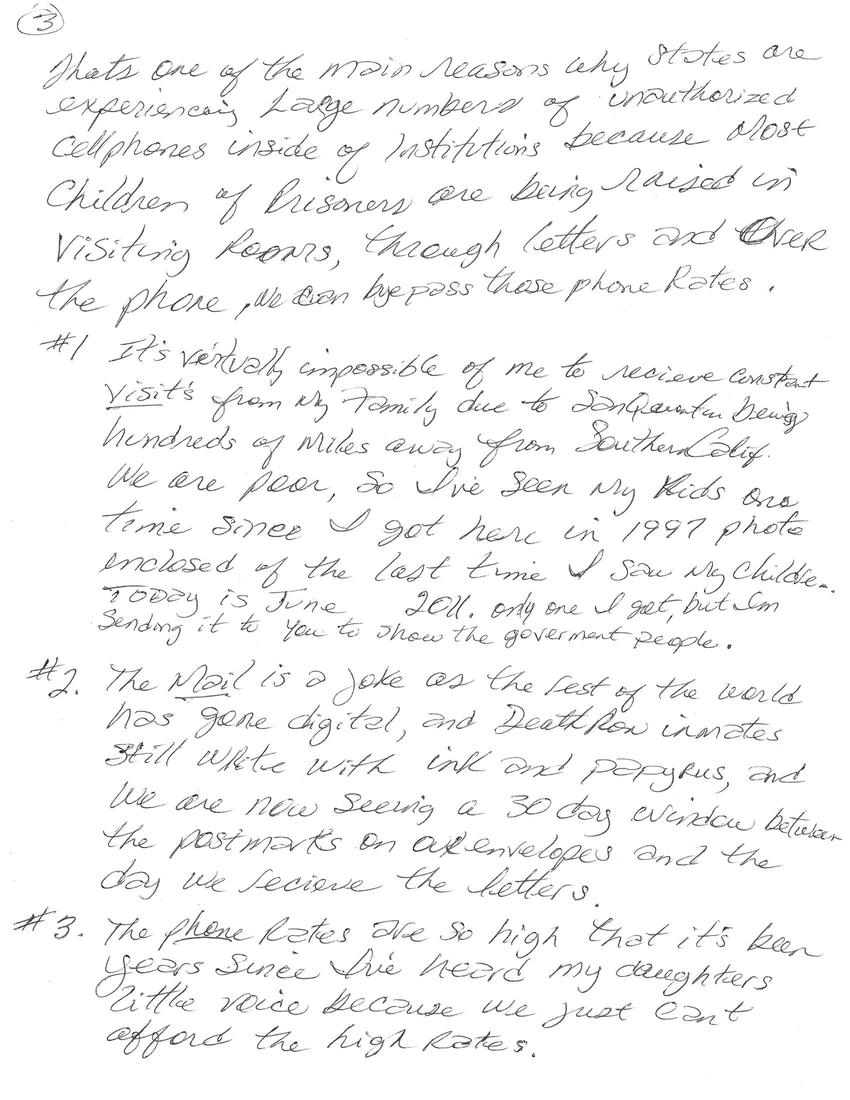 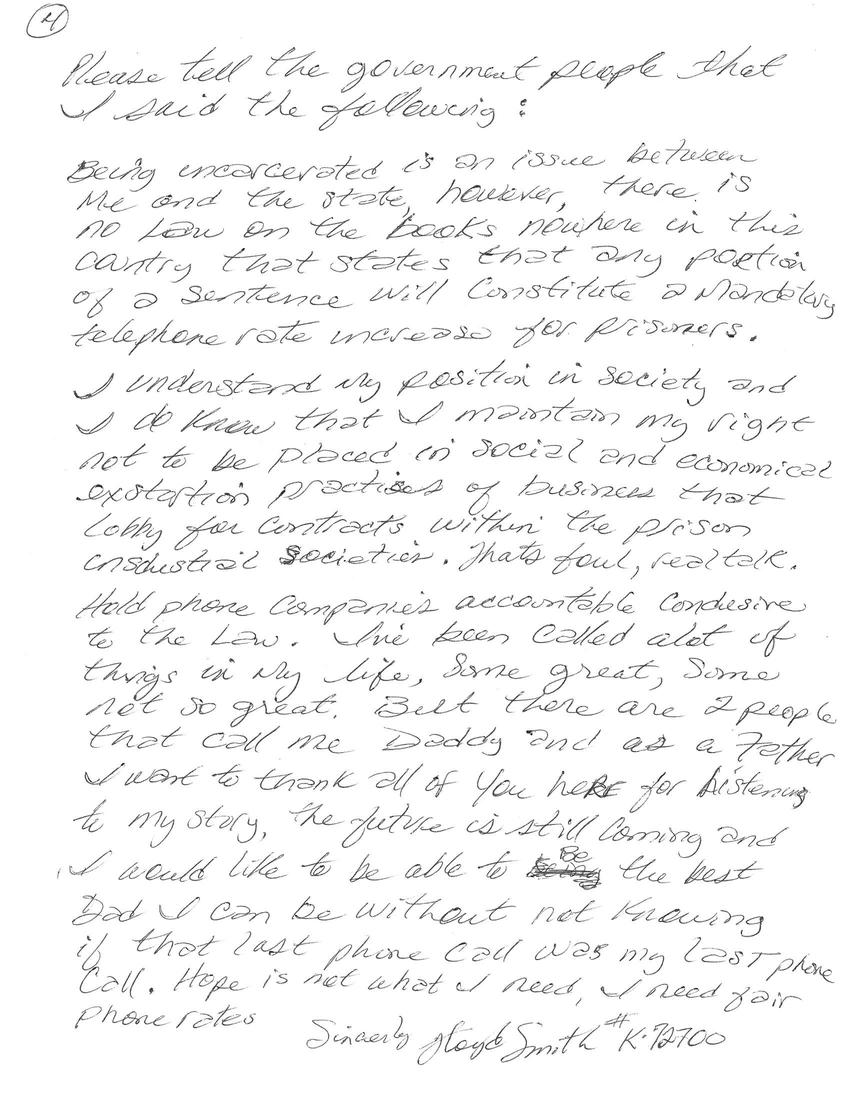 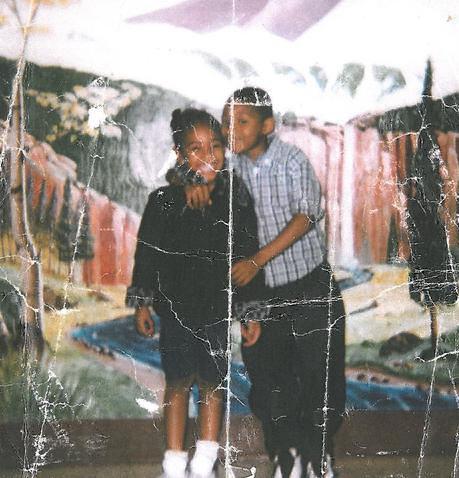 Dear B+B,
Thanks for the postcard about the high phone rates in prison.

I'm on California Death Row and nobody ever told me that our kids don't get to stay toddlers until we get out of jail.

My phone calls home have sent my wife and kids from place to place, motel to motel and basically a homeless situation over the years because we just could not afford to pay those phone bills.

My daughter joined a gang, got into a car chase with police where an officer drew his gun on her. When I got that news from the Department of Children and Family Services down in Los Angeles, I lost it, I snapped.

While in the mental hospital recovering from an attempted suicide for fear that my child was the next inner-city youth to face incarceration or death, left me stunned. I needed a phone call because the safety of my child was uncertain to me, but I couldn't call home because, well, "due to a billing issue."

I couldn't imagine what the officer felt when they realized they was chasing someone's little 16 year old girl and almost had to use deadly force. I feel horrible for everybody involved, real talk. All I could think about was where did I go wrong, the answers came one by one, but I was able to make this observation.

When I was calling home spending quality time with Daddy's little princess, things was so much better, then 3 years without solid phone use effected all of us, my wife, son and daughter. I take full responsibility for the actions of my child who is now 17 years old and I have no idea where she is. The value of a simple phone call is major, and phone companies take over-advantage of families of prisoners by overcharging us, knowing how much we need the phone, that's foul man.

That's one of the main reason why states are experiencing large numbers of unauthorized cell phones inside of institutions because most children of prisoners are being raised on visiting rooms, through letters and over the phone. We can bypass those phone rates.

#1. It's virtually impossible of me to receive constant visits from my family due to San [illegible] being hundreds of miles away from Southern California. We are poor, so I've seen my kids one time since I got here in 1997 (photo enclosed of the last time I saw my children). Today is June __ 2011. Only one I get, but I'm sending it to you to show the government people.

#2. The mail is a joke as the rest of the world has gone digital, and Death Row inmates still write with ink and papyrus, and we are now seeing a 30 day window between the post marks on our envelopes and the day we receive the letters.

#3. The phone rates are so high that it's been years since I've heard my daughters little voice because we just can't afford the high rates. Please tell the government people the following:

Being incarcerated is an issue between me and the state, however, there is no law on the books nowhere in this country that states that any [illegible] of a sentence will constitute a mandatory telephone rate increase for prisoners.

I understand my position in society and I do know that I maintain my right now to be placed in social and economical extortion practices of business that lobby for contract within the prison industrial societies. That's foul, real talk.

Hold phone companies accountable [illegible] to the law. I've been called a lot of things in my life, some great, some not so great. But there are 2 people that call me Daddy and as a father I want to thank all of you here for listening to my story, the future is still coming and I would like to be able to be the best Dad I can be without not knowing if that last phone call was my last phone call. Hope is not what I need, I need fair phone rates.

[Picture is a wrinkled Polaroid of two smiling African-American children, a girl and a boy. The boy is taller and a bit older, with his arm around his sister's shoulder. Underneath the image is written "The Reason-"]