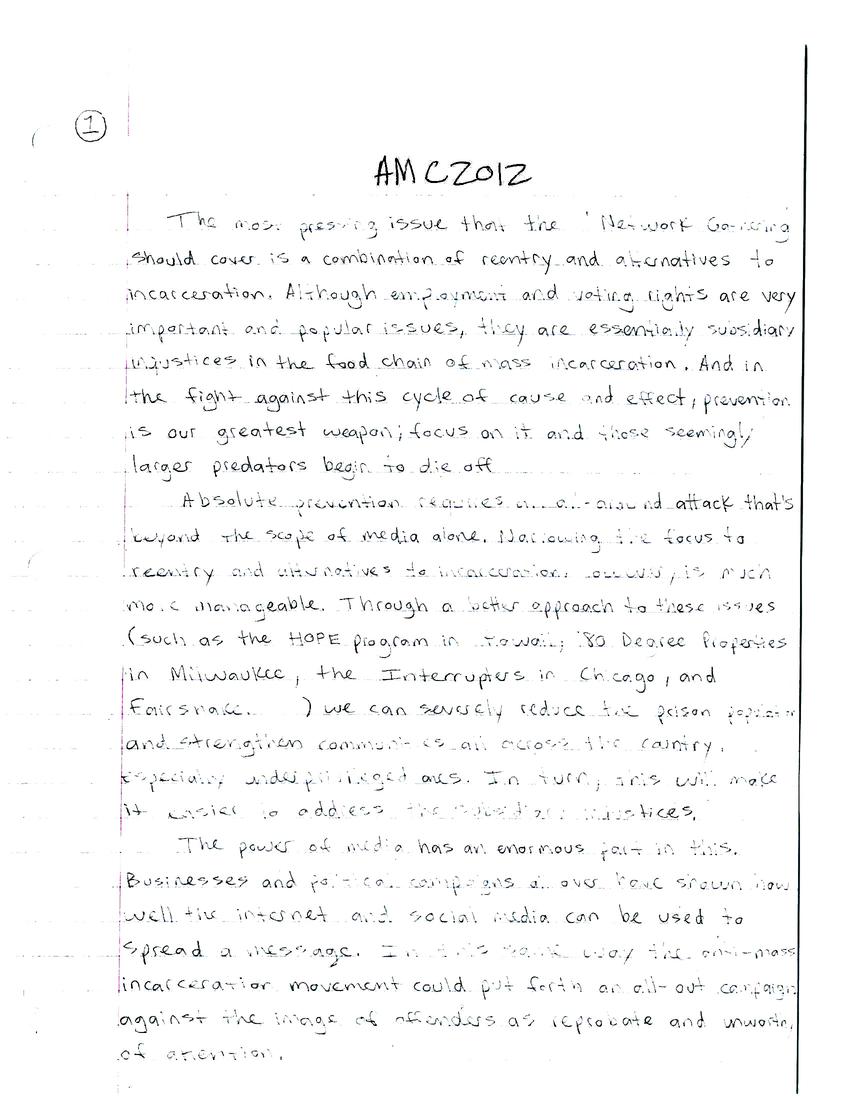 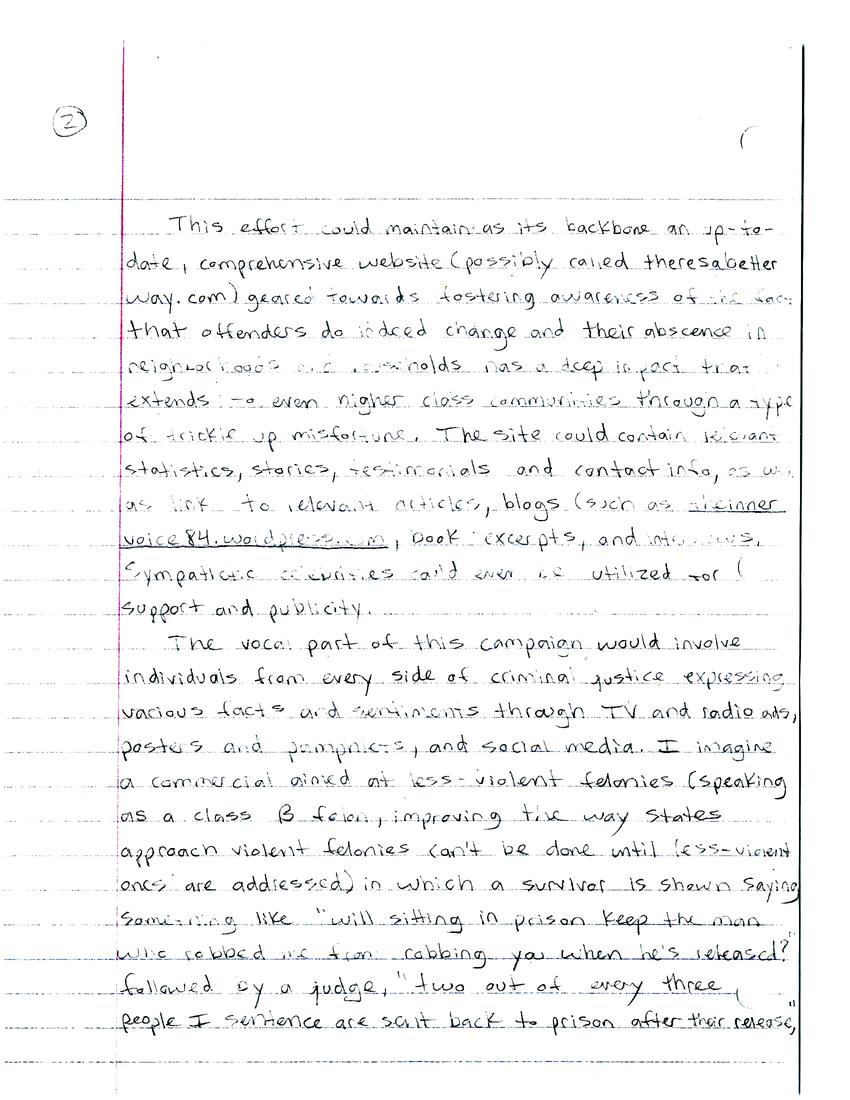 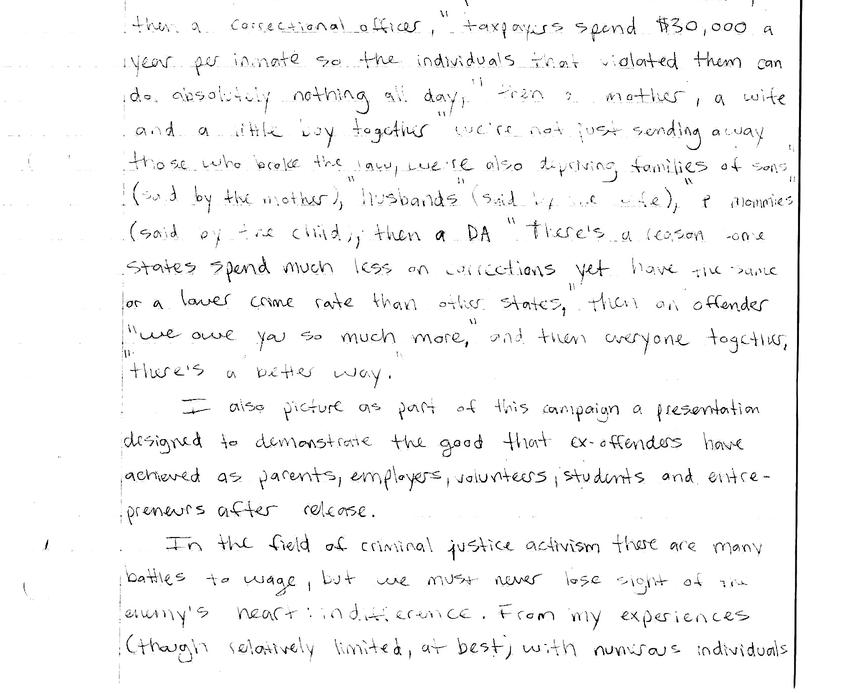 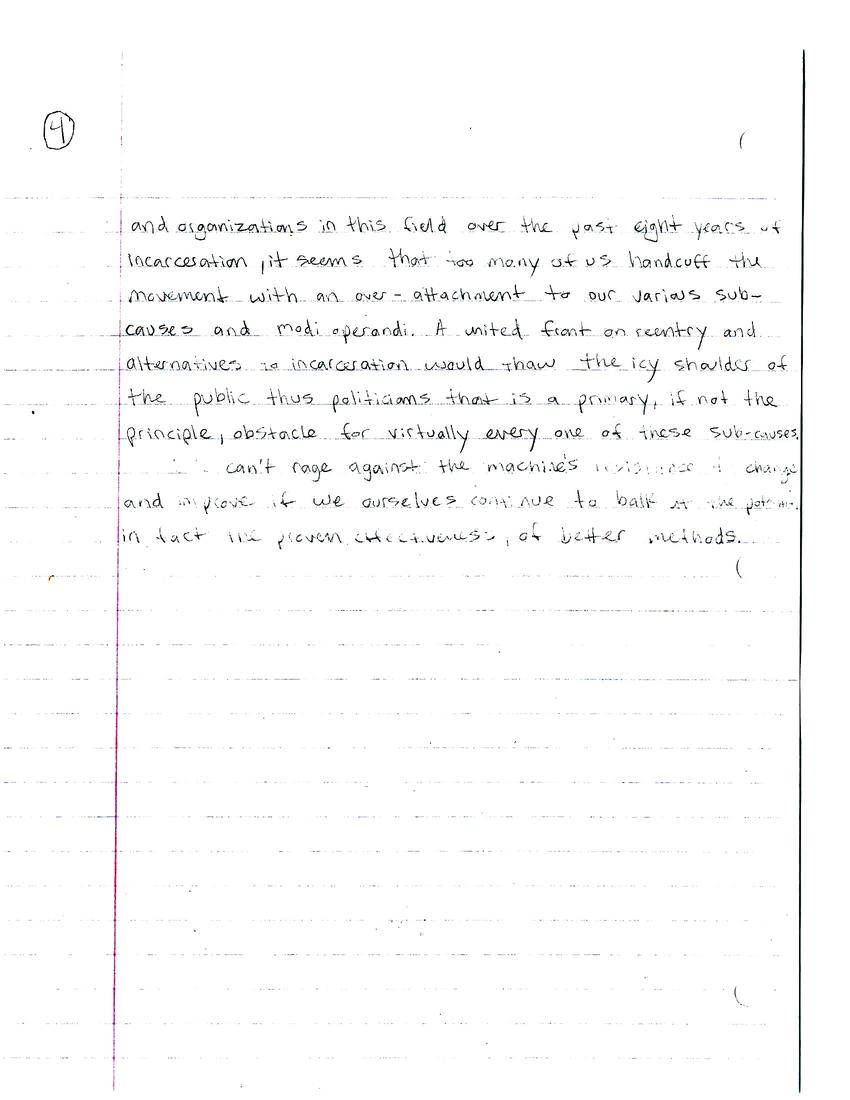 The most pressing issue that the "Network Gathering" shouldcover is a combination of re-entry and alternatives to incarceration. Although employment and voting rights are very important and popular issues, they are essentially subsidiary injustices in the food chain of mass incarceration. And in the fight against this cycle of cause and effect, prevention is our greatest weapon; focus on it and those seemingly larger predators begin to die off.

Absolute prevention requires an all around attack that's beyond the scope of media alone. Narrowing the focus to re-entry and alternatives to incarceration, however is much more manageable. Through a better approach to these issues (such as the HOPE program in ..towall,:80 degree properties in Milwaukee, the Interrupters in Chicago, and Fairscape) we can severely reduce the prison population and strengthen communities all across the country, especially undrprovilaged ones. In turn, this will make it easier to address the ---------- injustices.

The power of media has an enormous part in this. Businesses and poltical campiagns all over have shown how well the inernet and social media can be used to spread a message. In the same wa the only- mass incarceration movement could put forth an all-out campaign against the image of offenders as reprobate and unworthy of attention.

This effort could maintain as its backbone an up-to-date, comprehensive website (possibly) called theresabetter way.com) geared towards fostering awareness of the fact that offenders do indeed chage and their absence in neighbourhoods and households has a deep impact that extends into even higer class communities through a type of trickie up misfortune. The site could contain recent statistics, stories, testimonials and contact information, as ---as link---to relevant articles, blogs (such as theinnervoice84.wordpress.com, book excerpts, and interviews, sympatictic celebrities coulde ven be utilized for support and publicity.

The vocal part of this campiagn would involve individuals form evey side of criminal hjustice expressing various facts and sentiments through TV and radio ads, posters an pamphlets, and social media. I imagine a commercial aimed at less-violent felonies (speaking as a class B felon, inmproving the way states approach violent felonies can't be done until less-violent ones are addressed) in which a survivor is shpown saying something like "will sitting in prison keep the man who robbed me frm robbing you when he's released?" followed by a judge, "two out of every three people I sentence are sent back to prison after their release", then a correctional officer, "taxpayers spend $30,000 a year per inmate so the individuals that violated them can do absolutely nothing all day," then a mother, a wife and a little boy together "we're not just sending away those who broke the law, we're also depriving families of sons"! (said by the mother), "husbands" (said by the wife), "and mommies" (said by the child), then a DA "there's a reeaon some states spend much less on corrections yet have the same or a lower crime rate than other states," then an offender "we ove you so much more," and then everyone together, "there's a better way."

I also picture as part of this campaign a presentation designed to demonstrate the good that ex-offenders have achieved as parents, employers, volunteers, students and entre=preneurs after release.

In the field of criminal justice activism there are many battles to wage, but we must never lose sight of the enemy's heart: indifference. From my experiences (though relatively limited, at best) with numerous individuals and organisations in this field over the past eight years of incaceration, it seems that too many of us handcuff the movement with an over-attachment to our various sub-causes and modi operandi. A united front on re-entry and alternatives to incarceration would throw the icy shoulder of the public thus politcians that is a primary, if not the principle, obstacle for vitually everyone of these sub-causes,we can't rage against the machine's resistance of change and improve if we ourselves continue to balk at the poential in fact the proven effectiveness, of better methods.