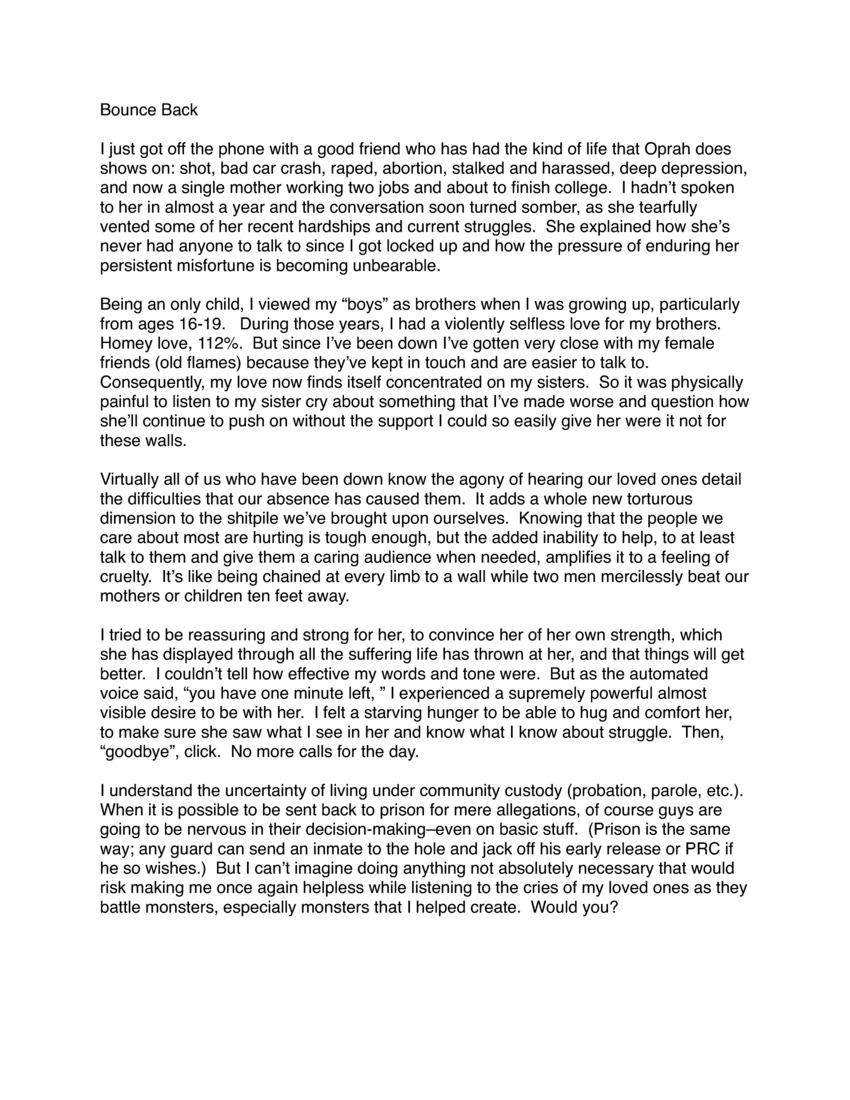 I just got off the phone with a good friend who has had the kind of life that Oprah does shows on: shot, bad car crash, raped, abortion, stalked and harassed, deep depression, and now a single mother working two jobs and about to finish college. I hadn't spoken to her in almost a year, and the conversation soon turned sombre, as she tearfully vented some of her recent hardships and current struggles. She explained how she's never had anyone to talk to since I got locked up, and how the pressure of enduring her persistent misfortune is becoming unbearable.

Being an only child, I viewed my "boys" as brothers when I was growing up, particularly from ages 16-19. During those years, I had a violently selfless love for my brothers. Homey love, 112%. But since I've been down I've gotten very close with my female friends (old flames) because they've kept in touch and are easier to talk to. Consequently, my love now finds itself concentrated on my sisters. So it was physically painful to listen to my sister cry about something that I've made worse and question how she'll continue to push on without the support I could so easily give her were it not for these walls.

Virtually all of us who have been down know the agony of hearing our loved ones detail the difficulties that our absence has caused them. It adds a whole new torturous dimension to the shitpile we've brought upon ourselves. Knowing that the people we care about most are hurting is tough enough, but the added inability to help, at least talk to them and give them a caring audience when needed, amplifies it to a feeling of cruelty. It's like being chained at every limb to a wall while two men mercilessly beat our mothers or children ten feet away.

I tried to be reassuring and strong for her, to convince her of her own strength, which she has displayed through all the suffering life has thrown at her, and that things will get better. I couldn't tell how effective my words and tone were. But as the automated voice said 'you have one minute left', I experienced a supremely powerful, almost visual desire to be with her. I felt a starving hunger to be able to hug and comfort her, to make sure she saw what I see in her and know what I know about struggle. Then, 'goodbye', click. No more calls for the day.

I understand the uncertainty of living under community custody (probation, parole etc). When it is possible to be sent back to prison for mere allegation, of course guys are going to be nervous in their decision making - even on basic stuff. (Prison is the same way: any guard can send an inmate to the hole and jack off his early release or PRC if he so wishes). But I can't imagine doing anything not absolutely necessary that would risk making me once again helpless while listening to the cries of my loved ones as they battle monsters, especially monsters that I helped create. Would you?

Sorry about everything your friend has been through. God bless you for being such a good friend to her. Perhaps she can come visit you so you can support her in person.