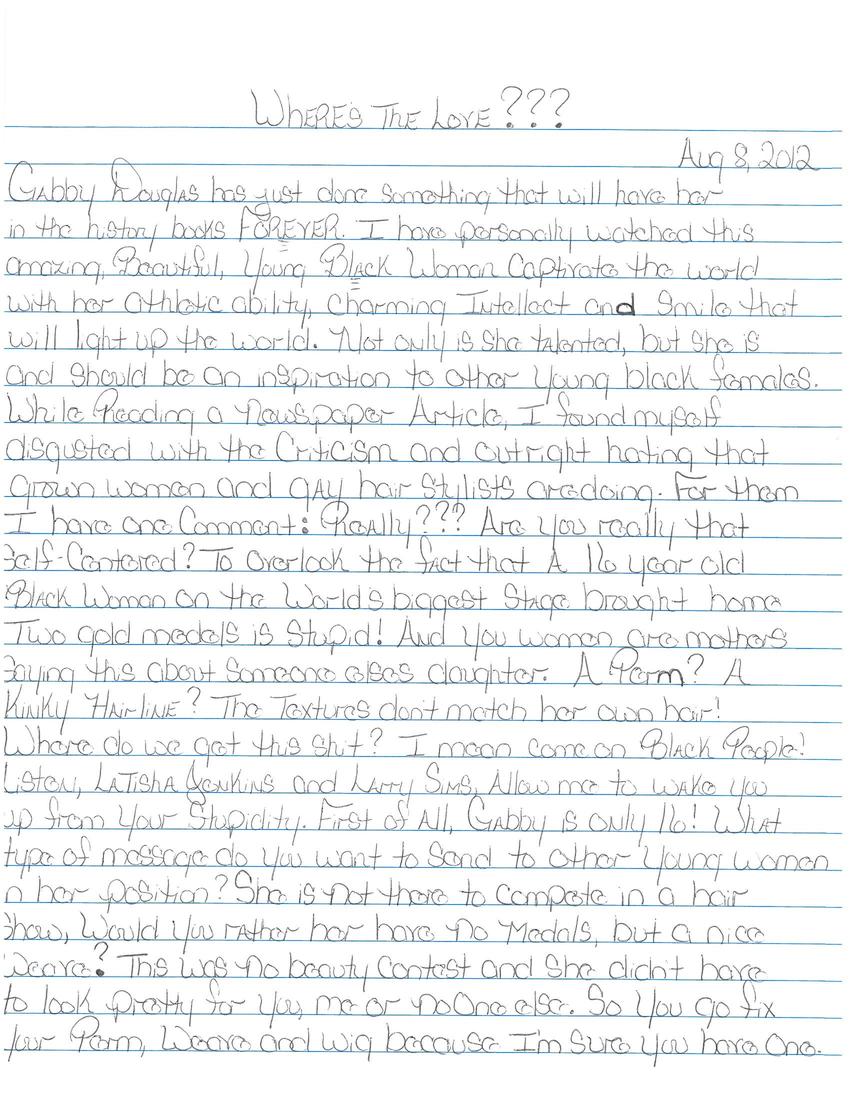 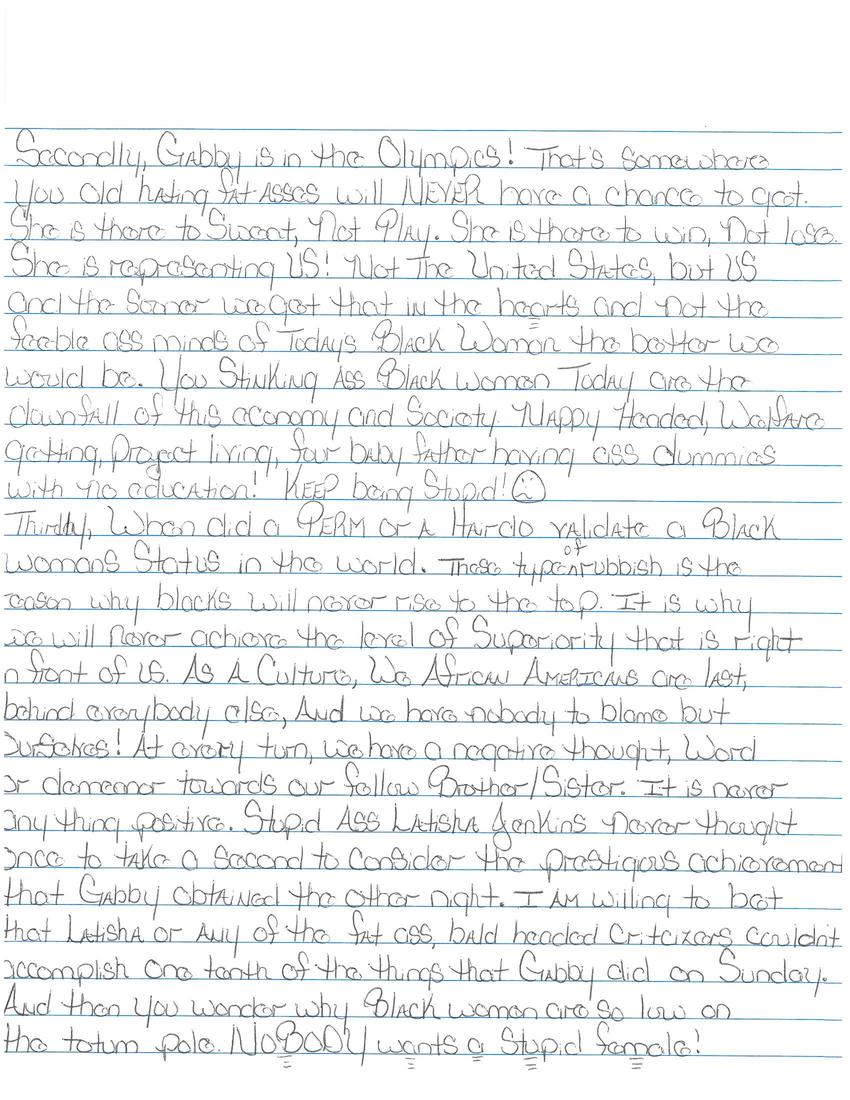 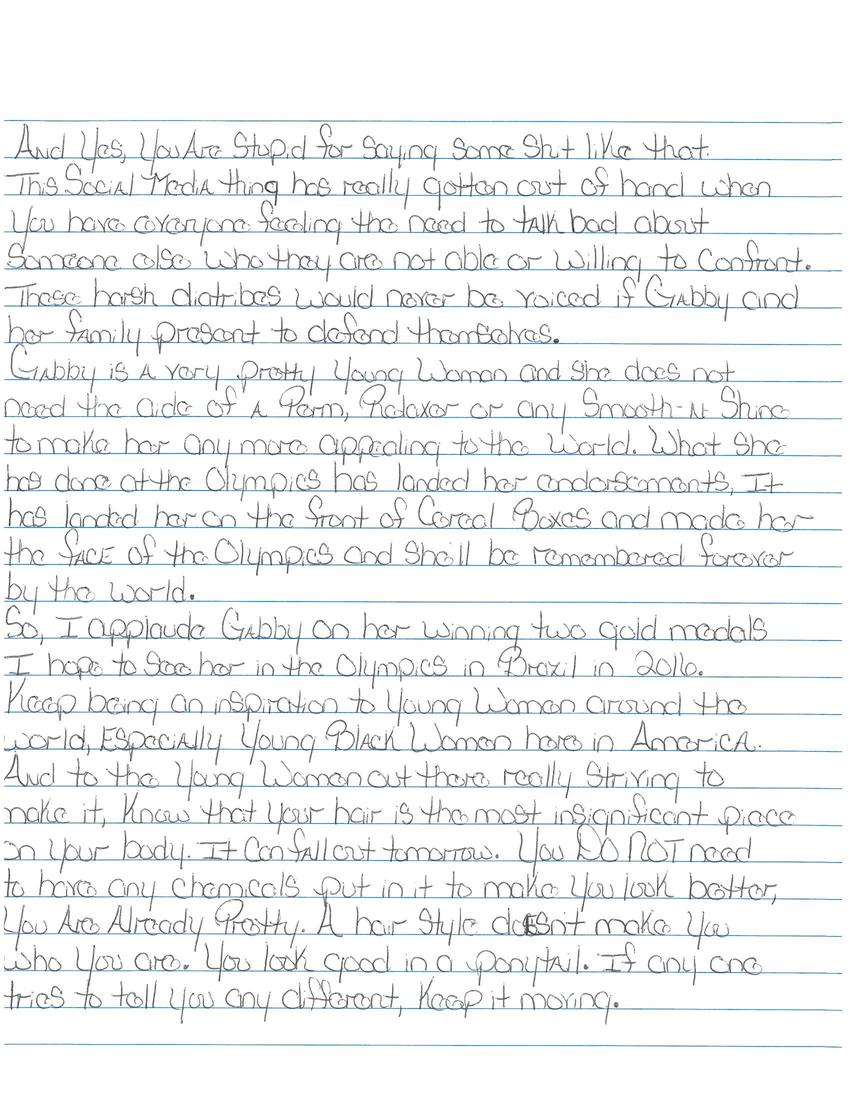 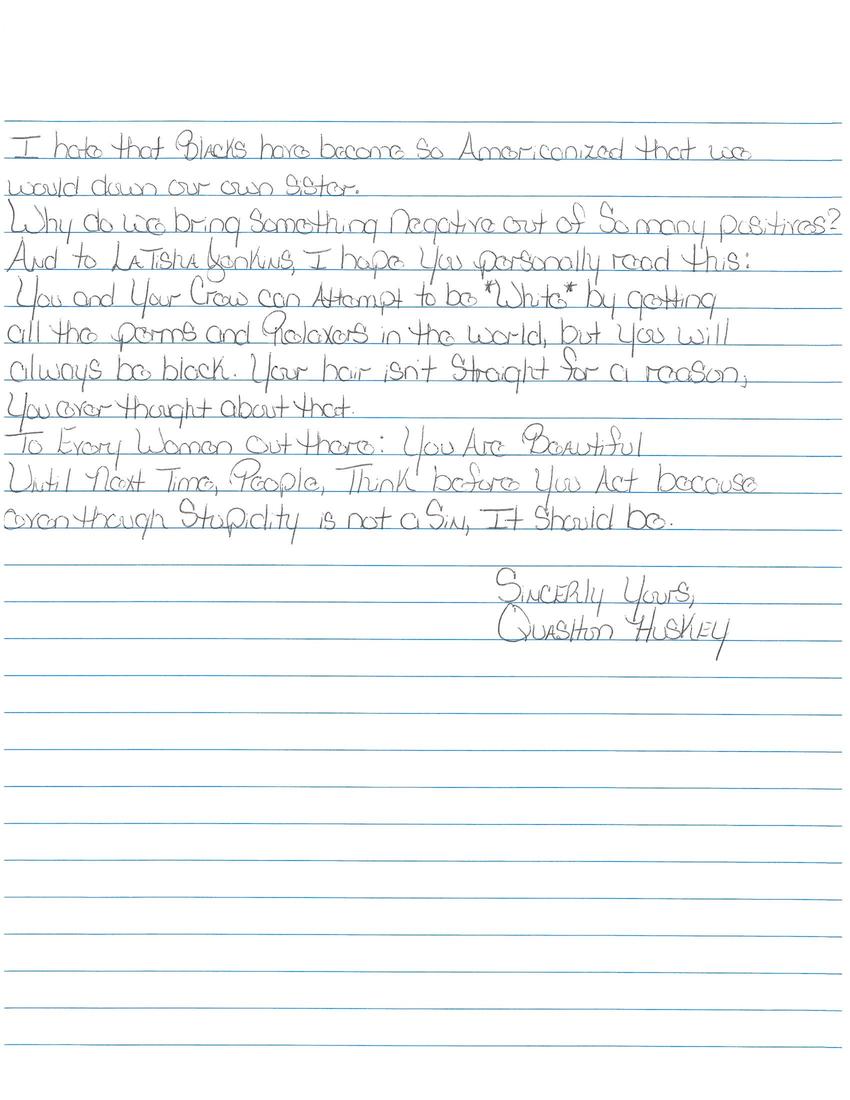 Gabby Douglas has just done something that will have her in the history books forever. I have personally watched this amazing, beautiful, young black woman captivate the world with her athletic ability, charming intellect, and a smile that will light up the world. She is talented, and she should be an inspiration to other young black ladies.

While reading a newspaper article, I found myself disgusted with the criticism and outright hating that grown women and gay hair stylists are doing. For them, I have one comment: really? Are you really that self-centered?

To overlook a fact that a 16-year-old black woman on the world's biggest stage brought home two gold medals is stupid! And you women are mothers saying this about someone else's daughter.

A perm? A kinky hairline? The textures don't match her own hair? Where do we go with this shit? I mean, come on, black people!

Listen, Latisha Jenkins and Larry Sims, allow me to wake you up from your stupidity.

First of all, Gabby is only 16! What type of message do you want to send to other young women in her position? She is not there to compete in a hair show. Would you rather her have a nice hair weave but no medals? This was no beauty contest, and she didn't have to look pretty for you, me, or anybody else. So, you go fix your perm weave and wig because I'm sure you have one.

Secondly, Gabby is in the Olympics! That's somewhere you old hating fatasses will NEVER have a chance to get. She is there to sweat, not play. She is there to win, not lose. She is representing the US! Not the United States, but US! And the sooner we get that in the hearts (not the feeble minds) of today's black women, the better we would be.

You stinking ass black women today are the downfall of this economy and society. Nappy headed, welfare getting, project living, four baby father having, ass dummies with no education! Keep being stupid!

Thirdly, When did a perm or a hairdo validate a black woman's status in the world? That type of rubbish is the reason why blacks will never rise to the top. It is why we will never achieve the level of superiority that is right in front of us.

As a culture, we African-Americans are last—behind everybody else. We have nobody to blame but ourselves! At every turn, we have a negative thought, word, or demeanor towards our fellow brothers and sisters. It is never anything positive.

Stupid ass Latisha Jenkins never thought to take a second to consider the prestigious achievement that Gabby obtained the other night. I am willing to bet that Latisha or any of the fatass, bald-headed criticizers couldn't accomplish one tenth of the things that Gabby did on Sunday. And then you wonder why black women are so low on the totem pole. NOBODY wants a stupid female!

And yes, you are stupid for saying some shit like that.

This social media thing has really gotten out of hand, when you have everyone feeling the need to talk bad about someone else. About who they are not able or willing to confront. Those harsh diatribes would never be heard if Gabby and her family were present to defend themselves.

Gabby is a very pretty young woman, and she does not need the aid of a perm, relaxer, or any smooth and shine to make her anymore appealing to the world. What she has done at the Olympics has landed her endorsements, the front of cereal boxes. She made herself the face of the Olympics, and she'll be remembered forever by the world.

So, I applaud Gabby on her winning two gold medals. I hope to see her in the Olympics in Brazil in 2016. Keep being an inspiration to young women around the world, especially young black women here in America.

And to the young women out there, really striving to make it, know that your hair is the most insignificant piece on your body. It can fall out tomorrow. You DO NOT need to have any chemicals put in it to make you look better. You are already pretty. A hairstyle doesn't make you who you are. You look good in a ponytail. If anyone tries to tell you any different, keep it moving.

I hate that blacks have become so Americanized that we would down our own sisters. Why do we bring something negative out of so many positives?

And to Latisha Jenkins, I hope you personally read this:
You and your crow can attempt to be white by getting all the perms and relaxers in the world, but you will always be black. Your hair isn't straight for a reason. You ever thought about that?

To every woman out there: You are beautiful.

Until next time, people. Think before you act because, even though stupidity is not a sin, it should be.

People will say stupid things (I'm sure you must have noticed that before) haha. Here in Australia we had quite a bit of negative, ignorant press comments made during the Olympics also (mostly about how our athletes weren't winning a lot of gold). It's always easy for others to look for a negative & although I don't know the athlete you're speaking of... just the fact that she has risen to the top and is able to represent your country on the International stage, unfortunately makes her a target for those more in touch with their own insecurities than the incredible achievements of others.

You shouldn't get so upset... the things people say, are a reflection of their own self image and say more about themselves and their own insecurities, than about those people they're aiming their comments at.

You have every right to be proud of your race... the rest of the world sees you as a strong people who endured and fought relentlessly for your freedoms & this young athlete is testament to that courage.
(scanned reply – view as blog post)
uploaded Oct. 28, 2012.  Original (PDF) 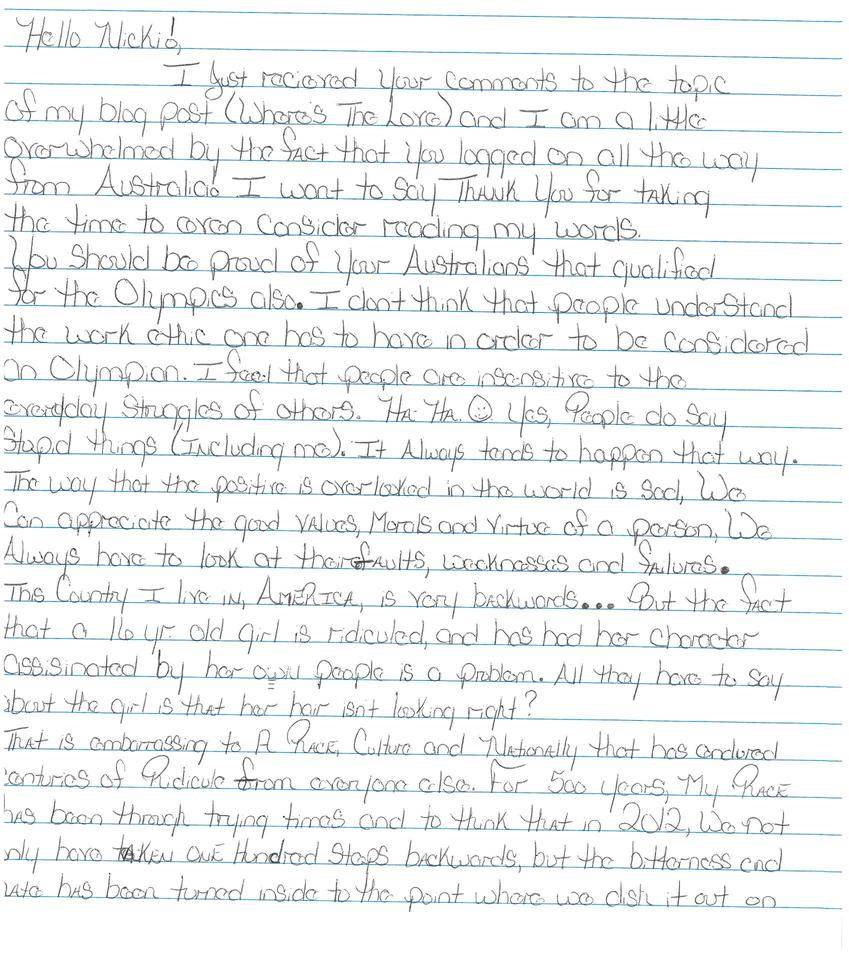 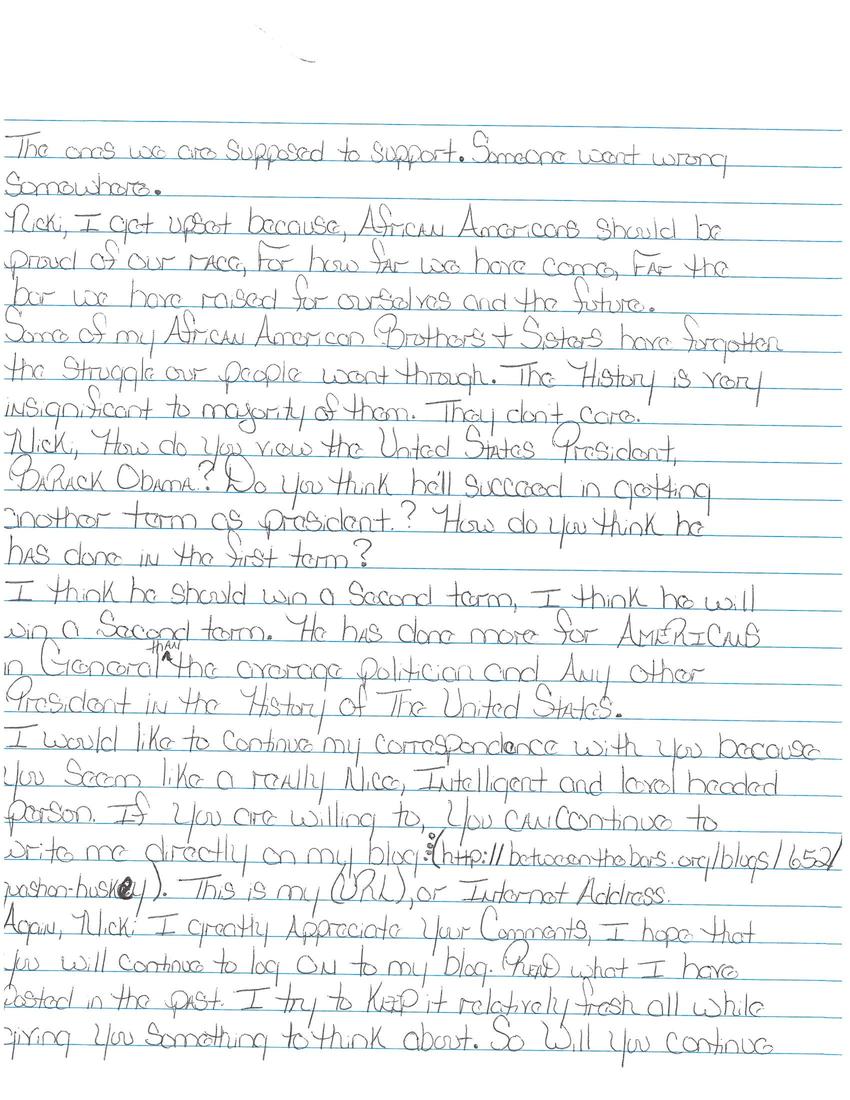