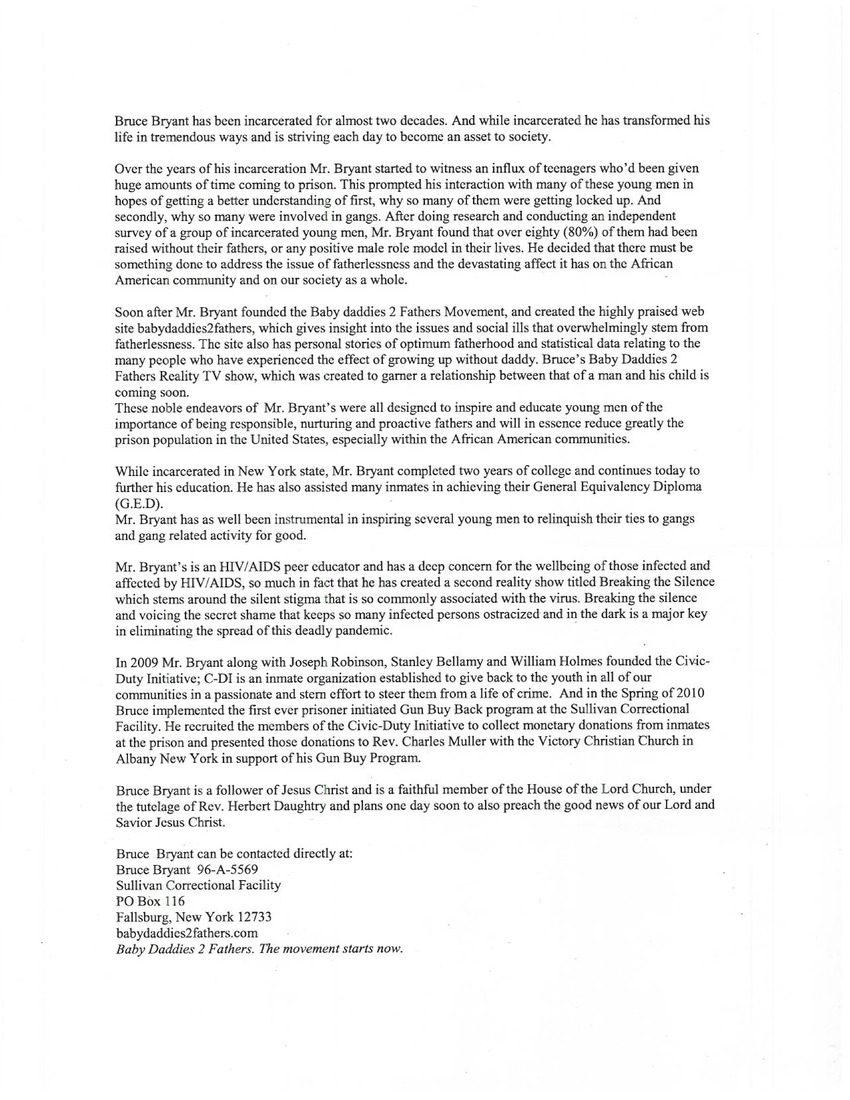 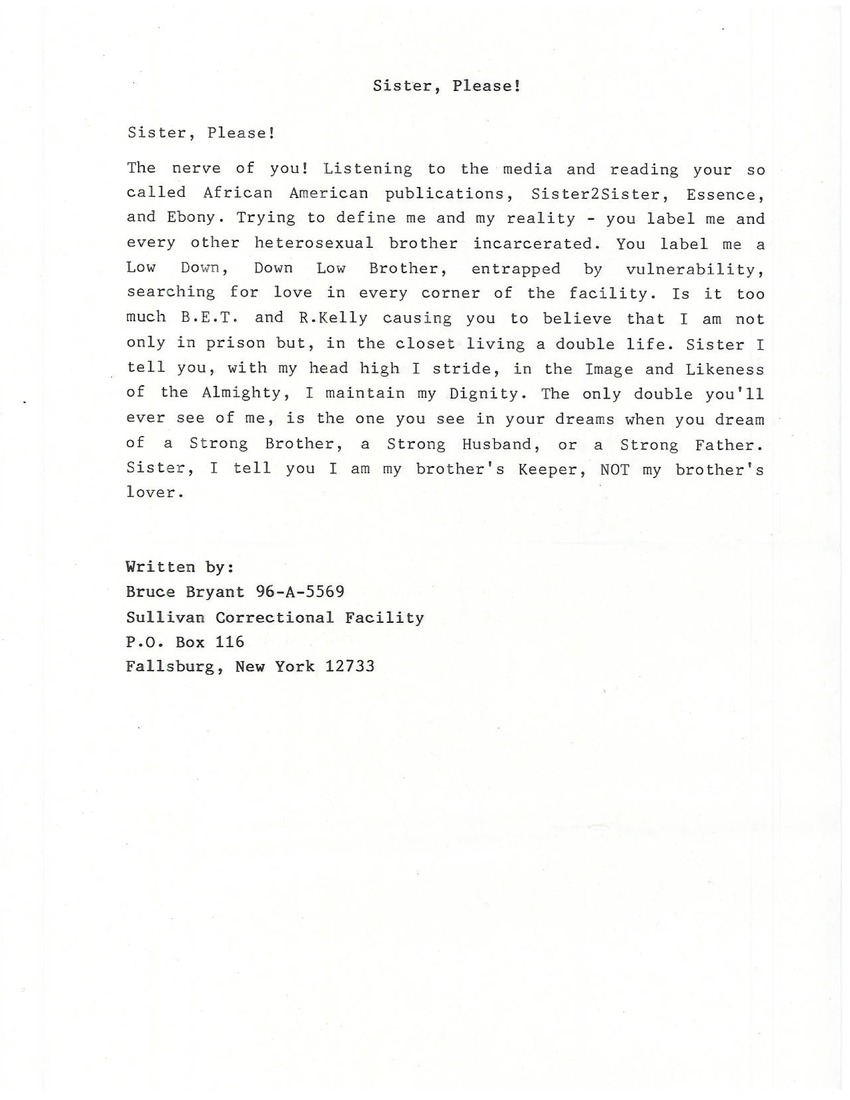 Bruce Bryant has been incarcerated for almost two decades. And while incarcerated he has transformed his life in tremendous ways and is striving each day to become an asset to society.

Over the years of his incarceration Mr. Bryant started to witness an influx of teenages who'd been given huge amounts of time coming to prison. This prompted his interaction with many of these young men in hopes of getting a better understanding of first, why so many of them are getting locked up, and secondly, why so many were involved in gangs. After doing research and conducting an independent survey of a group of incarcerated young men, Mr. Bryant found that over 80% of them had been raised without fathers, or any positive male role model in their lives. He decided that there must be something done to address the issues of fatherlessness and the devastating effect it has on the African American community and on our society as a whole.

Soon after Mr. Bryant founded the baby daddies 2 fathers movement, and created the highly praised website babydaddies2fathers, which gives insight into the issues and social ills that overwhelmingly stem from fatherlessness. The site also has personal stories of optimum fatherhood and statistical data relating to the many people who have experienced the effect of growing up without daddy. Bruce's baby daddies 2 fathers reality TV show, which was created to garner a relationship between that of a man and his child is coming soon.

These noble endeavors of Mr. Bryant's were all designed to inspire and educate young men of the importance of being responsible, nurturing and proactive fathers and will in essence reduce greatly the prison population in the United States, especially within the African American communities.

While incarcerated in New York state, Mr. Bryant completed two years of college and continues today to further his education. He has also assisted many inmates in achieving their General Equivalency Diploma (G.E.D.).

Mr. Bryant has as well been instrumental in inspiring several young men to relinquish their ties to gangs and gang related activity for good.

Mr. Bryant is an HIV/AIDS peer educator and has a deep concern for the wellbeing of those infected and affected by HIV/AIDS, so much in fact that he has created a second reality show titled Breaking the Silence which stems around the silent stigma that is so commonly associated with the virus. Breaking the silence and voicing the secret shame that keeps so many infected persons ostracized and in the dark is a major key in eliminating the spread of this deadly pandemic.

In 2009 Mr. Bryant along with Joseph Robinson, Stanley Bellamy and Williams Holmes founded the Civic-Duty Initiative; C-DI is an inmate organization established to give back to the youth in all of our communities in a passionate and stern effort to steer them from a life of crime. And in the Spring of 2010 Bruce implemented the first ever prisoner initiated Gun Buy Back program at the Sullivan Correctional Facility. He recruited the members of the Civic-Duty Initiative to collect monetary donations from inmates at the prison and presented those donations to Rev. Charles Muller with the Victory Chiristian Church in Albany New York in support of his Gun Buy program.

Bruce Bryant is a follower of Jesus Christ and is a faithful member of the House of the Lord Church, under the tutelage of Rev. Herbert Daughtry and plans one day soon to also preach the good news of our Lord and Savior Jesus Christ.

Sister, please!
The nerve of you! Listening to the media and reading your so called African American publications, Sister2Sister, Essence, and Ebony. Trying to define me and my reality - you label me and every other heterosexual brother incarcerated. You label me a Low Down, Down Low Brother, entrapped by vulnerability, searching for love in every corner of the facility. Is it too much B.E.T. and R. Kelly causing you to believe that I am not only in prison but, in the closet living a double life. Sister I tell you, with my head high I stride, in the Image and Likeness of the Almighty, I maintain my dignity. The only double you'll ever see of me, is the one you see in your dreams when you dream of a strong brother, a strong husband, or a strong father. Sister, I tell you I am my brother's keeper, NOT my brother's lover.