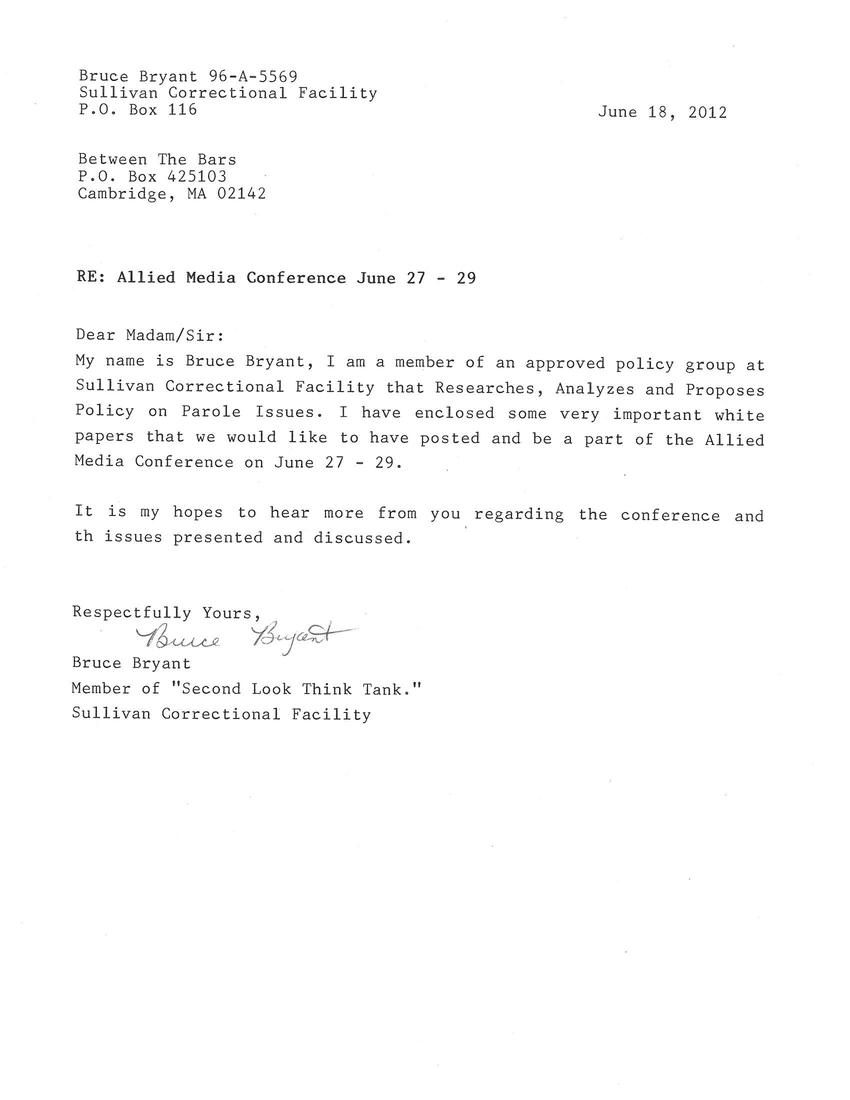 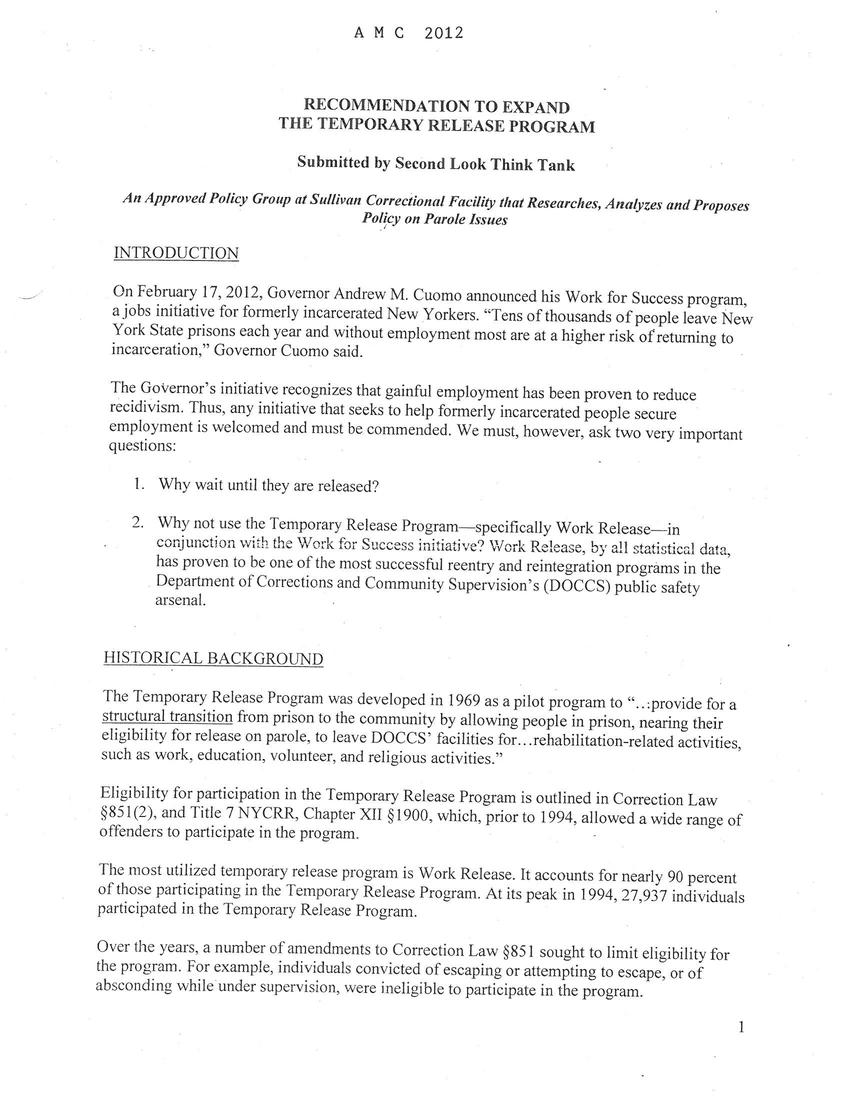 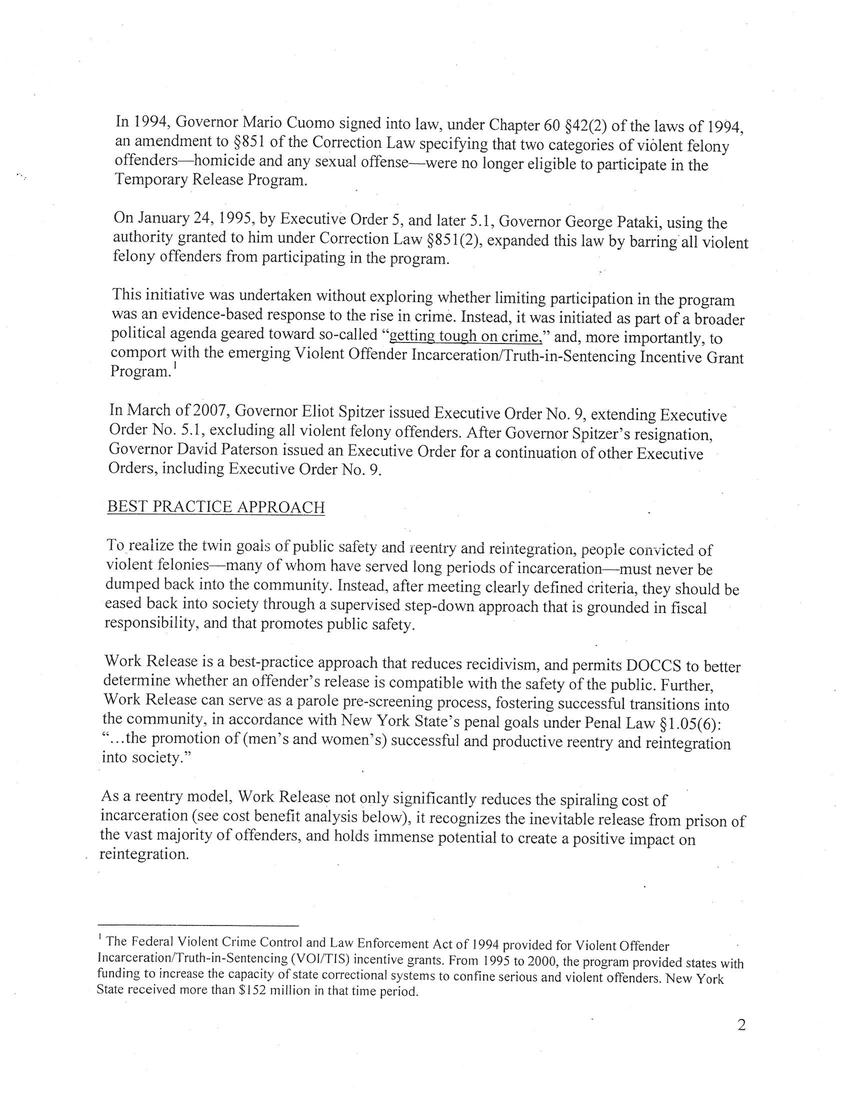 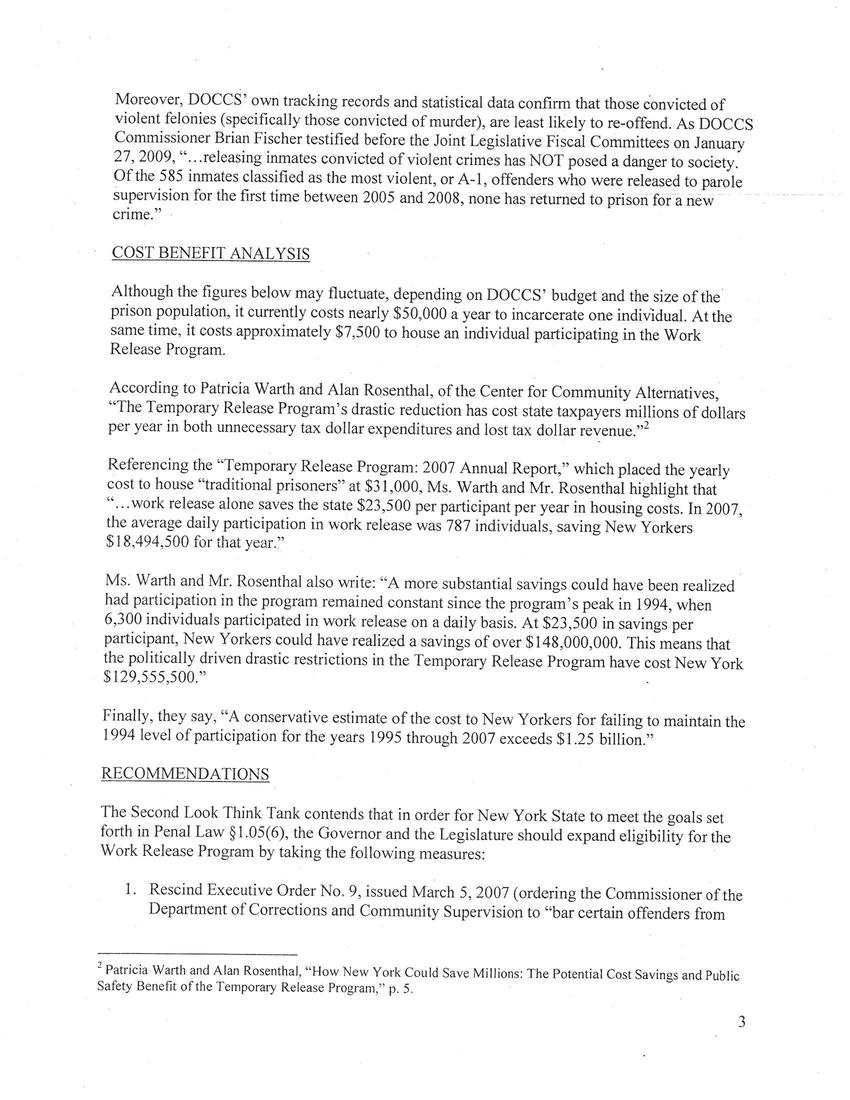 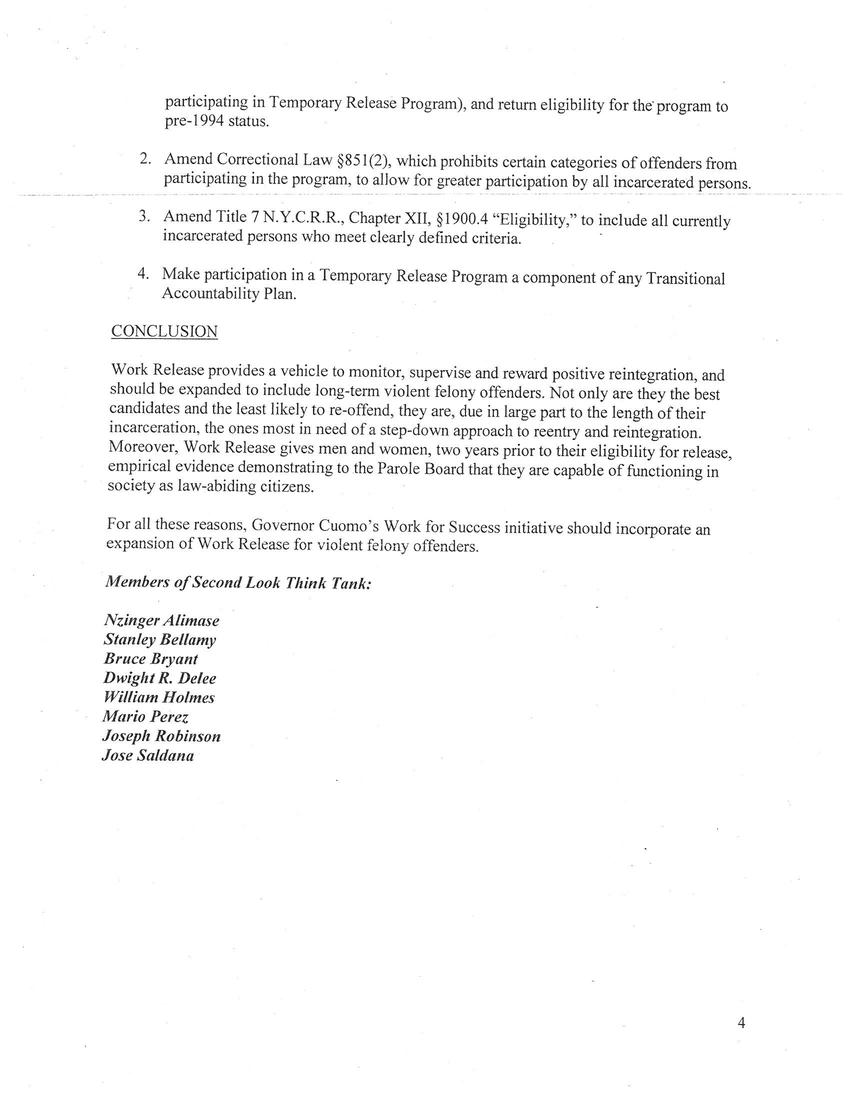 Dear Madam/Sir:
My name is Bruce Bryant, I am a member of an approved policy group at Sullivan Correctional Facility that Researches, Analyzes and Proposes Policy on Parole Issues. I have enclosed some very important white papers that we would like to have posted and be a part of the Allied Media Conference on June 27 - 29.

It is my hopes to hear more from you regarding the conference and the issues presented and discussed.

On February 17, 2012, Governor Andrew M. Cuomo announced his Work for Success program, a jobs initiative for formerly incarcerated New Yorkers. "Tens of thousands of people leave New York State prisons each year and without employment most are at a higher risk of returning to incarceration," Governor Cuomo said.

The Governor's initiative recognizes that gainful employment has been proven to reduce recidivism. Thus, any initiative that seeks to help formerly incarcerated people secure employment is welcomed and must be commended. We must, however, ask two very important questions:

1. Why wait until they are released?

2. Why not use the Temporary Release Program - specifically Work Release - in conjunction with the Work for Success initiative? Work Release, by all statistical data, has proven to be one of the most successful re-entry and reintegration programs in the Department of Corrections and Community Supervision's (DOCCS) public safety arsenal.

The Temporary Release Program was developed in 1969 as a pilot program to "...provide for a structural transition from prison to the community by allowing people in prison, nearing their eligibility for release on parole, to leave DOCCS' facilities for...rehabilitation-related activities, such as work, education, volunteer, and religious activities."

Eligibility for participation in the Temporary Release Program is outlined in Correction Law [symbol]851(2), and Title 7 NYCRR, Chapter XII [symbol]1900, which, prior to 1994, allowed a wide range of offenders to participate in the program.

Over the years, a number of amendments to Correction Law [symbol]851 sought to limit eligibility for the program. For example, individuals convicted of escaping or attempting to escape, or of absconding while under supervision, were ineligible to participate in the program.

In 1994, Governor Mario Cuomo signed into law, under Chapter 60 [symbol]42(2) of the laws of 1994, an amendment to [symbol]851 of the Correction Law specifying that two categories of violent felony offenders - homicide and any sexual offenders - were no longer eligible to participate in the Temporary Release Program.

On January 24, 1995, by Executive Order 5, and later 5.1, Governor George Pataki, using the authority granted to him under Correction Law [symbol]851(2), expanded this law by barring all violent felony offenders from participating in the program.

This initiative was undertaken without exploring whether limiting participation in the program was an evidence-based response to the rise in crime. Instead, it was initiated as part of a broader political agenda geared towards so-called "getting tough on crime," and, more importantly, to comport with the emerging Violent Offender Incarceration/Truth-in-Sentencing Incentive Grant Program. ^1

To realize the twin goals of public safety and re-entry and reintegration, people convicted of violent felonies - many of whom have served long periods of incarceration - must never be dumped back into the community. Instead, after meeting clearly defined criteria, they should be eased back into society through a supervised step-down approach that is grounded in fiscal responsibility, and that promotes public safety.

This campaign is really exciting. I agree that expanding the temporary release program is extremely important. The transition to life after prison would be eased if inmates were allowed to work while in prison.

Also, the job market has really changed over the years. We no longer have the job security we once had in this country and people are expected to be adaptable and be able to change jobs and even careers several times throughout their lives. The more opportunities incarcerated folks have to work in a field, the easier that will be for them to enter into the job force.

Lastly, I imagine that being able to point back to work done in prison would help someone's chances in getting hired because they have that prior experience.
(scanned reply – view as blog post)
uploaded July 27, 2012.  Original (PDF) 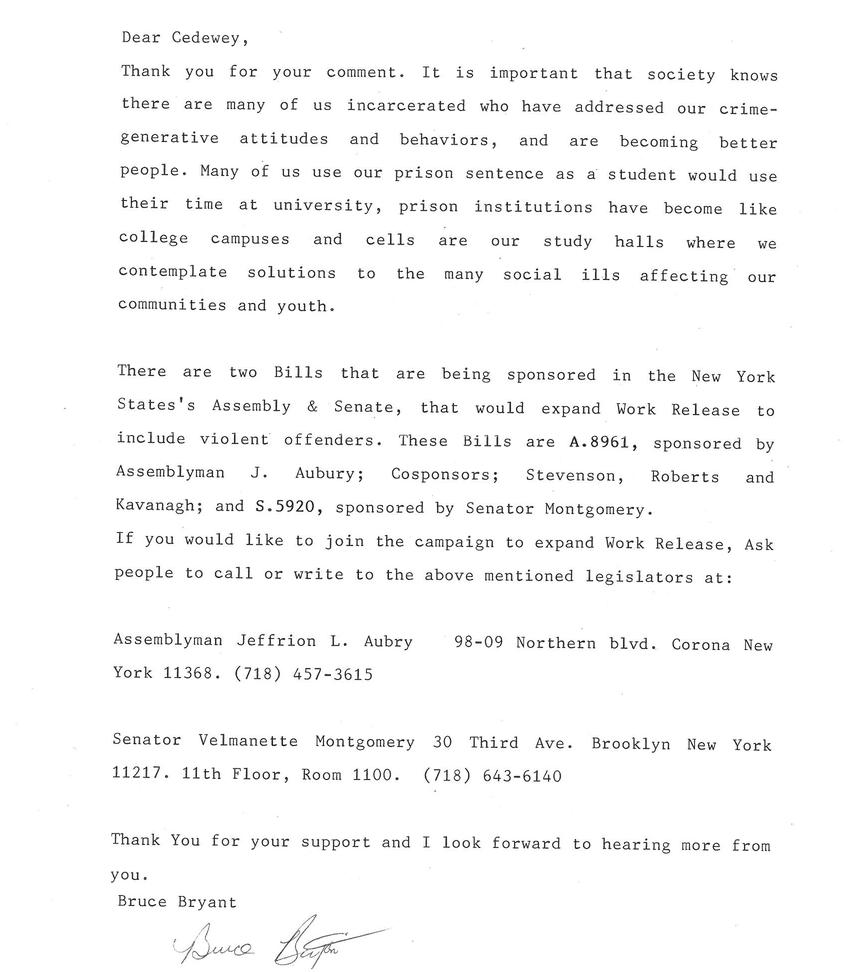 Thank you for the response. Unfortunately I can't correspond further on this topic, but I have several friends and contacts in New York and have told them about this campaign and the numbers to the legislators you included. Keep up the good fight!
(scanned reply – view as blog post)
uploaded Sept. 2, 2012.  Original (PDF) 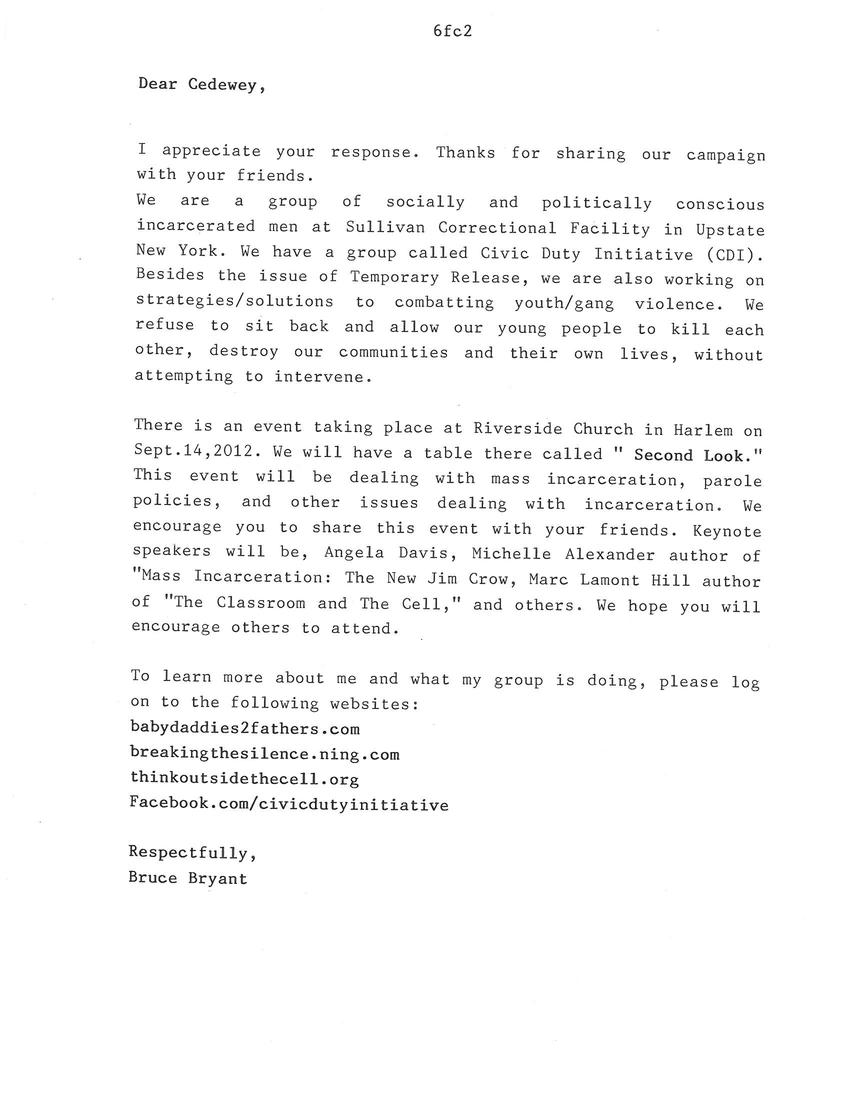