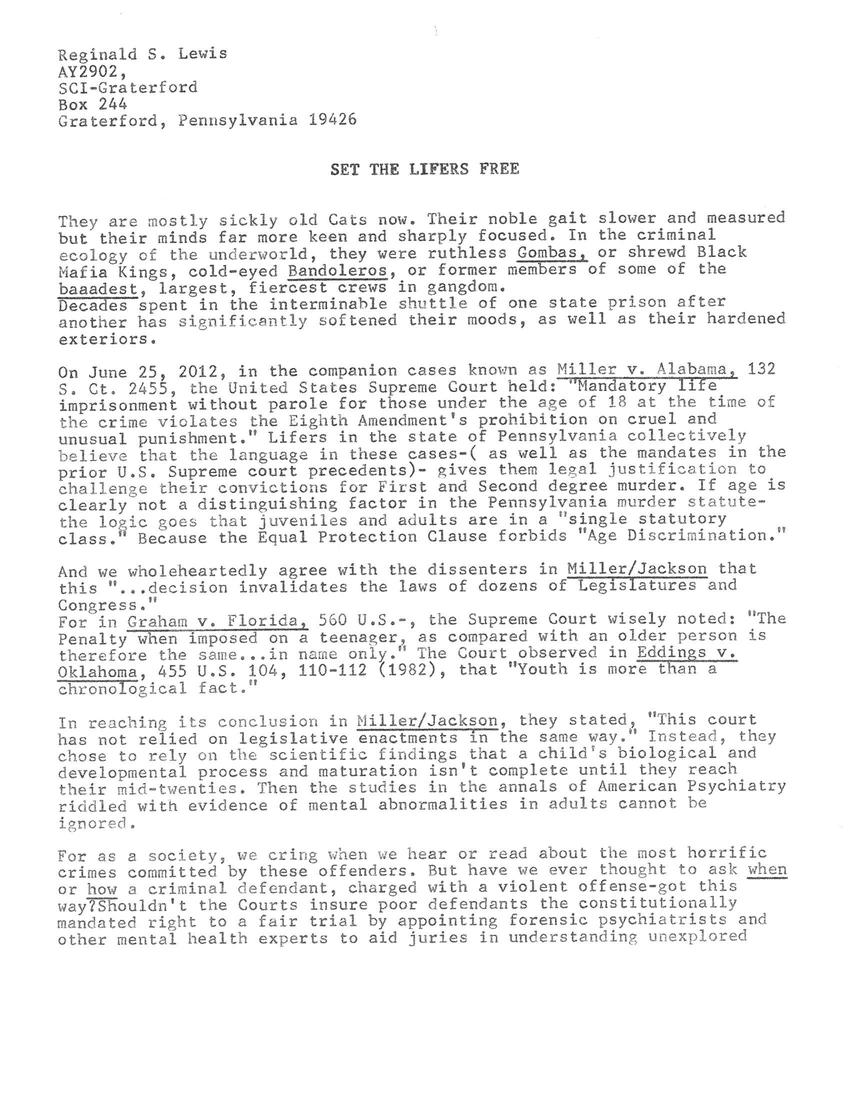 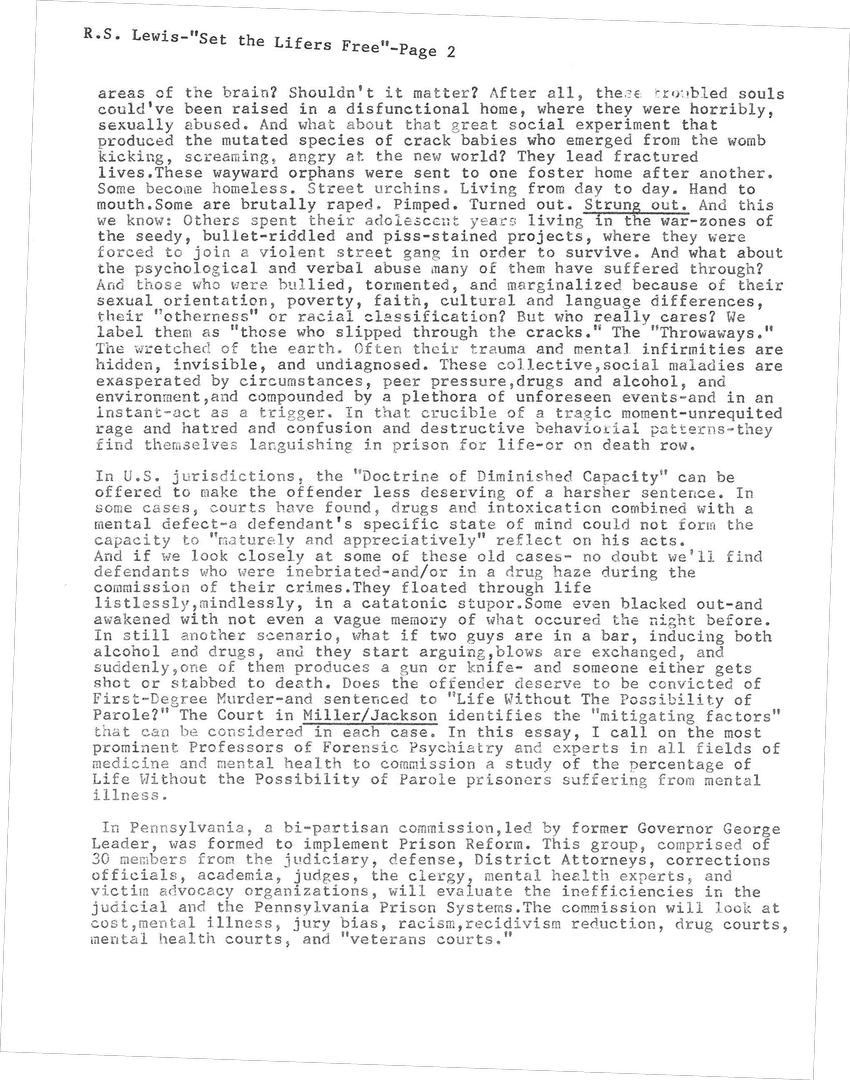 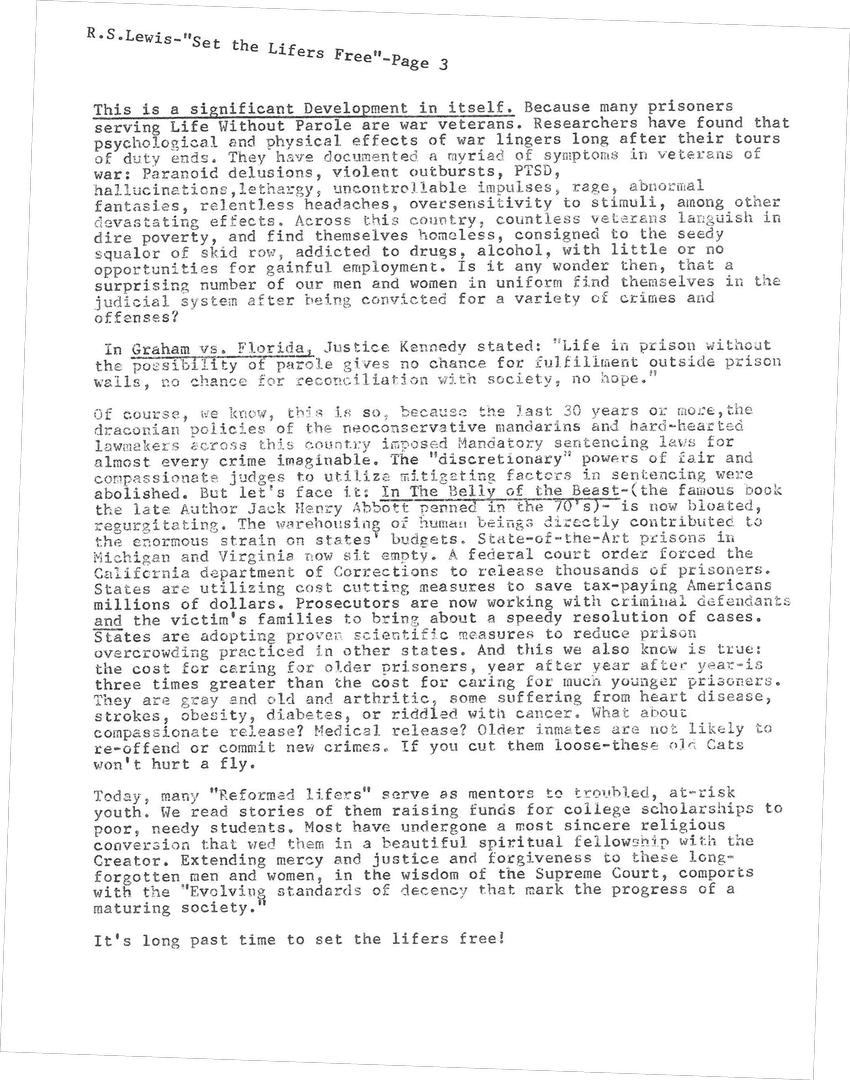 They are mostly sickly old Cats now. Their noble gait slower and measured but their minds far more keen and sharply focused. In the criminal ecology of the underworld, they were ruthless Gobmas, or shrew Black Mafia, cold-eyed Bandoleros, or former members of some of the baaadest, largest fiercest crews in gangdom.

Decades spent in the interminable shuttle of one state prison after another has significantly softened their moods, as well as their hardened exteriors.

On June 25, 2012, in companion cases known as Miller v. Alabama, 132 S Ct. 2455, the United States Supreme Court held: "Mandatory life imprisonment without parole for those under the age of 18 at the time of the crime violates the Eighth Amendment's prohibition on cruel and unusual punishment." Lifers in the state of Pennsylvania collectively believe that the language in these cases (as well as the mandates in the prior US Supreme court precedents) gives them legal justification to challenge their convictions for First and Second degree murder. If age is clearly not a distinguishing factor in the Pennsylvania murder statute - the logic goes that juveniles and adults are in a "single statutory class." Because the Equal Protection Clause forbids "age discrimination".

And we wholeheartedly agree with the dissenters in Miller/Jackson that this "decision invalidates the laws of dozens of Legislatures and Congress."

In reaching its conclusion in Miller/Jackson, they stated: "This court has not relied on legislative enactments in the same way". Instead, they chose to rely on the scientific findings that a child's biological and developmental process and maturation isn't complete until they reach their mid twenties. Then the studies in the annals of American Psychiatry riddled with evidence of mental abnormalities in adults cannot be ignored.

For as a society, we cry when we hear or read about the most horrific crimes committed by these offenders. But have we ever thought to ask when or how a criminal defendant, charged with a violent offence got this way? Shouldn't the courts insure poor defendants the constitutionally mandated right to a fair trial by appointing forensic psychiatrists and other mental health experts to aid juries in understanding unexplored areas of the brain? Shouldn't it matter? After all, these troubled souls could've been raised in a dysfunctional home, where they were horribly, sexually abused. And what about the great social experiment that produced the mutated species of crack babies who emerged from the womb kicking, screaming, angry at the new world? They lead fractured lives. These wayward orphans were sent to one foster home after another. Some become homeless. Street urchins. Living from day to day. Hand to mouth. Some are brutally raped. Pimped. Turned out. Strung out. And this we know: others spent their adolescent years living in the war-zones of the seedy, bullet-riddled and piss-stained projects, where they were forced to join a violent street gang in order to survive. And what about the psychological and verbal abuse many of them have suffered through? And those who were bullied, tormented, and marginalized because of their sexual orientations, poverty, faith, cultural and language differences, their "otherness" or racial classification? But who really cares? We label them as "those who slipped through the cracks". The "throwaways". The wretched of the earth. Often their trauma and mental infirmities are hidden, invisible and undiagnosed. These collective, social maladies are exasperated by circumstances, peer pressure, drugs and alcohol and environment and compounded by a plethora of unforeseen events and - in an instant - act as a trigger. In that crucible of a tragic moment - unrequited rage and hatred and confusion and destructive behavioural patterns - they find themselves languishing in prison for life - or on death row.

In US jurisdictions, the Doctrine of Diminished Capacity can be offered to make the offender less deserving of a harsher sentence. In some cases, courts have found, drugs and intoxication combined with a mental defect - a defendant's specific state of mind - could not form the capacity to "maturely and appreciatively" reflect on his acts. And if we look closely at some of these old cases no doubt we'll find defendants who were inebriated and/or in a drug haze during the committal of their crimes. They floated through life listlessly, mindlessly, in a catatonic stupor. Some even blacked out and awakened without even a vague memory of what occurred the night before. In still another scenario, what if two guys are in a bar, consuming both alcohol and drugs, and they start arguing; blows are exchanged and suddenly one of them produced a gun of knife and someone either gets shot or stabbed to death. Does the offender deserve to be convicted of First Degree Murder and sentenced to Life Without the Possibility of Parole? The court in Miller/Jackson identifies the mitigating factors that can be considered in each case. In this essay, I call on the most prominent professors of forensic psychiatry and experts in all fields of medicine and mental health to commission a study of the percentages of Life Without the Possibility of Parole prisoners suffering from mental illness.

In Pennsylvania, a bi-partisan commission led by former Governor George Leader was formed to implement prison reform. This group, comprised of 30 members from the judiciary, the clergy, mental health experts and victim advocacy organisations will evaluate the inefficiencies in the judicial and the Pennsylvania prison systems. The commission will look at cost, mental illness, jury bias, racism, recidivism reduction, drug courts, mental health courts and veterans' courts.

This is a significant development in itself, because many prisoners serving Life Without Parole are war veterans. Researchers have found that psychological and physical effects of war linger long after their tours of duty ends. They have documented a myriad of symptoms in veterans of war: paranoid delusions, violent outbursts, PTSD, hallucinations, lethargy, uncontrollable impulses, rage, abnormal fantasies, relentless headaches and over-sensitivity to stimuli amongst other devastating effects. Across this country, countless veterans languish in dire poverty and find themselves homeless, consigned to the seedy squalor of Skid Row, addicted to drugs and alcohol with little or no opportunities for gainful employment. Is it any wonder then, that a surprising number of our men and women in uniform find themselves in the judicial system after being convicted for a variety of crimes and offences?

In Graham vs. Florida, Justice Kennedy stated: "Life in prison without the possibility of parole gives no chance for fulfilment outside prison walls, no chance for reconciliation with society, no hope."

Of course we know this is so, because for the last 30 years of more the draconian policies of the neoconservative mandarins and hard-hearted lawmakers across this country imposed mandatory sentencing laws for almost every crime imaginable. The discretionary powers of fair and compassionate judges to utilize mitigating factors in sentencing were abolished. But let's face it, In the Belly of the Beast (the famous book the late author Jack Henry Abbott penned in the 70s) is now bloated, regurgitating. The warehousing of human beings directly contributed to the enormous strain on states' budgets. State of the art prison sin Michigan and Virginia now sit empty. A federal court order forced the California Department of Corrections to release thousands of prisoners. States are utilizing cost-cutting measures to save tax-paying Americans millions of dollars. Prosecutors are now working with criminal defendants and the victim's families to bring about a speedy resolution of cases. States are adopting proven scientific measures to reduce prison overcrowding practiced in other states. And this we also know is true: the cost of caring for older prisoners year after year is three times greater than the cost of caring for much younger prisoners. They are gray and old and arthritic, some suffering from heart disease, strokes, obesity, diabetes or riddled with cancer. What about compassionate release? Medical release? Older inmates are not likely to re-offend or commit new crimes. If you cut them loose these old cats won't hurt a fly.

Today, many reformed lifers serve as mentors to troubled, at risk youth. We read stories of them raising funds for college scholarships to poor, needy students. Most have undergone a most sincere religious conversion that wed them in a beautiful spiritual forgiveness with the Creator. Extending mercy and justice and forgiveness to these long-forgotten men and women, in the wisdom of the Supreme Court, comports with the evolving standards of decency that mark the progress of a maturing society.

It's long past time to set the lifers free!