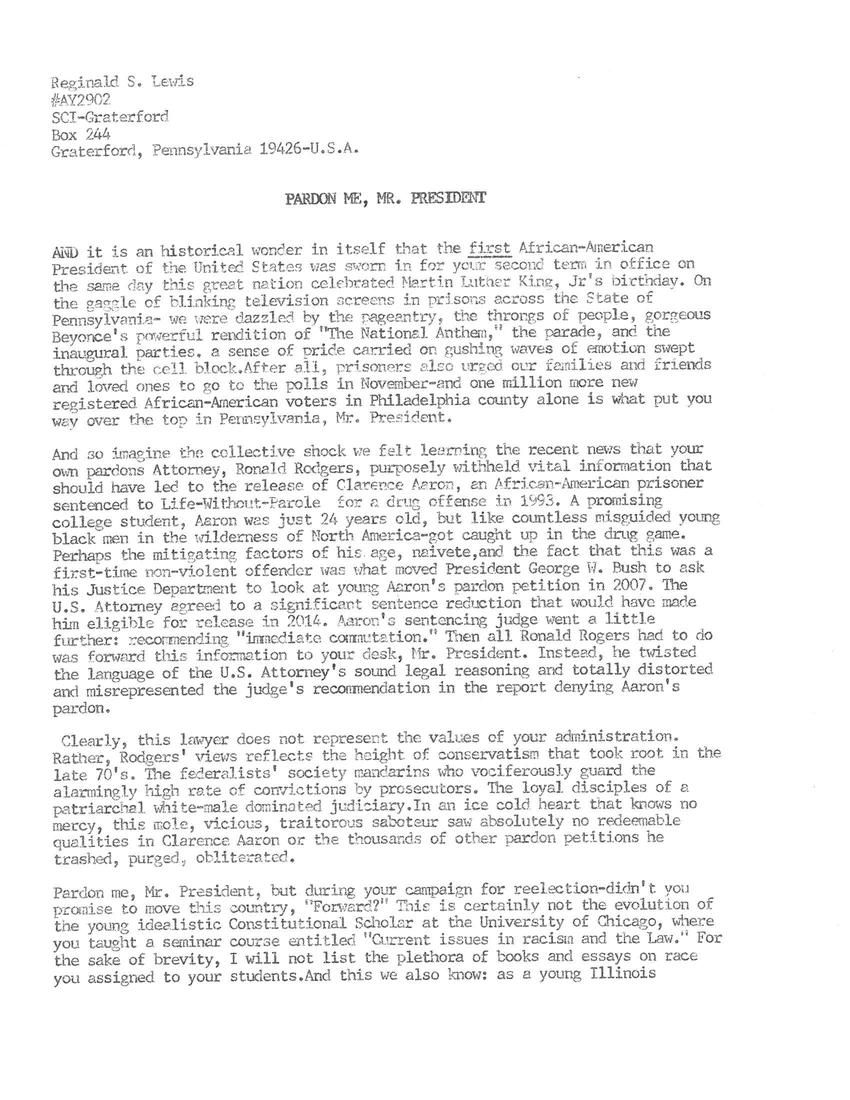 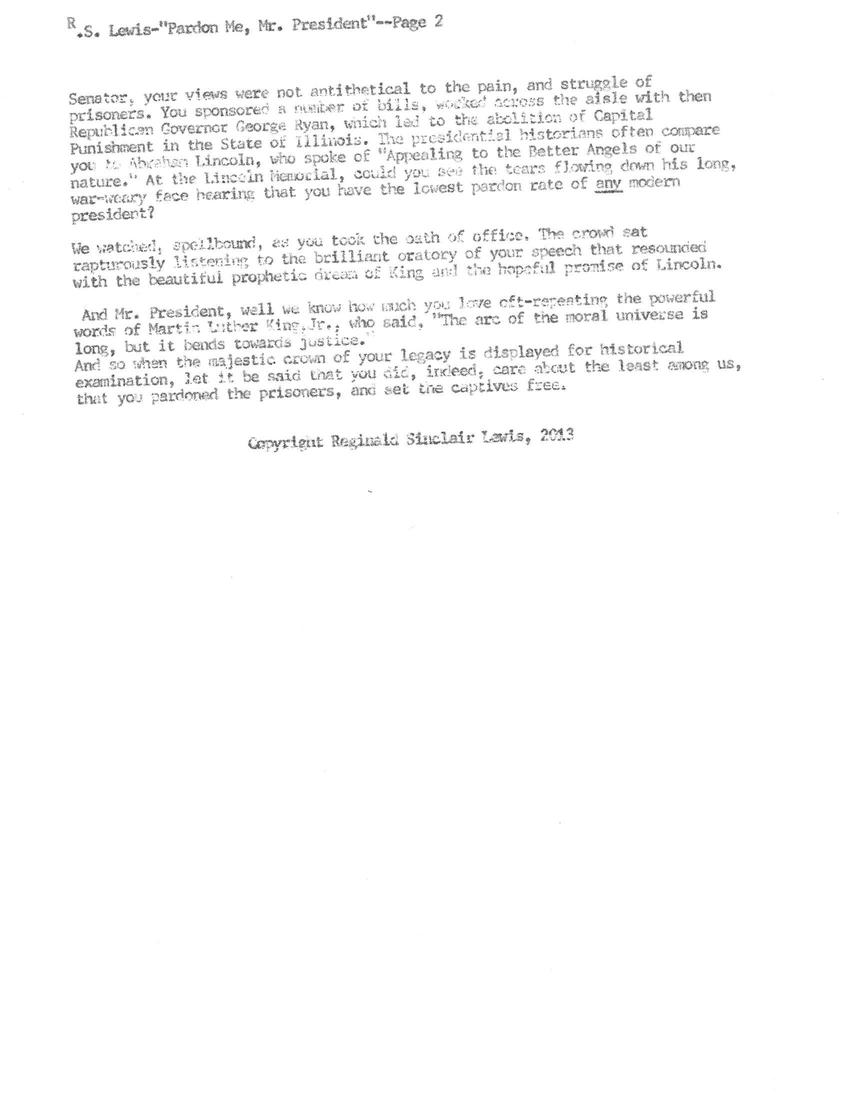 AND it is an historical wonder in itself that the first African-American President of the United States was sworn in for your second term in office on the same day this great nation celebrated Martin Luther King, Jr's brithday. On the gaggle of blinking television screens in prisons across the State of Pennsylvania - we were dazzled by the pageantry, the throngs of people, gorgeous Beyonce's powerful rendition of "The National Anthem,£ the parade, and the inaugural parties, a sense of pride carried on gushing waves of emotion swept through the cell block. After all, prisoners also urged our families and friends and loved ones to go to the polls in November - and one million more new registered African-American voters in Philadelphia county alone is what put you way over the top in Pennsylvania, Mr. President.

And so imagine the collective shock we felt learning the recent news that your own pardons Attorney, Ronald Rodgers, purposely withheld vital information that should have led to the release of Clarence Aaron, an African-American prisoner sentenced to Life-Without-Parole for a drug offence in 1993. A promising college student, Aaron was just 24 years old, but like countless misguided young black men in the wilderness of North America - got caught up in the drug game. Perhaps the mitigating factors of his age, naivete, and the fact that this was a first-time non-violent offender was what moved President George W. Bush to ask his Justice Department to look at young Aaron's pardon petition in 2007. The U.S. Attorney agreed to a significant sentence reduction that would have made him eligible for release in 2014. Aaron's sentencing judge went a little further: recommending "immediate commutation." Then all Ronald Rodgers had to go was forward this information to your desk, Mr. President. Instead, he twisted the language of the U.S. Attorney's sound legal reasoning and totally distorted and misrepresented the judge's recommendation in the report denying Aaron's pardon.

Clearly, this lawyer does not represent the values of your administration. Rather, Rodger's views reflect the height of conservatism that took root in the late 70's. The federalists' society mandarins who vociferously guard the alarmingly high rate of convictions by prosecutors. The loyal disciples of a patriarchal white-male dominated judiciary. In an ice-cold heart that knows no mercy, this mole, vicious, traitorous saboteur saw absolutely no redeemable qualities in Clarence Aaron or the thousands of other pardon petitions he trashed, purged, obliterated.

Pardon me, Mr. President, but during your campaign for re-election - didn't you promise to move this country, "forward?" This is certainly not the evolution of the young idealistic Constitutional Scholar at the University of Chicago, where you taught a seminar course entitled "Current issues in racism and the Law." For the sake of brevity, I will not list the plethora of books and essays on race you assigned to your students. And this we also know: as a young Illinois Senator, your views were not antithetical to the pain, and struggle of prisoners. You sponsored a number of bills, worked across the aisle with then Republican Governor George Ryan, which led to the abolition of Capital Punishment in the State of Illinois. The presidential historians often compare you to Abraham Lincoln, who spoke of "appealing to the better angels of our nature." At the Lincoln Memorial, could you see the tears flowing down his long, war-weary face hearing that you the lowest pardon rate of any modern president?

We watched, spellbound, as you took the oath of office. The crowd sat rapturously listening to the brilliant oratory of your speech that resounded with the beautiful prophetic dream of King and the hopeful promise of Lincoln.

And Mr. President, well we know how much you love oft-repeating the powerful words of Martin Luther King Jr., who said, "the arc of the moral universe is long, but it bends towards justice."

And so when the majestic crown of your legacy is displayed for historical examination, let it be said that you did, indeed, care about the least among us, that you pardoned the prisoners, and set the captives free.