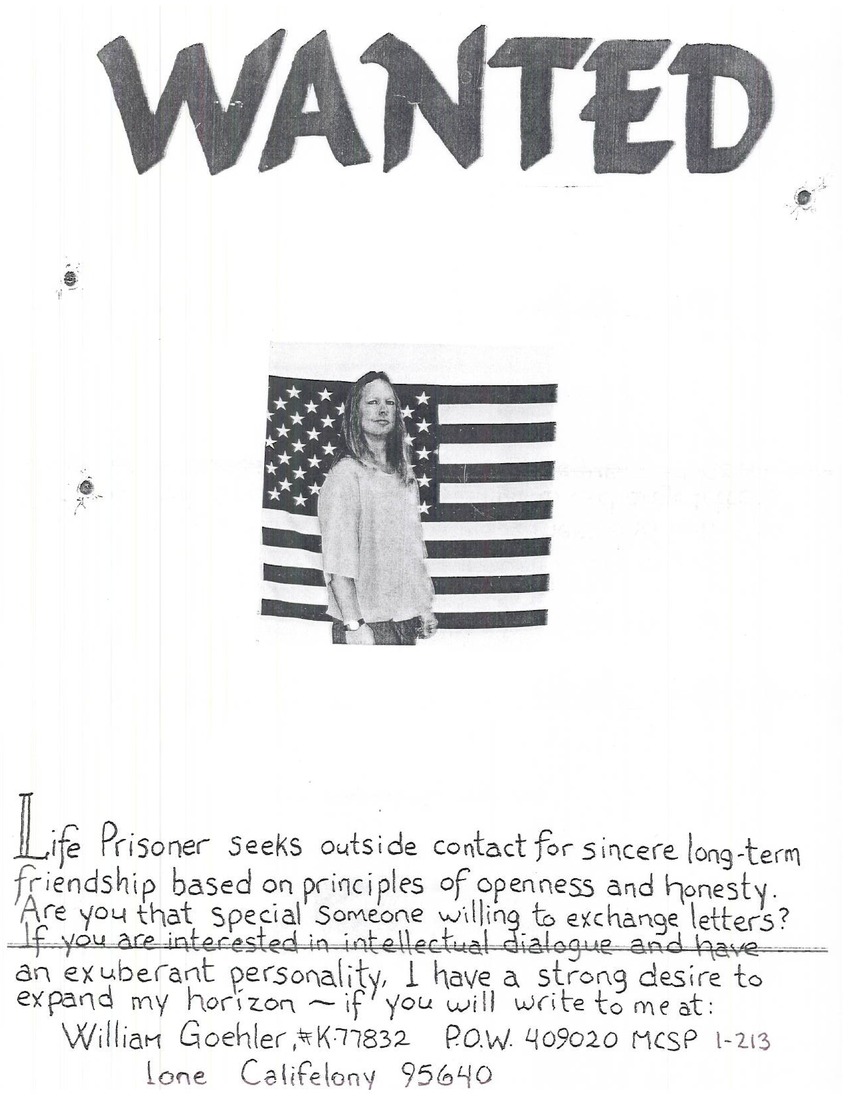 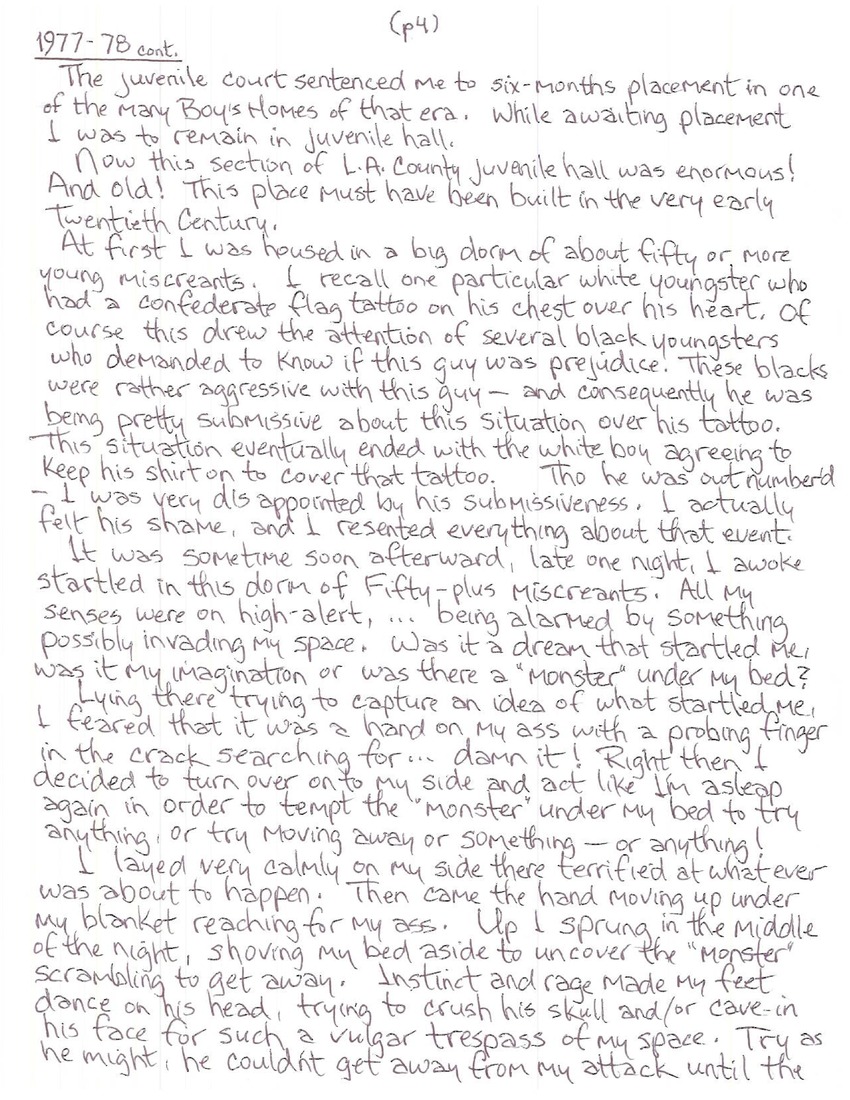 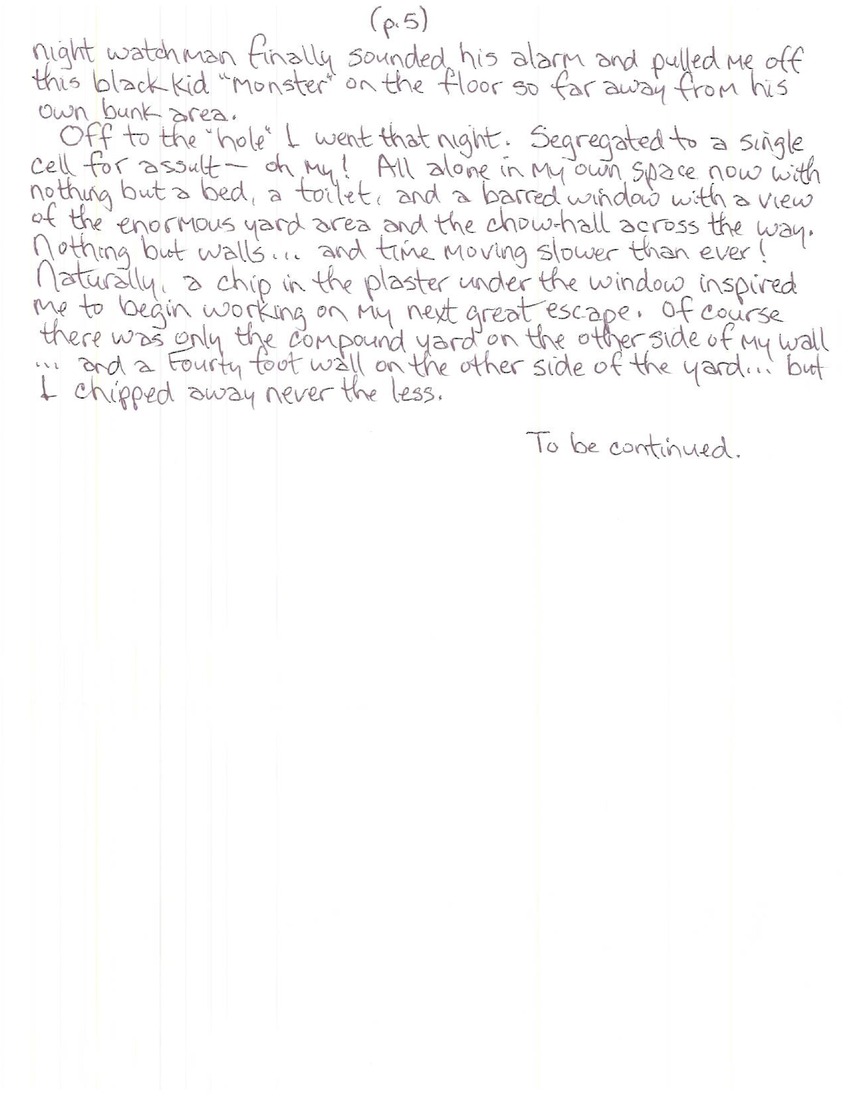 Life prisoner seeks outside contact for sincere long-term friendship based on principles of openness and honesty. Are you that special someone willing to exchange letters? If you are interested in intellectual dialogue and have an exuberant personality, I have a strong desire to expand my horizon - if you will write to me at:
William Goehler, #K77832 P.O.W. 409020 MCSP 1-213
Ione Califelony 95640

1977-78 cont.
The juvenile court sentenced me to six-months placement in one of the many Boy's Homes of that era. While awaiting placement I was to remain in Juvenile hall.
Now this section of L.A. County Juvenile hall was enormous! And old! This place must have been built in the very early Twentieth Century.
At first I was housed in a big dorm of about fifty or more young miscreants. I recall one particular white youngster who had a confederate flag tattoo on his chest over his heart. Of course this drew the attention of several black youngsters were rather aggressive with this guy - and consequently he was being pretty submissive about this situation over his tattoo.
This situation eventually ended with the white boy agreeing to keep his shirt on to cover that tattoo. Tho he was out number'd - I was very disappointed by his submissiveness. I actually felt his shame, and I resented everything about that event.
It was sometime soon afterward, late one night, I awoke startled in this dorm of fifty-plus miscreants. All my sense were on high-alert, ...being alarmed by something possibly invading my space. Was it a dream that startled me, was it my imagination or was there a "monster" under my bed?
Lying there trying to capture an idea of what startled me, I feared that it was a hand on my ass with a probing finger in the crack searching for... damn it! Right then I decided to turn over on to my side and act like I'm asleep again in order to tempt the "monster" under my bed to try anything, or try moving away or something - or anything!
I laid very calmly on my side there terrified at what ever was about to happen. Then came the hand moving up under my blanket reaching for my ass. Up I sprung in the middle of the night, shoving my bed aside to uncover the "monster" scrambling to get away. Instinct and rage made my feet dance on his head, trying to crush his skull and/or cave-in his face for such a vulgar trespass of my space. Try as he might, he couldn't get away from my attack until the night watchman finally sounded his alarm and pulled me off this black kid "monster" on the floor so far away from his own bunk area.
Off to the "hole" I went that night. Segregated to a single cell for assault - oh my! All alone in my own space now with nothing but a bed, a toilet, and a barred window with a view of the enormous yard area and the chow-hall across the way. Nothing but walls... and time moving slower that ever!
Naturally, a chip in the plaster under the window inspired me to begin working on my next great escape. Of course there was only the compound yard on the other side of my wall... and a forty foot wall on the other side of the yard... but I chipped away never the less.