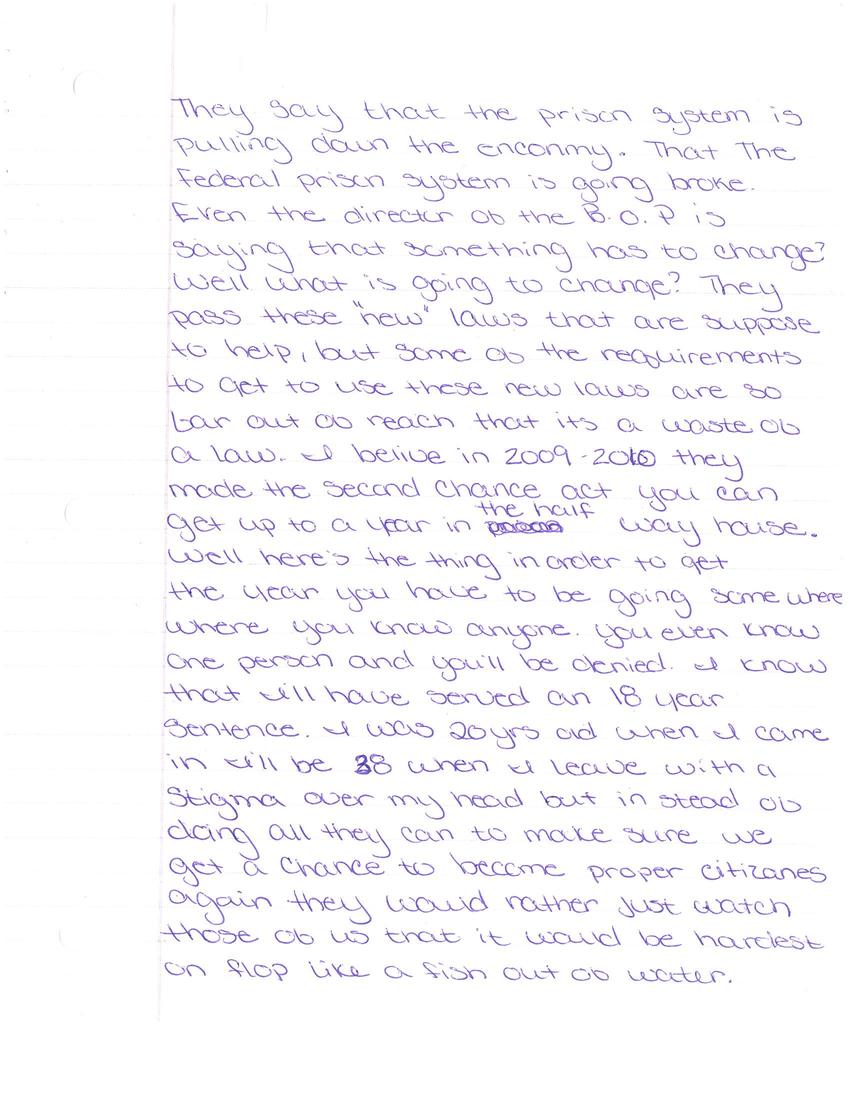 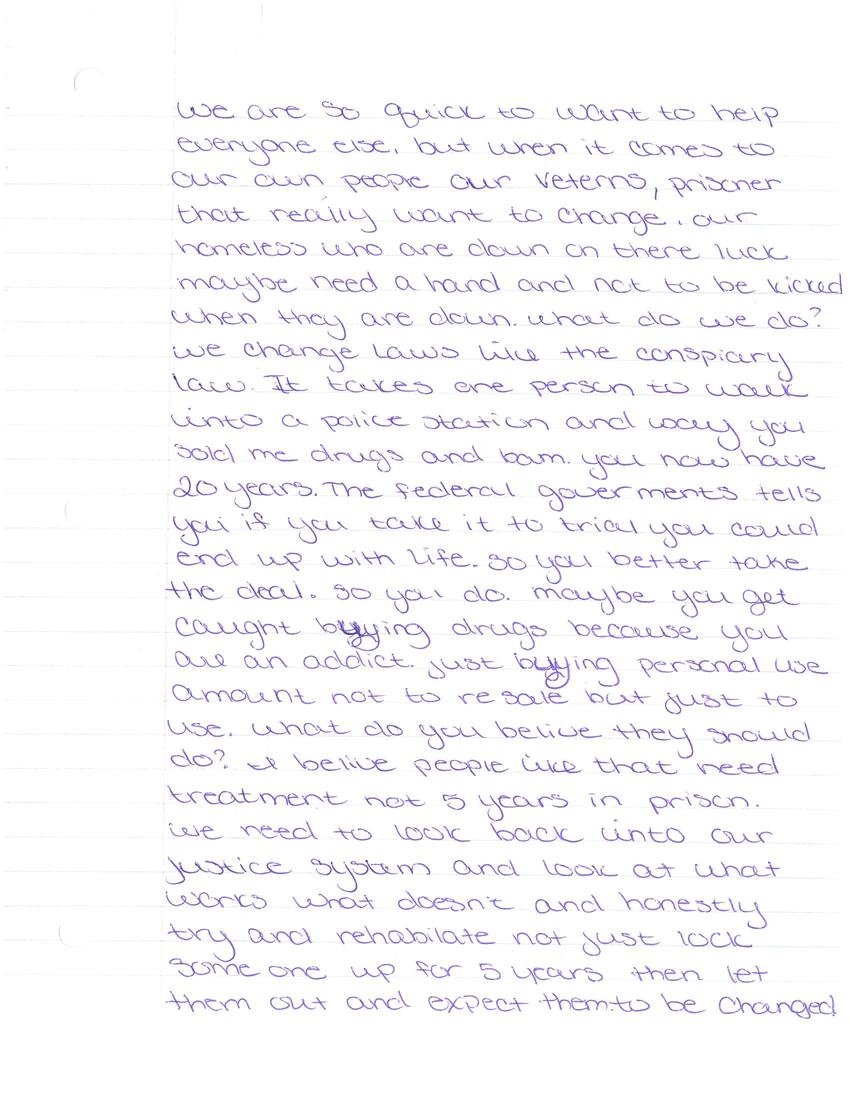 They say that the prison system is pulling down the economy- that the Federal Prison System is going broke. even the Director of the B.O.P. is saying that something has to change. Well, what is going to change? They pass these "new" laws that are supposed to help, but some of the requirements to get to use these new laws are so far out of reach that it's a waste of the law. I believe in 2009-2010 they made the second chance act you can get up to a year in the Halfway House. Well, here's the thing- in order to get the year you have to be going somewhere where you don't know anyone. If you even know one person then you'll be denied. I know that I will have served an 18 year sentence. I was 20 years old when I came and I'll be 39 when I leave with a stigma over my head, but instead of doing all they can to make sure we get a chance to be proper citizens again they would rather just watch those of us that it would be hardest on flop like fish out of water.

We are so quick to want to help everyone else, but when it comes to our own people our veterans, prisoners who really want to change, our homeless who are down on their luck- who maybe need a hand and not to be kicked when they are down- what do we do? We change laws like the conspiracy law. It takes one person to walk into a police station and say you sold me drugs and bam- you now have 20 years. The Federal Governments tell you that if you take it to trial you could end up with life. So you better take the deal. Maybe you get caught buying drugs because you are an addict- just buying personal use amounts, not to resell but just to use- what do you believe they should do? I believe people like that need treatment, not 5 years in prison. We need to look back into our Justice System and look at what works and what doesn't, and honestly try ad rehabilitate, not just lock someone up for 5 years then let them out, expecting them to be changed.

Dear Amber, Since you're in there for drug related issues, there is hope. I don't know what drugs you had issues with but marijuana is becoming legal in some states. Washington and Colorado just made marijuana legal for recreational use. Prosecutors in Washington and Colorado threw out their marijuana cases. They're no longer prosecuting people for marijuana. The cases were thrown out. More states might legalize marijuana in the future. If they do then it might be easier for people convicted of drug felonies to have their record expunged.Or at-least people with drug felonies would be de-stigmatized. Stay strong.
Sincerely
Melissa
(scanned reply – view as blog post)
uploaded March 20, 2013.  Original (PDF) 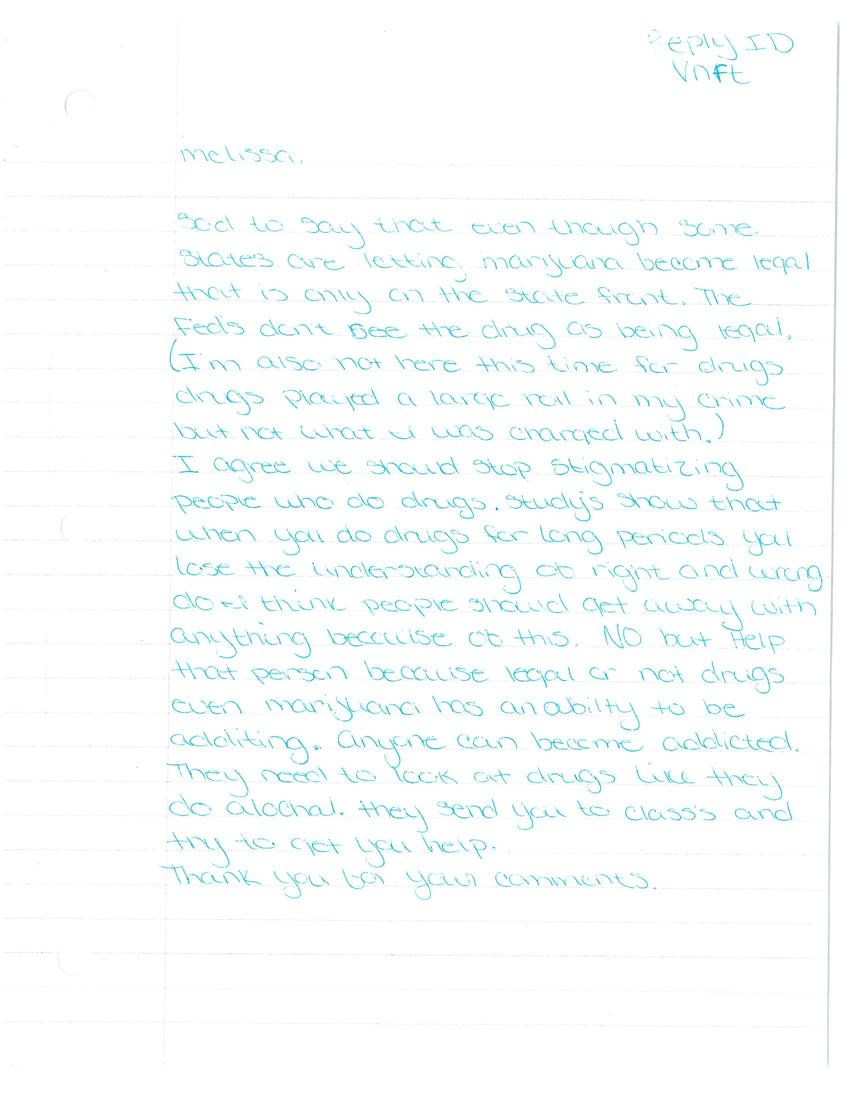 Well, I think Obama might change his mind about marijuana toward the end of his term. Obama has already made the statement that he will NOT go after marijuana users or vender's in states where it's legal. Of course if Ron Paul was president that stuff would already be legal.
Anyways, what's your spiritual life like? Are you close to God? I'm a Christian. 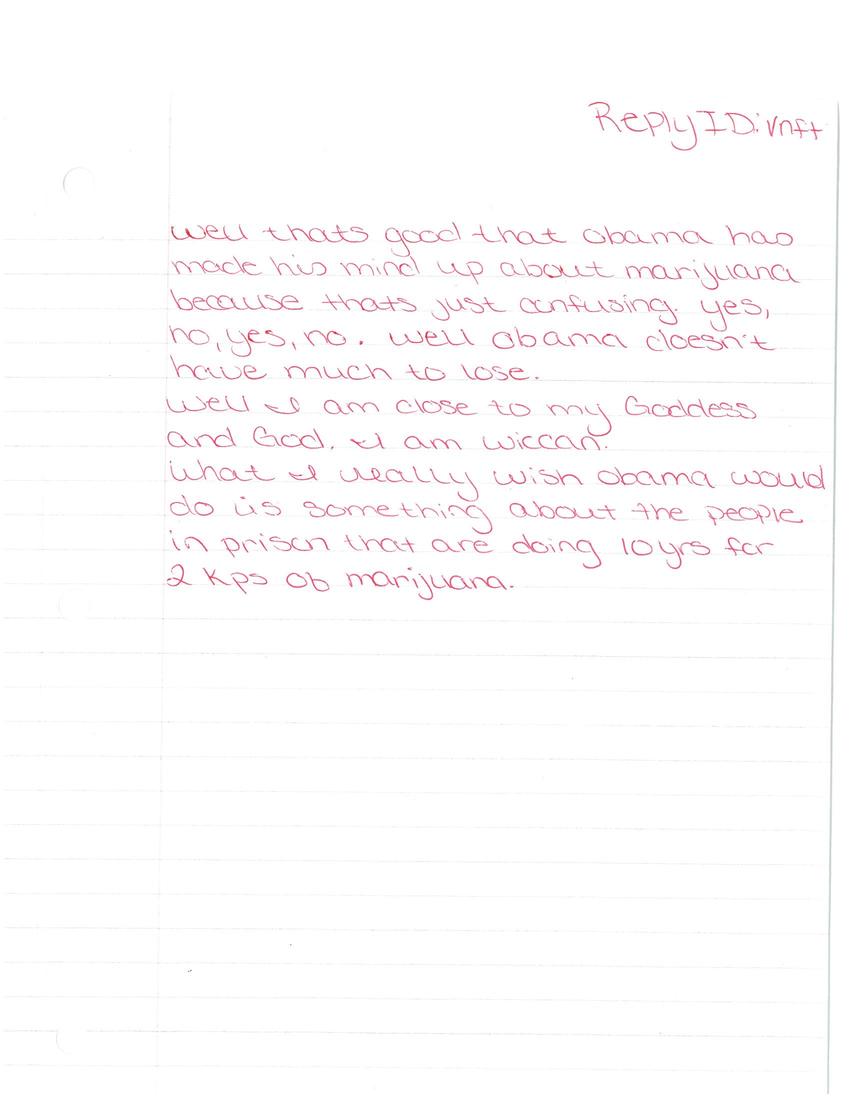