The Dark Heart of Penalism 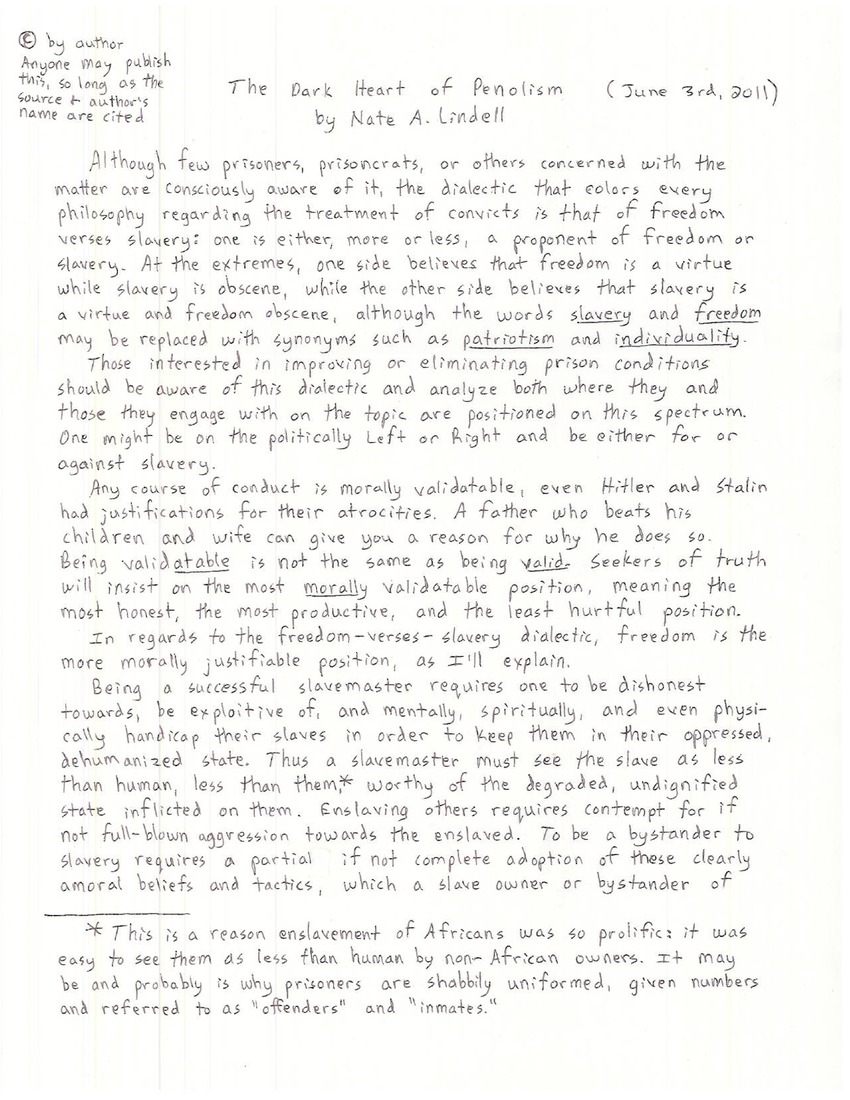 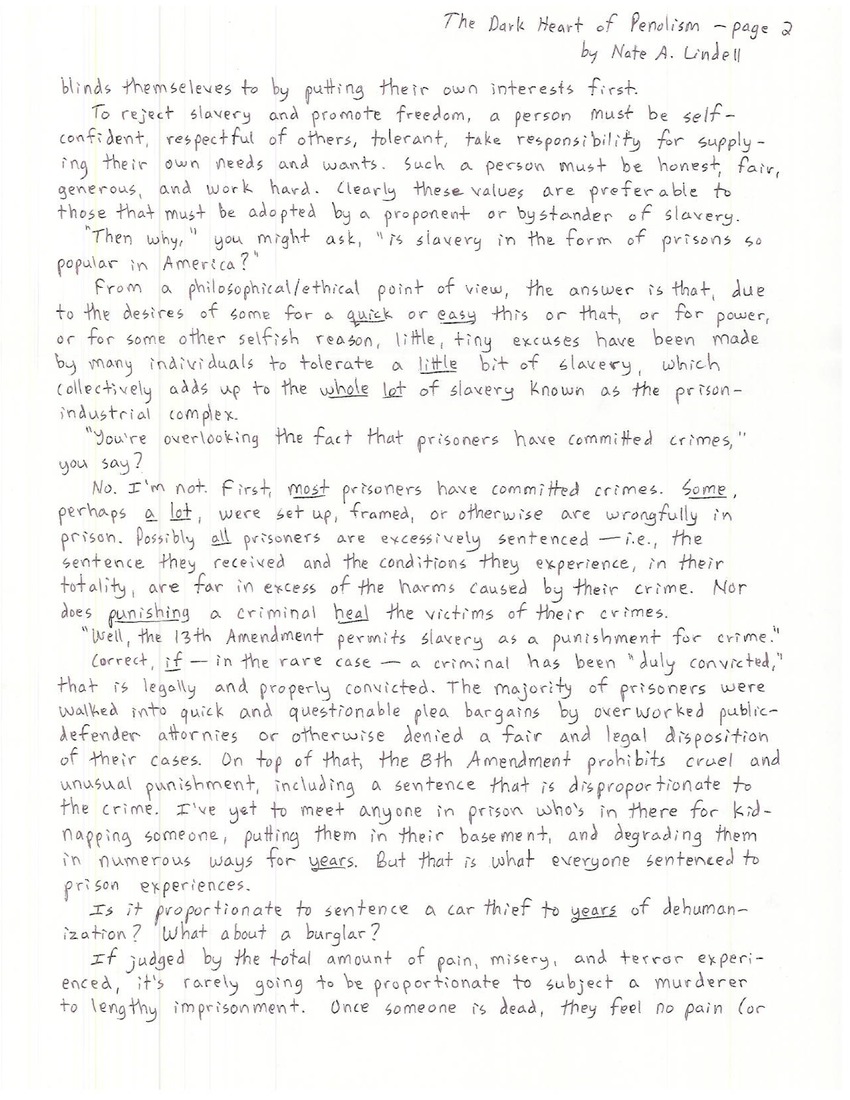 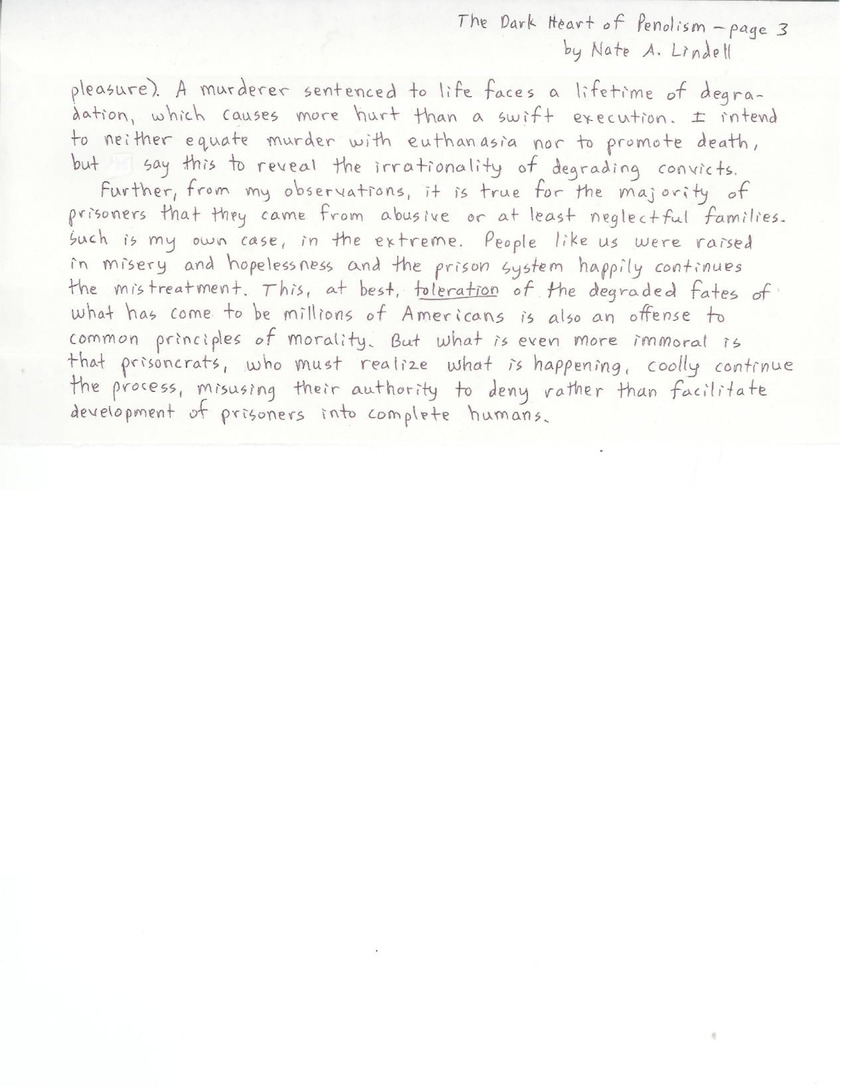 copyright by author
Anyone may publish this, so long as the source and author's name are cited

Although few prisoners, prisoncrats, or others concerned with the matter are consciously aware of it, the dialectic that colors every phislosophy regarding the treatment of convicts is that of freedom versus slavery: one is either, more or less, a proponent of freedom or slavery. At the extremes, one side believes that freedom is a virtue, while slavery is obscene, while the other side believes that slavery is a virtue, and freedom is obscene, although the words slavery and freedom may be replaced with synonims, such as "patriotism" and "individuality".
Those interested in improving oreliminating prison conditions should be aware of this dialectic and analyze both where they and those they engage with on the topic are positioned on this spectrum.
One might be on the politically Left of Right and be either for or against slavery.
Any course of conduct is morally validateable, even Hitler and Stalin had justifications for their atrocities. A father who beats his children and wife can give you a reason for why he does so.
Being validatable is not the same as being valid. Seekers of truth will insist on the most morally validatable position, meaning, te mos honest, the most productive, and the least hurtful position.
In regards to the freedom-versus- slavery dialectic, freedom is the more morally justifiable position, as I'll explain.
Being a successful slavemaster requires one to be dishonest towards, be explotive of, and mentally, spiritually, and even physically hadicap their slaves in order to keep them in their oppressed, dehumanized state. Thus a slavemaster must see the slave as less than human, less than them*, worthy of the degraded, undignified state inflicted on them. Ensalving others requires contempt for if not full-blown aggression towards the enslaved. To be a bystander to slavery requires a partial, if not complete adoption of these clearly amoral beliefs and tactics, which a slave owner, or bystander of, blinds themselves to by putting their own interests first.
(*This is a reason enslavement of Africans was so prolific: it was easy to see them as less than human by non-African owners. It may be and probably is why prisioners are shabbily uniformed, given numbers and referred to as "offenders" and "inmates".)

The Dark Heart of Penolism- page 2
By Nate A. Lindell

To reject slavery and promote freedom, a person must be self confident, respectul of others, tolerant, take responsibility for supplying their own needsand wants. Such a person must be honest, fair, generous and work hard. Clearly, these valuesare preferable to those that must be adopted by a proponent or bystander of slavery.
"Then why, " you might ask, "is slavery in the form of prisions so popular in America?"
From a philosophical/ethical point of view, the answer is that, due to the desires of some for a quick or easy this or that, or for power, or for some other selfish reason, little, tiny excuses have been made by many individuals to tolerate a little bit of slavery, which collectively adds up to the whole lot of slavery known as the prision-industrial complex.
"You're overlooking the fact that prisoners have committed crimes" you say?
No. I'm not. First, most prisoners have committed crimes. Some, perhaps a lot, were setup, framed, or otherwise are wrongfully in prison. Possibly all prisoners are excessively sentenced - i.e., the sentence they received and the conditions they experience in their totality, are far in excess of the harms caused by their crime. Nor does punishing a criminal heal the victims of their crimes.
Well, the 13th Amendment permits slavery as a punishment for crime".
Correc, if- in the rare case- a criminal has been "Duly convicted". that is legally and properly convicted. The majority of prisioners were walked into quick and questionable plea bargains by over worked public defender attornies, or otherwise denied a fair and legal disposition of their cases. On top of that, the 8th Amendment prohibits cruel and unusual punishment, including a sentence that is disproportionate to the crime. I've yet to meet anyone in prison who's in there for kidnappin someone, putting them in their basement and degrading them in numerous ways for years. But that is what everyone sentenced to prison experiences.
Is it proportionate to sentence a car thief to years of dehumanization? What about a burglar?
If judged by the total amount of pain, misery and terror experienced, it's rarely going to be proportionate to subject a murderer to lengthy imprionment. Once someone is dead, they feel no pain (or pleasure). A murderer sentenced to life faces a lifetime of degradation, which causes more hurt that a swift execution. I intend to neither equate the murder with euthanasia nor promote death, but,say this to reveal the orrationality of degrading convicts.
Further from my observations, it is true for the majority of prisoners that they came from abusive, or at least neglectful families. Such is my own case, in the extreme. People like us were raised in misery and hopelessness, and the prison system happily continues the mistreatment. This, at best, toleration of the degraded fates of what has come to be millions of Americans is also an offense to common principles of morality. But what is even more immoral is that prisoncrats, who must realize wha tis happening, coolly continue the process, misusing their authority to deny rather than facilitate development of prisoners into complete humans.